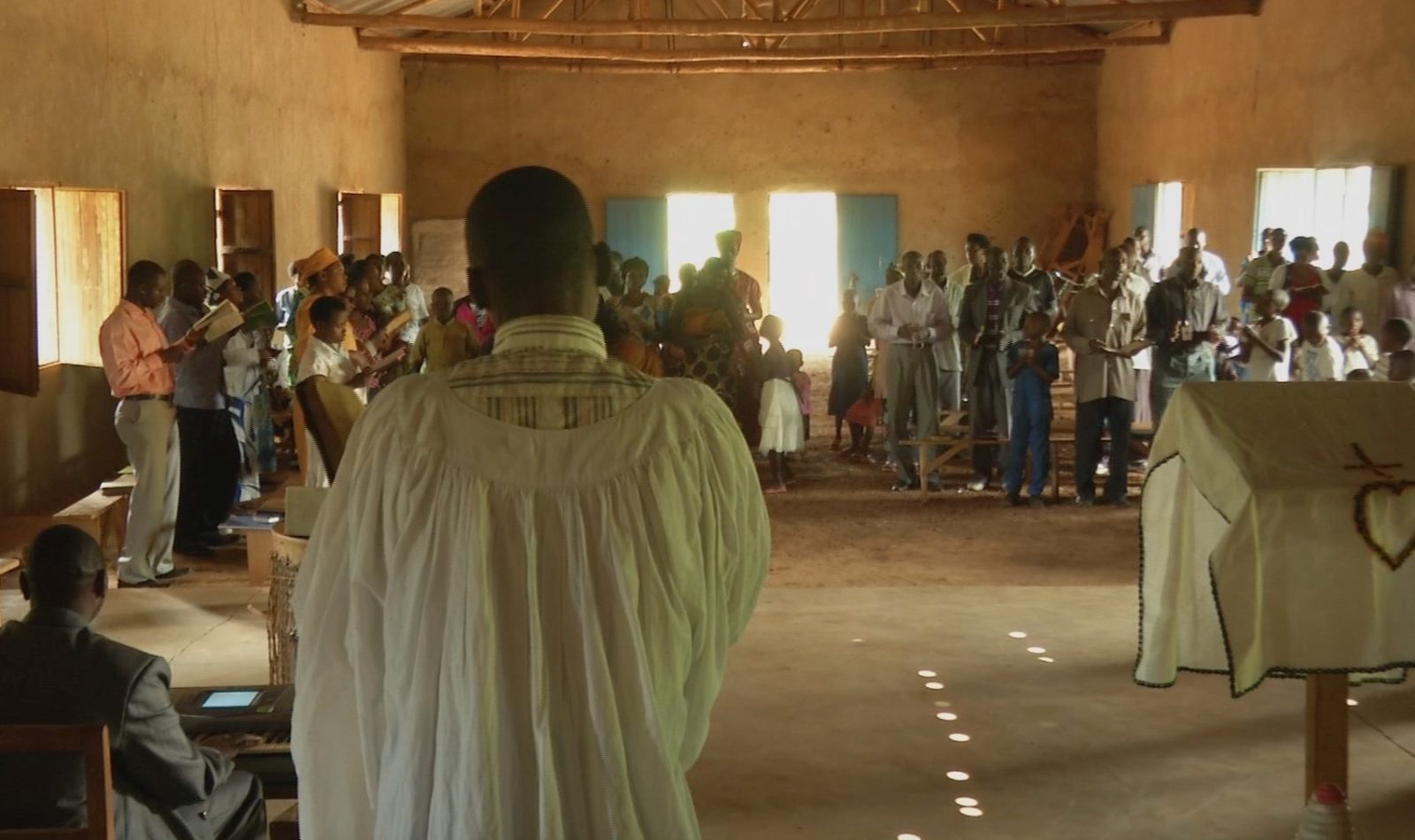 How many people are turning to their church as way to heal some of the hurt that the fighting has caused and renew their sense of faith.
Subscribe to Stories

BOB ABERNETHY: Several U.S. Jewish organizations this week pledged aid to Christian refugees who have fled Lebanon for Israel. An estimated 6,500 Christians left Lebanon when Israel withdrew its occupation forces. Many of the refugees were members of the South Lebanese militia, who feared retaliation by the Hezbollah forces. The refugees are currently quartered at a site near the Sea of Galilee and in other locations in northern Israel. United Jewish Communities and the Conference of Presidents of Major American Jewish Organizations pledged to send clothing, toiletries, and toys.

Six years ago, in an African country most Americans knew little about, tribal violence broke out on an almost unimaginable scale. It was Rwanda, and it was genocide. Eight hundred thousand people were killed in little more than three months. Now some previously small denominations are experiencing dramatic growth in the Hutu and Tutsi efforts to find reconciliation. Fred de Sam Lazaro has this special report.

FRED de SAM LAZARO: The Catholic Church has long been one of Rwanda’s most powerful institutions. It was brought by German and Belgian colonists to this landlocked nation and claims in its flock about two thirds of the country’s eight million citizens. And because it was the church for both Hutu and Tutsi, church buildings served as safe havens through decades of social unrest between Rwanda’s two rival ethnic groups. That changed in April 1994, when Tutsis once again sought refuge in churches like this one in Ntarama, urged on by the mostly Hutu soldiers.

Ms. DANCIL NEABAZUNGI (Through Translator): The soldiers, who were here to ensure people’s safety, told them to gather in the church so that they could guard them, but it turned out to be a trap to just make it easier for them to be killed.

Six years into a precarious coexistence, shell-shocked Rwandans are again flocking to churches, this time seeking spiritual instead of physical refuge. But the religious landscape, at least from outward appearance, has changed considerably. Dozens of new, so-called charismatic churches have emerged across Rwanda, many funded by European and North American sponsors. There are an estimated 300,000 Seventh-Day Adventists, for example. Rwanda’s Baptist churches claim about 400,000 members, up eightfold since 1995.

de SAM LAZARO: Twenty-nine-year-old Pastor Paul Gitwaza, a Tutsi, began this church barely one year ago. Today he draws about 7,000 enthusiastic congregants to Sunday service, which lasts about four hours.

Pastor BAHATI: I can say that Rwanda is an ambulance; it’s carrying sick people. Now people are looking where they can get a message that can heal their deep wounds, not a repetitive or a traditional beliefs which will not touch their heart.

de SAM LAZARO: More importantly, Pastor Bahati says new churches like his are bringing together Hutus and Tutsis, worshipping side by side, helping heal a nation whose ethnic division seems as baffling as it’s been brutal. To begin, the Hutu and Tutsi are virtually indistinguishable in physical features, language, or religion. Although there had always been class divisions, the colonial Belgian government decided in the 1930s to officially categorize the Hutu and Tutsi. They tried unsuccessfully to draw artificial distinctions between the two, according to Antoine Rutayisire.

Mr. ANTOINE RUTAYISIRE (African Evangelistic Enterprise): Everybody with 10 cows and above, he would be a Tutsi. Everybody with less than 10 cows, he’d be Hutu, which was very funny actually. You ended up having one brother being a Hutu because he has — he doesn’t have cows and another one becoming a Tutsi because he has cows. We still have those things around here even today, but I think that was kind of an administrative mistake.

de SAM LAZARO: Many historians are far more critical. They say the creation of a Tutsi elite, which enjoyed superior education and job privileges, bred resentment among the majority Hutu. A civil war began in the early ’90s, and when Rwanda’s Hutu president died in a suspicious plane crash in 1994, there was an all-out call for blood. Killers were allowed to take their victims’ belongings, and victims were easy to spot.

Mr. RUTAYISIRE: Identity cards were ethnically marked. So they would put your name — actually, not — this one has been changed because here’s where they put your name, and down here they would put your ethnic group. So they look at your identity card, and they find you are Hutu or Tutsi. If you are Hutu, you go. If you are Tutsi, you are dead. It was that simple. Actually, that’s why the genocide was so easy and so efficient.

de SAM LAZARO: What is not easy today and a major obstacle to reconciliation is the problem of bringing justice to the perpetrators of 800,000 murders.

Nationwide, about 120,000 suspects are awaiting trial in a country whose judicial system was also destroyed by the genocide. Giving them due process could take hundreds of years, so the government’s considering an expedited system that would parole or severely shorten the sentences of all but the worst violators. That’s raised concerns about vengeance and a renewed cycle of violence.

Reconciliation is the most urgent need in this spiritually hungry nation, and it is mostly being sought in the new churches, in makeshift church halls, in prayer gatherings, like this women’s group. Godleem Kiatessi says the fellowship has helped her cope with the loss of her husband and four of her five children.

Ms. GODLEEM KIATESSI (Through Translator): After the genocide, I really felt against God. I did not want to hear about God anymore. But coming to these retreats allows me to feel again the love of God, to see that what happened to me was not the work of God, but the work of man.

de SAM LAZARO: Experts say the smaller fellowships and support groups may be more therapeutic for grieving survivors and one reason why many like Kiatessi have left the larger, more traditional Catholic Church. Others allege Catholic complicity [in] the genocide may be driving people away.

Pastor BAHATI: Christianity weighed less and ethnic background weighed more. So that was the difference, and that is what — why the catastrophes took place in the so-called churches.

de SAM LAZARO: For their part, Rwanda’s Catholic leaders admit that many of their number, including some priests, likely were accomplices in the genocide and that many more failed to speak out.

de SAM LAZARO: So some priests, you say, are probably — were probably …

de SAM LAZARO: But, Father Augustine Karakezi adds, many priests were powerless to stop the genocide, and many themselves became victims. In his own backyard at Kigali’s Jesuit center, more than a dozen people were murdered. Karakezi is concerned by the finger-pointing at the Catholic Church.

Fr. KARAKEZI: All our institutions failed in this country: schools, university, army, churches, not only Catholic Church. I am disturbed by this kind of Machiavellic — the good one side; the bad. Who is innocent, by the way, in this situation? Who will claim the innocence?

de SAM LAZARO: And Karakezi says he fears some of the new churches may be raising false hopes for a quick fix. Reconciliation will be a long and complex process, he says, that will take a sustained social and economic rebuilding. Rwanda is one of the world’s poorest, most crowded nations. Eight million people occupy a land smaller than the state of Maryland; 70 percent of them live below the poverty line.

Regardless of the rivalries between the older, established churches and the emerging new ones, it seems certain that Rwanda will count on leadership from all of its churches if the peace is to last this time. For RELIGION & ETHICS NEWSWEEKLY, this is Fred de Sam Lazaro

Rwanda has traditionally had a very close affinity to the Catholic Church that was established by it colonial masters. During the previous wars, the churches served as a refuge for Hutu and Tutsi alike. That changed in 1994 when they were used as a way to gather people together to be killed in the genocide. Disillusionment with the Catholic Church has fueled the growth of other Christian denominations. In the reconciliation process, many people are turning to their church as way to heal some of the hurt that the fighting has caused and renew their sense of faith.