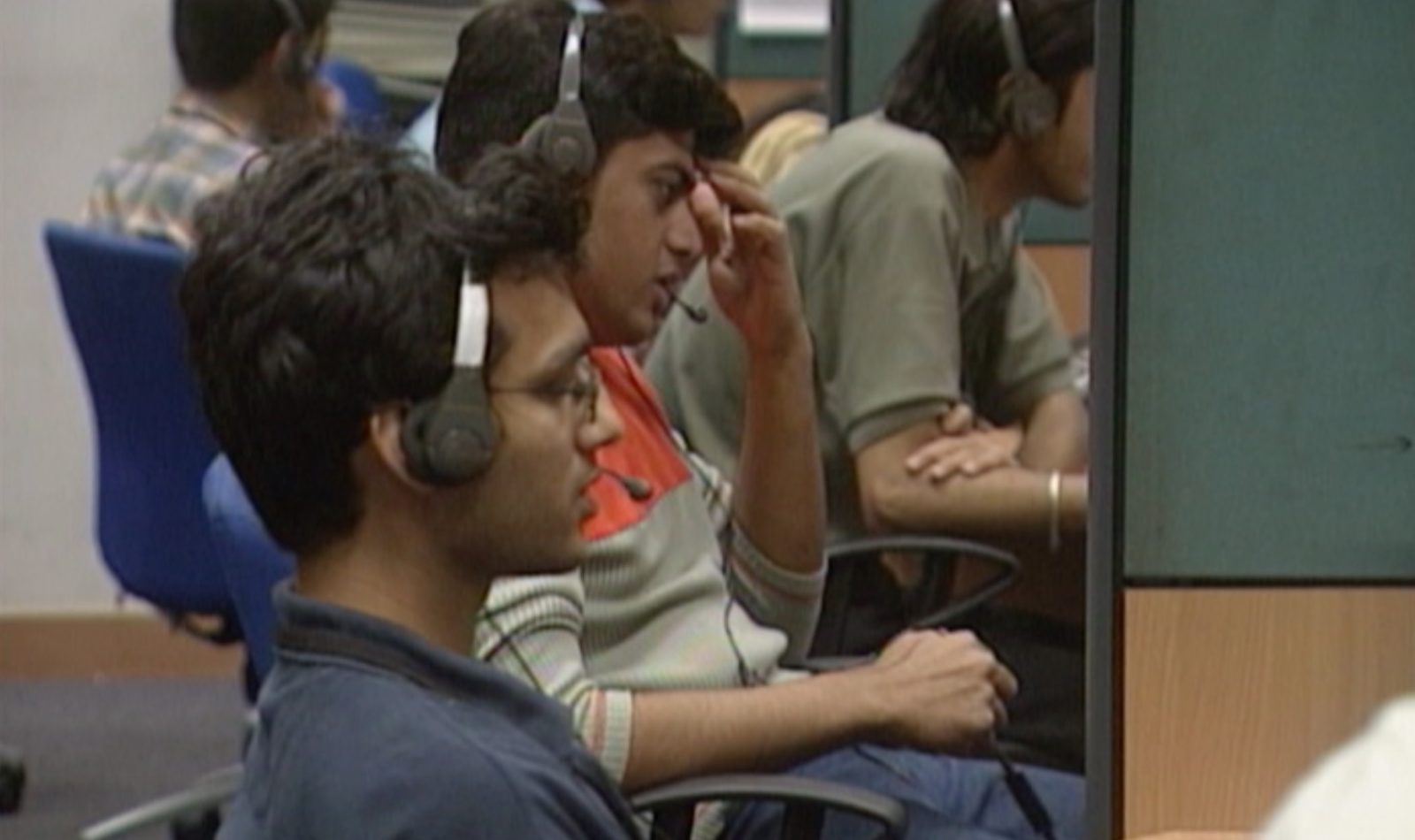 FRED DE SAM LAZARO: Bangalore may be best-known as India’s Silicon Valley, but these days, instead of perfecting their computer programming language, many young people are perfecting their English.

SPOKESMAN: The black bra and the CD recorder will be delivered by 6:00 PM Friday.

FRED DE SAM LAZARO: Bangalore is fast becoming the 1-800 capital of the world– at least the English-speaking world.

P. GANESH, Call Center Founder: In India, people have always been anglophiles. They love to learn… they love to actually learn more about other cultures, speak like them. It’s part of the fun.

FRED DE SAM LAZARO: It’s been much more than fun for P. Ganesh. Two years ago, he started a company called Customer Asset. It takes advantage or lower long distance rates and new technology that automatically forwards local or 1-800 calls dialed in America to operators in India. Ganesh recently sold the business to an Indian conglomerate for $20 million.

P. GANESH: If somebody had told me even five years back that this kind of industry would be possible in this kind of numbers, and these kind of things would be happening in India, I wouldn’t have believed it, that we would actually work with the housewife and consumer in U.S. and UK, sitting in India…

FRED DE SAM LAZARO: How many of you kids study English and like it?

FRED DE SAM LAZARO: The key asset in this land of one billion is an infinite supply of English- speakers, the legacy of British times and the modern-day colonial power, satellite TV.

LITTLE GIRL: I like to watch nickelodeon because there is many games on it– game shows and many cartoons and many good, good things.

FRED DE SAM LAZARO: The challenge is how to make their English readily understandable to non- Indians, how to neutralize an English richly flavored by India’s diverse tongues.

SPOKESMAN: So what does a Malayalam accent sound like? Thomas, why don’t you give us a small demonstration?

SPOKESMAN ( Heavily accented ): Why did the student go to the college? ( Laughter ) to gain some knowledge.

FRED DE SAM LAZARO: So even before they learn about the products they’ll be selling, call center hires begin with accent training.

SPOKESMAN: “Come da.” “Da,” that is a very common Bangalore colloquialism. You shouldn’t say colloquialisms in any form.

FRED DE SAM LAZARO: In a land where English is spoken with no speed limit, they are taught to slow down.

FRED DE SAM LAZARO: And to bite their lips.

FRED DE SAM LAZARO: Call center companies in India don’t like naming their clients in the West, where the issue of jobs going overseas is a sensitive one. They also cite competitive reasons. But many of the largest companies: from GE, to British Airways and Dell Computer– have set up their own call centers here, and they seem to take pains to make the calls sound as though they’re just down the street. Vivek Kulkarni is the information technology secretary for the state government in Bangalore.

VIVEK KULKARNI, Minister, Information Technology: For example, her local name will be Geta, where she will be known as Mary for the people in America.

FRED DE SAM LAZARO: Why do they make people say they’re from somewhere else for the American market?

VIVEK KULKARNI: They don’t really say that they’re from somewhere else. All that they say is the name which the other person is familiar with. The idea is that you finish the call quickly, you solve his problem quickly, the customer doesn’t have time to get into anything else.

FRED DE SAM LAZARO: But just in case a customer does want to engage in small talk, C.R. Suman says she studies the Internet for weather or current events, and can chat in her friendly, recently acquired American accent.

C.R. SUMAN: When it comes to the culture or the way they live, yes, we have done a lot of research. We have had a lot of training here. We had Americans come and train us for some time.

FRED DE SAM LAZARO: Customers don’t usually know they’re talking to someone overseas, and especially with telemarketing calls, don’t want to be talking at all.

C.R. SUMAN: They don’t like the sales calls too much. So we didn’t know about that. It was a whole new experience when they just sometimes put the phone down. You know, they just don’t even think of saying, “I’m not interested.” Just bang the phone down. It was like, “Oh, my God.”

FRED DE SAM LAZARO: Irate consumers don’t detract from the lure of these jobs. Unemployment and other professions is as high as 20 percent for college graduates. And the new customer service industry is helped by favorable exchange rates and is able to offer better pay than traditional professions. Veena Suwant has a graduate degree in architecture.

FRED DE SAM LAZARO: Obviously this was a more lucrative industry than architecture?

SPOKESPERSON: Yes, much, much.

SPOKESMAN: I’ve done one year of hotel management and would probably be working in hotel as a chef by now. I wanted to be a chef when I was young, so I make three times less than I make here.

SPOKESPERSON: I don’t have any hang-ups about being an MBA graduate and I’m working in a call center.

FRED DE SAM LAZARO: Although it’s considered a good career, call center workers typically earn just $200 to $250 a month. American and British companies moving their back offices here save up to 40 percent, and they’re moving in droves.

VIVEK KULKARNI: In fact, we receive every week one new foreign company here. We have been doing it for the last 104 weeks.

VIVEK KULKARNI: One foreign company which sets up base, which opens an office in that week.

FRED DE SAM LAZARO: India’s call center and back office business, which literally did not exist two years ago, is expected to earn $25 billion in annual revenues in just five years. That’s three times what the venerable software business brings in today.

As companies search for ways to reduce costs, one of the best ways is to move their back office operations to a place like India which is full of English speakers who are willing to work for much less than a comparable Westerner. One of the main challenges in this situation is not to find enough English speakers but to teach those that are employed to speak English in a way that can be understood by the people they are calling. This even goes so far as to change the name they will call themselves to make the call go easier.