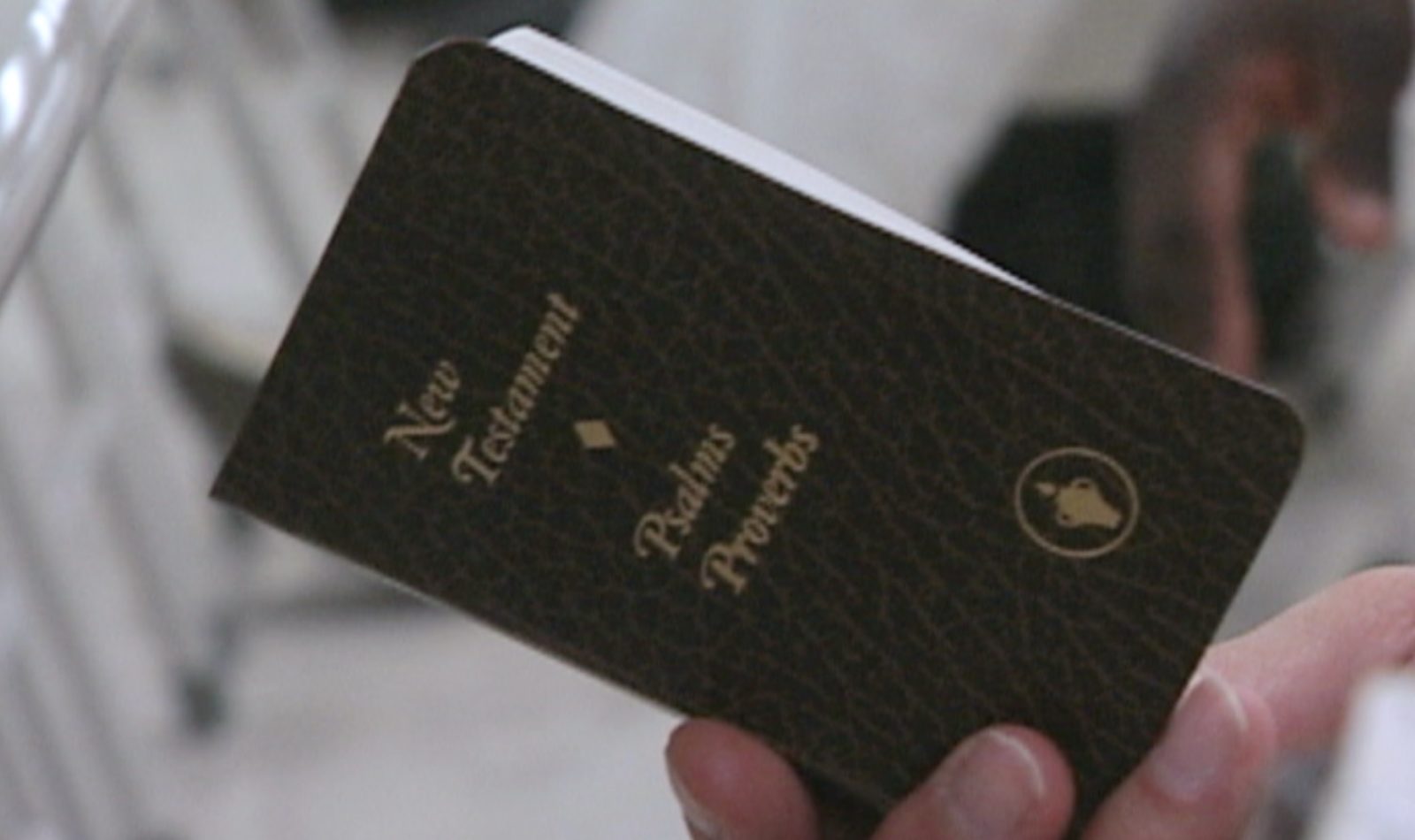 INMATES SINGING:I’ve got to feel the power of the holy ghost…

FRED DE SAM LAZARO:It’s called the Inner Change Freedom Initiative. Supporters say it is the most promising idea in years to reform the lives of prison inmates.

INMATES SINGING:Deep down in my soul.

FRED DE SAM LAZARO:Some 250 offenders, three-quarters of all the men at this Texas prison, belong to the rigorous 24-seven, bible-based program intended for those within 18 months of their release date. It is run by Prison Fellowships, a ministry founded by Charles Colson. He’s the former Nixon aid who himself underwent a conversion while in prison for his role in the Watergate scandal. Colson was invited to start the program in Texas, by then-Governor George W. Bush.At this minimum-security prison just outside Houston, the day begins at 6:30 A.M.

PRAYER GROUP LEADER:Stay prayed up so we don’t get laid up. Trust in God and he will see us through. I mean that brothers. I love you. (Applause)

PRAYER GROUP LEADER:They almost always have a rationale for it. “It was my hereditary, it was my environment.” “My dad’s in prison.” “My uncle’s in prison.” You can’t cop out with that.

JERRY BRYAN:Look at Lucifer in heaven. How was his environment? It was perfect. He was living in heaven. But he had a will and he exercised that will negatively toward God.

FRED DE SAM LAZARO:The frequent roll calls are a reminder that this is a prison. But inmate Chris Marache says the positive atmosphere around him and his new-found faith, have torn down the prison walls.

CHRIS MARACHE:Everybody coming up to me, hugging me, telling me we’re glad to have you here, just… I feel a strange type of love. But I’m free. I’m freer than most people that are out in society right now.

PATRICK DEL VECCHIO:I want to get involved in children’s evangelism before they get old enough to get locked up. You know what I mean?

FRED DE SAM LAZARO:To keep men like del Vecchio from being locked up again, training is offered in computers, life skills, or a high school diploma, if needed. On release, they are given a job, mentoring and counseling, all paid for or arranged by prison ministries. Rosario Claudio, recently released from prison, says the program has helped him work toward a better future.

FRED DE SAM LAZARO:The Inner Change Program, begun at this Texas prison in 1997, has been copied in three more states. Colson says it’s effective and timely. He claims it’s a bulwark against terrorism.

CHARLES COLSON:There is a great danger in the prisons, and I have seen this firsthand, of radical Islam taking a real hold. People in prisons are very alienated from society, very angry, most of them. If they can get a Christian influence, where we’re taught to love the Lord with all our heart and mind and soul, and love our neighbor as ourself, I think that’s a great thing.

FRED DE SAM LAZARO:However, critics, like Barry Lynn, who heads the group Americans United for the Separation of Church and State, say a bigger danger is to the Constitution. A lawyer and ordained minister, Lynn says prisoners who want to be rehabilitated must first embrace specific religious beliefs.

REV. BARRY LYNN:When Chuck Colson talks about Christianity, it is a fundamentalist, biblical literalism that he’s preaching. He has every right to promote it privately. He has no right to expect that the government of Texas or anyplace else is going to help him promote it in their prisons.

FRED DE SAM LAZARO:If the Nation of Islam, for example, were to come in tomorrow and say we have a program we think will work, let us into Carol Vance to run a parallel program. Would that appease you in any way?

REV. BARRY LYNN:If there was a genuinely free voluntary choice between perfectly fine secular programs and a variety of programs that reflected the different religious and philosophical outlets, I would not have nearly as much problem as I’ve got today. Ironically, though, even to get Muslim clerics into prisons as chaplains, has become very difficult in many prisons because what they really want are people from the Christian community.

FRED DE SAM LAZARO:Lynn’s group has sued to block the Inner Change program in Iowa. That state, unlike Texas, helps prison ministries pay for the program by charging all inmates, not just those in the program, a fee to use the telephone.Iowa officials argue that phone revenue supports only non-religious parts of the program, like job training, not the ministry. State officials say the goal is to keep men out of prison. And Mark Earley, president of Prison Fellowships, says it’s working.

MARK EARLEY:In the state of Texas just recently completed a study in February of this year, which they released, showing that of all the inmates that had been through our program, that the recidivism rate was eight percent. That was compared to 22 percent of the closet control group they could find, and about 50 percent of the recidivism rate of the general population.

FRED DE SAM LAZARO:Barry Lynn says the study is of a motivated group of prisoners that’s less likely to re-offend anyway. In any event, he adds, you would expect success.

REV. BARRY LYNN:If the choice is between a program that does nothing for you, as we’ve found in Iowa, or a program that helps you stay in touch with your family, keep grounded in the community and guarantee you a job afterwards, of course you’re going to do better if you have all those benefits.It seems to me that corrections officials ought to offer it to everyone, not just those people who choose to undergo a religious conversion on the way to getting these benefits.

PROF. IRA LUPU:It means everyone in the prison has a chaplain to go to, either of their own faith or someone who would be sympathetic. But those who will be committed to this form of evangelical Christianity will have something very different: More intense, more serious, more committed, more opportunity, more resources.

FRED DE SAM LAZARO:Colson insists the opportunity and resources of Inner Change are open to all. He does acknowledge that they must attend the bible-based program and a Christian church.

CHARLES COLSON:To me, it’s an invitation. And if people are interested, that’s fine. And if they’re not, then there’s nothing else to be said.

CHARLES COLSON:No, not a failure on our part at all. God’s the only one who does the converting. And I’ve never converted anybody in 30 years now that I’ve been a Christian.

FRED DE SAM LAZARO:But you’re not ambivalent about the direction these men take.

CHARLES COLSON:Of course not. I mean, I believe there’s… that’s what a truth claim is. Everybody has truth claims. The problem in our society today is if you express them, you’re looked upon as bigoted. For heaven’s sakes, the beautiful thing about a pluralistic, tolerant society is we can all express our truth claims in the marketplace of ideas and let truth emerge.

INMATES SINGING:I’ve got the healing power of the holy ghost…

FRED DE SAM LAZARO:Assuming it passes muster in the courts, prison fellowship does seem to have a leg up in that marketplace. It is a prolific fund-raiser and the Inner Change program appears to have the support of the president, who has called for more faith-based social programs.

A prison in Texas has adopted a program that uses bible study as a way to help convicts reform their ways and keep from committing more crimes. The program has been criticized by some groups though because it uses a very specific type of Christianity and does not offer any other kind of denominational support.