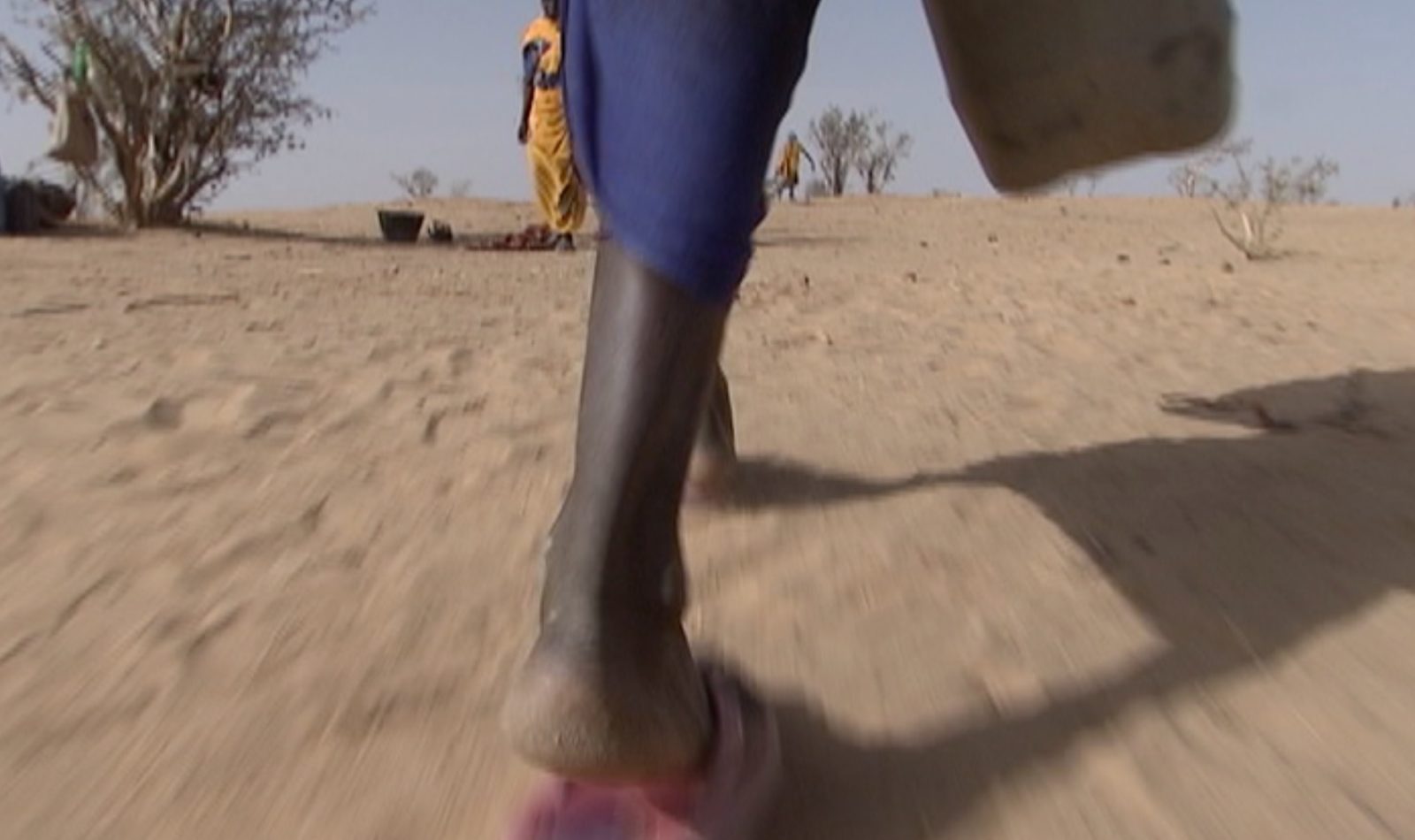 FRED DE SAM LAZARO:For 15 months, more than 100,000 people have trekked across some of Africa’s most forbidding terrain to reach safety in eastern Chad. They arrive in small groups, bringing stories of rape and other atrocities committed by people they call Arabs — allegedly supported by the Sudanese government — in neighboring Sudan’s Darfur region. Another one million so-called “black” Sudanese who have been displaced from their homes remain in Darfur. Human rights groups back up their accusations of ethnic cleansing even though Darfur has been mostly closed to the outside world.In the relative safety of Chad’s refugee camps, the day usually begins around 5:00 am. Women like Jamila Numere start a daunting pursuit of life’s most basic needs. Water comes from a hastily dug, shallow well.Behind the people at the well are donkeys, prized beasts of burden. But their needs must come second. There’s simply not enough water to go around. The stench of death is everywhere. One of relief worker Gillian Dunn’s top priorities has been to burn thousands of animal carcasses.

GILLIAN DUNN:We work six days a week picking them up, but it… you know, it’s very difficult work. It’s… they’re strewn out… there are so many all over the place, and people keep calling us to come to their homes and to pick up their donkey that has just died or that’s dying.

FRED DE SAM LAZARO:Dunn’s group, the International Rescue Committee, is one of the few relief agencies that’s reached this isolated camp in Bahai, located steps from the Sudan border.

FRED DE SAM LAZARO:So this is Sudan right over there, huh?

FRED DE SAM LAZARO:Miserable as life seems for refugees like Jamila Numere, she’s among the more fortunate who’ve managed to escape. She walked for four days to reach this camp with her mother, sister, and two young sons.

JAMILA NUMERE (Translated):I was with my husband at home, and then when the planes started to bomb, he just disappeared. In the panic, we just ran, you know, in every direction, and I haven’t heard news from him since then. I think that either he’s dead or he was arrested and taken to jail or kidnapped. He was a teacher.

FRED DE SAM LAZARO:Everyone in the camp has a horror story, including suffering from aerial bombardments. And they blame the Jinjaweed, Arab militiamen.

MAN (Translated):The militia, they take our children, burn our houses. They’re killing us because we are black.

FRED DE SAM LAZARO:The government in Khartoum, which has denied any involvement with the militia, has drawn widespread international condemnation for human rights abuses and for not allowing relief agencies into Darfur.Some roots of the Darfur conflict lie in the long-running war in the country’s South. It’s all but impossible to reach the conflict zone in western Sudan, but it is possible to see the legacy of this country’s brutal civil war by flying South. Here the remnants of a two-decade war scatter the landscape. Two million lives have been lost in a battle over oil reserves between Christian rebels in the South and Arab Muslims who govern the country from Khartoum in the North. The conflict in western Darfur also began when black Sudanese leaders there began demanding a share of the oil revenues for that region. Michael Lado, with the Southern People’s Liberation Movement, says Khartoum has targeted not just Christians but all black Sudanese.

MICHAEL LADO:They say a Muslim cannot kill a Muslim, but now they are killing Muslims. So they are not after the religion. They are after to finish the race, the black race.

FRED DE SAM LAZARO:The Bush administration has brokered peace talks over the past two years, and they have brought a nervous calm to parts of the south.But the international community has largely ignored the latest conflict in the Darfur area, according to Alphonse Malanda, who heads the U.N. refugee agency in neighboring Chad.

ALPHONSE MALANDA, U.N. Refugee Agency:We are of the view that the Darfur situation has been… maybe ignored, but also deprioritized. When we look at the overall peace process in Sudan since it started between the South Sudan and Khartoum, Darfur issue has been deprioritized.

FRED DE SAM LAZARO:He says the failure to intervene or get humanitarian aid into Darfur is also triggering a major crisis in neighboring Chad, one of the world’s poorest nations. So far, the UN has managed to settle about 40,000 people into sturdier shelters, but almost twice that number remain in makeshift shelters nearby. They are precariously short of food.

GILLIAN DUNN:And they’re running out of things that they brought from Sudan, so people are reverting to other mechanisms. They’re eating berries that usually are eaten only by goats. They’re selling whatever they have in the market. They’re doing little, you know, small enterprise projects to get some money to buy some food. But every day it’s a struggle just to find food and water.

FRED DE SAM LAZARO:For most refugees there’s little time to dwell on the immense trauma they’ve endured. One of Jamila Numere’s sons died on the way here of dehydration. His surviving sibling displays many hallmark signs of malnutrition. Many of her relatives died earlier in Darfur, yet her biggest worry is survival.

JAMILA NUMERE (Translated):At this point I’m not even sure I will have food at the end of the week, if I will receive any food assistance. So far I’ve been collecting wood and water and selling it in a nearby village to buy food.

FRED DE SAM LAZARO:After two days of standing in line, she finally managed to register on a list with a relief agency working for the U.N. She and relief workers can only hope it will get her into a more secure tent some day soon.Tough as it is to work in temperatures that reach 110 degrees during the day, refugee agencies worry that things are about to get a lot worse. Starting in early June, the rains arrive. This river can be expected to overflow its banks. It would flood the neighboring refugee settlements, and what roads there are to this area become impassable.Public health problems have so far been mostly treatable — problems of poor sanitation and polluted water.But Camilo Valderrama, a physician with the International Rescue Committee, worries about the coming rains.

CAMILO VALDERRAMA, International Rescue Committee:You see people living under trees. They have no cover at all. And my big worry is that if the rains come, we’ll have malnourished children that are very prone to infection, and with this dripping water all the night, I would be with, I know, hundreds of children with pneumonia, and that’s a very tough thing to… to deal with when it’s so many people around.

FRED DE SAM LAZARO:And U.N. officials say the situation in Darfur is likely much worse than in Chad’s refugee camps. They’ve appealed for $150 million. Jan Egeland is the U.N.’s undersecretary for humanitarian affairs.

JAN EGELAND, U.N. undersecretary: Additionally to the appeal to the government to say, “Stop, help stop what is happening, help stop the human rights violations.” We have to appeal to the international community to help fund a massive relief operation because we cannot let a million people starve, we cannot let tens of thousands of people perish when we know in advance that there will be starvation unless the food comes and unless the medical supplies and the water and the sanitation flows.

FRED DE SAM LAZARO:UN officials report some progress in getting survey teams into the Darfur area, but so far they say, the efforts at fundraising and relief are well short of what’s needed.

Refugees from the Darfur region of western Sudan have fled across the border into Chad to escape alleged ethnic cleansing in their war-torn country.