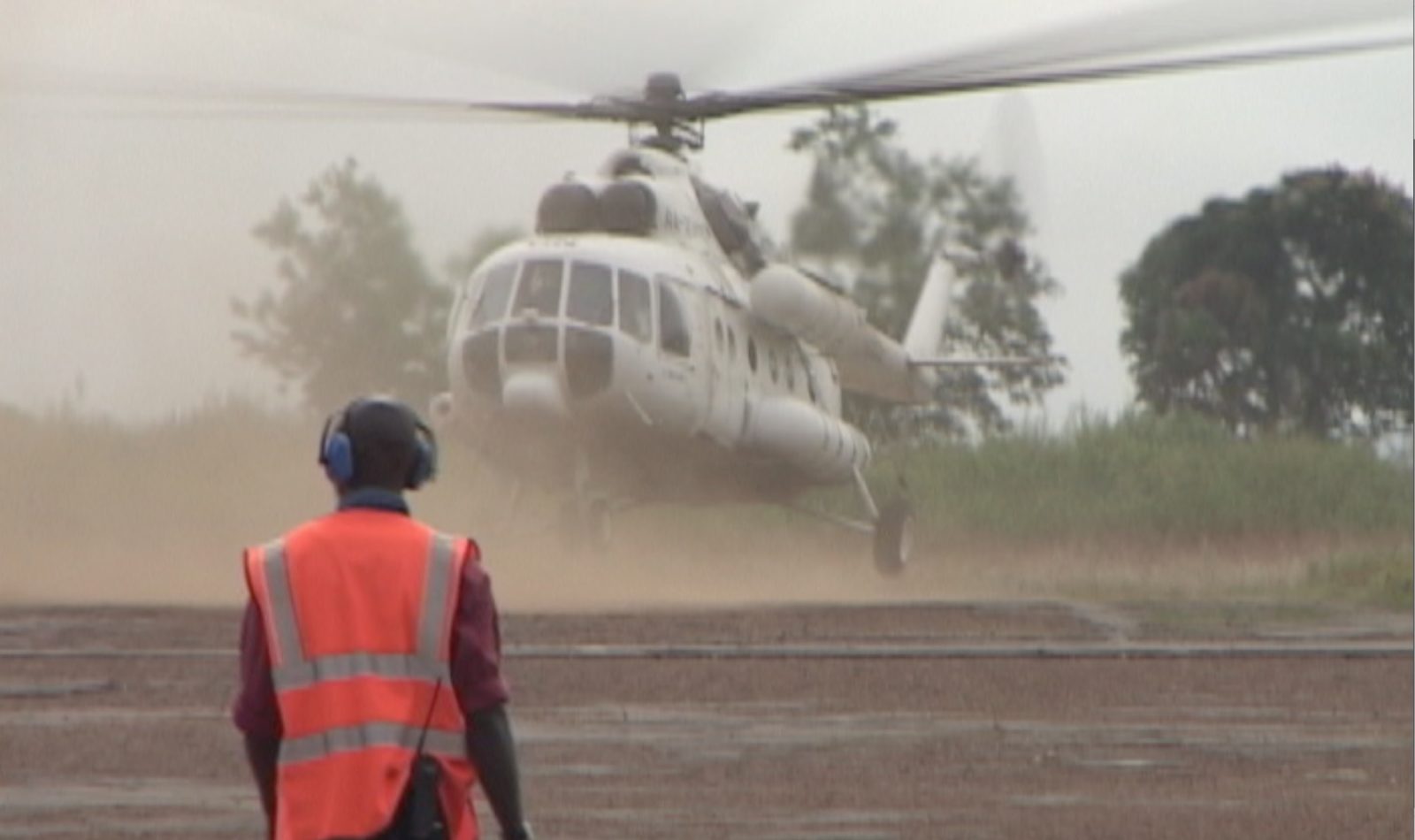 Truth and Justice in Sierra Leone

FRED DE SAM LAZARO: Sierra Leone is trying to come to terms with the brutal civil war that began in 1991 and only ended last January.

Helping them is David Crane, appointed by the United Nations as prosecutor for a special war crimes court.

DAVID CRANE, talking to a group of people: I can assure you that I am an international independent prosecutor. I work for no one other than you.

FRED DE SAM LAZARO: Crane is a native of North Carolina. Ironically, many of the people he represents are descended from freed slaves who settled here after escaping the Carolinas and Georgia 200 years ago.

DAVID CRANE: And my promise to you is to prosecute those who bear the greatest responsibility for the tragedy that took place here in Sierra Leone over the past ten years.

In all, 75,000 people were killed, and about two million, almost half the entire population, was displaced from their homes.

Twenty thousand civilians were randomly targeted for mutilation by all sides of the conflict, many by limb amputation. One victim was Alusine Conteh.

ALUSINE CONTEH: The hand is took. They slashed it like that.

ALUSINE CONTEH (Translated): They first used the axe to chop the left hand off. After that, they wanted to chop the other, and this little boy started crying and said, “please, soldier, don’t cut off my poppa’s other hand.”

So they said, “let this woman remove this child from her back. We’ll chop off his arm.” And I said, “no,” and they decided to chop the other hand off.

FRED DE SAM LAZARO: So they basically said you could have your right hand if you gave your son’s hand?

FRED DE SAM LAZARO: Many of the soldiers were children abducted into the notorious revolutionary united front, the rebel force. Sorie Sheriff managed to escape combat duty. He did hard labor with his father, who died when they tried to escape.

SORIE SHERIFF: He want to run. He halts my father, say, “stop!” My father no stop. Shoot him here.

FRED DE SAM LAZARO: You witnessed this? You saw this?

FRED DE SAM LAZARO: With diamonds, gold, and bauxite, Sierra Leone should be as wealthy as it is picturesque. Instead the natural abundance has meant only tragedy and genocide.

DAVID CRANE: This civil war wasn’t caused by a political vision or for religious reasons or for ethnic reasons — not that that excuses war crimes or crimes against humanity.

FRED DE SAM LAZARO: As they have for decades, thousands of young men dredge and sift gravel in the diamond-rich eastern region. Few of these freelance prospectors ever find much. The big payoffs have always gone mainly to foreign dealers working with the political elite that has controlled the official trade.

Today this former British colony has the world’s lowest per capita income. Two thirds are illiterate, their plight worsened by the fighting. The war began in this region a decade ago, when the RUF rebels, backed by neighboring Liberia, fought the government and army for control of the diamond trade, which in turn fueled arms purchases.

SPOKESMAN: This is for antitank.

FRED DE SAM LAZARO: Finally, late in 2000, after smaller West African and U.N. peacekeeping forces failed to stop the carnage, British troops began to restore calm, paving the way for a massive U.N. deployment which completed disarming the combatants in January 2002. Today, some 17,000 international troops patrol in Sierra Leone. In early December, the U.N. also swore in the international court to try those most responsible for the killings.

JUDGE GEOFFREY ROBERTSON: I think the world is moving towards the position that there can be no lasting peace without a measure of justice, and that the reason why we are, in a sense, parachuting in a justice system, international judges to deal with particular crimes, is that there are certain crimes that are so heinous that they diminish us all as human beings.

FRED DE SAM LAZARO: Unlike similar tribunals for Rwanda and Yugoslavia, this one is located in the country where the crimes were committed, invited by the leadership. Pres. Tejan Kabbah was first elected in 1996, deposed in a coup a year later — then reinstated by a Nigerian-led troop intervention.

PRES. AHMAD TEJAN KABBAH: The main reason for the whole exercise is really to make sure that people see and understand that if they behave in the way they behaved here in the recent past, then it will all catch up with them. That’s the message. It’s not a question of retaliation or vengeance, no.

FRED DE SAM LAZARO: With limited resources and thousands of perpetrators, the court will only try about 20 of the war’s kingpins. Most of the others accused will appear before a truth and reconciliation commission. It will offer amnesty in exchange for confessions. Sierra Leone’s truth commission follows a concept first tried in post-apartheid South Africa. Dr. Alex Boraine served on that body, and now runs an Institute for Transitional Justice in New York.

DR. ALEX BORAINE: I think the idea of having the truth commission as well, not only for the victims to come and tell their stories and to seek answers, but also for perpetrators to be reintegrated into society so that they don’t feel they have to go back into the bush and pick up their guns and kill all over again.

SPOKESMAN: You can talk to anybody in the commission…

FRED DE SAM LAZARO: The truth commission held its first meeting recently in Bamaru, a village on the Liberian border where the civil war began. Villagers fled when the firing started, and returned when it was over to bury 15 people who couldn’t escape. “We don’t care whether or not the perpetrators are brought to justice,” a village elder told us. “It’s between them and their God.”

Residents said their biggest wish is for peace in this precarious setting, a stone’s throw from the Liberian border. Sierra Leonean soldiers stand guard here, some themselves former RUF rebels. Keeping soldiers loyal is considering key to keeping the peace, especially when the court begins continue to indict suspects, many of whom remain powerful players.

They include current Defense Minister Hinga Norman, whose faction, the Citizens Defense Force, like the rebels, is widely accused of atrocities. Norman says there may well be renewed instability and social unrest if the court is perceived as unfair.

FRED DE SAM LAZARO: So you think that the prosecutors should take into account the potential destabilizing effects?

HINGA NORMAN: I believe that they do take that. I believe. It is my belief that such mature people cannot just go riding high without thinking that it could be.

FRED DE SAM LAZARO: However, Judge Robertson says to fulfill its mandate of dispensing justice, the court must work strictly off evidence, with no regard for potential consequences.

JUDGE GEOFFREY ROBERTSON: There will always be preference for doing deals, for allowing the torturers and tyrants to leave the bloody stage with amnesties in the back pocket, with their Swiss bank accounts intact. But that seems to me to be yesterday’s argument. It’s for those who are in charge of what, touch wood, is the improving security position in this country, to look after. And indeed, those who do seek– if any do– to drag this country back into barbarism will themselves face trial, perhaps before this court or a successor.

FRED DE SAM LAZARO: The U.N. may have brought a precarious peace, but little long-term economic improvement. Despite efforts to certify and tax diamonds, official estimates are that 60 percent of them are still smuggled to neighboring countries for export to the world markets. And there have even been recent reports by the Washington Post, among others, that island al-Qaida to the diamond business.

Following its implication in the bombing of U.S. embassies in East Africa, the terrorist organization sought a safe haven for its assets. That haven was reportedly vast quantities of West African diamonds purchased in the late ’90s. Day to day, many ordinary Sierra Leoneans say it’s not the fight against terrorism, or even retribution for the crimes against humanity that’s on their minds — rather, it’s how to meet life’s most basic needs.

ALUSINE CONTEH ( Translated ): We have nothing. We have no medicine for the children. If they need medicine, we have to beg on the street.

FRED DE SAM LAZARO: Sorie Sheriff is a good student and wants to become a doctor, but he’s not sure he’ll get past sixth grade, since his mother cannot afford the tuition. For many young people, businessmen Andrew Kromah says soldering remains the only option.

FRED DE SAM LAZARO: Prosecutor Crane says that instability is just one reason Americans should be concerned. The other is the diamond trade.

DAVID CRANE: It does affect the American people, because we are in fact one of the major purchasers of that commodity. I’m not sure of the exact number, but it is well within the 70 percent. And so the American people need to understand that a diamond is a wonderful gift, but one has to remember that some of those… the origins of some of those diamonds may be, in fact, coated in blood.

FRED DE SAM LAZARO: Crane will not disclose his specific timeline, but the first indictments are expected in the next few months.

The devastated nation of Sierra Leone struggles to recover after a brutal decade-long civil war.