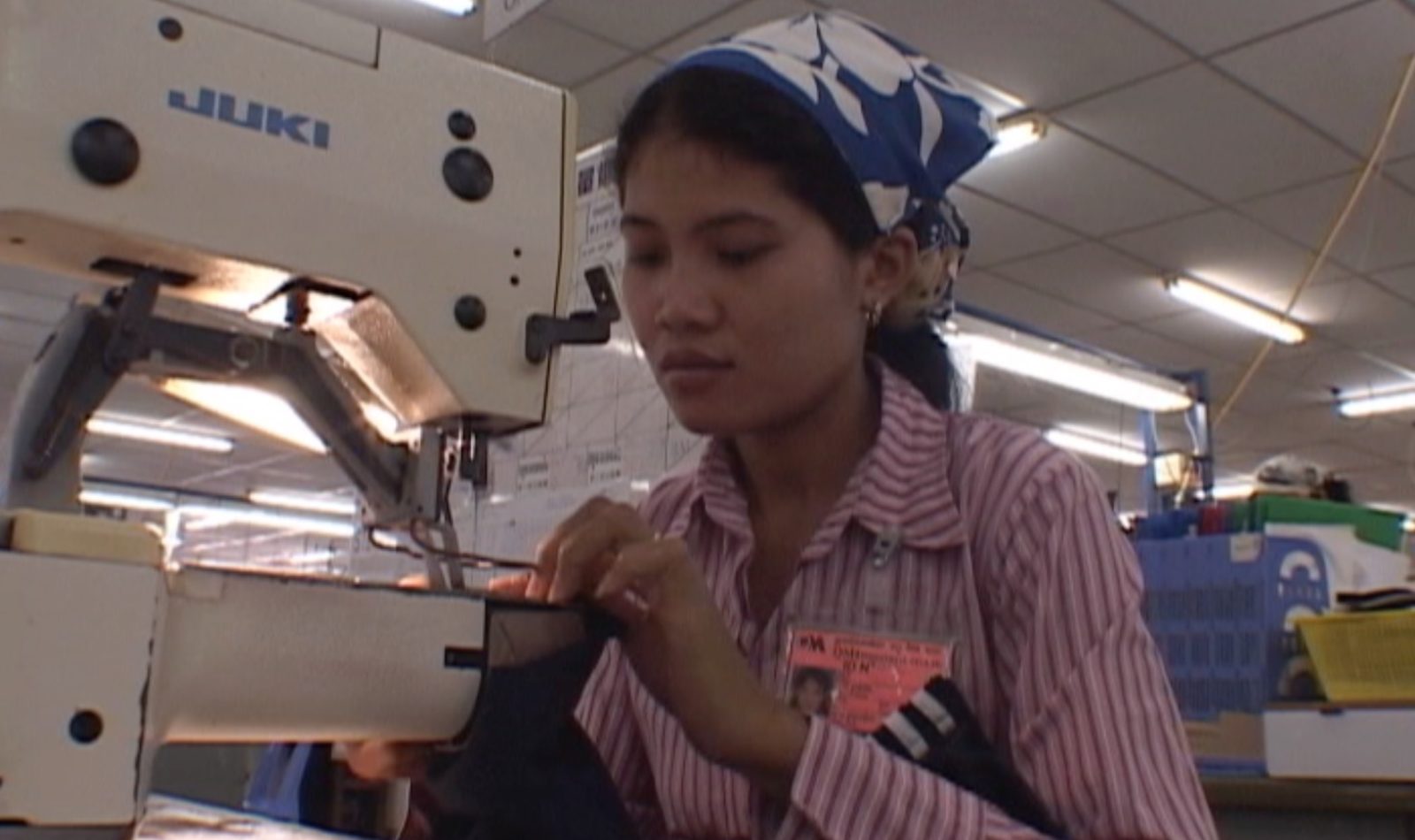 FRED DE SAM LAZARO: Cambodia is one of the word’s poorest countries. It is still feeling the impact of the war in Southeast Asia and of genocide in the ’70s that claimed up to two million lives, perhaps a fifth of the entire population. About eight years ago, Cambodia began a comeback, centered largely on making garments for the American and European markets.

Clothing exports now bring in about 80 percent of Cambodia’s export earnings. But all that could change beginning in January when a new free trade system takes effect. Jan. 1 will mark the end of an elaborate system of quotas, first designed to protect U.S. jobs but which also guaranteed Cambodia and other nations space on American clothing racks. Sebastien Teunissen is a business professor at the University of California Berkeley.

SEBASTIAN TEUNISSEN: It’s not one quota per country. It’s, in fact, one co-a for each type of garment. So there’s quotas for socks, there’s quotas for pants, shirts and so on. It’s a very, very complex set of numbers. I think it’s well over a thousand different limits when you look at the number of countries and garments involved.

FRED DE SAM LAZARO: The end of the quota system is welcome at retailers like San Francisco-based Gap. It imports a billion pieces of apparel from 50 countries each year for its Old Navy, Banana Republic, and Gap stores. Gap’s Dan Henkle says quotas have complicated life for the company’s buyers.

DAN HENKLE, Gap: You might have a product category that you… you would ideally like to place with one vendor, one factory. But maybe because of quota restrictions you have to split that order apart. And you might have 10 percent over here and 50 percent over here. And I think in a post-quota environment, you’re going to see that we are going to be able to consolidate some of that… some of those orders and overall I think that will lead to greater efficiency.

FRED DE SAM LAZARO: It is also expected to lead to major changes in where clothing is made. Over the past 40 years, the U.S. has set aside rack space for many developing nations from Mongolia to Lesotho to Cambodia. Experts say countries with large industrial bases and labor pools especially China, could now dominate. That could cost millions of jobs in the smaller nations. Jobs critical to most countries, says Professor Teunissen.

SEBASTIAN TEUNISSEN: It’s not stated so obviously but it’s considered in a way to be foreign aid. That is by granting quotas to less developed countries, you’re giving them the opportunity to establish production facilities there, employ people, generate incomes, generate foreign exchange and it’s viewed as therefore helping the economy of that particular country grow.

FRED DE SAM LAZARO: With Cambodia U.S. officials used the quota system to address widespread concern over child labor and other abuses in factories overseas. In 1999, the U.S. offered Cambodia a deal. It would increase its imports of Cambodian garments; in exchange, Cambodia would have to improve working conditions in its factories, introduce a minimum wage, recognize unions and open its factories to international inspectors. Cambodia’s commerce minister, Cham Prasidh, negotiated with the U.S. He says almost overnight a garment industry still in its infancy took off.

CHAM PRASIDH, Minister of Commerce, Cambodia: Since 1996 until this year, it’s almost eight years the number of factories have grown from zero to over two hundred factories. Actually, they are employing about 235,000 workers.

NOU CHARYA: We make good money in the factory. We can make as much as $70 a month. We share our money with our mother and it allows our younger brother to attend school.

FRED DE SAM LAZARO: Life here is Spartan by any account. The sisters share a 100-square-foot room with two others. There’s little margin for luxuries. $70 may seem meager, especially since it includes overtime pay, but it’s still twice what an average civil servant earns in Cambodia.

At the factory, these women — and most workers are young women — are guaranteed a minimum wage: $45 a month. They are represented by a union and work in a well-ventilated space. Factories that violate labor standards can lose their export licenses and the International Labor Organization– a U.N. agency– is free to visit unannounced. While it’s hard to monitor all factories, the ILO’s Ros Harvey is encouraged so far.

ROS HARVEY: We’re seeing that basically child labor has effectively been eliminated from the industry. There’s no forced labor. There is also, I think, the freedom to organize.

FRED DE SAM LAZARO: And, she says, from all indications, the improvements do not cost the bottom line.

ROS HARVEY: We’re finding that it’s not a tradeoff. That you can improve working conditions and at the same time improve profitability, quality and productivity.

FRED DE SAM LAZARO: The problem is Cambodia’s costs are still 25 percent higher than China’s. Unlike China, Cambodia has to import its textiles and raw materials. The transportation system isn’t as good. It’s also slowed down by corruption and red tape in a business where timely deliveries are critical. On the top floors and in worker homes, there’s great anxiety.

FRED DE SAM LAZARO: Plant closings would also dash the hopes of their 17-year-old sister who plans to find factory work when she comes of age. For young, uneducated women, there are few other places to find work. For many, commercial sex districts are a desperate last resort. For his part, Cambodia’s commerce minister says his country can retain its customers, even get new ones by branding itself as the socially responsible place to buy garments.

CHAM PRASIDH: We try to develop a new image of Cambodia as a safe haven for the major brand names in the world. We guarantee that any garment or apparel that we produce from Cambodia are not from sweatshops.

FRED DE SAM LAZARO: That’s certainly attracted the Gap, which buys almost a third of all Cambodian garments. In the ’90s, Gap was the target of protests over its alleged use of sweatshop suppliers.

FRED DE SAM LAZARO: Gap acknowledges there were and still are problems. It says it’s working to police factory conditions. It has a staff of some 100 labor compliance inspectors. While cost is critical in choosing suppliers, the company says it also factors in social issues. So Dan Henkle, who is vice president of compliance, says in recognition of its progress, Gap will continue to do business in Cambodia.

DAN HENKLE: We are making an investment in this. And certainly if you’re holding vendors accountable for paying overtime premiums and wages and so on and so forth, the appropriate wages, there’s a cost associated with that, but you have to look at this in terms of the benefit as well, the benefits on productivity and quality and overall reliability.

FRED DE SAM LAZARO: Several other retailers who buy in Cambodia have said they plan to continue. The approach may also carry a positive marketing message, but UC Berkeley’s Teunissen wonders how long the buyers can keep their pledge.

SEBASTIAN TEUNISSEN: In the short run, those are probably honest statements. But in the long run, the realities of the marketplace may force them to reconsider it. If the competitors have moved to China as their sole source of supply are able to undercut them in price, then they may have to do so as well.

FRED DE SAM LAZARO: To make its clothing cheaper, Cambodian officials will soon ask the U.S. to add Cambodia to a list of African countries which are allowed to export goods to the U.S. without the tariffs normally charged to other nations, including China.

Cambodia is preparing for major changes in global trade.  The country will move away from an elaborate system of quotas first designed to protect U.S. jobs but which also guaranteed Cambodia and other nations space on American clothing racks, and will implement a system of free trade.