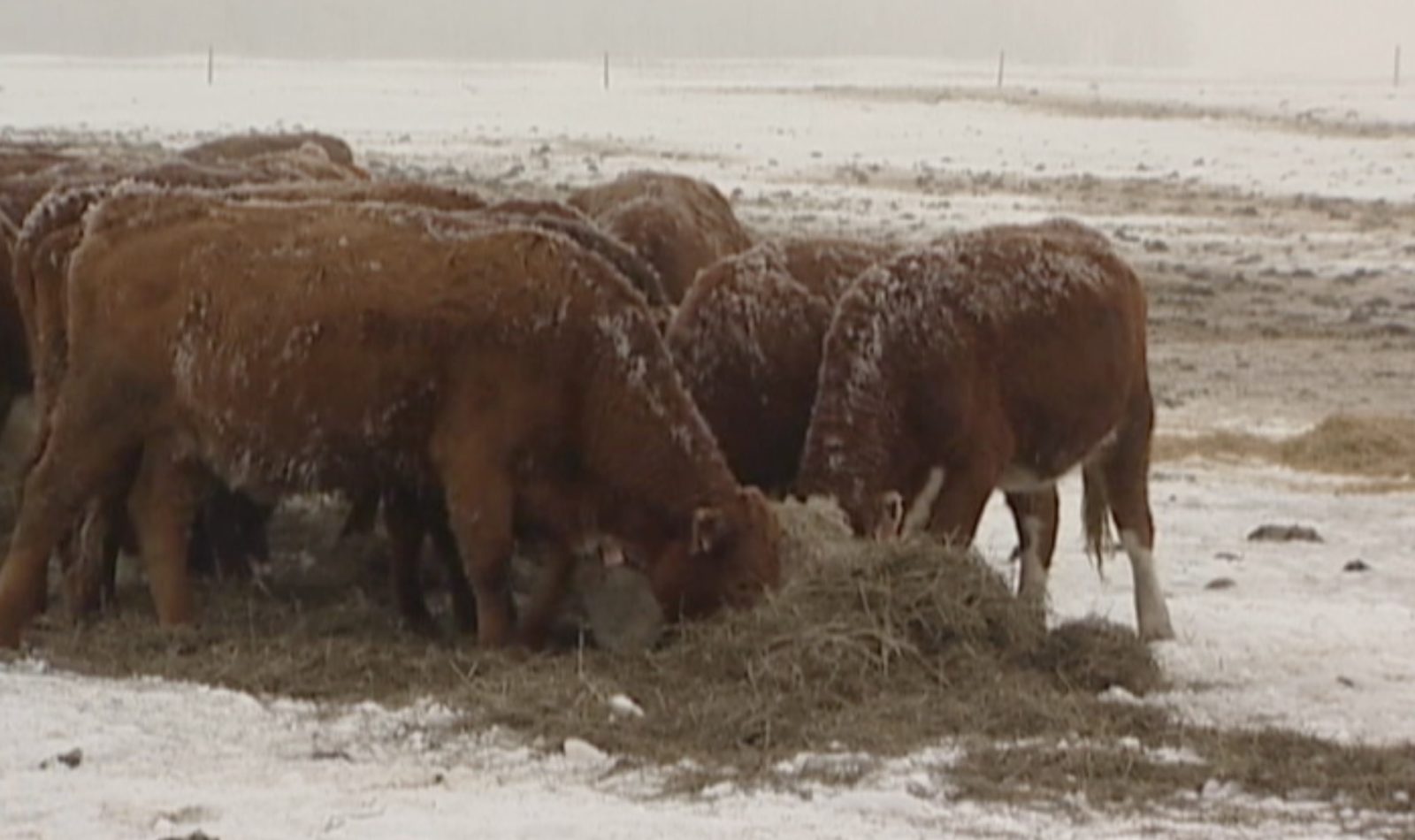 DR. JEREMY SCHEFERS: Before I cut into the carcass…

FRED DE SAM LAZARO: The University of Minnesota Veterinary School is one of the frontlines of America’s defense against mad cow disease. It is one of several labs the U.S. Department of Agriculture has asked to test animals that show any symptoms of ill health, says Dr. Jeremy Schefers.

DR. JEREMY SCHEFERS: The goal is to test about a quarter million animals over an 18-month period. There’s about 35 million cattle in the U.S. So statistically, we’re very confident that if there’s one out there, we’ll find it.

FRED DE SAM LAZARO: The Canadian border was closed to imports of all live cattle two years ago after a case surfaced in Canada of bovine spongiform encephalopathy, or BSE, the so-called mad cow disease.

Since the border closure, three more cases were discovered, all traced to Canadian herds. The plan now is to allow into the U.S. animals under 30-months-old, those considered least likely to have the disease. There’s disagreement about whether that’s a good plan. A key concern is the public health issue.

Will Hueston, a USDA consultant and BSE expert at the University of Minnesota, says there’s little danger to public health. Besides the surveillance program, he says the source of contagion, feed supplements that contained cattle parts, has been removed.

DR. WILL HUESTON: We were taking the parts of the cattle that we didn’t eat, that humans don’t eat. We were cooking those to remove the fat, and the material, the protein that was left was ground up and, in fact, used as a protein supplement.

FRED DE SAM LAZARO: Which is now out of circulation?

DR. WILL HUESTON: — is now out of circulation.

SEN. JOHN THUNE: I think that the four incidents that we’ve had in Canada in the last three years or so– the most recent one was a perfect example– the animal was younger than the 1997 feed ban, which suggests that Canada was not fully in compliance.

FRED DE SAM LAZARO: But he admits there’s no escaping the economics in this dispute. Ranchers depend heavily on exports of meat to Asia. The stigma over mad cow has prompted big buyers, like Japan and Korea, to shut their doors to U.S. imports.

Sen. Thune says they’re more likely to start buying U.S. beef again if there’s no Canadian meat mixed in. The meat is not required to be labeled by country of origin.

SEN. JOHN THUNE: Again, they’ve had four incidents in the last three years. My view is that Asia is going to have a much higher comfort level with opening to U.S. if we are, first place, policing our border.

FRED DE SAM LAZARO: The ranchers he represents are also happy without the Canadian competition, which has shortened the supply of beef. Rick Fox raises cattle near Rapid City, in the shadow of South Dakota’s Black Hills.

RICK FOX: We didn’t have an export market in 2004, and I got some of the best prices I ever had for my cattle. And that goes to show you how much imports was affecting our markets. When that Canadian border shut down, our market went up.

FRED DE SAM LAZARO: Fox belongs to a group of ranchers called R-Calf, which is suing to keep the border closed. The group has grown from 300 members to 12,000 in the last six years. Business is always tough, they complain, and reopening to Canadian imports will spell disaster.

RICK FOX: They open that border up, you’re going to hear a giant sucking sound again, just like with NAFTA. All that meat is going to come down to the United States to be slaughtered, all the excess feeder cattle in Canada will probably end up in the United States in the feedlots.

FRED DE SAM LAZARO: In Canada, beef producers depend heavily on exports south of the border, and ranchers say the shut off of U.S. markets has been devastating. Alan Minchau, ranches near Millet, Alberta.

And then say, too, the equity part of it, like when you do your financing, the bank looks at it and they say “what are these cattle worth?” And a lot of them won’t even take those cattle as equity ’cause they’re worth nothing.

FRED DE SAM LAZARO: Canadian farmers and government officials say there’s really no difference in the systems between here and the United States when it comes to the way cows are raised, in what they’re fed and in the system for surveillance and testing for mad cow eisease.

Dr. Gerald Ollis is head veterinarian for the province of Alberta, where all the Canadian BSE cases have so far been found. He says those cases could just as soon have been found south of the border.

DR. GERALD OLLIS: I can’t really say why you haven’t found it in the states yet. It may be, seriously, that you’re much more lucky than we are. I don’t call it luck that we found it, but it may be as simple as that. And the fact that we’ve been able to detect four, two so close together, is just simply a random event. Statistically one could argue that.

FRED DE SAM LAZARO: The Canadian surveillance is every bit as thorough as the American, he insists. Farmers are asked to call in when they have cows showing any symptoms of illness. They are destroyed, their brains tested for BSE and their owners reimbursed by the government, about 200 U.S. dollars per cow.

ALLAN MINCHAU: No. Not for what the worth of the cow is, no. But I guess it’s better than a kick in the butt with a frozen moccasin, as some people would say.

FRED DE SAM LAZARO: Minchau took out a new mortgage hoping to hold on until U.S. trade resumes. His strongest ally is the American meat packing industry. It is suing the USDA, arguing all trade should be reopened, including older cattle, which many U.S. plants use to produce hamburger. Meat industry spokesman Patrick Boyle says packers have been badly hurt.

PATRICK BOYLE: Five plants have closed during the past 20 months, permanently closed. A number of plants have temporarily shut their doors, and those that continue to operate are operating at 10 percent less capacity or 15 percent lower level than they did prior to the closure of the border.

FRED DE SAM LAZARO: And Boyle argues opening the border will increase the chances that Asian countries will resume beef imports which are down 90 percent from their $4 billion a year level in 2002.

He says open trade between the U.S. and Canada the border will send a signal that the U.S. Government is satisfied that North American beef supply is free of BSE.

With the discovery of mad cow disease in Canadian cattle herds, the trade of beef between the US and Canada has been halted. The fear of mad cow disease on this continent has lead to Asian markets closing their borders to Canadian and American beef.