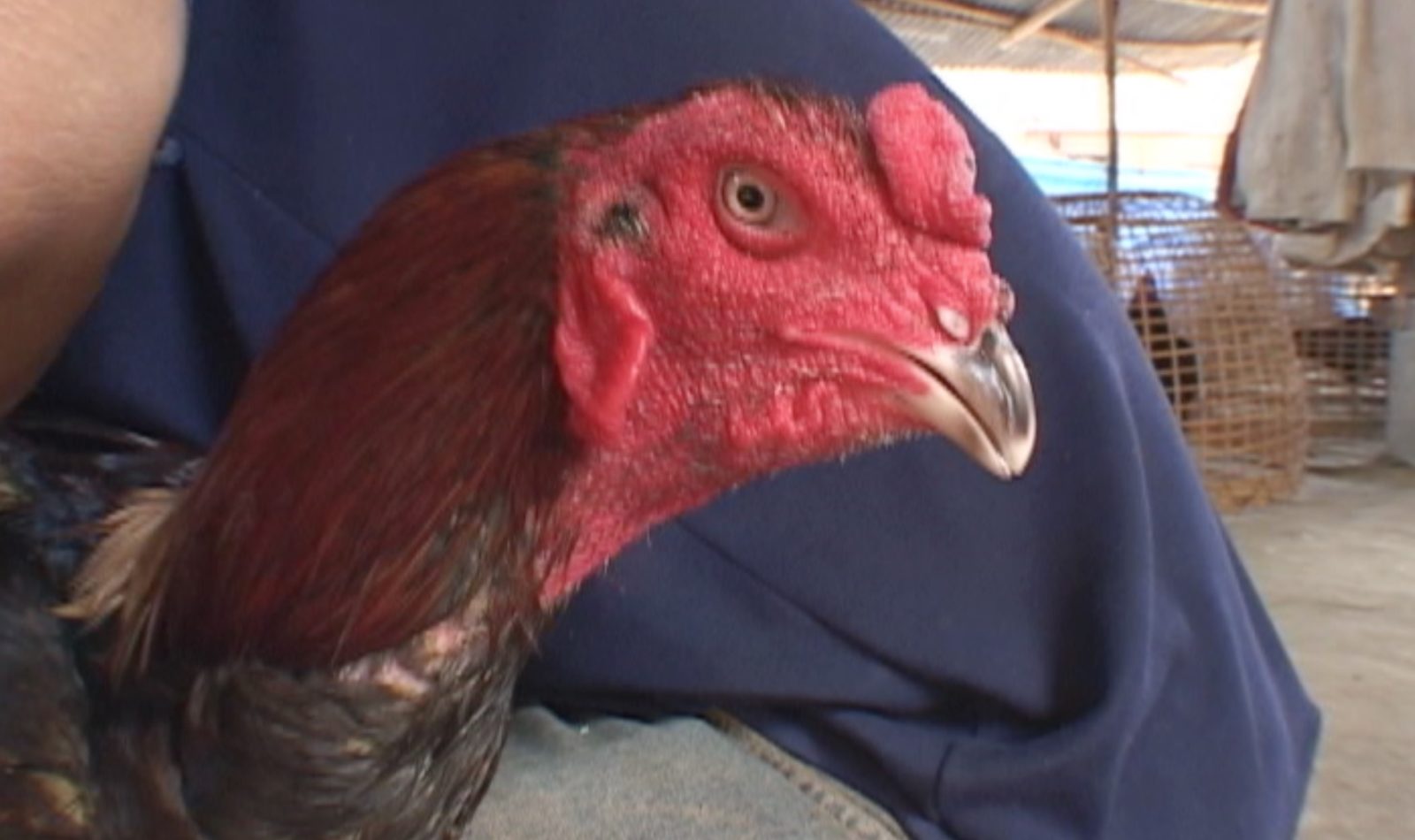 FRED DE SAM LAZARO: Chickens and ducks have the run of the place in much of rural Thailand. Some are treated like pets; some even are treated like royalty. Fighting cocks are prized like race horses, part of the local economy, very much part of the culture. Poultry is also a staple in Thai diets and until recently, a major export.

All this has made it difficult for Thailand and neighboring countries to fight what’s called bird or avian flu. The virus that causes it is carried by migratory birds and waterfowl, like ducks, which are not harmed by it. It was first detected in Northeast Asia in the mid-’90s, when it had moved to chickens, which are affected.

Authorities in Hong Kong, Korea, and Japan appeared to contain the flu by destroying entire flocks where the virus was detected. But last year, a more potent avian flu virus reemerged in Southeast Asia ravaging thousands of both farm and free-range chickens.

After the first human cases, the Thai government destroyed millions more birds. Several dozen people have been infected in Thailand, Cambodia and Vietnam, three quarters of them fatally. In all but one case, the disease has spread from birds to humans, humans who had long exposure to the virus, like poultry farm workers.

But scientists worry the virus, which is called H5N1, is always mutating or evolving and may soon begin to move easily from person to person just like regular flu. Dr. William Aldis is with the World Health Organization.

DR. WILLIAM ALDIS: We have good reason to fear that if the H5N1 virus that’s now widely established in chicken and duck and wildfowl population in probably ten countries, that it would take only a very small genetic change or modification in that virus to make it rapidly transmissible to people.

FRED DE SAM LAZARO: That, he said, would quickly trigger a worldwide pandemic.

FRED DE SAM LAZARO: Late in 2002, an outbreak of SARS, Severe Acute Respiratory Syndrome, began in southern China but spread rapidly across the world killing a tenth of the 8,000 people affected. The toll from avian flu could dwarf SARS and even the 1918 Spanish Flu that killed 20 million, according to Michael Osterholm epidemiologist at the university of Minnesota.

DR. MICHAEL OSTERHOLM: If one takes a look at the 1918 pandemic that swept around the world, literally in weeks, and extrapolate those number of deaths then to what we might expect to see today, we could easily see 1.7 million deaths in the United States in one year and up to 360 million deaths worldwide.

FRED DE SAM LAZARO: Public health experts say it’s no longer a question of if, but rather when a major bird flu pandemic will hit. The challenge now is to try to contain it so that so the world can become better prepared when it hits.

Thailand’s approach to avian flu is being closely watched by World Health Organization and by U.S. experts. The country has long had a system of village health volunteers. Each is in charge of checking on the health of about ten neighbors.

Throughout the country, they’re now being deployed to look closely for bird flu. Volunteers try to survey bird populations and must report any ill health in animals or people to local authorities. Sick birds are tested for avian flu and positive findings bring a rapid response.

SPOKESPERSON: He says this is the pit where we buried the chickens, ducks and geese.

FRED DE SAM LAZARO: In this small village, headman Vicharn Wanna says took about an hour to round up all the chickens from the village’s 137 households. Sick and healthy, they were all destroyed.

FRED DE SAM LAZARO: Even with compensation, Thai farmers and peasants don’t fully recover their losses when birds are culled, especially if they are fighting cocks which can fetch up to $1,000. There’s worry that owners may be reluctant to report sick poultry. But Thai officials say they are making some progress. Dr. Supamit Chunsuttiwat is with the Ministry of Public Health.

DR. SUPAMIT CHUNSUTTIWAT, Thai Ministry of Public Health: In first round, we had 12 cases; in second round we had five. And since then, the surveillance on both sides, on the animal side and on the human side, have been carried out at full scale, up until now. We have been on high alert to detect the cases in humans as best as possible and we haven’t found a case since October up until now.

FRED DE SAM LAZARO: In two border provinces, the surveillance has been intensified in a special joint project with the U.S. Centers for Disease Control.

Here in Sakaeo province on Thailand’s border with Cambodia, the entire population, over a half million people, is being watched for any signs of respiratory disease or pneumonia. Specimens are analyzed both here and at the CDC in Atlanta, where X-rays are sent electronically. Epidemiologist Sonja Olsen likens it to a listening post for diseases in their earliest stages.

DR. SONJA OLSEN: It may be possible to actually stop an outbreak before it were a pandemic. I think that’s sort of a new way of thinking. In the past we thought when the next pandemic influenza hits, you know, we will just try to do the best we can to prevent, you know, additional deaths or do what we can. I think now the thinking is if we can identify it at the source, and stop it, then maybe we can potentially prevent a pandemic

FRED DE SAM LAZARO: No one’s sure it will work, but one reason for optimism is that unlike the SARS outbreak, countries are far more willing to admit early on that they might have a problem, according to Dr. Scott Dowell who heads CDC’s Thailand office.

DR. SCOTT DOWELL: At the beginning of bird flu epidemic, we saw some of the old approach of, “Well, we’re not sure this is the Bird Flu,” from various countries, a failure to acknowledge or confirm the problem.

That was when it was viewed as primarily an economic issue or an agricultural problem. Very quickly when you saw it move to human populations, it very quickly changed to a really transparent response from most countries in this region, and I think the lesson from SARS helped with that.

FRED DE SAM LAZARO: But communication is just one part of preparing for a pandemic and Dr. Dowell worries there may not be time.

DR. SCOTT DOWELL: Again, if the question is, “Are we ready in this part of the world to respond to a pandemic,” I think the answer has to be no.

DR. SUPAMIT CHUNSUTTIWAT: If a pandemic comes in a few months, no one is able to help himself. No country is in the position of better enough preparedness, even the United States or Europe.

FRED DE SAM LAZARO: He says Thailand is working with neighbors and the World Health Organization to develop a region-wide strategy to respond to outbreaks.

DR. SUPAMIT CHUNSUTTIWAT: If we were lucky enough, we would be able to work together to come up with some vaccines or anti-virals before the pandemic strikes us.

FRED DE SAM LAZARO: Worldwide stockpiles of antiviral drugs are well short of what’s needed. Also, it would also take months after an actual human outbreak to develop a vaccine. In an upcoming article for the New England Journal of Medicine, Osterholm argues a plan is urgently needed.

DR. MICHAEL OSTERHOLM: How are we going to handle our everyday lives here in this country to make sure that we can deal with sick people? What do we do to assure that people continue to have a food supply once transportation is shut down? How will we manage the basic business of life when up to half the population may become ill and 5 percent of those will die? Those plans have to be made right now.

FRED DE SAM LAZARO: It is ironic, scientists say, that sophisticated molecular biology today can help anticipate an epidemic, and yet the world remains as vulnerable to devastation as it was a century ago.

H5N1 virus may move to humans

The avian flu outbreak comes on the heels of another deadly disease outbreak, SARS. It has struck Thailand particularly hard, where poultry is an important foodstuff and cockfighting is a popular sport. Experts are warning that unless we act now, this pandemic could easily surpass that of the 1918 flu outbreak.