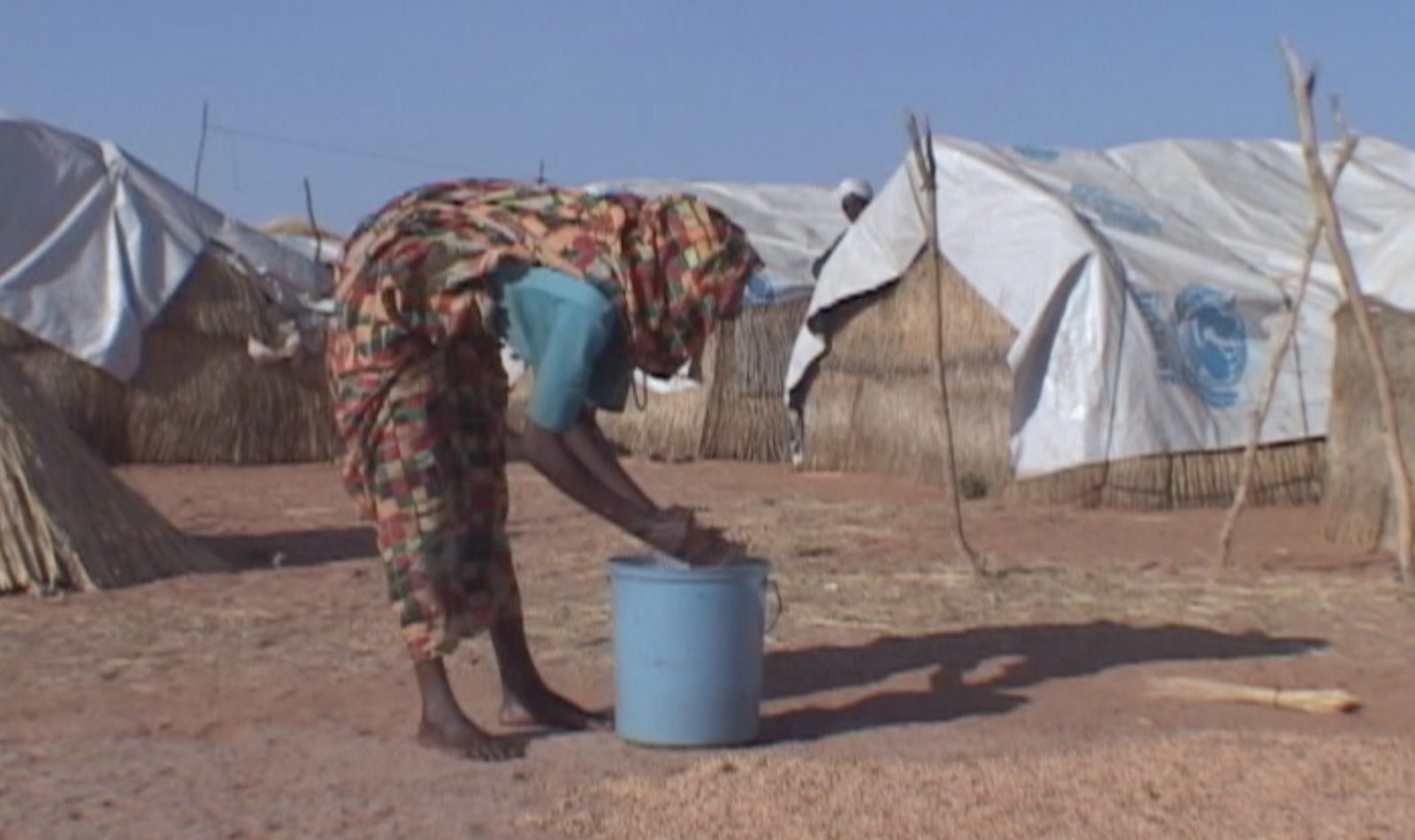 FRED DE SAM LAZARO: Conditions in this camp in Sudan’s Darfur region could hardly be more primitive for Sawah al Mansur. Still, the 38-year-old widow has enough food these days for her four children, and some refuge from the terror that she fled in her village about three hours away by foot.

SAWAH AL MANSUR (Translated): They came at 4:00 in the morning with people on trucks with mounted guns. They killed a lot of people. They killed my husband; they took my animals and took our food stocks.

FRED DE SAM LAZARO: Sawah al Mansur is among an estimated 2.5 million, mostly widowed women and children, who, beginning in 2003, were driven from their homes across this vast remote land. They are black Africans, pursued by so-called Arab militiamen or Janjaweed, men allegedly armed by Sudan’s government which has been battling black-led rebel groups in Darfur.

One year ago, before refugee camps were fully established in Darfur and neighboring Chad, relief organizations feared a humanitarian catastrophe with starvation and disease outbreaks from unsanitary conditions and unsafe water. Today, thanks to one of the largest international relief efforts in recent history, that catastrophe has been averted. Swedish diplomat Jan Pronk is U.N. Special Envoy for Sudan.

JAN PRONK: At the moment the situation in the camps is quite good. Of course, it’s an awful life. But in terms of nutrition, sanitation, water and education, we can reach many people.

FRED DE SAM LAZARO: Over the past year, some 10,000 workers from dozens of aid groups have come to the region. So have hundreds of tons of food staples, much of it American. Children in camps like this one near the city of Geneina attend school. And wells are being bored in villages across Darfur.

The group Islamic Relief alone, using sophisticated equipment, is creating up to 35 safe wells every week. Relief organizations say they’ve had reasonable luck finding water underground here in Darfur. The challenge is to secure these facilities once they’re up and running.

One of the hallmarks of this war has been burned villages and spoiled wells. Despite two cease-fire agreements between the government and rebels, Darfur remains a dangerous place. The U.N. says about 200 people are still killed each month across the region. Other estimates are much higher. There’s also plenty of freelance banditry.

JAN PLONK: Many of our cars are being looted, there’s plundering by groups which are split away either from the military or from the rebel movements, and they start for themselves, you may say. So the insecurity of humanitarian workers is quite a problem for us.

For instance in the place where we are now, which is Geneina at the border of Chad, I had to decide to withdraw all the humanitarian workers for about ten days back to the capital in order to assess the situation, because there were threats.

FRED DE SAM LAZARO: The situation is that much worse for ordinary Darfurians.

MAN (Translated): We’ve been attacked by the Janjaweed more than four times. They have stolen sheep, horses, people’s belongings.

MAN (Translated): There are not enough police. The police themselves are afraid to go after the criminals.

FRED DE SAM LAZARO: Life is especially perilous for women. They leave the camps in search of firewood, the main cooking fuel. Dahabiya Ramadan Sirri says many camp women have been assaulted.

DAHABIYA RAMADAN SIRRI (Translated): It’s become common. The people come and ambush us, they rape us. We’re very afraid any time we leave the camp. We’re very worried here, and we cannot sleep at night because the Janjaweed can come at any time and take our daughters, and can take our women.

FRED DE SAM LAZARO: The mass killings that took most of their men have been called the worst atrocities since Rwanda; as many as 200,000 people are thought to have died. Former Secretary of State Colin Powell called it genocide. Recently, the U. N. announced indictments before the International Criminal Court of leading figures in the Darfur killings, a move fiercely criticized by Sudan’s government.

SULEIMAN ABD ALLA ADAM (Translated): We’re capable in Sudan to bring the perpetrators if they are proved guilty to justice. Our constitution in Sudan provides for a fair trial and fair sentences. The punishments here can be more aggressive than at the International Criminal Court.

FRED DE SAM LAZARO: Suleiman Abd Alla Adam is the governor of west Darfur province. Like the Khartoum government he represents, the governor blames rebel forces for the atrocities.

FRED DE SAM LAZARO: Whoever is to blame, and international observers mostly blame the government and Janjaweed militias, the conflict has made the marginal land here even less productive. Thousands of villages like this one, which was called Tabarik, have been literally burned out of existence. There’s hardly a trace of the communities here that grew several different crops and raised livestock. Food production has been wiped out across a vast region of Sudan, and it will take years to recover.

SPOKESPERSON: Today Team 3C was asked to conduct a routine patrol by road.

FRED DE SAM LAZARO: One hope for a return of security and villagers is the recently formed African Union peacekeeping force. Even though it’s mandated restricted to monitoring the cease-fire, aid workers say the troops’ mere presence could deter violence. However, just 2,300 soldiers must patrol dozens of camps for internally displaced people, or IDP’s, in a region the size of France. Western section commander Lord Sarfo, a Ghanaian colonel, says that number should be twice or three times its size.

COL. LORD SARFO: We have so many IDP camps, and to deploy to protect all these IDP camps would be a strain on our resources. And I’ve already said we don’t have enough men on the ground. The greatest challenge is the terrain. Short distances you take about, say, two hours to cover a journey of only 40 kilometers and here to use the helicopter would be a waste of resources.

FRED DE SAM LAZARO: Absent firm security, there’s little likelihood of getting Sawah al Mansur to return to her village to rebuild her life. For the moment, ironically, the nutrition and health of many refugees is better than it was prior to the conflict in this impoverished region. Still, al Mansur says what she had at home was her dignity.

SAWAH AL MANSUR (Translated): I didn’t used to live in a place like this. In my house I had a bed and many other things; now, I have nothing. In the village I used to be independent. I didn’t depend on anybody, and now I have to depend on others for everything. I can’t even change my children’s clothes. This is all we have.

FRED DE SAM LAZARO: Even that may not last. Aid officials, short of money, had planned to cut some food rations by a half. However, this week the U.S. stepped in with a major food donation. Even so, there’s worry that this region, isolated by forbidding geography and limited media access, will fade from the world’s consciousness. Youssif el Tayeb works for the aid group Islamic Relief.

YOUSSIF EL TAYEB, ISLAMIC RELIEF: There is going to be donor fatigue, media disinterest, because old-fashioned stories fetch no headlines. Huge, huge sums of money are needed elsewhere. So that’s it. I am afraid the powers who will have the strength to push for reconciliation, I’m not sure how much are they interested in this part of the world.

FRED DE SAM LAZARO: Unless the world remains focused on Darfur, he says, this region could quickly slip back to where it was a year ago, on the brink of a humanitarian catastrophe.

Recovering from the brink of catastrophe

This program originally aired on PBS Newshour on May 10, 2005. Correspondent Fred de Sam Lazaro was one of the few western reporters who was been able to gain access to the remote region in 2005.