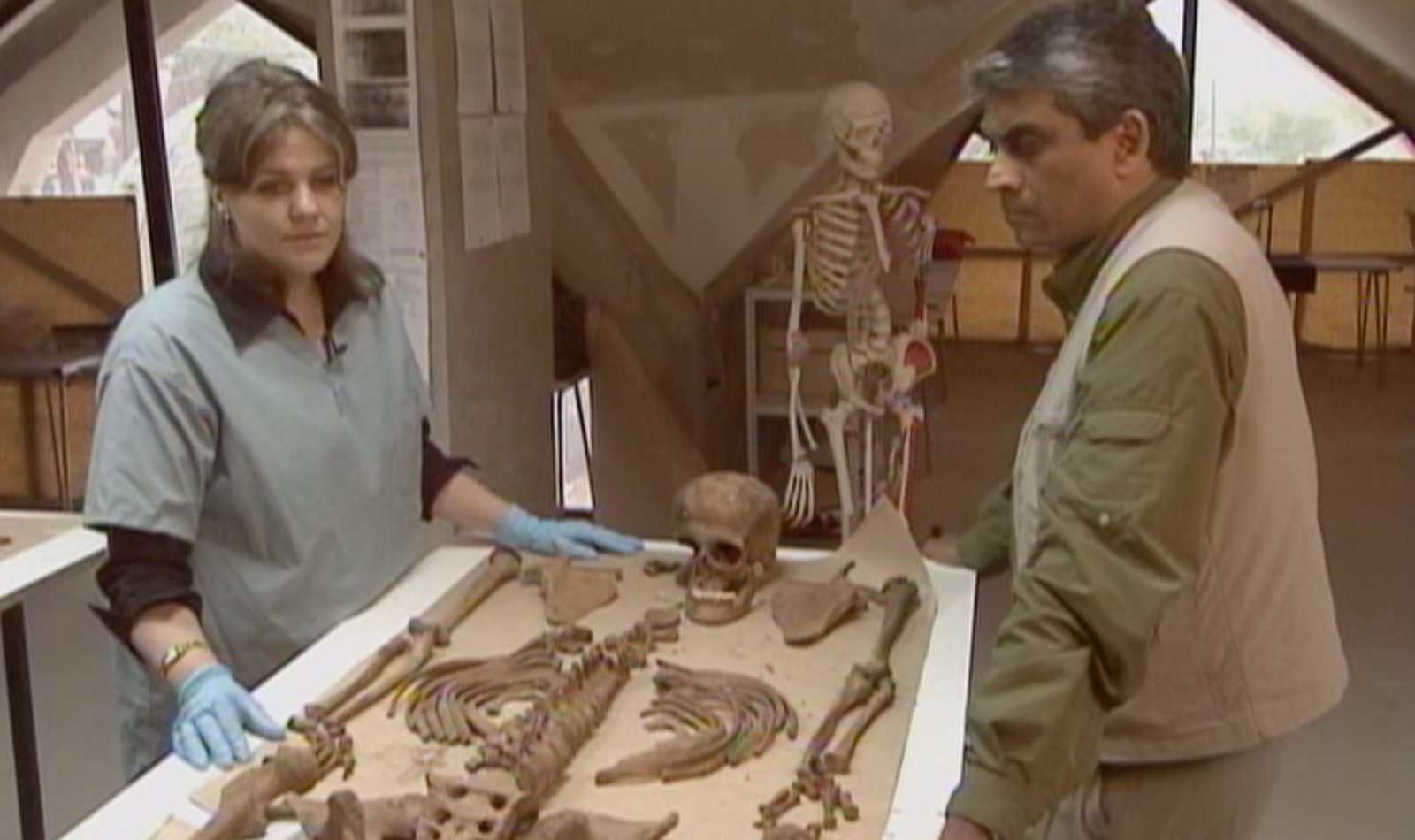 ZLATAN SABANOVIC: This is storage room —

ZLATAN SABANOVIC: So far in this facility we have 3,700 body bags and just 867 shelves.

FRED DE SAM LAZARO: More bodies arrive almost daily. Some 15,000 people are still listed as missing a decade after the war ended here. Finding and identifying them has been the job of the International Commission on Missing Persons. Its American director, Kathryne Bomberger, has lived here since 1998.

KATHRYNE BOMBERGER: We hope that it will make a contribution to truth, justice, and hopefully reconciliation, and that by looking at the past, they’re in a better position to address the future here. Having lived here these many years, we still feel these tensions of fear boiling beneath the surface.

FRED DE SAM LAZARO: Just beneath the surface, in mass graves across northern Bosnia, lies evidence of the most brutal episode in Bosnia’s four-year war. In what’s now called a massacre at Srebrenica, Muslim men and boys from the area, some 8,000 in all, were killed after Serb forces overran the town. Their bodies were dumped in mass graves. The graves were often moved once, sometimes twice, to secondary locations like this one to escape detection. Many have yet to be found.

NEZIRA SULEJMANOVIC (Translated): When we first heard about the fall of Srebrenica, my younger son was home. When the older one came in, we left our lunch on the table. In a hurry, we simply collected just some basic belongings and got ready to leave. I started crying.

FRED DE SAM LAZARO: Nezira Sulejmanovic fled her Srebrenica home and eventually moved to a town outside Sarajevo three hours away, but she vividly remembers the day ten years ago when her hometown fell to forces led by Ratko Mladic, the Bosnian Serb general. He later went into hiding after being indicted for war crimes by an international court in The Hague.

NEZIRA SULEJMANOVIC (Translated): Mladic came along. He was right there, five meters from where I was. He was very polite. He gave candy to children.

FRED DE SAM LAZARO: Many Muslim residents fled Srebrenica on foot, but thousands, including the Sulejmanovic family, sought refuge in a local factory.

NEZIRA SULEJMANOVIC (Translated): We were so hungry in the factory behind the fence. It was so close to my house’ we could see my house from there. We had food there. I could see them going into my house taking everything away.

FRED DE SAM LAZARO: Three days later, she and her young daughter, along with all women and children, were bused to a safe haven with the help of U.N. peacekeepers. However, the Dutch U.N. battalion did not interfere as Serb forces took away the men and boys to a fate much worse than hunger. Nezira Sulejmanovic never saw her two sons again. Earlier in the war she also lost her oldest daughter in a mortar attack that hit their home.

BILL CLINTON: These three Balkan leaders made the fateful choice for peace.

FRED DE SAM LAZARO: Srebrenica galvanized international efforts to end the war. Four months later, a peace accord was reached in Dayton, Ohio, and signed in Paris. The treaty split Bosnia into a Serb-dominated Republic of Srpska, and a federation held by a coalition of Bosniac Muslims and Croats, with the federal capital in Sarajevo.

In all, about a quarter of a million Bosnians were killed. Almost two million, half Bosnia’s population, were driven from their homes. For ten years, international soldiers and aid groups have helped keep Bosnia at peace. They’ve returned more than half those displaced to their pre-war homes and tried to rebuild political and civic institutions and the economy. And they’ve tried to recover and identify missing people. Tuzla’s morgue is focused on the victims of Srebrenica, says Zlatan Sabanovic of the Missing Persons Commission.

ZLATAN SABANOVIC: One group of people tried to escape through forests to come in free territory, and they were killed on the road between Tuzla and Srebrenica. And they were on the ground. And we call them surface remains. So far, we’ve collected around 800 body bags with that kind of remains. All other remains were from primary and secondary mass graves.

FRED DE SAM LAZARO: That means body bags often contain the remains from more than one individual. They are brought to what’s called a re-association center headed by Cheryl Katzmarzyk.

CHERLY KATZMARZYK: In fact, we’ve had cases of up to 30 people within a body bag.

FRED DE SAM LAZARO: Each bag is searched methodically. Bones are cleaned and laid out in what looks like an anatomy board game where players look for matches.

FRED DE SAM LAZARO: Now, how is this determined to be from one individual?

FRED DE SAM LAZARO: Is it done by —

CHERLY KATZMARZYK: Visual observation. But as you see here, we have some very unique connections in our body. And so this sacrum will likely not fit this innominate as beautifully as it does. I mean, you can clearly see that it’s a match.

FRED DE SAM LAZARO: The skull size and the length of long bones, thighs and arms, give clues about age and height. Occasionally, evidence shows up of an injury that would have occurred long before death, like this broken left shoulder. It will be checked against missing person reports filed by families.

FRED DE SAM LAZARO: So when a relative reports this person missing, the hope is that that would be included?

FRED DE SAM LAZARO: That this person had a shoulder injury?

FRED DE SAM LAZARO: More likely, clues to an identity will be far more subtle, so a DNA fingerprint is extracted from a sample of bone. This genetic profile is then compared to those of relatives of missing persons.

KATHRYNE BOMBERGER: We’ve now collected over 70,000 blood samples. It’s like throwing out a wide net. You’re collecting blood samples from living family members and simultaneously bone samples from mass grave sites. So it’s — it is contributing to the process of very accurate identification.

FRED DE SAM LAZARO: DNA reports like this bring legal closure to a missing person case. But he says for many families, personal effects, which are carefully cataloged here, are just as crucial.

ZLATAN SABANOVIC: It’s — I think really, really important to recognize something, some parts of clothing or personal belongings like rings or watches, because for them it’s really, really hard to understand, you know, just DNA program, and it’s much, much easier if they can recognize and they will be more satisfied, you know.

FRED DE SAM LAZARO: If they see a piece of clothing or a watch or something?

FRED DE SAM LAZARO: So far, about 2,000 Srebrenica victims, about a quarter of the total killed, have been identified. It may be a small step toward reconciliation in a country still fractured by ethnic politics where fugitive leaders, like Gen. Mladic and Radovan Karadzic, remain popular.

But the men supervising the peace process here says it is an important symbolic exercise. Former British politician Paddy Ashdown is the U.N. High Representative for Bosnia.

PADDY ASHDOWN: You can’t build a nation, however terrible the crimes committed, you can’t build a nation on vindictiveness and revenge. And the death of a mother’s child is, in her mind, unfinished business until the body is discovered and until she is able to put to rest the remains. I’ve seen that. I mean, one of my first early tasks was to help build the Srebrenica Cemetery, which I think will be a great place of pilgrimage for everybody, including the international community who must realize we must not allow this kind of genocide ever again.

FRED DE SAM LAZARO: Nezira Sulejmanovic would like to see the perpetrators of war crimes, big and small, brought to justice. But first she has unfinished business at the cemetery. Her older son, Semsadine, was buried here two years ago. His bones were discovered in a mass grave in neighboring Serbia. Now, she awaits word on Sevar, who was 16 when she last saw him.

NEZIRA SULEJMANOVIC (Translated): We don’t know about my second son. I’m waiting by the telephone every day; I’m waiting for the news. We gave our blood specimens, blood samples.

FRED DE SAM LAZARO: There is no telling where her son will be found; 500 other victims of Srebrenica will be buried with full honors in a ceremony here on July 11.

A decade after the end of the Bosnian conflict there are still many missing persons and mass graves are still being found. As a way to add a final closure to this conflict for the many people who lost loved ones, there is a massive operation underway to identify the dead. As mass graves are found and excavated the remains are sorted and checked against reports families have sent in that include medical histories and DNA samples.