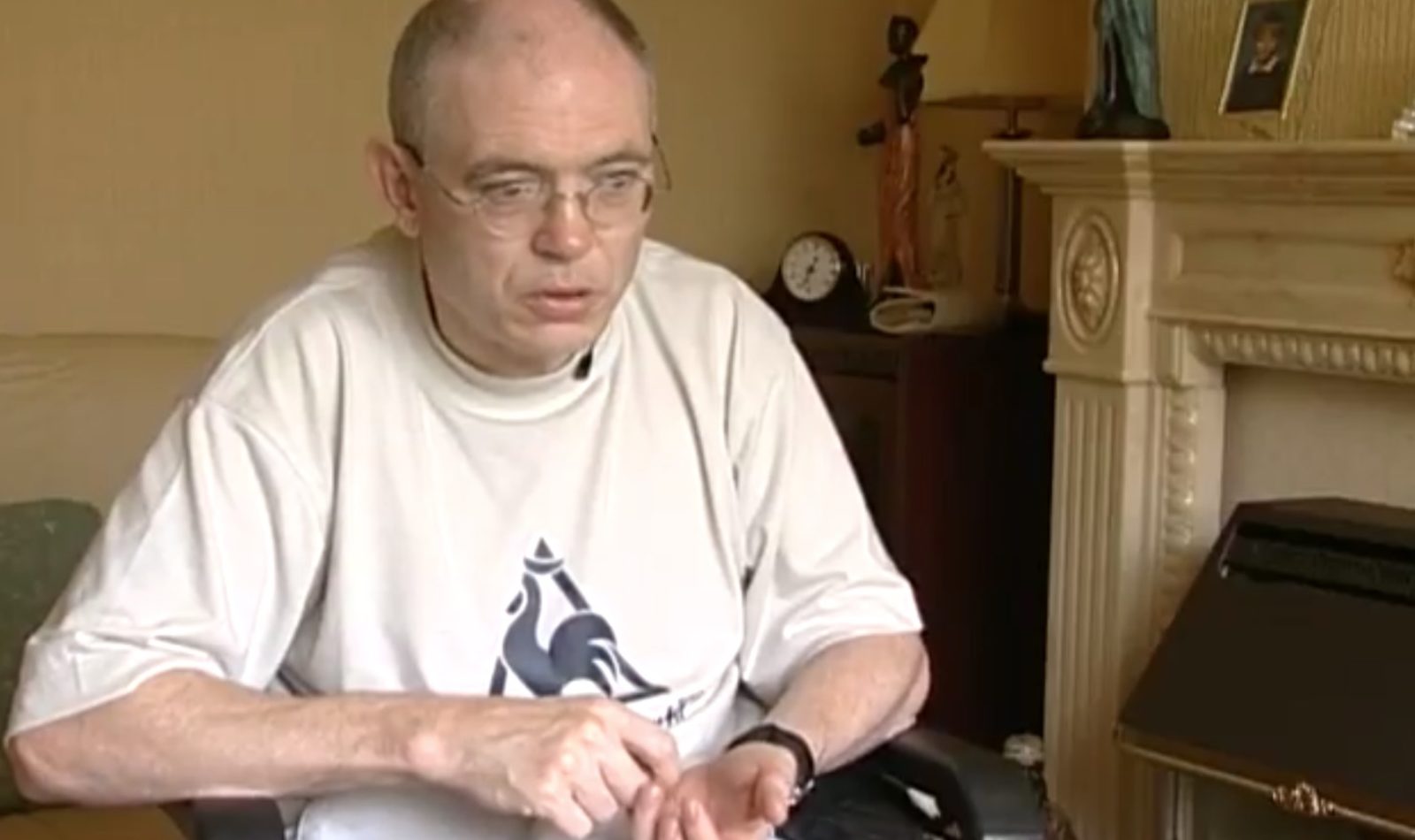 LUCKY SEVERSON, guest anchor (March 10, 2006): The so-called “right to die” is applied to terminally ill patients who want their suffering to end. But what about the “right to live”? What about a patient whose disease will eventually rob him of his ability to make decisions but who doesn’t want someone else deciding when to end his life support? Last year a British court ruled that at the final stage of life, it is the doctor’s decision. But the controversy continues, and so we want to revisit the case of Leslie Burke. Fred de Sam Lazaro filed this report from London.

FRED DE SAM LAZARO: If Leslie Burke could describe himself in one word, that word would probably be “defiant.” His speech, increasingly, is slurred. But just by surviving, Burke has defied the odds doctors gave him 22 years ago.

LESLIE BURKE: I was told at the time by the doctors that I wasn’t expected to live much past my 40th birthday. But I will be very, very glad to say that I’ve proved them wrong.

DE SAM LAZARO: By quite a ways!

DE SAM LAZARO: But Burke’s cerebral ataxia is a degenerative disease, and it will eventually claim his ability to speak and swallow. He’ll become dependent on artificial feeding and fluids, and his big fear is that doctors will decide to pull the plug on his life support against his wishes — wishes that, toward the end, he would no longer be able to convey.

Mr. BURKE: I’m extremely scared. I know it takes up to two weeks to die, and I would be aware about that every second, every minute, every day that it would take, and there would be absolutely nothing that I could do about it.

DE SAM LAZARO: Leslie Burke took his case to court, asking that artificial nutrition and fluids not be withheld when he becomes incapacitated. A high court agreed, ruling that doctors must abide by the wishes of the patient if those wishes are expressed while the patient is still competent.

Disabled rights groups cheered the verdict. Not so Britain’s National Health Service, which must pay the bills; not so many doctors; and not so the General Medical Council, which appealed.

Dr. GRAEME CATTO (General Medical Council): It needs to be a dialogue and a debate between the patient and the doctor or the health care team. And, of course, it’s not realistic to have patients being able to require treatment. So I think it’s difficult to envisage a situation where a doctor would be required to provide a treatment for which there was no clinical indication, which was not likely to benefit the patient in any way.

DE SAM LAZARO: The Medical Council, which regulates and disciplines doctors, and the British Medical Association, a professional group, say a patient’s best interests are always the overriding consideration in practice guidelines.

Dr. MICHAEL WILKS (British Medical Association): Because we feel that respecting a patient’s wishes, even sometimes beyond the point where on a purely clinical focus the treatment is of no great purpose — that we would still give it, because it’s in the patient’s best interest … to respect their wishes.

DE SAM LAZARO: However, disabled rights advocates who came to Burke’s assistance question whether a doctor can always truly discern a patient’s will or best interest.

LIZ SAYCE (Disability Rights Commission): We know very well that nondisabled people imagine that even, say, using a wheelchair would make life so awful — would make their quality of life so awful — many people think they wouldn’t want to live in that sort of situation. When you’re in that situation, once you’ve adapted to it you don’t feel like that, [and] of course you want to live. You can have a great quality of life as somebody who is using a wheelchair, and we really have to guard against nondisabled people with the best of motives — this is not about anybody being, you know, deliberately discriminatory — with the best of motives thinking, “That person has no quality of life. It would be better to relieve them of their misery.”

DE SAM LAZARO: And increasingly, she says, many disabled people fear concern over cost could also drive such decisions. This issue — the high cost of end-of-life care — further complicated the Burke case after the government weighed in. It argued that meeting all treatment demands of a patient could strain Britain’s tax-funded National Health Service or NHS.

Dr. WILKS: And that produced some pretty negative headlines in the newspapers over here, because it began to look as if you would be putting a price on a life, as it were. Now we would reject that approach utterly, but we’ve still got to recognize that if it became a widespread habit to treat on the basis of patient demand as your first marker, as opposed to what’s clinically appropriate in the best interest of the patient, then we will be using a lot of NHS resources — expensive NHS resources — in sustaining life in circumstances where we believe our patients would not wish us to do that, and that has to be depriving other people of treatment.

DE SAM LAZARO: Several parties asked to join the Burke suit on one side or the other. Britain’s Catholic Bishops Conference faced a dilemma. Spokesman Charles Wilkes says Burke’s plea is inherently in line with the Church’s pro-life stance. However, he says giving patients more autonomy, as the initial Burke judgment did, could enable assisted suicide.

CHARLES WILKES (Catholic Bishops’ Conference): You could have a situation where a patient demanded — out of their autonomy — a doctor to provide them with a treatment that would kill them. Because that’s their autonomous desire; they want to die. And in this way, this judgment could be seen as leading toward euthanasia.

DE SAM LAZARO: The Catholic bishops opposed Burke’s plea for that reason. Other pro-life groups and individuals, mostly American, offered unqualified support, but mostly through e-mail and Web campaigns, not through demonstrations and picket lines as in the Terry Schiavo case.

Dr. WILKS: I think there are echoes of the Schiavo case in this sense: that if a strong pro-life lobby built up in this country and said to patients, “Well, you should just demand to continue to be treated even if the treatment is of no great value,” that “You should demand that,” then we could see quite a powerful patient voice developing, which I think would be very unhelpful, because we would find people being persuaded into accepting prolonged treatment that had no benefit and might arguably cause more suffering. So there is that link, but we haven’t had that kind of evangelical Christian Right input into medical decision making in this country, and I suppose I better say “yet.”

DE SAM LAZARO: Leslie Burke says his case is purely humanitarian, not religious, and his request simple — to die from his disease, not from thirst or starvation.

Mr. BURKE: I do not want the end of my life hastened in any way, just to be treated with as much respect and dignity as possible. That’s all I’m asking for.

DE SAM LAZARO: Late last month, an appeals court overruled the first court ruling, saying that Burke can expect his wishes to be granted from existing guidelines used by doctors. Burke’s lawyers are considering a direct appeal to the House of Lords.

Regardless of the outcome, the Burke case has helped raise an awareness about end-of-life care, one of the costliest and thorniest issues in modern medicine. In the end, that is, whose decision is it to stop life-prolonging treatment, the doctor’s or the patient’s? Increasingly, that decision may well have to come from a court.

For RELIGION AND ETHICS NEWSWEEKLY, this is Fred de Sam Lazaro in London.

SEVERSON (March 10, 2006): We talked to Leslie Burke this week. The House of Lords decided not to hear his case. He now hopes to bring it to the European Court of Human Rights in Strasbourg by June.

This story originally aired on Religion & Ethics Newsweekly on Aug. 26, 2005. A British court ruled that a doctor can decide when to terminate a patient’s life. Correspondent Fred de Sam Lazaro reports on Leslie Burke who suffers from cerebral ataxia and will eventually lose his ability to speak and swallow. He is concerned that doctors will choose to end his life against his wishes.