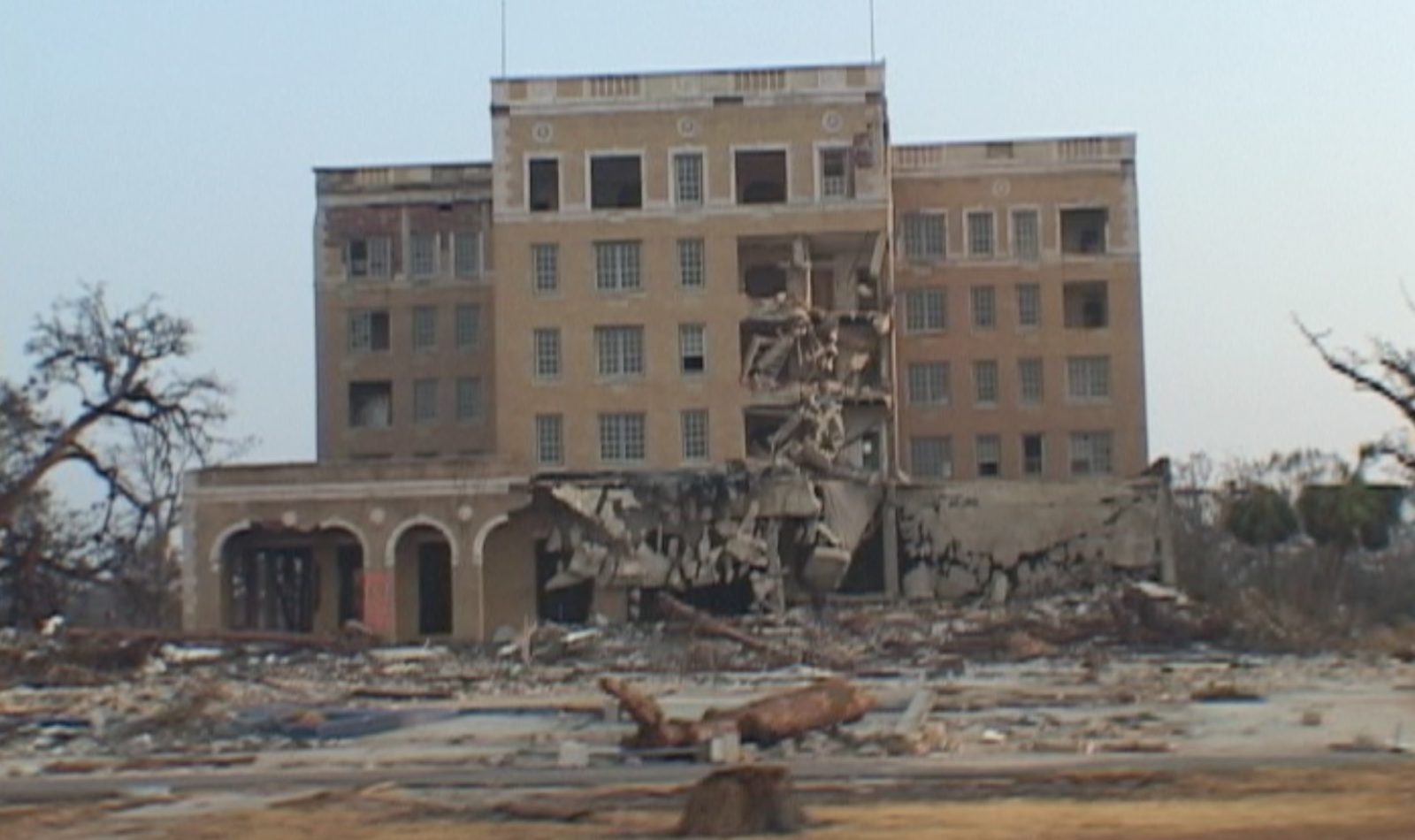 FRED DE SAM LAZARO: One local air force veteran said it looked like it’s been carpet bombed. Biloxi’s giant casinos employed 10,000 people and drew millions of tourists. Katrina took out Biloxi’s biggest monuments and its smallest, not even the dead were spared.

Less than a week ago this was a neighborhood of some of the sturdiest, stateliest oceanfront homes in Biloxi, homes that have withstood hurricanes for well over a century. Today, they lie in a vast wall of debris. Police aren’t sure that all of their occupants escaped or evacuated in time.

This morning Christine Fox came to keep her friend Ida Punzo company. Punzo rented a top floor apartment, about all that survived in this old home. They’ve been spending the days guarding against looting with plenty of time to think about the narrow escape.

CHRISTINE FOX: We are all right. We are still alive and darned grateful to be alive.

FRED DE SAM LAZARO: They managed to escape through the back door.

CHRISTINE FOX: We’re a very proud people. And we don’t ask anybody for anything. And we would rather not have than to ever ask anybody. But the last week, almost, we’ve had to find places to sleep, ask people for water, beg for food. We’ve had to depend on other people, walking by. It’s very humbling.

FRED DE SAM LAZARO: Humbled and grateful for their lives, survivors have spent the five days since Katrina in long, long lines for life’s most basic necessities — for gasoline — and for a hot meal, courtesy of the Southern Baptist Convention, which got here early tapping, a vast volunteer corps from throughout the Southeast. Vernon Boteler is the team leader.

VERNON BOTELER, Southern Baptist Convention: Now I understand that our president has said that they were going to send 400 trucks into this area. That would be great. But we haven’t seen it. All we’ve seen is people in need.

FRED DE SAM LAZARO: For water and ice it is another long line.

Loud cheers greeted the truck’s arrival, just in time for a rain shower which almost seemed to go unnoticed. Slowly supplies and help are beginning to arrive from outside the region, until now many communities and neighbors have had to make do with what little they have.

At the Main Street Missionary Baptist Church people came in to give food as well as get it.

ALPHONSE GRAVES, Church Deacon: Whatever they got in their house, the canned goods, they are bringing everything. You know, when they bring it to us, we open it up, and we cook it for the rest of the people.

FRED DE SAM LAZARO: The church’s sanctuary was demolished by the storm but on the day Katrina hit as the water rose, the upstairs community room became a different kind of sanctuary.

ALPHONSE GRAVES: We had a whole lot of elderly people in the church that we had to bring from the bottom stairs up to the top floor. So, you know, me and the rest of the pastors.

FRED DE SAM LAZARO: Biloxi’s high school is the main shelter, perhaps the only one in town. There’s some water and food, but no electricity, and for a lot of desperate people no information.

OLDER WOMAN: I’m looking for my daughter and grandchildren.

WOMAN: So I could see that my family and my girls– I have one in Virginia– and the rest of my family is in California, my mom and everybody.

FRED DE SAM LAZARO: Joseph Brooks was among the lucky ones. In the school parking lot, he managed to borrow a cell phone, and– small miracle– get through to a sister in Missouri.

JOSEPH BROOKS: She told me I ought to get down on my hands and knees wherever I’m at or was at and thank God that I’m still sitting here, talking and alive.

FRED DE SAM LAZARO: In a city preoccupied with survival, it will take time to fully grasp the scope of this tragedy. It will take a lot more time to repair it. For months, perhaps years, relief work will take the place of casinos as Biloxi’s economic lifeline.

Weeks after Katrina came ashore in Biloxi, Mississippi that town is still reeling from the aftermath. They have been struggling to get by as promised supplies have failed to reach them.