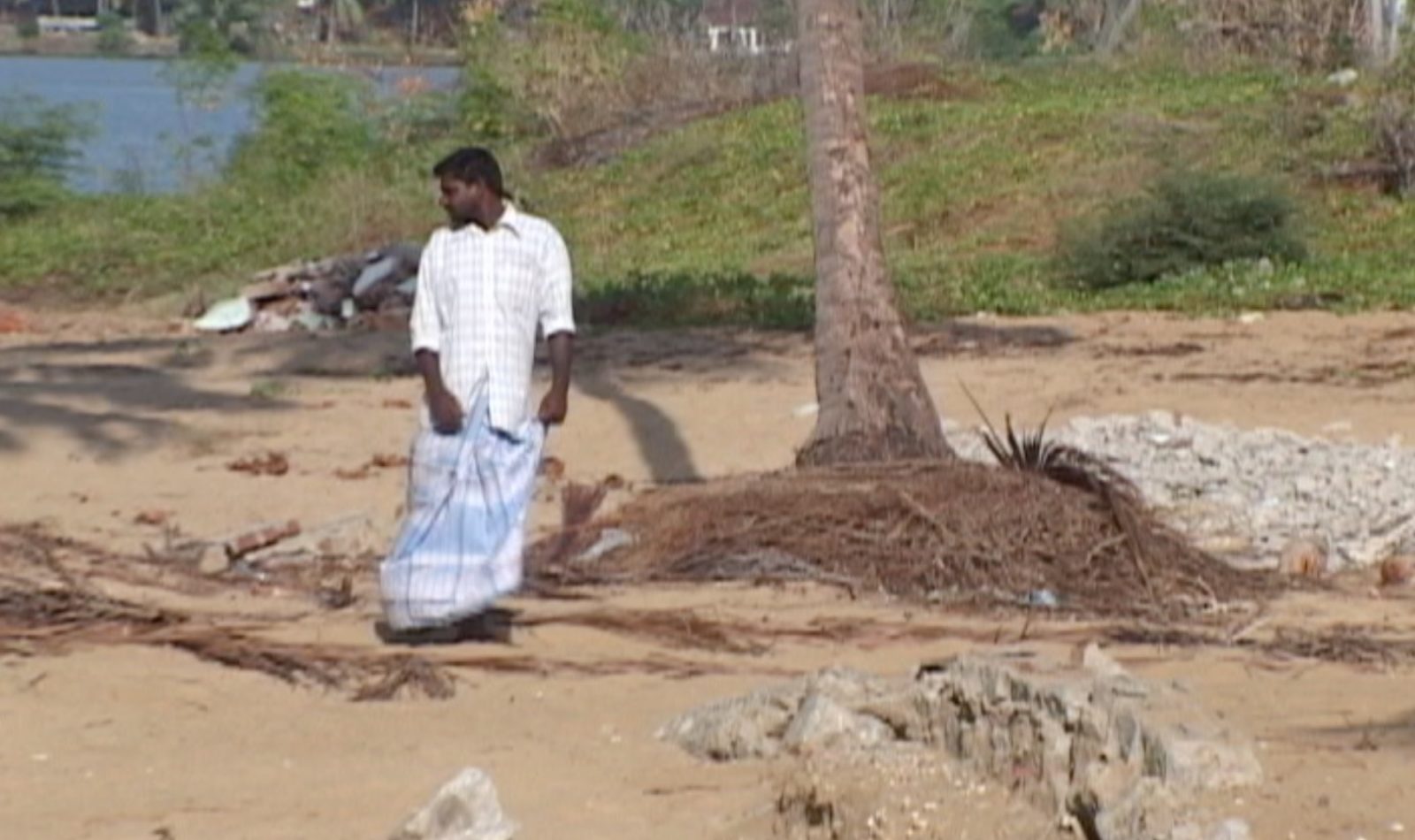 After the Tsunami: Sri Lanka

FRED DE SAM LAZARO: Seerithambi Rajendran remembers the tsunami like it happened yesterday. “I rushed home when the waters came,” he says. But there was no sign of his family and barely a trace of the home he shared with his wife and three children.

Two days later, he found his wife’s body in a hospital morgue; he never found his children. They were among countless victims whose bodies were never recovered or were buried with out identification to prevent the spread of disease. In all, about 31,000 Sri Lankans are thought to have died in the tsunami.

Survivors like Rajendran have struggled. He tried to commit suicide. All he now owns from his former life are these two pictures.

SEERITHAMBI RAJENDRAN (Translated): The one on the top came from my sister’s house. The other one was discovered in a photo album that had washed to the other side of the lagoon. Someone recognized it and brought it to me. It’s the only picture that survived from the album.

FRED DE SAM LAZARO: What he does have, unlike most other people here, is his livelihood back on a team of fishermen. They have new nets and a boat from its namesake, Rebecca Walker. She’s a British graduate student, who raised money from friends and church back home.

REBECCA WALKER: The main thing they needed was not motivation or anything like that, but to be busy. They needed to be given an option so that they could keep themselves busy and their minds active because at the time I met them, they were sat in refugee camps or in their broken homes just with nothing, and just basically, just thinking about what had happened.

FRED DE SAM LAZARO: Walker is among hundreds of individuals and agencies who have brought millions of dollars to Sri Lanka in the global outpouring of sympathy after the tsunami. It’s brought train service back, but the old train, in which more than 1,000 people drowned, stands as a symbol of the tsunami’s enormous toll.

Up and down Sri Lanka’s coast, emergency relief has become the main industry, providing food, sanitation and temporary work and housing. Yet the need seems impossible to fully meet.

In this village of Wehamula, Madhuri Jayasekere showed us through her two-room temporary home that’s shared by an extended family of 12.

MADHURI JAYASEKERE (Translated) There is not enough room for 12 people. It is too small. The government promised us a permanent home in three months but we have not gotten anything.

FRED DE SAM LAZARO: Still, they are luckier than many neighbors who must make due with tents.

MAN (Translated): In the rainy season the water seeps right in.

FRED DE SAM LAZARO: These people said they’d received some help soon after the tsunami, but almost nothing for months. They’ve survived on occasional day labor and food handouts. But the local official overseeing aid insists these people are squatters who moved into vacated tents, not really affected by the tsunami, he said, and so not eligible for aid.

One of the grim tasks for aid workers is to distinguish tsunami victims from just plain poor people: Victims of 20 years of bitter civil war between the Tamil-speaking Hindu minority and the Sinhala-speaking Buddhist majority, a war that has drained Sri Lanka’s economy.

Jude Simeone is with a group of evangelical churches who’ve aided displaced people before and after the tsunami.

JUDE SIMEONE: There this enormous support came to its tsunami victims, but there are 800,000 refugees living in refugee camps and they’re displaced in various places.

We have a fear that we are going to create a social imbalance in terms of the tsunami victims and the war-affected people.

FATHER BENJAMIN MILLER: Almost every group sees the things they don’t have and they know someone else who has what they would like to have. And they consider that they’re being exploited or denied and that runs all the way down the coast wherever the tsunami hit.

FRED DE SAM LAZARO: The Rebel Liberation Tamil Tigers, a group that became known for suicide bombings in the 1980s, controls much of the Northeast.

Their war to turn it into a separate nation costs thousands of young lives before an internationally brokered cease-fire two years ago. The Tigers, also called the LTTE, have insisted that they, not the Sinhala-dominated government, supervised all the aid efforts here.

Father Miller says that could doom those efforts.

FATHER BENJAMIN MILLER: Quite a number of governments that are giving money have been very specific that “We will not put any money in the hands of the LTTE because we have already declared them a terrorist group.”

FRED DE SAM LAZARO: Some $3 billion has been pledged but not yet delivered by various governments and the wrangling over a share of it has raised tensions again and threatened Sri Lanka’s cease-fire.

The government blamed the Tamil tigers for the assassination in August of Sri Lanka’s foreign minister, a charge the LTTE denies.

But there are almost daily reports of political murders and of abductions of children to serve as soldiers, a trademark LTTE tactic.

PATTIPILLAI VELLUPILLAI (Translated): They come on motorcycles and just take the kids away on the back of motorcycles. A lot of parents don’t even let their children go to school because they are afraid. One 16-year-old boy was taken from here just yesterday.

FRED DE SAM LAZARO: So far, politics, war, and bureaucracy haven’t significantly hindered emergency relief, but aid workers worry that the deteriorating security will drive away agencies and the money for the long-term rebuilding to bring jobs and permanent homes.

Almost a year after a tsunami devastated the Sri Lankan coast, progress is still slow in coming. Progress is being hindered in part due to the large displaced population from years of civil war. Others fear that aid money will go to fund Tamil Tiger rebels.