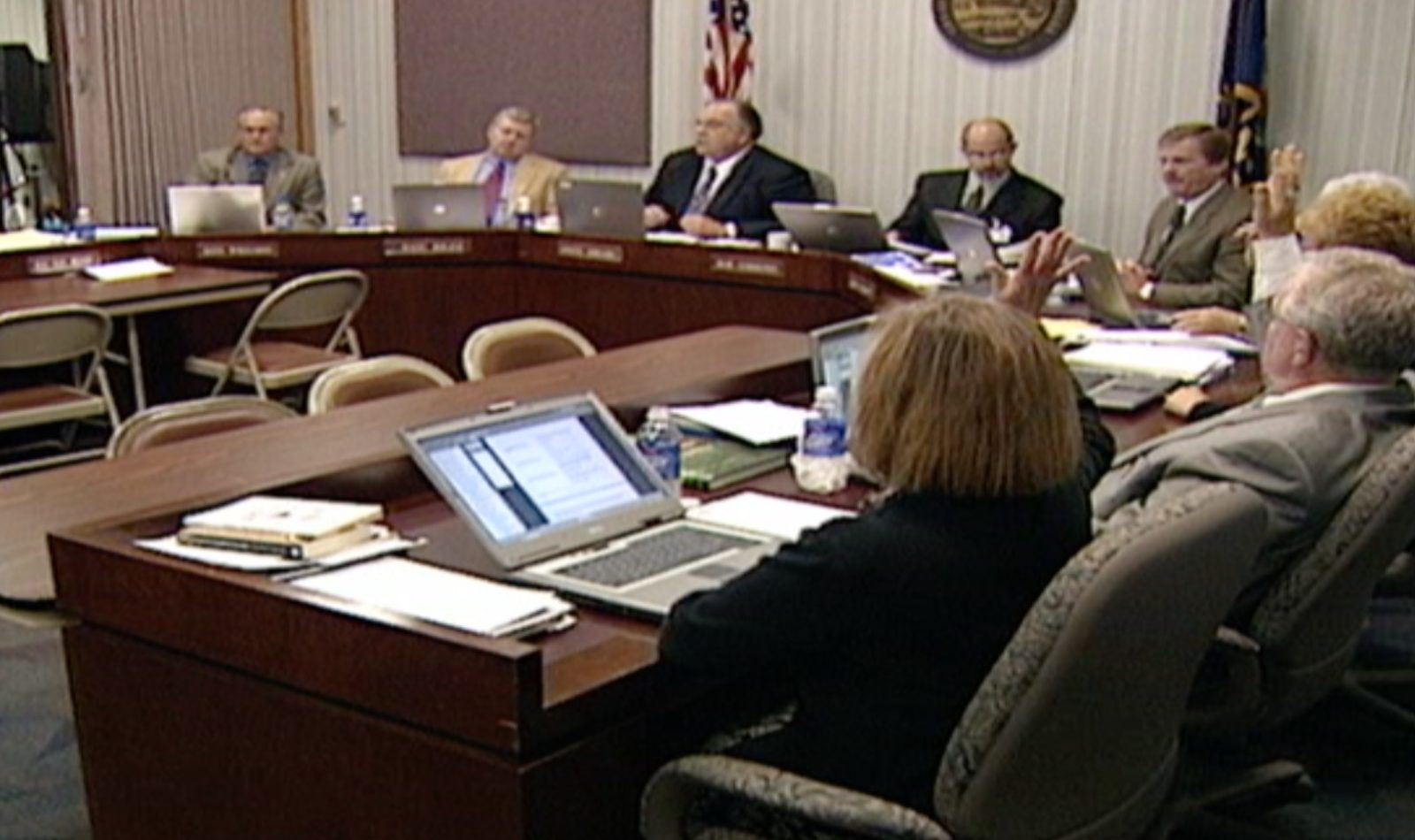 FRED DE SAM LAZARO: Dover, Pennsylvania, population 22,000, has long been a farm town. In recent years it’s become a bedroom community for people who work in the Baltimore area. They all came for the quiet, conservative lifestyle. And these days barber Mike Myers says they want it back

MIKE MYERS: It’s a small town. And we never had this much attention you know, we’re not used to it.

At first it was like, oh this is pretty neat, what’s going on here. And now it’s like, jeez, it’s all the time. It’s time to pack up and get another subject.

FRED DE SAM LAZARO: The subject that put Dover into the national spotlight was intelligent design. In 2004 Dover’s solidly Republican school board asked 9th grade biology teachers to add a statement about intelligent design when they taught evolution.

DAVID NAPIERSKI, Former School Board Member: Which basically stated that in that statement, the evolution had gaps in it, so therefore to fill in those gaps, they felt that there was another theory out there from a scientific standpoint that could be reviewed, and that was called intelligent design.

FRED DE SAM LAZARO: Former school board member David Napierski said the change broadened student’s understanding about human origins. Intelligent design supporters say some biology is so complex it could only be the result of design. No designer is identified, but critics say intelligent design is simply creationism in disguise.

The school board’s action drew national media and legal attention. The American Civil Liberties union filed a suit on behalf of a group of parents.

RICHARD THOMPSON: It is the ability of school boards to allow public students to know about other theories besides Darwin’s theory.

FRED DE SAM LAZARO: After weeks of testimony in the lawsuit, but before the judge could rule, voters in Dover delivered their verdict on election night, Nov. 8. All eight members of the school board who were up for re-election were defeated. John Altman is a political scientist at York College.

JOHN ALTMAN: I think a lot of the voters felt like the school board had, in a way, maybe embarrassed the community, you know, brought unwanted attention to the community, made the community seem like it was a backwards, you know, rural place. And I think they sent a message that that’s not what Dover, Pennsylvania, is about.

FRED DE SAM LAZARO: Ironically, he says voters in Dover probably supported the teaching of intelligent design alongside evolution. Polls show a majority of Americans do. And newly elected board members like Terry Emig and Bernadette Reinking said it was an emotional issue for many voters.

TERRY EMIG: You had the certain individuals, you knocked on the door, you minute they told you who you were, no, we don’t like you, goodbye, and shut the door.

BERNADETTE REINKING: Sometimes they would get so upset that we would just laugh and say, did you see his neck get all —

JUDY McILVAINE: There was a man that came out and did a monkey dance for me.

FRED DE SAM LAZARO: As strong supporters of evolution, they say they were often branded as atheists.

BERNADETTE REINKING: All of us, I know we are all Christians. And so it is just sometimes I wonder exactly what the problem is because all of us believe in God and so, you know, that’s not — it’s really not a question with us.

JUDY McILVAINE: It seems to be possible both to believe in God and to accept the theory of evolution because one is about belief and faith and the other is about science and education.

FRED DE SAM LAZARO: The lawsuit may have put ousted school board members, most of them devout proclaimed conservative Christians.

FRED DE SAM LAZARO: Yet in court board members argues that the new curriculum and intelligent design were all about academics and science, and not religiously motivated.

FRED DE SAM LAZARO: That decision to separate their religious beliefs from their legal arguments likely turned off some of their supporters, According to Dennis Hall, a pastor at Dover’s Friendship Community Church.

FRED DE SAM LAZARO: That would have been a legally fatal thing to do, would it not?

REV. DENNIS HALL: Yes, certainly, I understand why they said that. But the reasoning behind it, the feeling behind it, I think, is because of their values, their religious values.

SPOKESMAN: There are people that continue to misunderstand intelligent design, and those people who felt it was religious in nature felt, okay, school board members, we think this is religious in nature. You need to push this on a religious platform. So therefore there were people from religious standpoint that were angry.

FRED DE SAM LAZARO: The new members say they are aware of that anger and division, even though it looked like a clean sweep, Judy McIlvaine says only a few hundred votes separated the two sides.

JUDY McILVANE: This was hardly a landslide victory. Almost half the voters did not vote for us. And we have to be very mindful of that going forward. And we know that.

FRED DE SAM LAZARO: And McIlvane and colleagues on the new board say intelligent design does have its place in the classroom, just not in science class.

BERNADETTE REINKING: I would like to see it put in a philosophy class or a world history class, as an elective so that all religions can be discussed.

ROB McILVAINE: There is such a need for multicultural understanding across the gamut of religions, whether it is the Muslim faith, Judaism, Christianity, Buddhism, Hinduism, et cetera, et cetera, et cetera. And I think intelligent design as a topic needs to be placed in that context as was said earlier so that it can, perhaps, galvanize some discussion and awaken some understandings and some tolerance that might not otherwise be the case.

FRED DE SAM LAZARO: In the end, the words of one national broadcaster may do more than anything else to unify people in Dover. Televangelist Pat Robertson.

REV. PAT ROBERTSON: I would like to say to the good citizens of Dover, if there is a disaster in your area, don’t turn to God. You just rejected him from your city.

SPOKESMAN: I think there is only one piece of his statement I even agreed with. And once again as he started off with the good citizens of Dover, I think he should have let it rest there.

FRED DE SAM LAZARO: The Robertson statement revived some people’s sense of humor, as when our interview was interrupted by a phone call.

JUDY McILVANE: Just wanted to tell you there was a tornado warning.

FRED DE SAM LAZARO: The new board members take office Dec. 5 and say they will look to a legal higher power before making any decisions on curricula changes.

JUDY McILVANE: The judge’s word — whatever it is — going to carry great weight. And I think it’s going to — to do some work toward helping the community start to heal because that will, you know, it’s not a school board saying, well, hey, this is how it is going to be.

This is a judge making a ruling on a case where both sides got to present their side, fully. This should bring some closure at least for our community. I’m sure there are many other communities throughout the United States that will be waiting for this verdict with great interest.

FRED DE SAM LAZARO: The judge’s verdict in the Dover lawsuit is expected in early January

The small town of Dover, PA hit the national spotlight when its school board members asked all science instructors teaching evolution to include a statement describing some of the limits to evolutionary theory. In the recent school board elections, all members up for reelection were voted out. As a case works its way through the courts about this issue, the town of Dover will continue to be a focal point for the debate over evolution in the classroom.