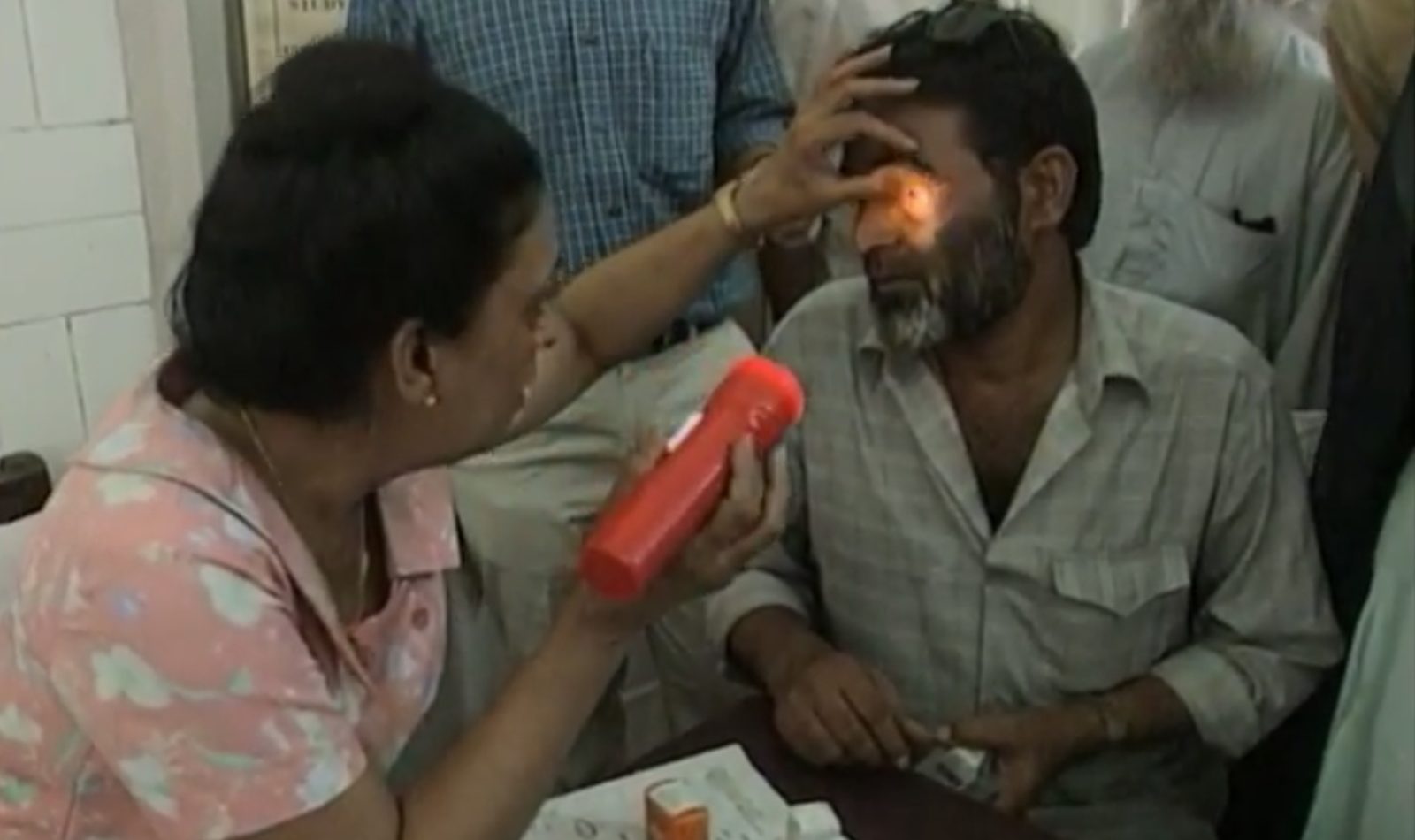 FRED DE SAM LAZARO: They hold outpatient eye clinics three days a week at St. Georges, one of the oldest public hospitals in Mumbai or Bombay. Dozens of patients vie for attention from doctors like Yasmin Bhagat.

DR. YASMIN BHAGAT, Ophthalmologist: On an average day, we see maybe about 200 patients, some old, some new, some operated, some with some medical problems of the eye.

FRED DE SAM LAZARO: None for more than about five minutes. The Spartan assembly line care may reflect the grim reality of India’s poverty but that’s not how Dr. Vidya Acharya, a clinician and researcher, sees it.

DR. VIDYA ACHARYA, Nephrologist: We are very rich in our clinical materials. So what if we are poor –

FRED DE SAM LAZARO: What do you mean by clinical material?

DR. VIDYA ACHARYA: Variety of disorders that we see.

FRED DE SAM LAZARO: Lots of people with a great variety of diseases.

FRED DE SAM LAZARO: That claim has drawn the attention of multi-national drug companies. Clinical trials are a tedious, expensive and critical phase in the development of new drugs and companies from Pfizer to Glaxo have begun moving them to India, drawn by its large supply of scientists, doctors, and most of all, patients.

More than 30 million people in India suffer from heart disease. At least that number are diabetic and tens of millions suffer from various forms of cancer and psychiatric disorders.

DR. VIJAI KUMAR, Neeman Medical International: India can give you one third more patients in one third less time.

FRED DE SAM LAZARO: Dr. Vijai Kumar, who heads a three-year-old research firm, says not only is drug development sped up but Indian patients make good trial subjects for new pharmaceuticals because most have never taken any other drugs. He says India, unlike developed countries, has more patients with untreated advanced diseases like cancer.

DR. YASMIN BHAGAT: For example, a patient with conjunctivitis, I may normally just spend about three to four minutes examining him but when you’re in a clinical trial, we see them in a much, much greater detail. We have to take the swabs, which one doesn’t do for everybody, so it’s very time consuming but it’s quite exciting and we do learn a lot also and it does help the patient also.

FRED DE SAM LAZARO: But the idea of patients enrolling because it’s the only way they can get good care or any care troubles ethicists like Dr. Jeffrey Kahn at the University of Minnesota Medical School.

JEFFREY KAHN: Certainly it’s not the job in the pharmaceutical industries around the world to provide health care for the masses. That’s not their role. But by the same token, they shouldn’t be going in and taking advantage of the dire straits of people to do clinical trials more cheaply, take advantage of the straits and expose these people to risk in ways that will only benefit people who are in rich countries thousands of miles away..

FRED DE SAM LAZARO: A central tenet of clinical research is that it should benefit the larger society. And Kahn says there cannot be two societies, one taking the risks, the other the benefits.

JEFFREY KAHN: There needs to be some assurance that the benefits of it would go to the population from whom the participants come, so that the drugs would be used, say, in diabetics in India if it was a diabetes clinical trial using Indian subjects, and not to develop a new drug that would be used in western Europe and the United States solely.

FRED DE SAM LAZARO: But the company’s doing clinical trials here say doing the research in India will lower costs and make drugs affordable to everyone, including Indian patients.

DR. SWATI PIRAMAL: In the year 2010 there are going for more diabetics everywhere in the world, most of them will be in India. And I think the drugs which are being developed in India and will not only benefit our country but will benefit people everywhere at an affordable cost and very good quality.

FRED DE SAM LAZARO: Questions of quality worrisome experts. Will people desperate to enroll just to get health care lie about their medical histories? Will doctors take advantage of patients whose poverty and illiteracy make them especially vulnerable in India?

In November, the Indian government announced plans to register and then monitor all clinical trials in the country, also to create laws to enforce ethical guidelines.

But even with laws on the books, India has seen widespread abuses in medicine. For example, millions of ultrasound scans are done solely to abort female fetuses. Kidneys are routinely purchased from poor people for transplantation.

For their part, clinical trials companies say it is in their business interest to conduct trials cleany, to ensure subjects are protected from undue risk and given sufficient information to give truly informed consent. Many international pharmaceutical companies seem sold. Whether it’s good for the Indian public or not, analysts say as many as 2 million Indians may be enrolled in research trials by 2010. Just three years ago that, number was perhaps 2,000.

The decision by many pharmaceutical companies to conduct clinical drug trials in India, a country with a large number of scientists, doctors and patients has sparked an ethical debate over whether the trials will benefit the participants, many of them who are poor and cannot afford medical attention otherwise.