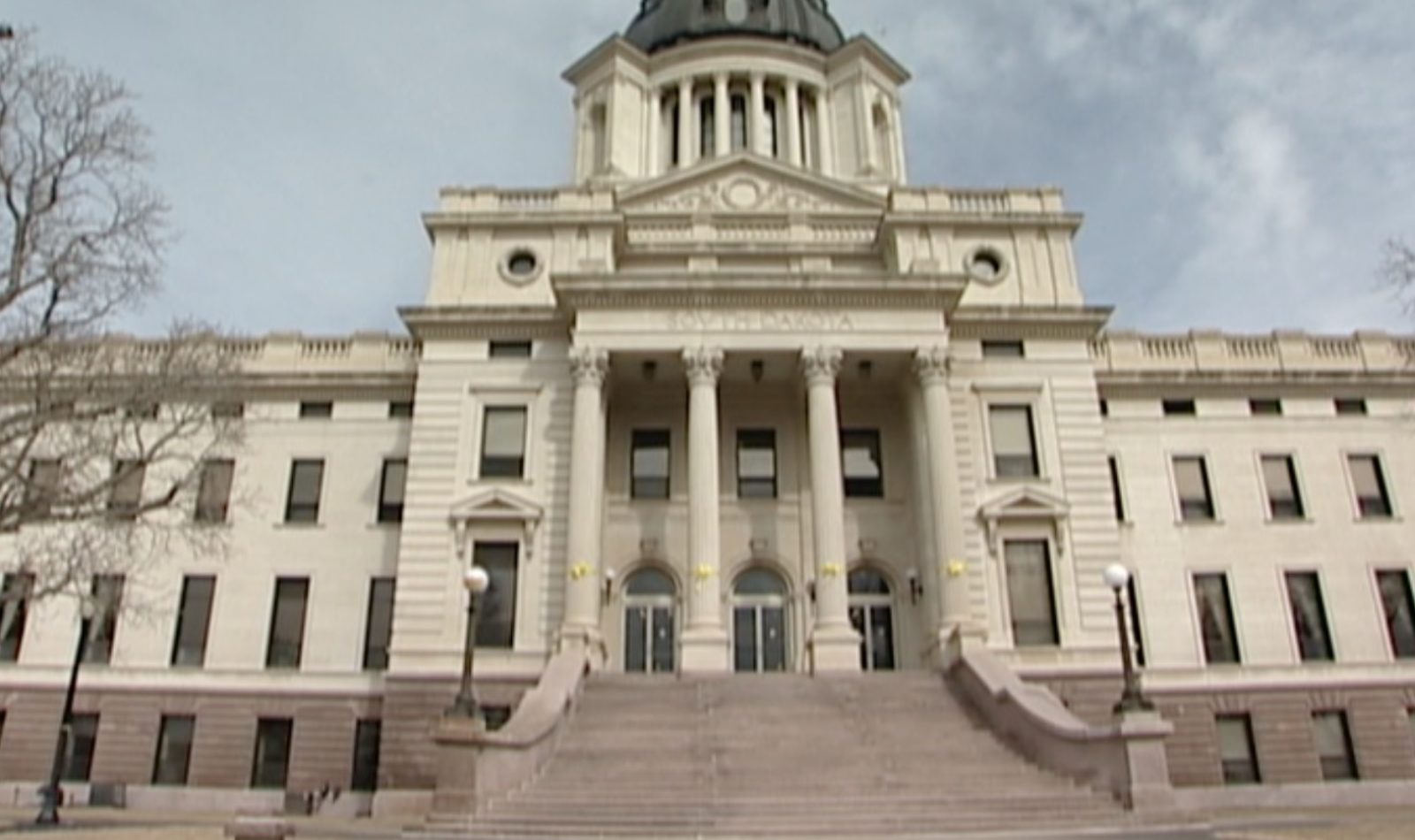 FRED DE SAM LAZARO: Just three-quarters of a million people share a lot of space in South Dakota. They share a single area code and a small capital. But lawmakers in Pierre have put South Dakota in the vanguard of a renewed campaign to outlaw abortion.

STATE SEN. JULIE BARTLING (D): There is a movement across this country on the wishes to save and protect the lives of unborn children. As you know, Justice Roberts and Justice Alito were just favorably placed on that board. There is still another chance that President Bush will have to place another justice on that bench. I think it’s time to pass House Bill 1215 and protect the lives of the unborn.

FRED DE SAM LAZARO: Citing what they see as a more receptive or antiabortion high court, lawmakers easily approved a sweeping ban on the procedure, one that declares that life begins at conception.

South Dakota’s law makes it a crime for a doctor to perform an abortion unless the mother’s life is endangered. There are no exceptions for cases in which a mother’s health may be threatened or cases in which the pregnancy results from rape or incest.

STATE SEN. BILL NAPOLI (R): You know, I we are really think we’re pushing the envelope on that issue. I’m not sure that the Supreme Court is ready for us yet, but what’s that old saying, “There’s no time like the present”?

BILL NAPOLI: The most important part of this bill is that, if Roe v. Wade is overturned, states’ rights are returned to us to decide what to do about abortion

FRED DE SAM LAZARO: Already, South Dakota is perhaps the most difficult place in the country to get an abortion. There’s a 24-hour waiting period and mandatory counseling to discourage the procedure. The law requires parental notification in cases where the patient is a minor. Only one clinic, Planned Parenthood in Sioux Falls, offers the procedure.

FRED DE SAM LAZARO: Often patients must drive past picketers. No local doctor will go near this clinic…so, one day each week, a physician flies in from Minnesota to provide abortions. It’s a cause that drew Dr. Miriam McCreary out of retirement.

DR. MIRIAM MCCREARY, M.D.: I just remember from my practice how desperate women were, and I just wanted to be available to give them a safe abortion. There are doctors who can’t do this, emotionally, possibly. But for me, I put myself in their position, and I want to treat them the way I’d want to be treated myself.

FRED DE SAM LAZARO: One patient she saw was this woman, probably in her early 20s. She would not reveal even her age. With a low-paying job and two children, she said she simply could not afford a third.

“MICHELLE,” PATIENT WHO TERMINATED HER PREGNANCY: It was difficult when I found out I was pregnant. I was saddened, because I knew that I’d probably have to make this decision. Like I said, I have two children, so I look into their eyes and I love them. It’s been difficult, you know; it’s not easy. And I don’t think it’s, you know, ever easy on a woman, but we need that choice.

FRED DE SAM LAZARO: She drove here from more than five hours away. Besides legal and social sanction, distance is a big hurdle for many patients, one that will get even bigger if the new law takes effect.

SARAH STOESZ, PLANNED PARENTHOOD: This proposed ban is a reprehensible attack on women’s health care in South Dakota and across the country; it makes a bad situation completely intolerable for women.

STATE SEN. DAVE KNUDSON (R): Even if recently confirmed Chief Justice Roberts and Justice Alito do not ultimately find Roe v. Wade to be settled precedent deserving of retention under the doctrine of stare decisis, but rather vote to overturn Roe v. Wade, there is still a 5-4 majority of the court, as presently constituted, to support Roe v. Wade. I do not believe it makes sense for South Dakota to lead the charge on this issue when we know the outcome.

FRED DE SAM LAZARO: Others said the bill simply went too far. Democratic Representative Clayton Halverson considers himself in the middle on this issue.

STATE REP. CLAYTON HALVERSON (D): In my opinion, the middle is: Allow the amendments we offered, which would include, in the case of rape, the option of abortion should be available; in the case of incest, the same thing goes; and when the mother’s health or the health of the fetus, those are exceptions that I don’t think should be ignored. And I believe that’s the middle. That’s where I think most of the people in our state fall.

BILL NAPOLI: My calls have been running 3-1 in favor of this bill.

FRED DE SAM LAZARO: Napoli says most abortions are performed for what he calls “convenience.” He insists that exceptions can be made for rape or incest under the provision that protects the mother’s life. I asked him for a scenario in which an exception may be invoked.

BILL NAPOLI: A real-life description to me would be a rape victim, brutally raped, savaged. The girl was a virgin. She was religious. She planned on saving her virginity until she was married. She was brutalized and raped, sodomized as bad as you can possibly make it, and is impregnated. I mean, that girl could be so messed up, physically and psychologically, that carrying that child could very well threaten her life.

GOV. MIKE ROUNDS (R), SOUTH DAKOTA: I firmly believe that the possibility of Roe v. Wade being successfully challenged by this particular piece of legislation today I think is very, very remote.

FRED DE SAM LAZARO: Rounds prefers a less sweeping approach to restricting abortion; he says it would more likely pass legal muster. Still, the governor said the new law would be a good thing as a rallying cry for antiabortion forces.

GOV. ROUNDS: For those individuals that would feel discouraged that say, “Gee, we could have eliminated Roe v. Wade, but we’ve never had an opportunity in the last 15 years to do so,” this is an opportunity to say, “See, there it is. The court may or may not, but it’ll take us three years to find out.” In the meantime, let’s continue to work at chipping away at Roe v. Wade one step at a time.

FRED DE SAM LAZARO: Democratic Representative Elaine Roberts is one of South Dakota’s few pro-choice legislators. What’s next, she fears, is a host of measures that regulate women’s private lives.

ELAINE ROBERTS: We already have a law that says that pharmacists by conscience could refuse to fill my prescription for contraceptives. There is already a move from some groups who have worked on this to say that there should be no contraceptives, that sexual intercourse is for the purpose of reproduction.

FRED DE SAM LAZARO: Much of what she fears as an assault on basic rights Senator Napoli sees as a return to traditional values.

BILL NAPOLI: When I was growing up here in the wild west, if a young man got a girl pregnant out of wedlock, they got married, and the whole darned neighborhood was involved in that wedding. I mean, you just didn’t allow that sort of thing to happen, you know? I mean, they wanted that child to be brought up in a home with two parents, you know, that whole story. And so I happen to believe that can happen again.

BILL NAPOLI: Yes, I do. I don’t think we’re so far beyond that, that we can’t go back to that.

FRED DE SAM LAZARO (voice-over): With the governor’s signature, the abortion ban is supposed to take effect July 1st. But legal challenges or a possible petition drive to put it on the ballot could delay the measure up to three years, if it survives.

The legislature in South Dakota, already one of the hardest places to get an abortion in the United States, has passed a sweeping ban on the procedure. Push for this bill came from the perceived change in the make up of the Supreme Court that would make overturning Roe v. Wade likely.