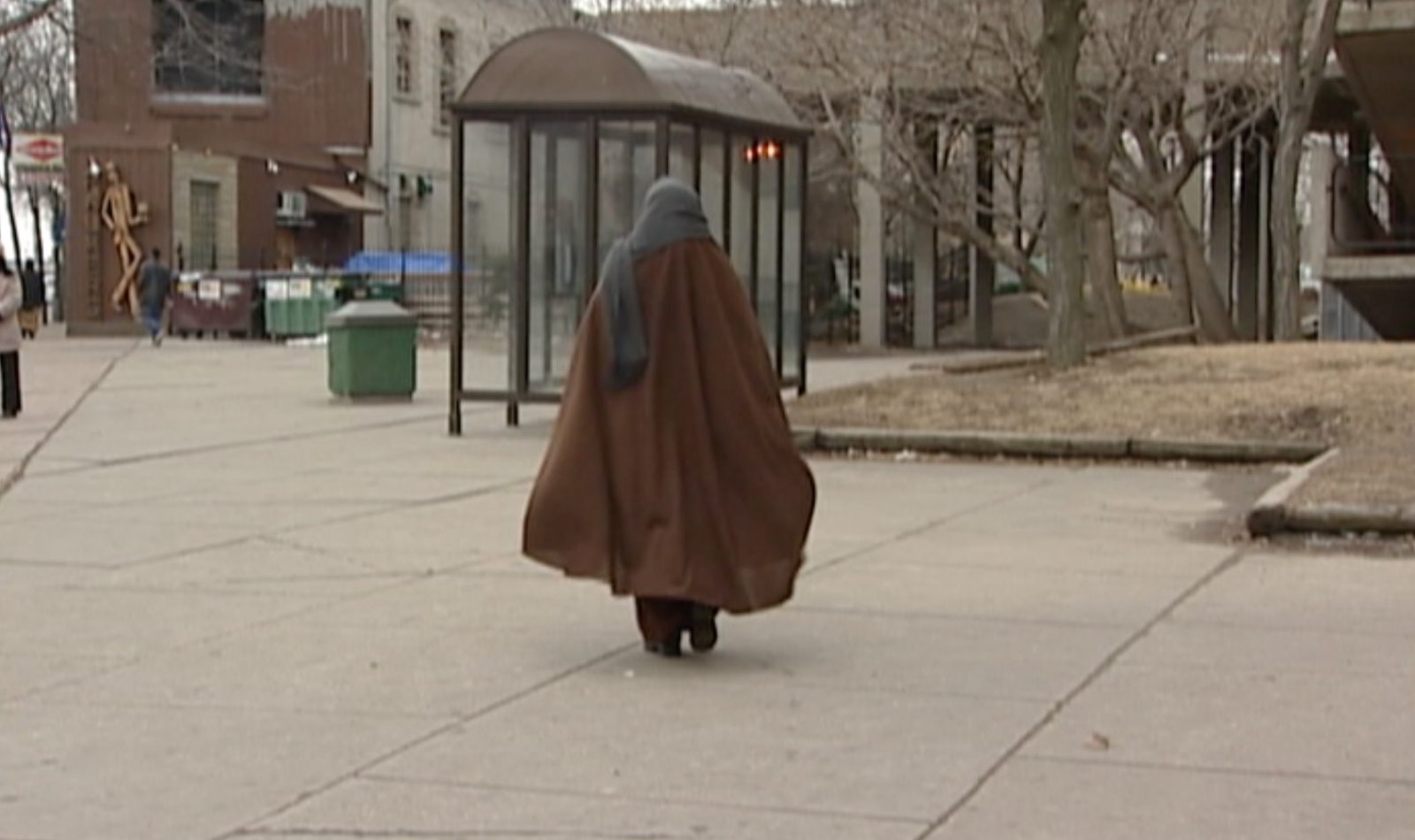 NANCY ANTOINE: Good morning. How are you?

FRED DE SAM LAZARO: But the students at its newest school, Prairie Elementary, come from around the world.

NANCY ANTOINE: We’ve got about 150 kindergartners this year, so we’ve got eight sections of kindergarten. Obviously, we have English, and Spanish, and Lao. We’ve got a very small — we’ve got a small population that speaks Amharic. And they’ve we’ve got just a small handful that speak Vietnamese and Chinese.

FRED DE SAM LAZARO: Not since the first settlers in the late 1800s have so many immigrants come to this small town. In those days, they came from Europe to farm; today, the magnet is meatpacking. Factories here depend almost entirely on immigrants. In Worthington, it’s the Swift plant, says Mayor Al Oberloh.

AL OBERLOH: They had 100 openings just recently, did 100 interviews. And of the 100, they had one Caucasian, two blacks, one Asian, and 96 Hispanics.

FRED DE SAM LAZARO: Most of the new immigrants who make up about a quarter of the town’s 11,000 people are here legally. But some are illegal, using forged documents to hide their status or get jobs.

Stolen or forged identity is one of the biggest immigrant-related crimes, according to Police Chief Mike Cumisky.

MIKE CUMISKY: We’ve had someone that’s been in our jail before, and then all of a sudden the records clerk looks and says, “Well, that’s not the name that this person had the last time.”

MELVIN PLATT: Too often, the patients come in using someone else’s identification. There’s a real chance that that patient could be given the wrong medication. We’ve gone from about $250,000 a year for bad-debt write-off up to — I think this year we’re projecting about $550,000 a year write-off. And those are for bills that we just can’t collect.

FRED DE SAM LAZARO: Worthington officials took their concerns to state political leaders to ask for tougher laws. Currently, it’s not a crime in Minnesota to possess a fake ID. The officials got an especially sympathetic ear from Republican Governor Tim Pawlenty, who faces re-election this year.

TIM PAWLENTY: If you look at the effects it’s having on criminal justice, on health care, on social services, on employment, as I said, you really have to have your head under a rock to not see that illegal immigration is a concern in this country, and even in places like Minnesota.

The governor also wants to set up a team of 10 state immigration officers to crack down on ID crimes, human trafficking, drugs, and terrorism. And Pawlenty asked legislators to overrule laws in the state’s two major cities that critics say provide safe haven to undocumented people.

In Minneapolis and St. Paul, police are not allowed to ask for someone’s immigration documents, unless it directly relates to their investigation. A police officer on a routine traffic stop, for example, can’t ask questions about the driver’s citizenship.

GOV. TIM PAWLENTY: And, for example, a year or two ago, there was an individual filming sensitive assets and infrastructure in North or South Carolina. He wasn’t doing anything illegal, but they were able to detain him because his immigration status was in violation of the law. It turns out he was a person of interest with respect to terrorism issues.

FRED DE SAM LAZARO: But many law enforcement officials, including those in Worthington and the Twin Cities, say they already have the ability to question people acting suspiciously. St. Paul Chief John Harrington says bringing immigration matters into a local cop’s routine would stir alarm among immigrants who are key partners in reducing crime.

JOHN HARRINGTON: Who knows the answers? Who knows the secrets of criminal behavior, whether it’s terrorism, drugs, gangs, or other acts of violence, within a community like that?

It’s the people that live in that community. We know from practical experience that, if we begin knocking on doors and asking people about their immigration status, we will dry up all the sources of information we have in immigrant communities.

FRED DE SAM LAZARO: Immigrant communities have grown at record levels in Minneapolis and St. Paul in recent years, drawn by a strong economy and the presence of church-based refugee agencies. They include perhaps the largest Somali population outside Somalia, other Africans, Southeast Asians, and Central Americans.

A majority of students in the two cities’ public school systems come from non-white backgrounds, and together they speak at least 55 different languages.

TEACHER: What color do you think that is?

FRED DE SAM LAZARO: A study released by Governor Pawlenty shows that educating the children of undocumented immigrants costs the state about $150 million a year, with another $30 million going to provide health and social services.

But Bruce Corrie, an economist at Concordia University in St. Paul, says that estimate doesn’t include the income and sales taxes paid by undocumented immigrants or the fact that there’s strong demand for their labor.

BRUCE CORRIE: There’s a database maintained by the Center for Immigration Studies of all the firms in the United States that were sanctioned by the old INS for using illegal workers. There were 1,000 Minnesota firms in over 69 counties, so a huge section of Minnesota. There is a demand for this kind of work in Minnesota, and we’ve got to acknowledge that fact.

FRED DE SAM LAZARO: The governor drew charges that he was anti-immigrant; he insists he’s not. And days after his proposed crackdown on illegal immigration, he proposed measures to help legal newcomers become citizens and start businesses. Despite that effort, columnist Nick Coleman says the issue has become muddied.

NICK COLEMAN: Minnesota has far less than the average number of illegal immigrants. It has — half of the foreign-born people in this state are actually refugees or asylum-seekers, and I think that there is some, on the street level at times, there’s confusion between asylum-seekers, and illegals, and naturalized citizens, and the rest.

FRED DE SAM LAZARO: It’s that confusion between legal and illegal immigrants that worries many in the immigrant communities, including Professor Corrie, himself an immigrant from India.

BRUCE CORRIE: Because of the nature of immigration, most of immigrants that come to this country are from Asia, or Latin America, particularly true to Minnesota. So how are you going to find out who is legal and who isn’t legal? And so someone like me, who might be walking down the street, is painted among this, in the formative perceptive of the public eye, as an illegal person.

MIKE CUMISKY: People keep calling us and asking us questions. I said, you know, “We didn’t do anything.” I said, “We’re just the two knuckleheads that told the emperor that he didn’t have any clothes on.” Our immigration policy is not keeping up with the economical needs of this country.

FRED DE SAM LAZARO: They also insist that immigrants should not be fearful. Mayor Oberloh says immigrant-run businesses have been key to Worthington’s revitalization.

MAYOR AL OBERLOH: I think, last count, 25. And they’re thriving, and they’re frequented by people that have been long-time citizens of Worthington. So I think, as far as that goes, there’s an acceptance. I don’t think there’s any rationale — at least I’ve never heard, “Let’s move ’em all out.” That’s not the case.

FRED DE SAM LAZARO: Worthington may be reconciled to changes brought by immigration, but there are indications that illegal immigration is becoming a concern.

For example, school officials called this meeting recently to ask the public’s help to balance their budget, because voters last November rejected a ballot measure to raise property taxes. One factor, the school superintendent said, is a perception the money would be educating children not legally entitled to be in this country.

Students from around the world