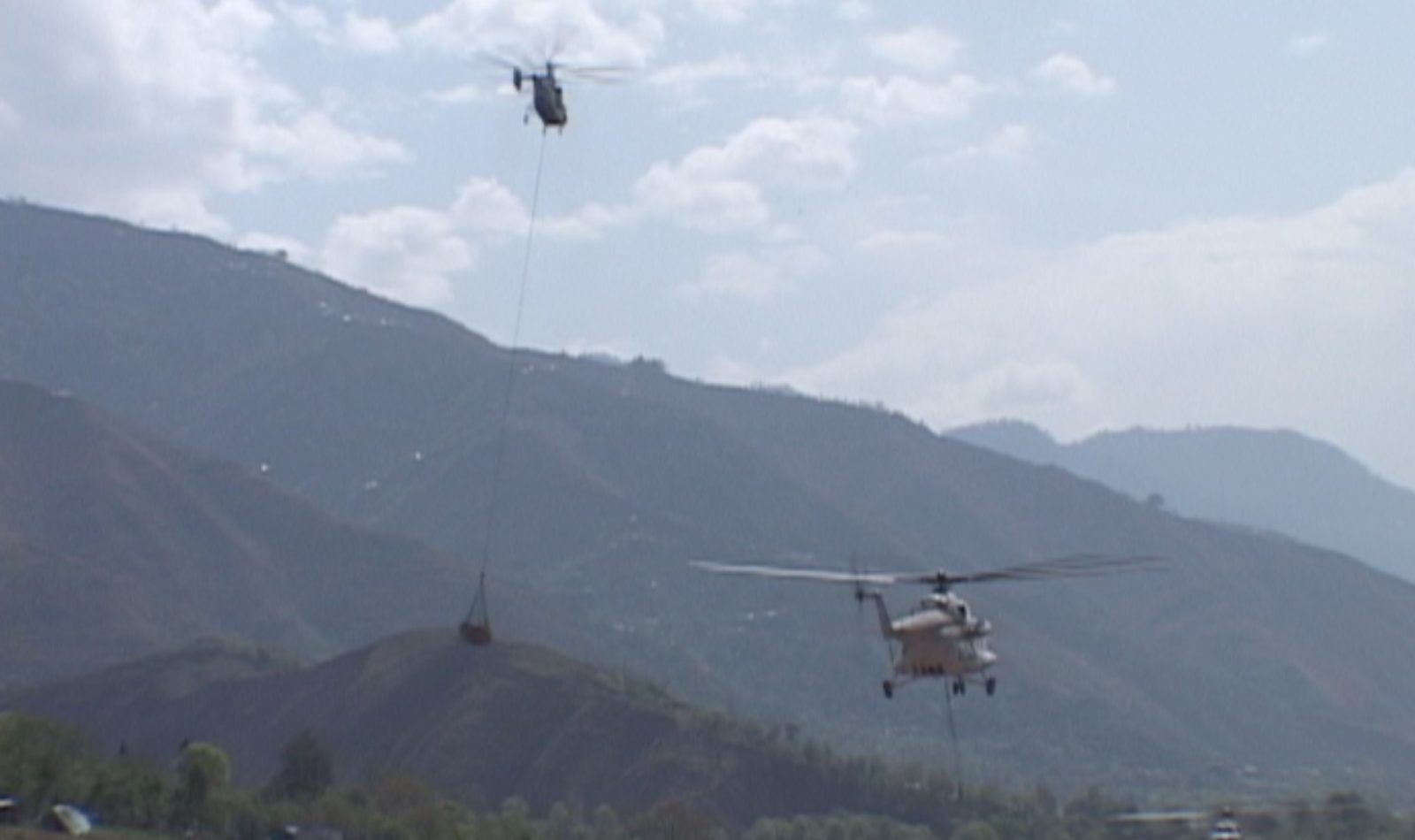 FRED DE SAM LAZARO:﻿There’s not even a terminal building at the airport in Muzzafarabad, but it has been the center of the biggest humanitarian airlift since Berlin, after World War II.The U.N., U.S., European Union, and Pakistan have been working here with one goal: helping the 3.5 million people left homeless by last October’s devastating quake survive the winter. Relief workers had feared a second wave of exposure-related deaths over winter, especially among those who remained in the remotest villages, places completely cut off after the quake.But after 30,000 tons of food and relief supplies were flown in, spring arrived, the catastrophe averted, says Keith Ursel, who heads the U.N.’s World Food Program here.

KEITH URSEL, World Food Program:One of the biggest emergencies here was how to get shelter to the people before winter. So, it — it — there was so much energy and energy put towards shelter and food that it was met. You know, the need was met, basically.

FRED DE SAM LAZARO:A mild winter was crucial to the success of the relief effort. In this village of Gaypur (ph), Shokira Jaan (ph) and her family got by with food aid in this tiny shed, built near their collapsed home. It has served as kitchen and bedroom for nine people.

WOMAN (through translator):We use the warm clothes that we had before the earthquake. It was difficult, but God provided.

FRED DE SAM LAZARO:Much of the energy in the relief effort was directed at getting people out of their destroyed mountain homes and into tent camps at lower altitudes, which were warmer and closer to supplies.Now the government says it’s time for them to go back. Altaf Saleem heads a committee the government set up to oversee the transition from relief to recovery.

ALTAF SALEEM, Earthquake Recovery Committee:We have to take people back to their own place. If we linger on too long, unnecessarily, in the tent, there’s a tendency to get used to easy supply of food, and this can create problems in the future.

FRED DE SAM LAZARO:To make sure people don’t become dependent on handouts, Pakistan’s government ordered all free food distribution stopped by March 31, except for those widowed or maimed in the quake. The government promised money to help build small homes, but only once people returned.

ALTAF SALEEM:The sooner they move to their homeland, the quicker they can start construction. This will help them make a shelter available to them before the next winter comes. I think we are looking at everybody moving to that place and starting their life in the next two months or so.I think 85 percent or 90 percent of people will move back and start some kind of construction.

FRED DE SAM LAZARO:That goal is supported by international agencies, which also have promised to provide seeds, farm tools and employment programs. But they think the recovery may take a lot longer.

KEITH URSEL:Most of them are going back to the same destroyed village or the same destroyed house or agriculture land that they left six months ago. That’s why they left. So, those people going back, we do consider them quite vulnerable. Some that were able to stay in some of their villages were able to build shelter for themselves and start repairing some of their farmland with terraces and the water supply. So, the hundreds of thousands of people that are returning now to their villages are faced with some really difficult times.

FRED DE SAM LAZARO:To ease the transition, relief workers are making sure returnees, like the family of Mohammed Din, are fit to travel, that they have adequate provisions.Darren Boisvert is with the U.N.’s Organization for Migration, IOM.

DARREN BOISVERT, International Organization For Migration:We ensure that they have their two months of rations, so we’re not moving anybody who is going to go hungry once they arrive. They’re allowed to take all of their personal belongings, but they’re also allowed to take whatever relief materials they have gathered to date, so, anything from tents to blankets to tarpaulins, tools, whatever they have managed to be given.

FRED DE SAM LAZARO:After hours of loading and waiting, the convoy headed north, to the Neelam Valley. Their treacherous drive is just one reminder of the continuing legacy of the earthquake.The quake moved massive quantities of earth, and much of it remains unsettled. Landslides are an almost daily occurrence, triggered by aftershocks or just rainfall. One of the biggest challenges in the months and years ahead is keeping the roads clear, so people can return, and also to maintain their only link to the rest of the world.Two hours later, Mohammed Din’s family was dropped off six miles from their former home. The last stretch is accessible only by foot and would take two more hours. For the moment, Din decided to join several relatives, who had earlier pitched their tents in this spot. While anxious to return home some time, he said he had no choice but to leave the camp now.

FRED DE SAM LAZARO:His next challenge is to find a lot to build on. Din lost not only his home, but, like many others, his land literally slid down the mountain.

MOHAMMED DIN (through translator):Never mind the money. There’s just nowhere to stand. The government said they would give us $150,000 rupees. If I can get land, that would be enough to build a house. But, until that time, we will live in a tent.

WOMAN (through translator):There are 10 people in this tent. The kids have no shoes, no clothes. It’s cold in the tents. And we sleep together under a quilt.

FRED DE SAM LAZARO:The extended family of Noor Jehan has been struggling to rebuild since last December. When we visited them then, they worried about the coming winter, living in a tent camp high above Muzzafarabad.Their homestead was only two miles further uphill, three collapsed buildings in which nine people died. They were buried in a cemetery across the street. Noor Jehan’s son Aslam stayed behind to protect the property, salvage what he could, and clean up.Four months later, he’s still pounding and clearing rubble. The family does have three temporary dwellings now, enough to sleep all 20 of them. But sleep does not come easily.

FRED DE SAM LAZARO:They also worry about how long it will take for the promised assistance to reach them. Government compensation won’t cover the rebuilding costs, they add, and materials, like sheet iron for walls and roofs, are hard to find and hard to transport to their mountain home.

ASLAM MOHAMMAD, Earthquake Survivor (through translator):The rain and storms are heavy here, and water comes in. We need corrugated iron sheets for roofing. That would be good, because, when it rains heavily, the water really comes in.

FRED DE SAM LAZARO:Pakistan’s government received $6 billion in international aid, money separate from relief aid, that is to be used for long-term rebuilding. How efficiently and transparently it spends that money will be watched closely, says the U.N.’s Boisvert.

DARREN BOISVERT:There is $6 billion. And, in a country like this, that’s a lot of cash to actually begin reconstruction. We need to make sure that that money is spent well, that there’s no corruption involved in that.

FRED DE SAM LAZARO:The Pakistan government says it will hire international auditing firms to oversee its expenditures. Out of the rubble of this tragedy, Altaf Saleem says, is a unique opportunity to rebuild a region and improve its standard of living. But it will take time.

ALTAF SALEEM:There are close to 6,000 schools that need to be built, 800 medical facilities, including basic health units, bigger hospitals.There are two universities that are to be built. So, I think a lot of money will go there in this transportation sector. We have to build some bridges, some roads, some waterworks, because you will realize that, you know, this infrastructure was built over a 58-year time frame, and collapsed in less than 58 seconds. You know, people expect that we will rebuild them in 58 days. It has to take longer.

FRED DE SAM LAZARO:First, the government hopes most people will rebuild their shelters by next winter. For many Kashmiris, that’s happening one timber at a time.Even as they stop serving tent villages, relief officials have contingency plans to at least reopen some next winter, just in case.

This story originally aired on PBS Newshour on April 10, 2006. Correspondent Fred de Sam Lazaro reports on the aftermath of a deadly earthquake and how the U.N., U.S., European Union, and Pakistan have been working to bring home the millions displaced by the quake.