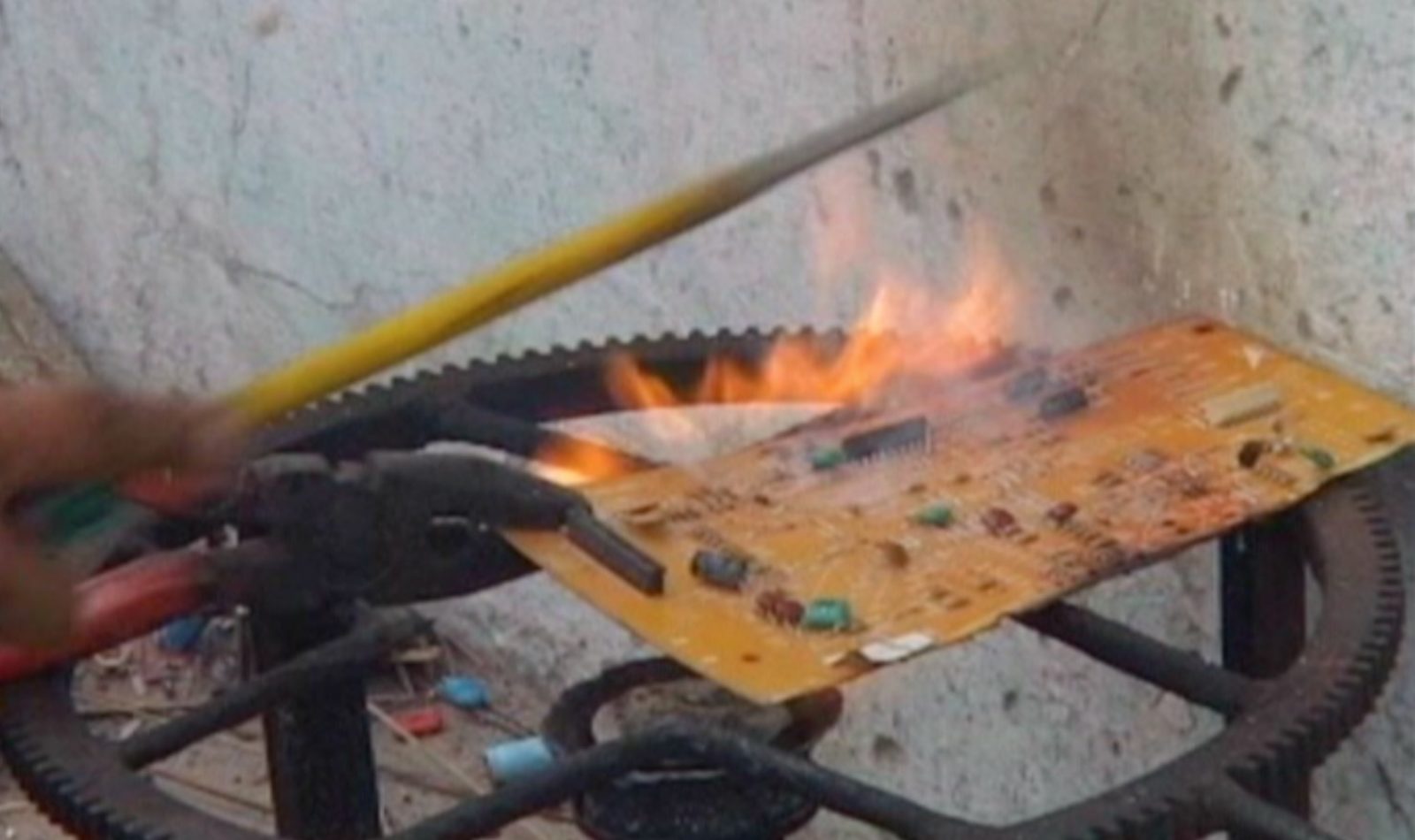 CALL CENTER OPERATOR: Can I have your card number, please?

FRED DE SAM LAZARO: … computers have become the lifeblood of India’s new economy, even defective computers. At this company, machines returned by customers are methodically diagnosed and repaired, business that would be unfeasible in higher-wage countries. Even in computers not repairable, there’s plenty of value. Many components, for example, are gold-plated.

TECHNICIAN: You notice we have the copper coils, the metal pieces, the aluminum can be recycled.

FRED DE SAM LAZARO: And recycling these metals has spawned a fast-growing and alarming new industry. Computer motherboards are literally cooked, which releases gold and copper, but also arsenic, mercury, lead, and other toxins.

These pictures were taken by the environmental group Greenpeace. Spokesman Ramapati Kumar says up to 5 million people work in this clandestine backyard trade.

RAMAPATI KUMAR, Greenpeace India: The recycling is highly dangerous in India, with all the operation and the procedure is still very primitive. And they are recycling just with their bare hand; they have no protection at all.

Ewaste from other countries

FRED DE SAM LAZARO: Greenpeace estimates that some 50,000 tons of e-waste are produced in India, that is computers and other hardware discarded as obsolete. But a much larger amount, harder to pin down because it’s illegal, is imported from rich countries, where Delhi activist Ravi Agarwal says recycling is much costlier.

RAVI AGARWAL, Toxics Link: It can cost $20 to $30 to dispose of one computer, just to throw it away in a proper way. Now, instead of that, if you then export the waste to a poor, developing country in Africa, China or India, you can actually make money off that waste.

So a trader will, instead of paying $20 to the local ecology to recycle the waste, can actually sell the waste, a computer, for $13 to $15. And the person who buys it will then bring it to a place like India and auction it off and make, you know, about $10 for it.

FRED DE SAM LAZARO: International treaties prohibit the export of obsolete computer hardware from developed to developing countries. But there are loopholes. The stuff is shipped to intermediate points, where shipping labels are changed to hide the real point of origin. Other shipments are disguised as charitable contributions.

RAMAPATI KUMAR: One can import a computer for charity work, so therefore it is coming in the name of charity.

RAMAPATI KUMAR: In this country, environment is an important issue, but it’s not a priority. So livelihood becomes a priority. And basically, you know, takes a lead on all of our other issues, including the toxic waste.

A different way to recycle

FRED DE SAM LAZARO: Ironically, neither the poverty nor the environmental damage associated with recycling are necessary. In the Muslim district of Bangalore, India’s high-tech capital, Syed Hussain runs a business, Ash Recyclers, that’s approved and recognized by the government for safe practices. He says he’s very profitable.

“We didn’t have food to eat before,” he says. “Now, with God’s graces, I’m worth crores,” the Indian equivalent of millionaire status.

SYED HUSSAIN, Ash Recyclers (through translator): When the scientist Sahid came here, we used to be afraid of government regulations. He told us how to do it properly. He said don’t worry. He told us how we can comply with the rules, how we should do this work in a disciplined way.

FRED DE SAM LAZARO: The scientist Sahid he speaks about is Sreenath Shetty. It’s an unlikely partnership of an eccentric, well-to-do Hindu engineer and a Muslim junk dealer.

Shetty helped Hussain develop and use clean recycling technology, but the goal is much more to reuse than recycle. Computers may get obsolete quickly in Bangalore’s I.T. companies, he says, but for most others there is solid demand for used or repaired machines.

So much of what would otherwise become electronic waste has now been carefully stocked in an inventory of spare parts.

TECHNICIAN: See, these are the boards. These are as good as new.

FRED DE SAM LAZARO: Elsewhere in the building, cathode ray tubes laden with toxic components are rebuilt instead of crushed. Many are turned into television sets, sold far more cheaply than new ones to rural customers who could not otherwise afford them.

How long can you recycle a tube like this?

TECHNICIAN: I think two to three times you can definitely recycle that.

FRED DE SAM LAZARO: So this thing can go on beaming television signals until the next two decades?

The need for more Ash Recyclers

SYED HUSSAIN (through translator): Our Koran hasn’t changed in size. It can still be put on a Pentium I, Pentium II or even an old 386 machine. The children can read the Koran. They don’t need an upgrade to learn to read and write.

FRED DE SAM LAZARO: Ash Recyclers conducts its own school for neighborhood recyclers with whom it does business, showing them how to properly dismantle electronic equipment. The only argument anyone has with companies like Ash Recyclers is there aren’t enough of them.

THUPPIL VENKATESH, St. John’s Medical College: We need about 100 Ash to bring everything into order.

I think, in another four or five years, if no action is taken, we will have major contributor for the environmental pollution, and especially lead, from the electronic, e-waste recycling.

FRED DE SAM LAZARO: In recent months, major computer and cell phone manufacturers have pledged to make so-called green machines, more easily recycled and with fewer toxins. But there will still be a lot of old machines coming to Bangalore and other Indian cities. And for people in rich countries who are asked to donate their old computers, Dr. Venkatesh has a plea.

THUPPIL VENKATESH: My sincere request to people from the developed world, like U.S., please do not donate any electronic goods to developing world.

THUPPIL VENKATESH: Please, don’t send. No, no charity. By this kind of charity, you are killing the children. Please don’t do that.

FRED DE SAM LAZARO: As it is, he says, 53 percent of children under 12 in India’s cities are lead-poisoned, meaning permanent brain damage that claims up to 20 percent of a child’s I.Q., the very brainpower that has taken this country into the information technology age.