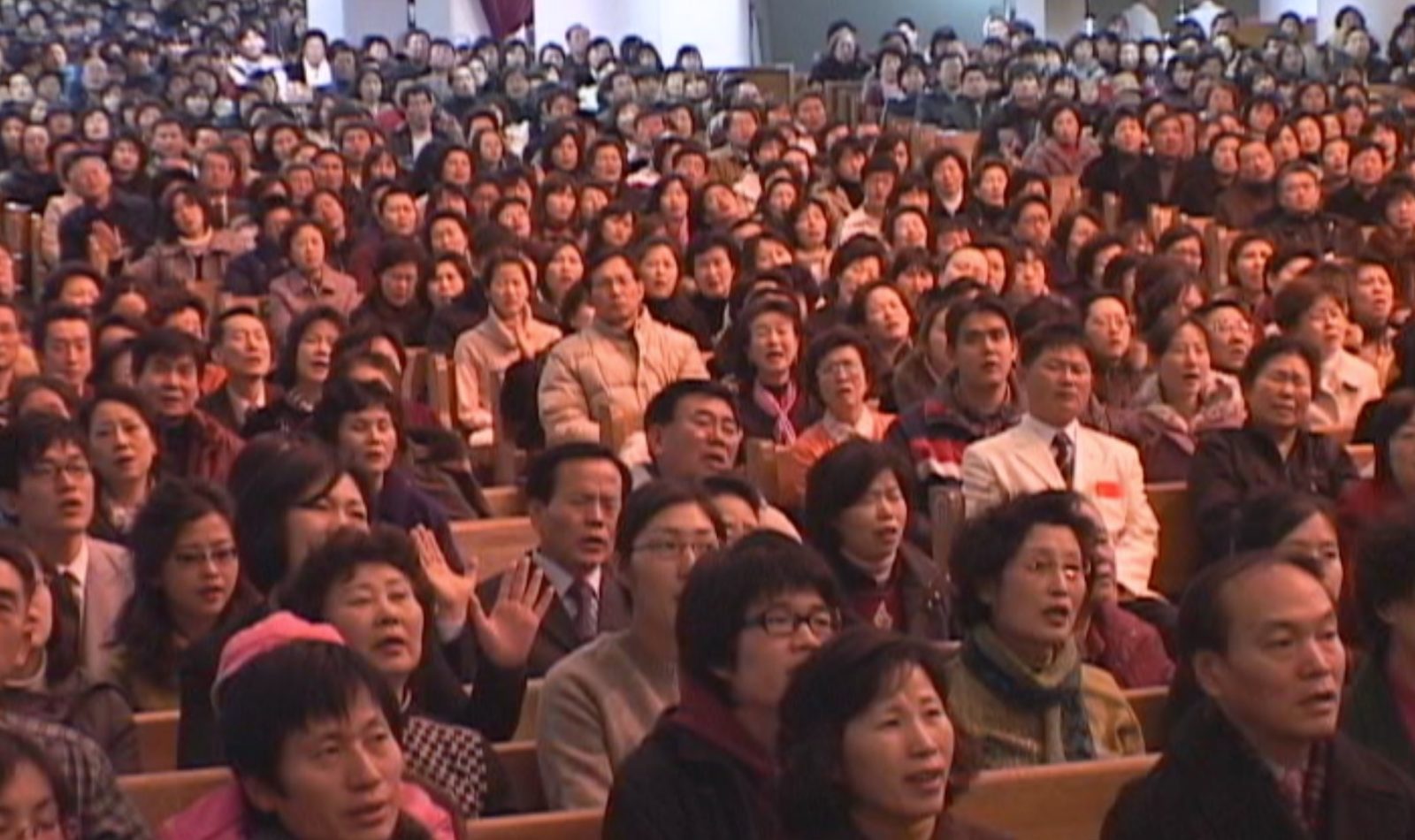 FRED DE SAM LAZARO: Amid the rubber trees and sugar cane fields of rural Thailand lies a missionary outpost of the Global Christian Fellowship. It is home for about two dozen children whose parents, mostly incarcerated or chemically dependent, are unable to care for them. They are led in prayer by Presbyterian minister Jung Woong Kim, who has lived in this mostly Buddhist nation for 30 years.

Reverend JUNG WOONG KIM (Global Christian Fellowship, through translator): I came here to spread the Gospel. But to get into people’s hearts, you have to understand their needs, especially those of young children, the elderly, drug addicts.

DE SAM LAZARO: Reverend Kim and most of his funding come from South Korea, which is now second only to the United States in the number of missionaries it sends to the world.

Reverend SAMUEL KANG (Korean World Mission Association): Sixteen thousand six hundred and sixteen missionaries to 173 countries. By the end of AD 2030, we are going to try to send 100,000 Korean missionaries.

DE SAM LAZARO: To understand the phenomenon of Korean evangelism, he says, you need to go to where it all began. It is 4:30 on a frigid Monday morning in Seoul, but the parking lot is full and the church filled to its 9000-person capacity. In a city that also worships the work ethic, this is how tens of thousands of Koreans begin their work week. At the Onnuri church, it’s a two-hour prayer service. Onnuri calls itself an evangelical Presbyterian church. It began 20 years ago and has seen massive growth.

Reverend YONGJO HA (Onnuri Presbyterian Church, through translator): In our case, we started with 12 families 20 years ago and have grown into a megachurch of 45,000 registered members. It’s not because the senior pastor has some kind of charisma, but this is the power and work of the Holy Spirit. It’s taking place in the heart of metropolitan Seoul.

DE SAM LAZARO: And Onnuri is not the biggest church in the prosperous, bustling South Korean capital. The Yoido Full Gospel Church claims to be the largest single church in the world. Its 800,000 members attend different services across dozens of campuses, all hearing the same message.

UNIDENTIFIED MINISTER (speaking at a sermon, through translator): Everything is possible for [him] who believes.

DE SAM LAZARO: Services are translated into several languages including Chinese, Japanese and English until the crescendo, which leads to most in the congregation speaking in tongues.

Reverend HOON LIM (Yoido Full Gospel Church, through translator): This church emphasizes the gift of tongues. Speaking in tongues and through God’s tongue people can communicate directly with God, and through that activity they can also receive the gift of healing people.

DE SAM LAZARO: He says the Yoido church is adding 10, 000 members every year — this in a country where there were hardly any Christians a century ago. Nowhere, at least in recent history, has Christianity grown so much in such a short period. It may have much to do with Christianity’s place in recent Korean history. Unlike many other countries where Christianity was brought by missionaries. In Korea, the church is not part of a colonial legacy. The colonial power here was Japan, and churches were involved very closely with the Korean independence movement. Although some Catholic influences in East Asia date back to the late 1700s, the first missionaries — American Presbyterians — arrived in the late 1800s.

Rev. HA (through translator): The missionaries 120 years ago came and built schools first. They established junior high, college, medical facilities, and they evangelized the noble families. So when we were still under Japanese, those intelligentsia — they linked that believing in Jesus Christ is equal to working for Korea’s liberation movement.

DE SAM LAZARO: And for a country that’s seen unprecedented growth in wealth and prosperity in the past four decades, it’s not hard to believe in miracles. Korea today is considered a developed country with a standard of living equal to some European Union nations.

Reverend CHONG GIL HONG (North-South Sharing Movement, through translator): Korean economic development is unbelievable. When I was young, Korea’s GDP at the time was the same as Congo, and I could never imagine Korea as an industrialized country.

Rev. HA (through translator): When we were hopeless, the Western missionaries came, and they introduced us to the hope in Jesus Christ, so we have a very holy obligation to share this hope in Jesus Christ with those people who are still in their misery.

DE SAM LAZARO: Nowhere is that misery more visible than above the 38th parallel where the Korean peninsula, liberated from Japanese colonization after World War II, was divided — the theater of a brutal war from 1950 to 1953. Today, the increasingly isolated North suffers frequently from famine and deprivation and things would be much worse but for care packages from the South, spearheaded by the churches.

Rev. HA (speaking during sermon, through translator): Of all the countries, North Korea is the one who uses food as a weapon. They manipulate people with food in order to control them.

DE SAM LAZARO: Despite the North’s nuclear saber rattling, church leaders say they have no option but to continue with their humanitarian cause and the long-term goal of reunifying their divided nation.

Rev. HA (through translator): To us they are our families. We are all the same nationality. We have to embrace them like a mother would embrace a prodigal son.

DE SAM LAZARO: For some churches resettling defectors from the North is central to their mission. The Durihana Mission Church is part of an underground network to assist defectors.

Reverend CHUN KI WON (Durihana Church during sermon, through translator): Let us pray for the six people who have left North Korea today for freedom.

DE SAM LAZARO: Several in this prayer group in Seoul are recent arrivals. We were asked not to show their faces to protect family still in North Korea. These women linked up with the Durihana church after escaping first to China.

UNIDENTIFIED WOMAN #1 (through translator): The woman who helped me escape had heard of Pastor Chun. We found the Web site and made a request for help.

DE SAM LAZARO: Durihana has operatives in China, Mongolia and several southeast Asian countries. We were asked not to mention this one for fear of antagonizing the host government. That’s already happened in China, where Durihana’s pastor, Chun Ki Won, spent eight months in prison. China strongly opposes aid to North Korean defectors.

Rev. WON (through translator): They are leaving for China in search of food, but the Chinese government sees them as criminals. So China sends those defectors back, and as a result these people are sometimes executed, imprisoned.

DE SAM LAZARO: Some analysts worry that activities like Durihana’s are encouraging defections and complicating the politics in what remains one of the world’s most militarized places.

Professor JEONG MIN SUH (Yonsei University, through translator): The South Korean government is very sensitive about annoying the North Korean government. And it is also worrying about possible conflict with neighboring countries, including China, on the diplomatic front. The general mentality among the public and Christians is as long as such activities don’t go overboard, it’s okay. However, there are cases like some so-called relief teams who secretly enter the North and bring North Korean residents to China or other Asian countries purposely or in a premeditated way that is not acceptable.

Rev. WON (through translator): The name Durihana comes from the Bible. It means two become one.

DE SAM LAZARO: When that day comes to the Korean peninsula, Durihana can count on an army of North Korean apostles.

UNIDENTIFIED WOMAN #2 (through translator): When the two Koreas become unified, I also want to go back to my hometown. I want to do some church missionary things for my own village.

DE SAM LAZARO: About 10,000 North Koreans have now resettled in the South — some 600 with the assistance of this church alone: missionaries Durihana hopes one day to dispatch not to distant countries but to the land of their birth.

The largest church in the world

The Yoido Full Gospel Church in South Korea claims to be the largest church in the world, and the country is second only to the U.S. in its number of missionaries. NewsHour reports on the spreading evangelical movement in the country.