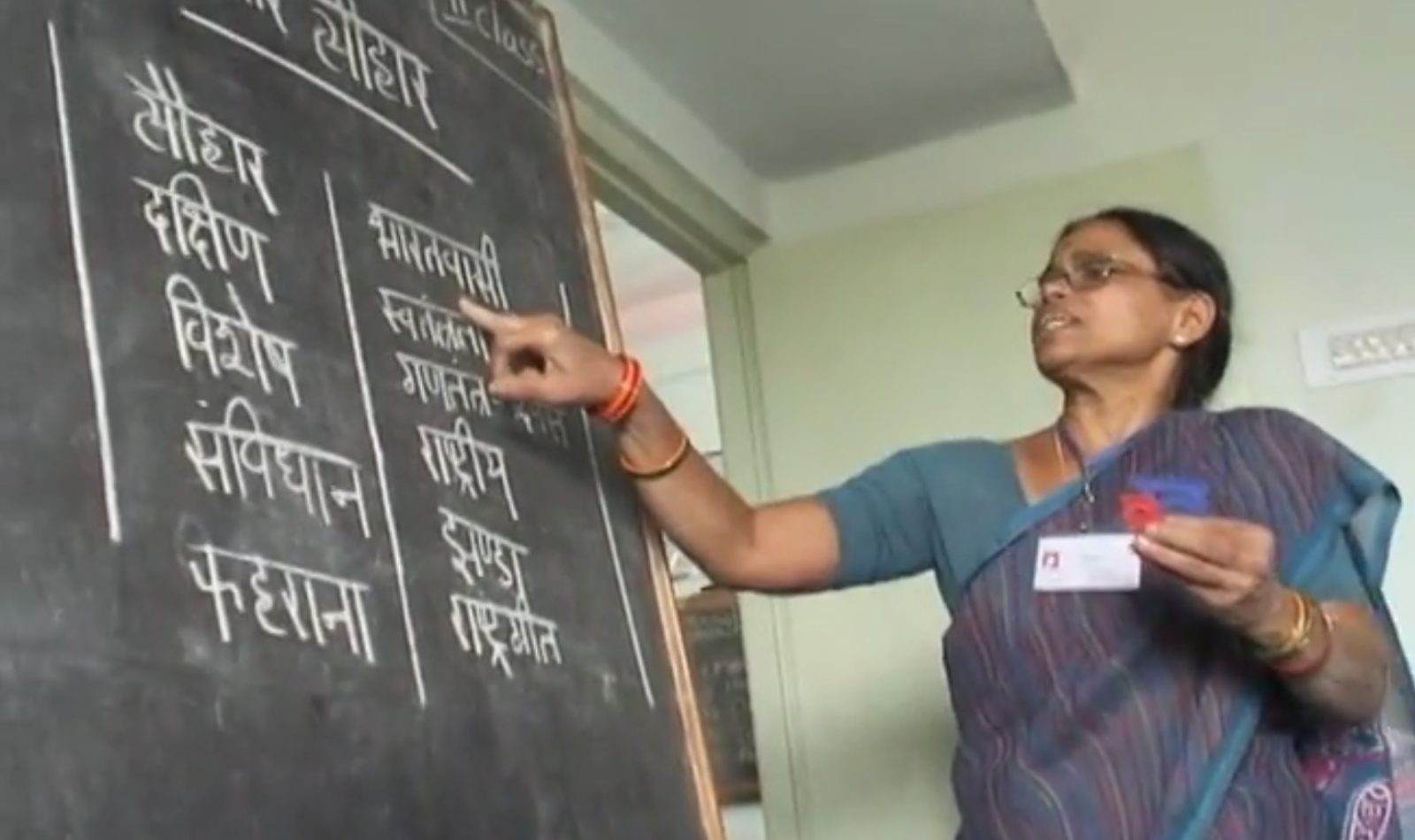 FRED DE SAM LAZARO: She’s stands barely taller than these children, but to them Dr. Sunitha Krishnan is a towering figure, big sister, mother, and school principal rolled into one.

Their faces betray few outward signs of the trauma these children have endured. Every child at this boarding school Krishnan founded is a victim of rape or incest. All are HIV-positive as a result of their assaults.

FRED DE SAM LAZARO: But beneath her smile lies a deep anger that propels Krishnan, anger at what she sees as public indifference about sexual violence inflicted on children and young women, anger that took root when, as a teenaged social activist, she was gang-raped.

DR. SUNITHA KRISHNAN: I think the rape, per se, was not so much of an issue for me. I don’t know. For some reason, I was never traumatized by that, the fact that I was raped.

FRED DE SAM LAZARO: About half these children came from the commercial sex districts. It’s only one part of an organization Krishnan started called Prajwala, which means eternal flame. It’s dedicated to removing, she says rescuing, women from prostitution, which she calls the most pervasive form of sexual violence.

It begins with helping their children so they don’t follow in their mother’s footsteps. In 1995, she started a school with five kids. Today, Prajwala runs 17 schools with 5,000 children across the city of Hyderabad.

DR. SUNITHA KRISHNAN: If this facility was not here today, perhaps most of the girl children would be inducted into prostitution.

FRED DE SAM LAZARO: Even at this stage?

DR. SUNITHA KRISHNAN: I would say eight or nine. The older children that you saw on the other floor are children who would have been easily procured for prostitution and most of the boys, right from the age of six or seven, perhaps would be pimping for their mothers.

FRED DE SAM LAZARO: She says about two million people are trafficked every year within India or from neighboring countries. Most are inducted into the sex trade in big cities and tourist areas.

Prajwala has developed a network of informants in the sex industry to help conduct brothel raids, captured here in the group’s own hidden camera footage. Most of the young women rescued are already veterans of the trade. Many are actually very reluctant to leave.

We asked the police, ‘Why are you hitting us?’ they said, ‘Because you do this immoral work.’ And I said, ‘Well, why are you catching us? You should go after our house madams, not us.’ But they just beat us some more.

Peer counselors help the cause

FRED DE SAM LAZARO: Many do go back to the life they know, but Prajwala has managed to coax about 1,500 women out of prostitution. Peer counselors, like 20-year-old Malini, play a critical role.

MALINI, Peer Counselor (through translator): When we get the girls, they cry a lot. I ask why, and I tell them my own story, that this is what happened to me and I don’t want the same to happen to you.

FRED DE SAM LAZARO: Malini’s story is typical. There was abuse, poverty and despair in her home. A seemingly helpful adult friend offered her work in the big city. Instead, she was sold to a brothel.

The price the brothel paid for her then became the amount she’d have to earn to buy her freedom. The accounting was elastic and entirely dictated by pimps or madams, as she found out months into her servitude.

FRED DE SAM LAZARO: But running to the police in a city she didn’t know, she encountered only more violence.

MALINI (through translator): When we asked the police, “Why are you hitting us?” they said, “Because you do this immoral work.” And I said, “Well, why are you catching us? You should go after our house madams, not us.” But they just beat us some more.

One needs to ask questions in America, also, about why American people want small children to have sex with and that, if they don’t get it in their own countries, they seek it out in countries like Sri Lanka and India and Philippines.

Activists get assistance with raids

FRED DE SAM LAZARO: Official corruption has decreased in recent years, and Prajwala’s rescue raids are now conducted with the police. At least part of this change is driven by the United States.

The U.S. Justice Department publishes an annual TIP, or Trafficking in Persons report. Countries that show no improvement in cracking down run the risk of some trade sanctions.

DR. SUNITHA KRISHNAN: At one level, it irritates me to no end that my country would require somebody else from outside to tell them that this is a problem. That’s not the right way to go about it.

FRED DE SAM LAZARO: At the same time, she’s not shy in telling the U.S. and others what to do. Twenty-five percent of sex tourists in Asia are American, she says.

DR. SUNITHA KRISHNAN: So one needs to ask questions in America, also, about why American people want small children to have sex with and that, if they don’t get it in their own countries, they seek it out in countries like Sri Lanka and India and Philippines. You’re about imposing sanctions on India, but have you ever thought about imposing sanctions on your own country?

FRED DE SAM LAZARO: Krishnan says Washington has laws against sexual predators, even those who offend abroad, but doesn’t enforce them enough. In India, her advocacy has led to stronger laws to counter trafficking and protect victims.

For those who are rescued by Prajwala, the first stop is this transition shelter.

PRAJWALA WORKER (through translator): You’re not old yet, and at your age girls should remember a few important things: the way you dress, your behavior. How should that be? It should be acceptable to others. For example, the way you walk.

FRED DE SAM LAZARO: It will take months, with lectures and skits, to unlearn the behavior and demeanor they’ve acquired over the years.

DR. SUNITHA KRISHNAN: Hey girl, where are you going? Come here. How much do you want?

First, tell me why did all of this happen?

GIRL (through translator): If a girl’s good looking, people will make comments like that.

DR. SUNITHA KRISHNAN (through translator): Do you think this happens to any woman?

GIRL (through translator): No. It’s because of the way we’re dressed. That’s why they’re saying that.

I want to get married to a very kindhearted man, and definitely I want an HIV-positive man, because I don’t want to ruin somebody’s life. He should be caring. If he is sick, I will take care of him. If I’m sick, he’ll take care of me.

FRED DE SAM LAZARO: Young women, like 19-year-old Abbas Bee, are trained in traditional life skills and quite untraditional occupational ones. The goal is to find good-paying jobs, jobs rarely held by women.

Prajwala employs many of the women in printing and metal workshops it has started, enterprises that help pay for its work, along with grants from UNICEF, Catholic Relief Services, and others.

DR. SUNITHA KRISHNAN: We have trained young girls as welders, as carpenters, as printers, as bookbinders, as screen printers, as taxi drivers and auto drivers. We also train them as housekeepers to work in hotels and hospitals and things like that.

FRED DE SAM LAZARO: Their earnings make women like Abbas more eligible as brides, even though she, like perhaps 25 percent of women here, is HIV-positive.

ABBAS BEE (through translator): I want to get married to a very kindhearted man, and definitely I want an HIV-positive man, because I don’t want to ruin somebody’s life. He should be caring. If he is sick, I will take care of him. If I’m sick, he’ll take care of me.

FRED DE SAM LAZARO: If she does get married, her wedding, like many others, will happen at Prajwala.

DR. SUNITHA KRISHNAN: At any given point of time, there is somebody pregnant, somebody delivering or somebody — something’s happening. So from birth to death, birth to death, we are the only linkage.

FRED DE SAM LAZARO: It’s a daunting parental responsibility for the 34-year-old Krishnan, but not the only hazard in a job that’s taking on a lucrative organized prostitution industry. At last count, she’s been beaten up 14 times since starting her organization.

An organization in India is fighting forced prostitution by counseling and training women in other forms of work and helping their children so they don’t follow in their mothers’ footsteps. Fred de Sam Lazaro of Twin Cities Public Television provides a report.