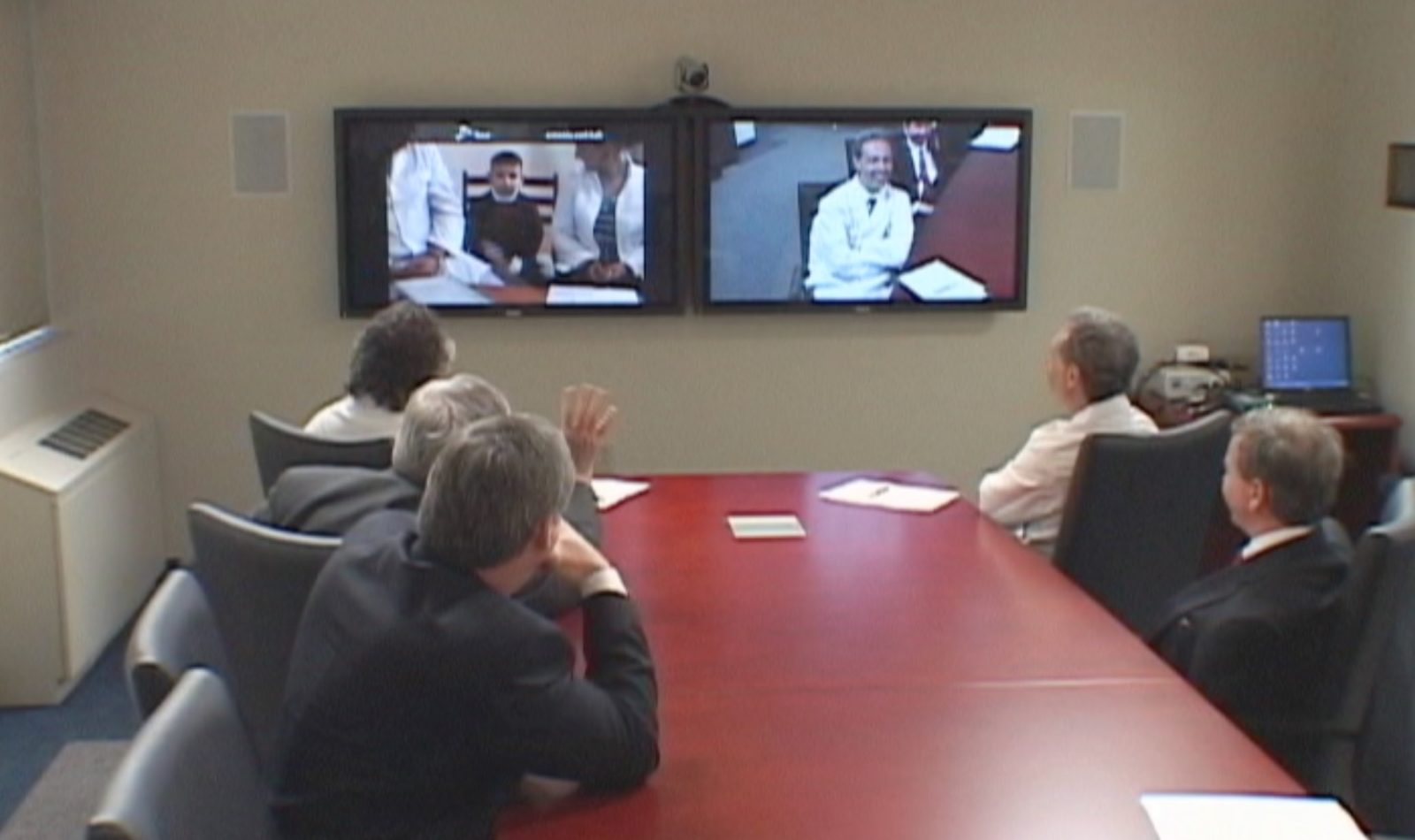 FRED DE SAM LAZARO, NewsHour Correspondent: Many leading American hospitals treat rich patients from overseas, but the overseas patients doctors see at St. Joseph’s in Paterson, New Jersey, are not rich. And they are, in fact, overseas.

On this day, Dr. Michael Lamacchia and colleagues were looking by video hookup at a 6-year-old boy in Yerevan, capital of the former Soviet republic of Armenia. Doctors there were worried about Ardan’s chronic chest infections and his slowed growth.

DR. MICHAEL LAMACCHIA, Pediatrician: How does he plot out on our growth curve?

VIDEO CONFERENCE DOCTOR: His weight and height is below the third percentage.

DR. MICHAEL LAMACCHIA: Well, that number certainly would place him in the category of someone that you what have to evaluate for immune disorders, so I think you’re right on the right track with that.

FRED DE SAM LAZARO: The inspiration and financial backer for these video clinics often sits in. Frank Brady is not a doctor, but a kind of telemedicine midwife, through a charity he founded called Medical Missions for Children.

FRANK BRADY, Medical Missions for Children: With the telemedicine today, we’re able to help children in over 100 countries, and we’ve actually donated equipment to hospitals, multiple hospitals in those countries.

How the charity began

FRED DE SAM LAZARO: Brady is a lifelong gadget geek. When he took an early retirement in 1999, he says he wanted to bring cutting-edge medical care to sick children in developing countries, many of which he’d visited as an executive for GE. Frank Brady himself was once on medicine’s cutting edge, as a very ill infant to young parents.

FRANK BRADY: I had spinal meningitis, and they didn’t expect me to last another two or three weeks. And one of the doctors happened to mention that there was some kind of an experimental drug that was being tried on adults, and how would they feel about having it tried on a child?

Well, they felt they had no choice, and they went ahead and did it. And, lo and behold, the drug turned out to be penicillin. And as you can see, it worked. And my mother always used to say to me that “God spared you because you’re supposed to do something very, very special.”

FRED DE SAM LAZARO: It would be five decades before he accomplished that special thing. With his wife, Peg, Brady used $85,000 of their retirement money to buy video equipment made by a company called Polycom. Then they had a stroke of luck.

FRANK BRADY: Lo and behold, what happens is we end up winning a contest with Polycom for the most unique use of a piece of Polycom equipment. And that started the relationship where they started giving us or donating to us the equipment.

Reaching children around the globe

FRED DE SAM LAZARO: Eight years after it began, Medical Missions has helped about 25,000 children, from video clinics located in 27 top U.S. and European hospitals. Peg and Frank Brady say, for them, it’s all about the kids.

PEG BRADY, Medical Missions for Children: I have a little boy in Brazil. Gosh, he’s just going into puberty now, and he has this huge tumor on his back. And they operated and operated, and it keeps growing back, and it’s non-cancerous, and they don’t know what to do with it. And they’re afraid that, once his hormones start growing, that it’ll just strangle his whole body, and he won’t be able to walk, he won’t be able to breathe, you know, it will just take over his body.

FRED DE SAM LAZARO: But thanks to the Bradys, he does have the attention of some of the world’s top specialists.

DOCTOR: For us, it’s considered a screening, but not a definitive one.

FRED DE SAM LAZARO: Many doctors who volunteer are immigrants, happy to help patients in their native countries. Others, like pediatrician Lamacchia, say the consultations not only benefit patients but also give U.S. doctors valuable experience.

DR. MICHAEL LAMACCHIA: You gain insight by practice and experience. And, certainly, doing these consultations has also been beneficial from our point of view to gain insight on progression of disease and things that we may not as commonly see.

FRED DE SAM LAZARO: Brady found that about 30 percent of children in his clinics are misdiagnosed by their doctors. And he says the figure in the United States, though better, is still troubling: About 15 percent of patients are misdiagnosed. So he decided to expand, to use new communications technology to help doctors stay on top of developments in their field.

DOCTOR: They ability to do rapid sequencing…

FRED DE SAM LAZARO: He started the Medical Broadcasting Channel, which gathers recordings from top facilities and medical conferences, and puts them at doctors’ fingertips. The channel is distributed worldwide by cable, satellite and on the Internet.

FRANK BRADY: That global video library of medicine, which today has about 25,000 hours of medical symposia, is used to feed our satellite network, our Internet2 network, which today goes to about 300,000 different institutions around the world

DR. ELIAS ZERHOUNI, Director, National Institutes of Health: Over time, we realized that what was needed was reliable information, medical information related to scientific progress and science of medicine today. And I thought we should really work with Frank and see if this could be a good way of increasing health literacy around not only our country, but the world.

FRED DE SAM LAZARO: Frank Brady says he works twice as hard as he did before he retired, and he doesn’t take a salary. Still, he has no immediate plans to slow down. All the new advances in medicine, he says, will help the retiring baby boom generation redefine retirement.

FRANK BRADY: First of all, through the advancement in medicine — I mean, just the advancement in the area of cardiology — people are a lot healthier later on in their years. And what do you do with the time that you have left? You know, how much golf can you play? How many trips can you take? And, you know, what do you want your legacy to be?