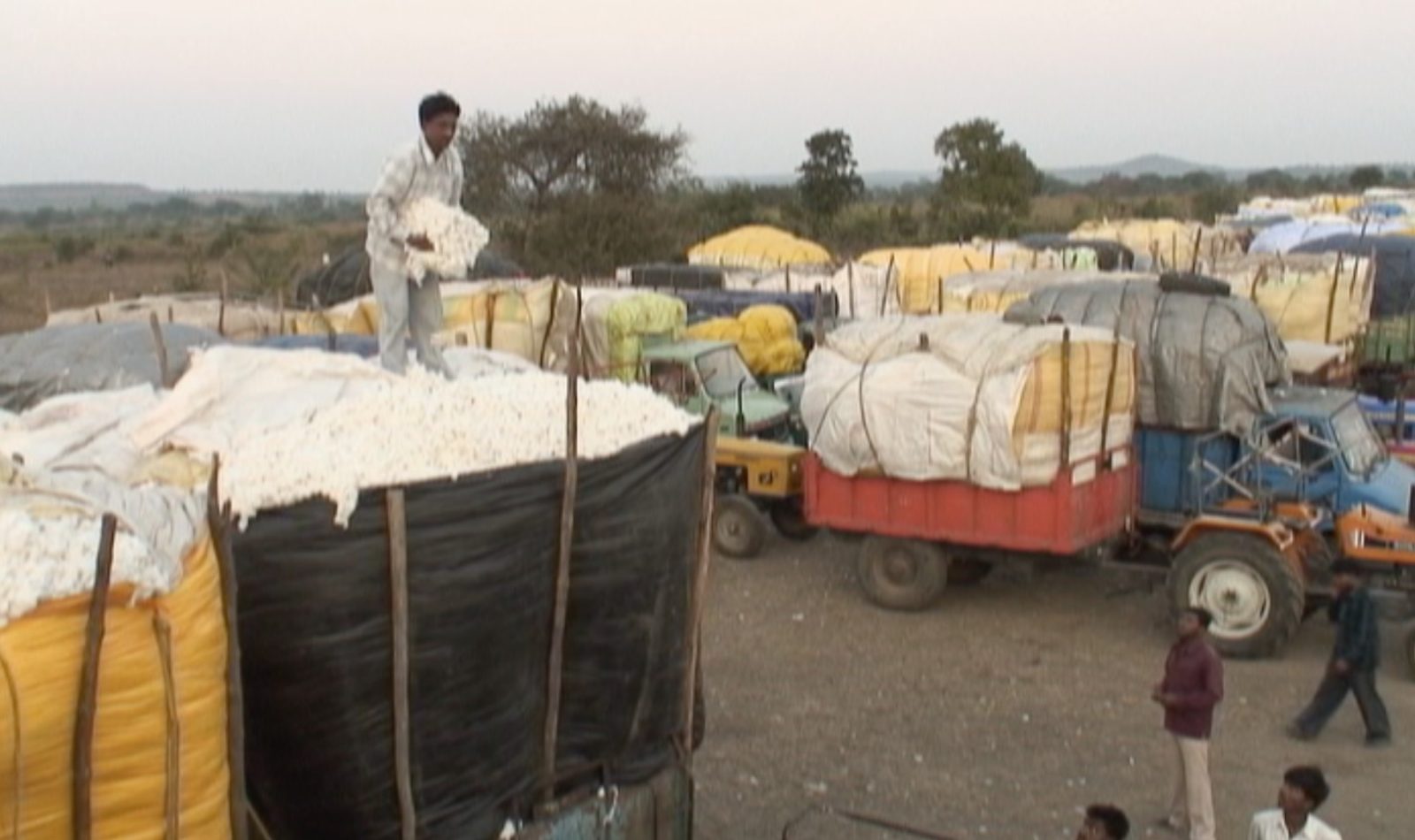 Farming in India has become difficult and costly, leading to thousands of farmers taking their own lives.
Play Story
Subscribe to Stories

FRED DE SAM LAZARO, NewsHour Correspondent: It should be a joyful time when the harvest comes in, but in the cotton-growing region of Vidarbha, there’s not much to cheer.

VITTAL SHINDE, Farmer (through translator): It’s been two days now. I’ve been eating in the restaurant nearby, and I’ve been buying straw for the bulls and sleeping here on the cart. It’s of no use because we are not getting good prices.

FRED DE SAM LAZARO: At the market where traders and growers haggle over quality and price, farmers like Vittal Shinde hang on in vain hope of better offers.

FRED DE SAM LAZARO: Two thousand rupees is about $45 U.S. dollars for every 200 pounds of cotton, about a third less than his break-even point. But others are even worse off: Many farmers, like Thulsiram Mandre, have little to take to market.

THULSIRAM MANDRE, Farmer (through translator): See this flour? Normally it’s at least double this size. The seedling is dying; so many seeds are stunted.

FRED DE SAM LAZARO: And an alarming number of others have lost harvest and all hope.

The day we arrived at her small home, neighbors gathered with Krisnabhai Tekham, the quiet interrupted by the sobs of mourners. A day earlier, Krisnabhai had buried her husband, Dalap, who committed suicide.

KRISNABHAI TEKHAM (through translator): He came home from the field, and he collapsed. His mouth was smelling of pesticide, so we put him on a cart and took him to the hospital in town, but he died on the way.

INDIAN FARMER (through translator): The crop has just dried up. We have so much debt, my son-in-law couldn’t pay it. I have no idea how we can deal with it now.

FRED DE SAM LAZARO: In an unmarked grave some two miles from where he lived, Dalap Tekham was laid to rest. He added one to a grim tally. Here in the Vidarbha region of central India, some 1,300 cotton farmers took their own lives in 2006. That works out to a suicide rate of one every eight hours.

To find out what’s driving so many farmers over the edge, we talked to Thulsiram Mandre, who says he is close to that edge.

THULSIRAM MANDRE (through translator): At the most from cotton, I may make 60,000 rupees this year. That’s not enough to pay for fertilizer, for family expenses, then loan payments. There’s nothing left. I didn’t pay back one penny to the bank last year.

FRED DE SAM LAZARO: Indian’s cotton farmers have been vaulted into a globalized trading system, and they’re at the mercy of two unpredictable monsters: the monsoon and the market, says Sudhir Goel. He’s the chief central government official in the region.

FRED DE SAM LAZARO: The government has responded by making more loans available, but Goel admits this merely keeps the local cotton economy going and may keep some predatory private moneylenders at bay. It doesn’t address the low cotton prices in the market. For that, he blames subsidies the E.U., and especially the U.S., give to their farmers.

FRED DE SAM LAZARO: The government here used to guarantee Indian farmers minimum prices, but it has backed away from such subsidies under new market-oriented economic policies. Besides monsoons and markets, farmers face another problem: Monsanto, according to Vandana Shiva. She’s a nuclear scientist who became an anti-globalization activist 20 years ago.

VANDANA SHIVA, Activist: Every seed that is in the market in cotton today is linked to one company or the other, licensed and controlled by Monsanto.

All the gods and divinities of this amazingly diverse country have been mobilized to sell toxic seed and non-renewable seed, and farmers have been seduced by it.

FRED DE SAM LAZARO: She says peasant farmers used to use natural fertilizers and pesticides, and they grew and saved their own seeds to plant the next year’s crop. In the ’70s, coaxed by the government and international aid donors, farmers began to use hybrid seeds bought in the store. These offered the promise of better yields and disease resistance, but they can require careful management, including chemical fertilizer and pesticides.

More recently, genetically modified BT cotton seeds were introduced by St. Louis-based Monsanto, licensed and sold under the names of well-known Indian seed companies. BT seeds are patented, so farmers aren’t allowed to grow and replant them. They must be bought every year from the seed companies, which market them with film stars and even Hindu deities, says Vandana Shiva.

VANDANA SHIVA: All the gods and divinities of this amazingly diverse country have been mobilized to sell toxic seed and non-renewable seed, and farmers have been seduced by it.

FRED DE SAM LAZARO: Thulsiram Mandre at first wasn’t going to plant BT seeds on his 10-acre farm, but he says an ad changed his mind.

THULSIRAM MANDRE (through translator): The famous lecturer, what’s his name now? Nianana Pataka was on the TV ads there saying this year was going to be disease-free. Last year, there was a disease called red leaf, which ruined all the crop. So I decided I’d plant it on just three acres to be on the safe side.

THULSIRAM MANDRE (through translator): They keep saying this is red disease, red disease. I really don’t know why this is happening.

FRED DE SAM LAZARO: Mandre is learning that his new crop is not as disease-resistant as the ad said. His is the classic saga in which many illiterate farmers eventually lose their land, says Vandana Shiva.

VANDANA SHIVA: That innocent farmer is grabbed by the agent, who says, “Here’s a miracle seed that’s going to double your income. You’re going to be a millionaire. Put your thumb print out here.” The farmer has no idea what he’s signing onto. The farmer has no idea that, two weeks down the line, he’ll have to come back for pesticide. But then the leaves will start shriveling up, the agent will say, “No, no, you also needed irrigation. We didn’t tell that to you in the beginning, so take a tube well loan, and here’s another loan.”

Government is not helping these people at all. It’s just some peanuts, so meager that you can’t even call it help. People have lost all confidence in the leaders.

FRED DE SAM LAZARO: The Monsanto company declined our requests for an interview. It did issue a statement that, in part, reads, “While some may suggest that BT cotton is to blame, the fact is that there are multiple social, economic and environmental factors that make agriculture challenging in India.”

The company’s Web site features several scientists who support the use of biotechnology in developing nations.

FRED DE SAM LAZARO: For his part, the government’s Sudhir Goel agrees some farmers are doing well with BT.

FRED DE SAM LAZARO: The problem is fewer than 10 percent of farmers in Vidarbha have irrigated fields that can provide the regular watering that BT, more than ordinary cotton, requires for optimal results. Most farmers here still rely on rainfall; too much, too little, too early, too late and a BT crop can wither.

So what does Goel make of the ads for seeds that may not be suitable to the terrain here?

You say you cannot control advertising. Surely, if it is false and misleading, you can.

SUDHIR GOEL: It is not false. In fact, in their advertising campaign and also in the packets which they are selling, it is mentioned that the best results are with irrigated farming.

If the government does not forgive our loans, and if we cannot get 2,700 rupees per hundredweight for cotton, then already we are starving. I know I will have to commit suicide sooner or later.

FRED DE SAM LAZARO: He says the government is committed to increasing the acreage under irrigation in this region, but that inspires little confidence on the ground, says farm activist Kishore Tiwari.

KISHORE TIWARI, Farm Activist (through translator): Government is not helping these people at all. It’s just some peanuts, so meager that you can’t even call it help. People have lost all confidence in the leaders.

FRED DE SAM LAZARO: Tiwari’s organization tallies and posts pictures of the grim suicide toll in Vidarbha. He says the government priority has been the new urban, high-tech-based economy. In rural areas, where 70 percent of Indians live, he says little is spent on infrastructure and corrupt officials don’t protect farmers from illegal moneylenders.

KISHORE TIWARI (through translator): If a country wants to develop properly, you can’t ignore one part of the society and make it so weak. That keeps the whole society from prospering.

FRED DE SAM LAZARO: Aside from crop loans, the government has given farmers, like Thulsiram Mandre, pesticide, spray equipment, and a water pump. He’s used neither.

FRED DE SAM LAZARO: Even in farmer relief programs, he says, everyone seems to benefit except the farmer.

THULSIRAM MANDRE (through translator): If the government does not forgive our loans, and if we cannot get 2,700 rupees per hundredweight for cotton, then already we are starving. I know I will have to commit suicide sooner or later. If you think about everything, the loan I won’t be able to repay, the family who will suffer if I commit suicide, if you think of both the options, the suicide option is less troublesome.

FRED DE SAM LAZARO: Both the state and central governments have lent hundreds of millions of dollars to farmers, and there’s no indication from either of any move to forgive the loans of Thulsiram Mandre and tens of thousands of distressed cotton farmers.

Farming in India has become difficult and costly, leading to thousands of farmers taking their own lives. The NewsHour reports on why the industry has become so challenging and what farmers are doing to get through this tough period.