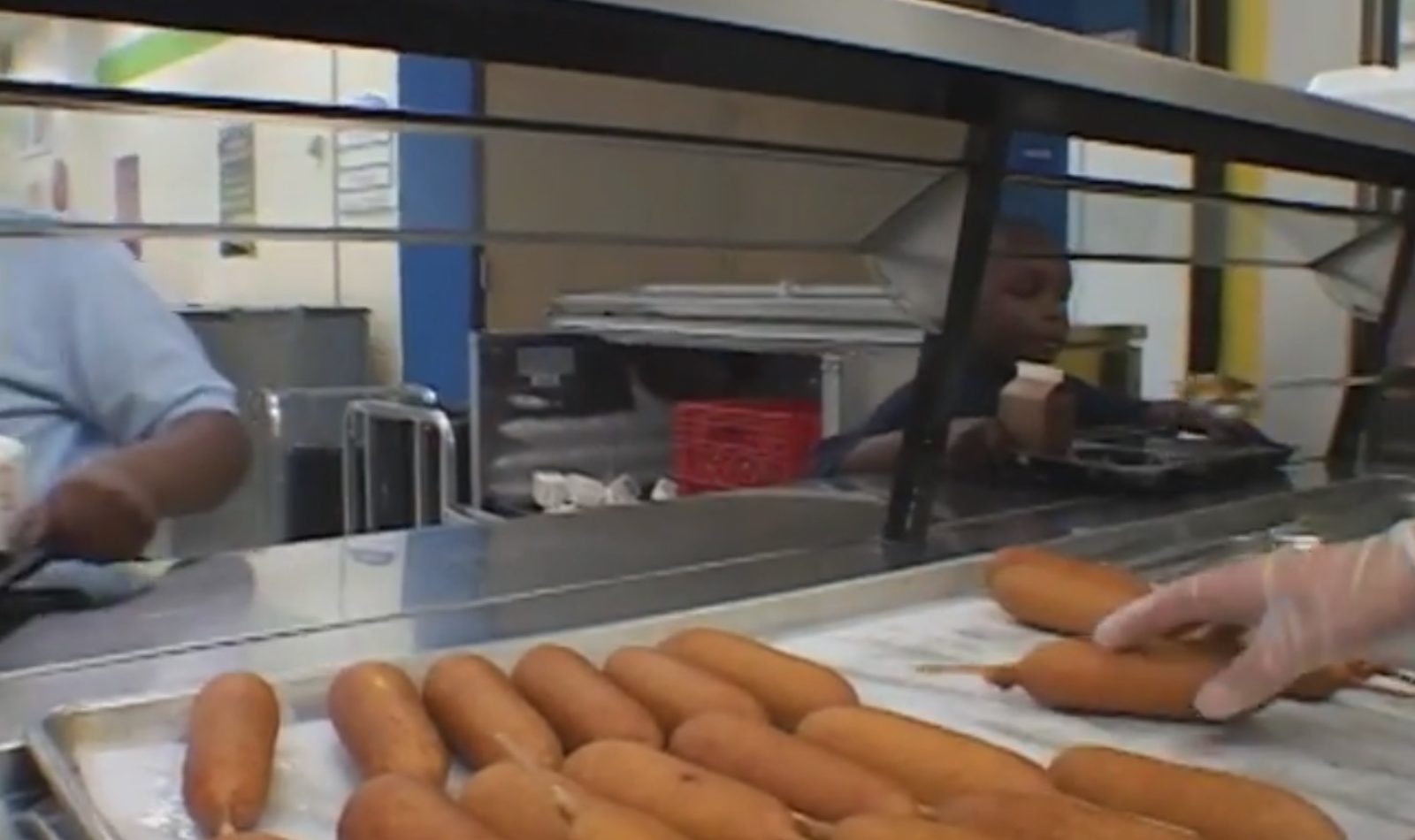 How some schools are making efforts to provide meals that are both tasty and health conscious.
Play Story
Subscribe to Stories

FRED DE SAM LAZARO, NewsHour Correspondent: Long before the kids come to school in St. Paul, the staff at the district’s main kitchen have been hard at it. Their daunting task: 40,000 lunches, headed to 98 different lunchrooms.

But in the off times, a celebrity chef has been volunteering his time to help make the food coming out of here healthier and tastier.

SETH DAUGHERTY, Chef: … one tablespoon of mint puree, because when you’re doing…

FRED DE SAM LAZARO: A 42-year-old father of two school-aged children, Seth Daugherty has been revamping recipes. Some, he says, have been simply awful.

FRED DE SAM LAZARO: Daugherty has been on the cover of Food and Wine, one of the best new chefs in 2005, and now teaches at a culinary school. He wants to give kids what he calls “real food.”

SETH DAUGHERTY: And I really want these kids to be the ones that will break the cycle of processed foods and bring that culture of cooking back into our society, where one-third of all meals are eaten in cars, which is scary.

FRED DE SAM LAZARO: Many of the rest are eaten in school.

The University of Minnesota’s Mary Story says just 2 percent of young Americans eat according to the USDA guidelines for good health.

FRED DE SAM LAZARO: In the past, public health advocates saw school lunch as the answer to poor nutrition. Congress created the lunch program in 1946 in response to widespread malnutrition among military draftees during World War II.

Today, some 30 million children receive school lunches. The schools charge about $1.25 per meal. But about 60 percent of the children, those from low-income households, get them free or at reduced price, subsidized by the U.S. Department of Agriculture.

Lunches must meet federal nutrition guidelines, and districts are now required to have overall wellness programs. But Story says schools have not managed to promote good eating.

MARY STORY: The Army released a report last year that a third — 32 percent of 18-year-olds in this country that were applying to any branch of the military were overweight. This is really a social responsibility issue, I mean, where everyone really has to take their part. It’s not a matter of just saying, “People, they can choose what they want.” It’s not working now.

FRED DE SAM LAZARO: The Robert Wood Johnson Foundation, a NewsHour funder, and the Centers for Disease Control recently searched for school districts to study as models for good nutrition and wellness programs. St. Paul was among just six they chose.

St. Paul has taken several steps to improve what students eat and drink in its schools. For example, no more candy rewards; no more candy sales for fundraisers. And what about birthdays, Valentine’s Day, Halloween? For those kinds of events, treats are allowed once a month in a class. And vending machines now can carry only water, small containers of juice, and milk.

But our visit to St. Paul Central High showed how daunting the challenge can be. Some kids brought in soda and chips. Some used the newly introduced salad and sandwich bar, but most instead stood in long lines for cheeseburgers. At least there’s no super-sizing, says food service director Jean Ronnei.

JEAN RONNEI, St. Paul Public Schools: A half-cup serving of McDonald’s fries is not necessarily a bad choice. When you get into super-sized, it certainly is. For us, a half-cup portion is all that’s ever available to our students.

FRED DE SAM LAZARO: Back in the kitchen, Chef Daugherty is launching a full frontal assault on another deep-fried potato staple.

SETH DAUGHERTY: Tater tots. You’ll see tater tots in every school district in every school in all of America. Today, we took just fresh potatoes and roasted them in a little rosemary garlic, a little olive oil, salt and pepper, so simple, but so good.

Look at those, potatoes are looking good.

JEAN RONNEI: Oh, boy, they’re looking fabulous. Little hot. Bellissimo! I think they’re a little on the dry side, though.

SETH DAUGHERTY: A little on the dry side?

JEAN RONNEI: Maybe a little bit over-baked. Why don’t you guys try them and see. I think the flavor is really good. It’s nice and garlicky.

SETH DAUGHERTY: See, I like the way they’re cooked.

SETH DAUGHERTY: Yeah, I like them like that, because I want them to have a little hard shell.

JEAN RONNEI: I have been outvoted.

FRED DE SAM LAZARO: The key votes, of course, will come from her customers. The baked rosemary potatoes got their critical first test at St. Paul’s Galtier Elementary School.

TEACHER: Did you put ketchup on them? No? No ketchup? How was it?

TEACHER: Good? Are they spicy?

FRED DE SAM LAZARO: There was one question she didn’t ask, so we did.

SETH DAUGHERTY: You know, I look at my own kids, age 7 and 11, and they eat everything. Did they eat it all the first time? Well, of course not. You know, I mean, it takes about 30 times for a child to really, after tasting it, to think, “Wow, maybe that’s OK.”

But, you know, after those 30 times, they might decide that they don’t like it. And that’s OK. Not everyone likes everything. And so it’s just continuing to put different products in front of them that are real food.

FRED DE SAM LAZARO: At Galtier Elementary, where 80 percent of the kids receive free or reduced-priced meals, Principal John Garcia takes the message of good food to their classrooms and, he hopes, their homes.

JOHN GARCIA, School Principal: My nurse and I have been teaching a nutrition course in fourth grade. We work on the food pyramid. We look at nutritional choices again. And it has gone home. And the parents have said, “You know, we’ve changed the way we shop at home. We actually read the labels on the back of packaging now. We have more fruits and vegetables in our home than we ever have.”

FRED DE SAM LAZARO: In fact, these fifth-graders who have gone through the school’s nutrition classes seemed more accepting.

Converting taste buds is one of two challenges; the other is finding the money. Rosemary potatoes cost about 20 cents per serving. That’s twice the price of tater tots and a fifth of the entire amount budgeted for a St. Paul school lunch.

While American schools celebrate National School Lunch week, many are making efforts to provide meals that are both tasty and health conscious. The NewsHour reports on such efforts in St. Paul, Minn., schools.