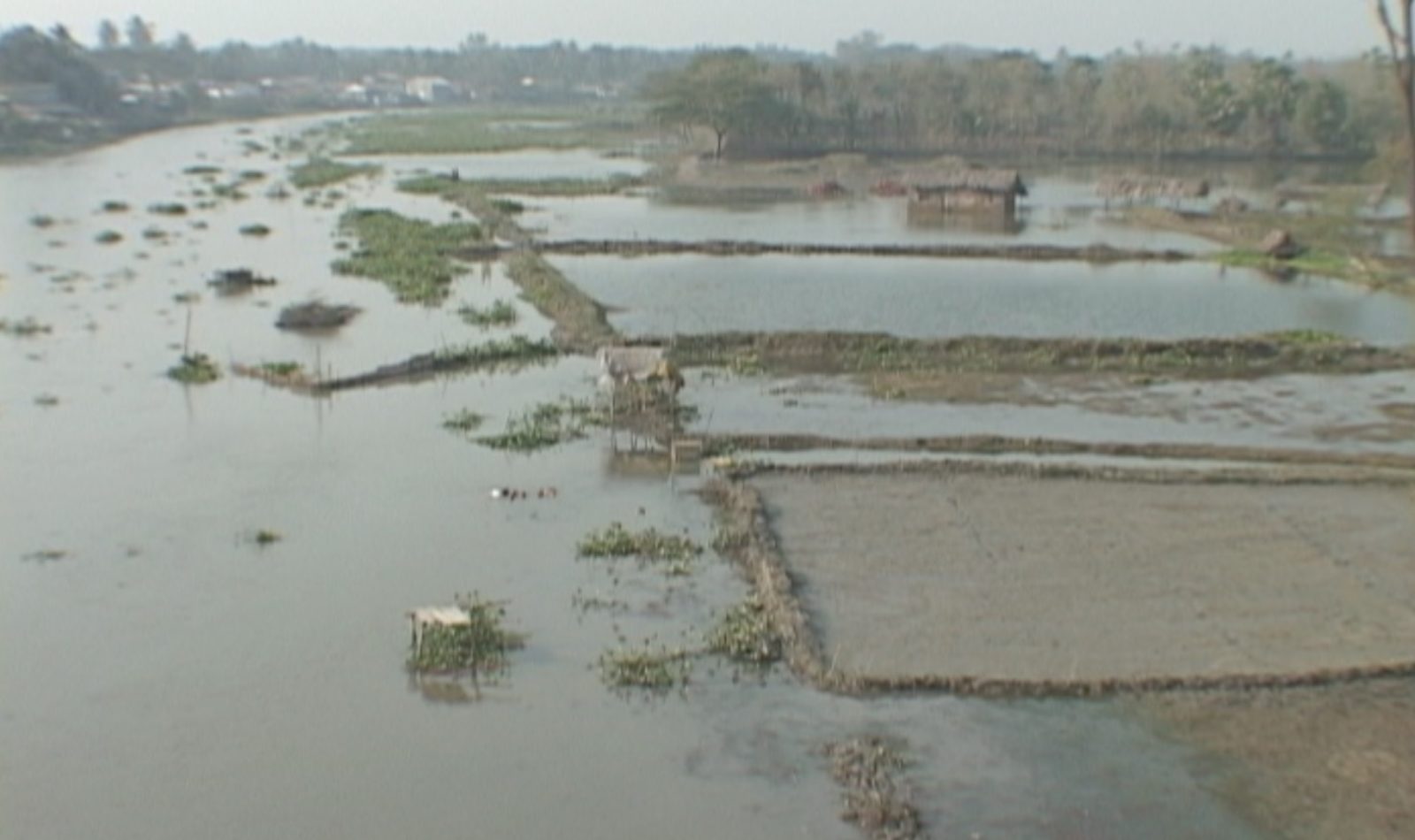 The human suffering is on fullest display at distribution centers, like this one run by the charity Islamic Relief.

On this day, 700 families were given care packages: cooking utensils, toiletries and some basic clothing. Many more went home empty handed.

Sixty-two-year-old Saidur Rahman was among those who took home a bag. His family has gotten some emergency food supplies, scarcely enough to get by. The Rahmans had moved back into their badly damaged house after patching it up. But they say their life is still in tatters because of the death of their 27-year-old son.

SAIDUR RAHMAN: He went out to fish, when the cyclone came he was trying to park his boat but another boat collided with him, he fell in his boat, he was injured and he died.

FRED DE SAM LAZARO: November’s cyclone was the strongest ever recorded in a land that’s seen many. Yet the death toll was among the smallest. The previous storm, in 1991, killed 140,000. This time there were early warnings and schools were used as shelters.

The relief effort, led mostly by international and non-government groups, is helping people put homes together temporarily with corrugated iron sheets. It will take years to build sturdier homes.

But the long term future for the country is a real challenge. Many scientists have said climate change would cause more and more intense cyclones. These farmers have no doubt.

FARMER: It’s not just Cyclone. We are facing a disaster every day with water problems.

FRED DE SAM LAZARO: They say salt water from the encroaching sea is contaminating the rice fields in this low lying delta. Â

FARMER: The crops have reduced productivity and you can see fewer trees grow here. From past years to now, gradually the land is decreasing, going further and further down. We don’t really know but it is our guess that the developed countries that have big factories and machinery, they’re producing some gases. Those gas mix with the air and that is making the environment polluted.

FRED DE SAM LAZARO: The country’s leading climatologist says with tens of millions of people living no more than 30 feet above sea level, Bangladesh is at ground zero for global warming.

ATIQ RAHMAN, Bangladesh Center for Advanced Studies: So, the ocean will rise this way and the central flood plain, which will be inundated more.

Dr. Atiq Rahman says Bangladesh is pummeled from all sides, from the south by cyclones. From the north flow rivers increasingly swollen by melting glaciers in the Himalayas.

FRED DE SAM LAZARO: So it’s making almost like a lake in the middle of the country?

ATIQ RAHMAN: It already does that every year, certain amount of flooding takes place every year.

FRED DE SAM LAZARO: In this, the dry season, it’s easy to measure the impact of erosion. Like people, the trees struggle to stay rooted. If, as some scientists predict, sea levels rise about three feet by the end of this century, a lot of Bangladesh will, simply, disappear.

ATIQ RAHMAN: If the sea level rises by a meter, this is the amount the land, below that line south of that line that will disappear, that will go under water.

FRED DE SAM LAZARO: About a quarter of the landmass.

ATIQ RAHMAN: About a quarter of the land mass.

Joynal Mollah moved into this small room four years ago with his wife and four young children, scraping by as laborers on less than two dollars a day. The land his family had farmed for 200 years and the home on it fell into the river.

JOYNAL MOLLAH, Laborer: I used to have a piece of land, a third of an acre. We used to have a home, it had a big kitchen. As I lost my land and house in the village, the situation compelled me to come here, otherwise no one would live in a place like this.

FRED DE SAM LAZARO: The question is, where will all the people driven from their land go?

Bangladesh has a landmass approximately the size of Wisconsin, which has a population of about five million. Bangladesh’s population is 146 million.

If the country is running out of land, Mohammad Rezwan says it will have to look to the water.

MOHAMMAD REZWAN, Teacher: People have to live on water in some way at the time. And it is the most densely populated country in the world, people they will not have any place to live. It is because of climate change.

FRED DE SAM LAZARO: When Rezwan graduated from architecture school eight years ago, he began to use his skills to design a floating community.

Its first building block was a boat to serve both as school bus — and school.

MOHAMMAD REZWAN: We designed in a way that it has more space and a multi-layered water proof roof on it so that when it rains you still can continue working on it. And there are side windows and the bottom is flat so it can move through the flooded lands.

FRED DE SAM LAZARO: His fledgling nonprofit caught the attention of donors including the Gates and Levi Strauss foundations. Today, there are 41 floating, solar-powered classrooms plying the Natore region in northwestern Bangladesh. For 1,200 students, school is no longer interrupted by flooding.

One boat serves as a library. It makes three-hour stops along the river. Its young patrons can study, check out a book or learn to use the internet.

There’s also a floating power station. Eighty percent of Bangladesh’s villages lack electricity. Rezwan provides families solar lamps, powered by small batteries that people bring in about once a month to be recharged.

MOHAMMAD REZWAN: We always had surplus energy on the boat and at the same time the children in the rural houses, they couldn’t study during the night. We decided why don’t we share our surplus energy with these children? In this way we developed the solar lamp.

FRED DE SAM LAZARO: Rezwan is also trying to help struggling farmers survive on the land they have left.

In a simple assembly line outside his headquarters, used bicycles are, well, recycled into irrigation pumps. They are sold at a 50 percent subsidy to farmers for about twenty-seven U.S. dollars.

MOHAMMAD REZWAN: It is difficult for the landless or marginal farmers to cultivate. Earlier they could get only one crop a year because it is very difficult for them to get the diesel pump. Diesel pump is expensive.

FRED DE SAM LAZARO: The workers he’s hired to make the pumps and farmers like Jalal Ahmed have benefited.

JALAL AHMED: Until two years ago, it was very difficult to bring water to the field so we used to bring it up in bowls that we carried. Before using this pump we used to get only one crop a year. Now I get up to five crops a year because we can irrigate the land.

The challenge, Dr. Rahman says, is the sheer scale of the problem and population. He says people will be forced to move and he suggests in future treaties that these so called carbon credits should be traded for climate refugees.

ATIQ RAHMAN: So if U.S.A. is producing — a city or enterprise, it’s producing so many million tons of carbon, you have to take two villages — villages from Bangladesh. If Switzerland is doing that, take another three villages. You know, that’s probably a fair swap, which will not please a lot of people.

FRED DE SAM LAZARO: Meanwhile, as scientists and relief agencies discuss the long term effects of climate change, their efforts to deal with them are likely to be hindered by the desperate, immediate needs of victims of this country’s increasingly frequent natural disasters.

Months after Cyclone Sidr killed 3,200 people along the Bangladesh coast, the devastated country turns its attention to climate change. A report on recovery efforts and worries about the long-term future of the country.