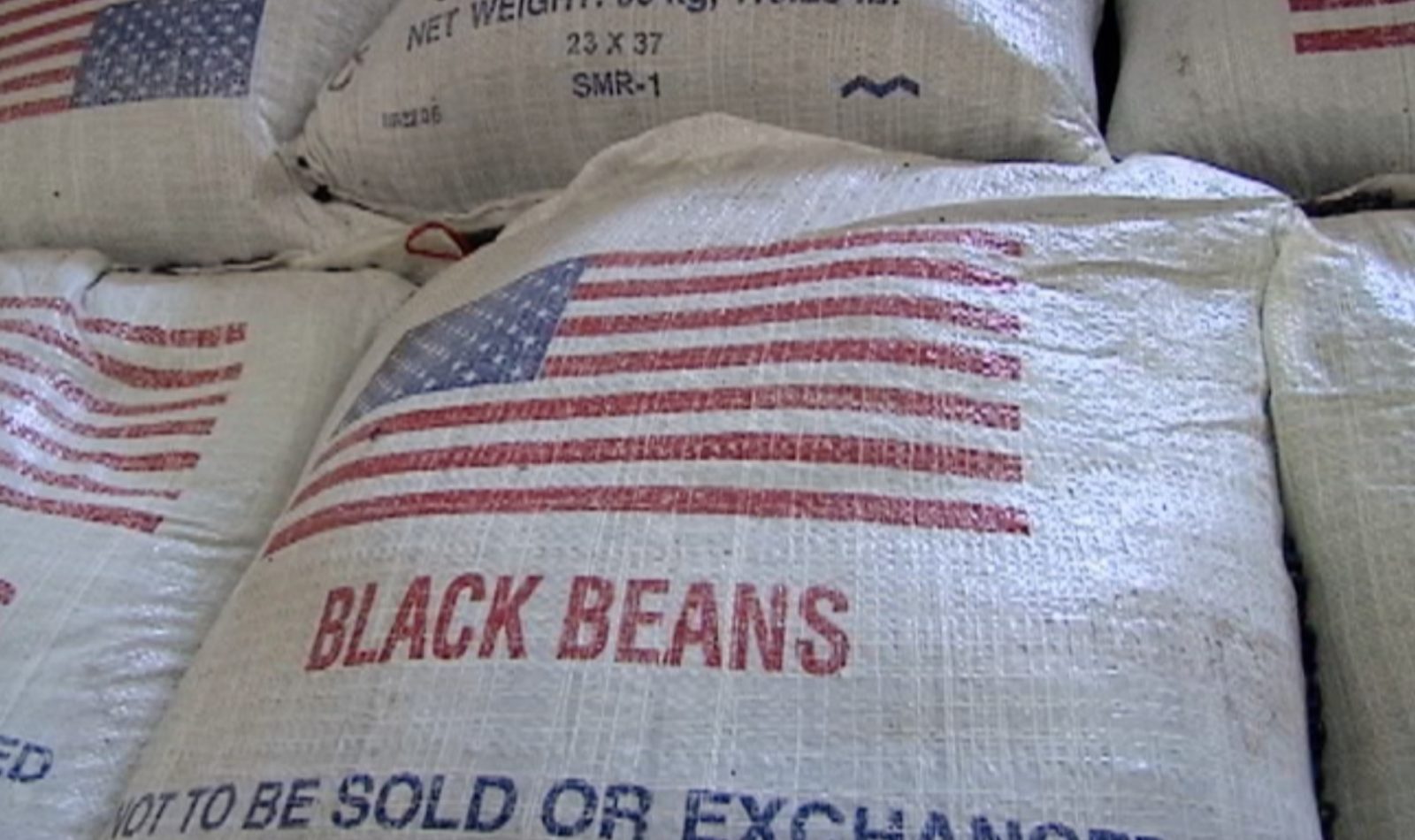 JUDY WOODRUFF: And to our second African story about feeding the hungry in Malawi. Special correspondent Fred de Sam Lazaro has the story. A version of his report will air on the PBS program “Religion & Ethics NewsWeekly.”

FRED DE SAM LAZARO, NewsHour correspondent: At about 10:30 each morning, some 800 children in the southern Malawi village of Kusungo break from studies for porridge.

The principal says attendance has climbed 50 percent since the food program began three years ago. In this country of 13 million, beset by chronic hunger, it’s the only reliable meal of the day.

FRED DE SAM LAZARO: The soy or maize for the feeding program comes from many countries, but the largest contributor is the United States, through a program called Food for Peace. It began in the 1950s as a means to use U.S. grain surpluses to help countries hit by food crises.

FRED DE SAM LAZARO: The United States is the world’s single-largest food aid donor, but there are intermediaries, agribusinesses and shipping companies which by law have to be American, and they consume a good part of the U.S. food aid dollar.

The General Accountability Office says two-thirds of that U.S. food aid dollar goes toward administrative overhead. That’s led critics of the $1.2 billion program to argue it helps private contractors more than the hungry.

CECILY BRYANT, CARE Malawi: We felt very strongly that the inefficiency and the waste that was happening throughout the current system just had to be addressed. And if we didn’t take a stand and try and make a change, then this would just continue.

FRED DE SAM LAZARO: Care’s Cecily Bryant argues it would be much more efficient if U.S. assistance came directly in the form of cash. The money could be used to train farmers and to buy grain locally, cutting delivery cost and time, while developing markets for African farmers.

In fact, many aid agencies generate cash to run such programs by selling these American commodities to African wholesalers and traders, a practice called monetization.

MALAWI CITIZEN (through translator): This is where we grow soy beans. You need 75 centimeters between ridges for the highest yields.

CECILY BRYANT: Food alone isn’t going to change anything in the long run. We’re working with farmers to teach them to harvest greater yields, to be able to market surplus once they reach that level.

FRED DE SAM LAZARO: Despite myriad problems with poor infrastructure and uneven distribution that leave many hungry, there have been overall grain surpluses. Rains have been good for two years, and subsidies have helped farmers buy seeds and fertilizers.

BINGU MUTHARIKA, president of Malawi: We now have had two successive years of surplus. And the year I took over, we were told Malawi was poor and that we must go to the rest of the world and beg that we are poor and the world will feel sorry for us. I said, “No, that’s not the way globalization works.”

People will come to Malawi if there are investment opportunities, if we are helping ourselves, and they want to be part of that success story. Nobody, nobody wants to be part a failing story.

FOOD AGENCY WORKER: So are they looking forward to a good harvest this year?

FRED DE SAM LAZARO: Indeed, the United Nations food aid agency, the World Food Programme, is now using cash it gets from non-U.S. donors to increase local purchases of grain. But for many farmers, the concept of a surplus is new, one they almost fear jinxing.

FOOD AGENCY WORKER: OK, so they don’t anticipate having a surplus this year?

TRANSLATOR: No, he’s indicating that they are not expecting surplus.

FRED DE SAM LAZARO: These farmers weren’t sure how to answer a simple question from an agency better known for giving away rather than buying food.

DOMENICO SCALPELLI, World Food Programme: That’s a huge amount of food, and it’s the largest amount we’ve bought ever in Malawi. A lot of it was not only for Malawi, but a lot of it also went to Zimbabwe, it went to Democratic Republic of Congo.

We bought food even for West Africa. And that was because the price was the best at the time and the quality was good, competed internationally.

Part of the philosophy behind it is to try and bring up local farmers and traders to a point where they can, in fact, compete internationally.

FRED DE SAM LAZARO: It’s a goal some in Washington support. The Bush administration has proposed that a quarter of U.S. food aid be sent in cash. And that idea has the support of many Democrats in Congress.

But it gets nowhere in the influential House and Senate Agriculture Committees, whose members come predominantly from farm states. They’ve insisted that all assistance remain in the form of U.S.-grown commodities shipped on U.S. flag carriers.

Representative Earl Pomeroy, a North Dakota Democrat, says sending cash instead of the usual grain or cooking oils could do damage in some developing countries.

REP. EARL POMEROY (D), North Dakota: You go into some of these small economies with a check, buy a bunch of commodity for food aid, you’ve just drove prices out of sight and you hurt everybody else.

FRED DE SAM LAZARO: More importantly, Pomeroy says he fears any changes in the program could jeopardize fragile congressional support for what remains the world’s largest food aid program, even though it accounts for 0.3 percent of the U.S. farm program.

REP. EARL POMEROY: One of the things about the structure of our program is that it’s been able to sustain congressional support through all kinds of political circumstances.

You know, even in the years I’ve been in Congress, I’ve seen very different environments relative to the receptivity of members of Congress to supporting foreign aid.

Well, if feeding the world’s hungry becomes your basic foreign aid football, we’re not going to be a very predictable leader of the global response to hunger.

FOOD AGENCY WORKER: … for purchasing, we’d want to be targeting associations. I mean, it’s impossible for us to deal individually with each farmer and each farm.

FRED DE SAM LAZARO: World Food Programme officials say they make local purchases carefully. They reject criticism that this causes prices to rise, but they’re not about to reject Food for Peace donations.

DOMENICO SCALPELLI: I am asked this question quite a bit, and I’m not going to bite the hand that helps feed essentially a million Malawians today. And the United States government is, indeed, the number-one largest donor to Malawi, still.

Would you not prefer just straight cash assistance?

NICK FORD, Catholic Relief Services: Absolutely. That’s going to be a much more efficient use of the American taxpayer’s money.

We still have a service to provide to the target communities for our development activities. Monetization provides resources that do address the root causes of hunger and poverty in these countries.

FRED DE SAM LAZARO: What all sides seem to agree on is that more food aid, whether in cash or food, is needed. Only 30 percent of Malawi’s children receive a daily school meal, and that number that could fall as global food prices continue their record rise.

Fred de Sam Lazaro reports on the debate over the benefits of providing cash or crops to recipient nations. He also looks into the growing effects of domestic farm law on world food markets.