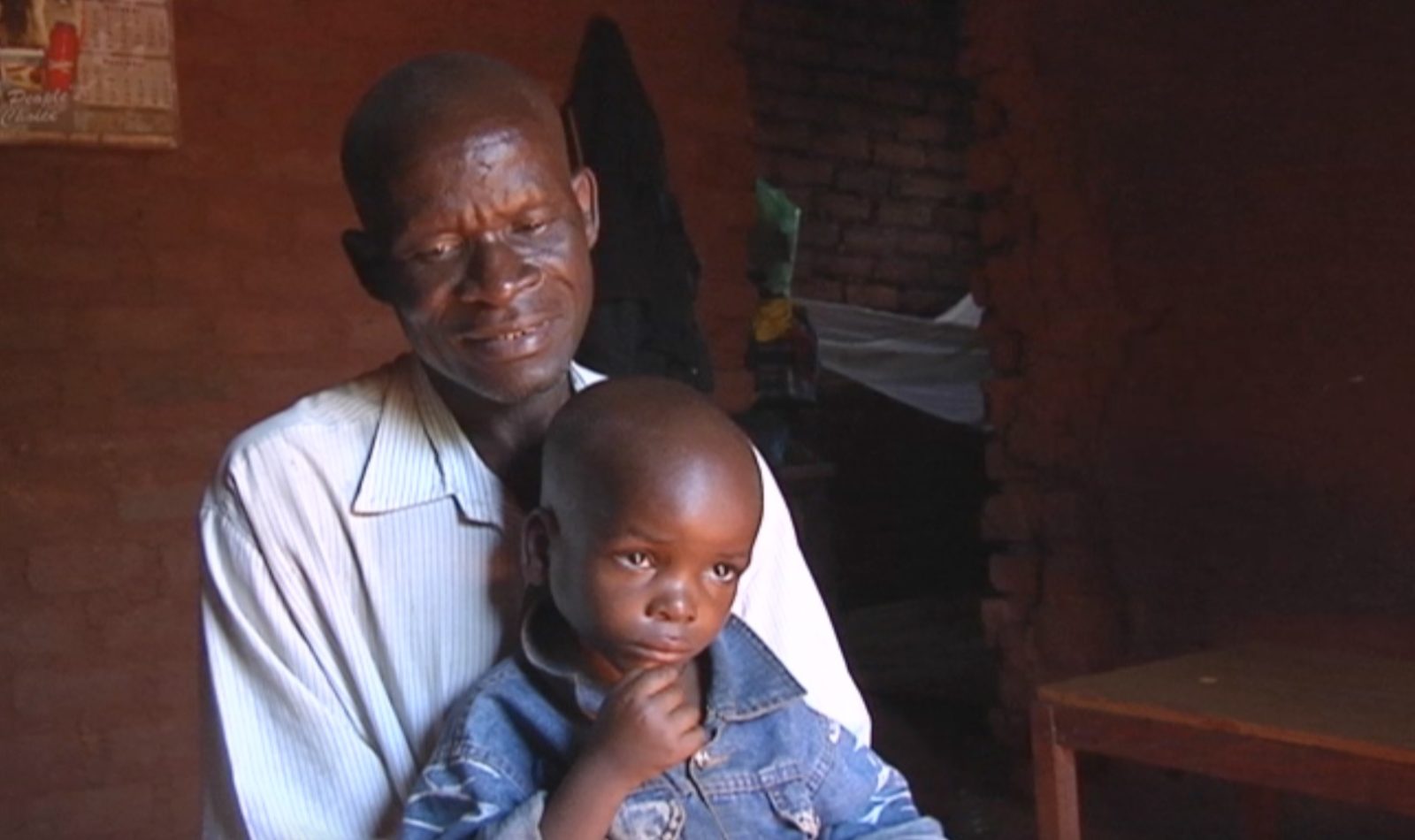 FRED DE SAM LAZARO, NewsHour Correspondent: In Malawi, 1 out of every 4 children dies before reaching age 5. Famine is chronic, and AIDS has left tens of thousands of orphans often in the care of struggling grandparents, like Robin Nangwandu.
Many children, like his grandson, McAnthony, are HIV-positive.

FRED DE SAM LAZARO: Until recently, there were just two pediatricians for the entire public health system. Dr. Peter Kazembe was one.
How many children in this country, approximately, are HIV-positive?

FRED DE SAM LAZARO: … 83,000 children, and to serve all of them, you had two pediatricians, essentially?

FRED DE SAM LAZARO: He says many Malawian doctors have left for more prosperous countries, like neighboring Botswana, Britain, and the U.S.

DR. PETER KAZEMBE: The issues are the same in all the countries in southern Africa certainly, you know, with salaries, poor salaries, poor working conditions. There’s nothing more frustrating than knowing what you need to do, but not having the resources to do it.

FRED DE SAM LAZARO: Dr. Kazembe was hired to lead one American effort to bring health care resources to Malawi. Its center is a modern, American-style clinic, complete with 11 young American doctors.
Colorado native Chris Buck and colleagues came here soon after completing their residency. Each will spend at least one year rotating through this busy clinic and also in some Malawian public health facilities.

DOCTOR: Is he using his mosquito net every night?

Dr. Portia Kamthunzi Working with HIV-positive children, I feel that I can relate to them better than other people who are coming from other countries, because, in a way, I know the culture. I know the kind of background that they’re coming from.

FRED DE SAM LAZARO: The Pediatric Aids Corps program is the brainchild of Dr. Mark Kline of the Baylor College of Medicine in Houston. He wanted to address both Africa’s brain drain and its struggle with HIV.

DR. MARK KLINE: You know, obviously, a number of long-term solutions have to be put in place to encourage African doctors to remain in Africa and to bring back African doctors who have emigrated to the developed world. But while those fixes are being put in place, we can’t afford to lose a generation of children to this epidemic.

FRED DE SAM LAZARO: With a grant from drug giant Bristol-Myers Squibb, Kline designed a program that pays doctors, like Omolara Thomas of New York, a stipend of $40,000 a year. It’s a fraction of what they could earn at home, but the program also pays down up to $40,000 instudent loan debt for each year of service.

DR. MARK KLINE: Half of the doctors that we have in the program could not have participated were it not for the student loan debt repayment provision, because they simply couldn’t afford to do so.

FRED DE SAM LAZARO: Three years after it began, about 60 physicians have been placed in 11 African countries.
DOCTOR: So you want to come take a listen again, just listen to both lungs?

DR. SAEED AHMED: So if you listen — if you compare the left to the right, the right is quite decreased compared to the left, correct?

FRED DE SAM LAZARO: A key goal of the Baylor program, besides providing American doctors, is improving working conditions so the Malawian providers don’t leave, so some who have left come back.

DR. PETER KAZEMBE: Well, a lot of people want to stay and work, but, you know, you have to provide them, you know, basics for them to survive comfortably.

FRED DE SAM LAZARO: The Baylor clinic offers its staff more comfortable wages by local standards and basics that are rare in the spartan public health care system: equipment that works, hygienic facilities and drugs. That was enough to bring Dr. Portia Kamthunzi home from the U.K., despite a big pay cut.

DR. PORTIA KAMTHUNZI: It’s not just the money for me. It’s the job satisfaction, as well. It’s different from working with the government institute, because there’s a lot of shortages of supplies, so it’s different here. You have almost everything.
Working with HIV-positive children, I feel that I can relate to them better than other people who are coming from other countries, because, in a way, I know the culture. I know the kind of background that they’re coming from.

Dr. Fitzhugh Mullan George Washington University
The principles, the issues that people learning global health and living global heath will bring home will not only be valuable globally, but they’re going to be valuable in leading our country in the future.

FRED DE SAM LAZARO: Compared to medical care in the rest of Malawi, this clinic, with a pharmacy dispensing life-saving antiretroviral drugs, or ARVs, may be a luxury. But for the visitors, this is a culture of severe limits compared to the do-whatever-it-takes American system they trained in.DR.

CHRIS BUCK: I have one patient I can think of in particular that’s a 17-year-old boy. He’s pretty severely immune suppressed. He’s been on ARVs for a long time. And he has a gastric tumor. And it’s just kind of slowly killing him, unfortunately.
And I can think of so many things I could do for him in the states to improve his prognosis — from diagnostic tests to different medicines — and here, I’m really hampered and limited. I really find that to be distressing.

DR. OMOLARA THOMAS: I think every day you wonder and you say to yourself, when you’re prescribing these medicines, what difference really is this going to make, you know? Really what they need is food.

DR. SAEED AHMED: I worked at a very high-acuity hospital in New York, Columbia. And if one patient died or two patients died in a week or a month, it would be a big deal. But we come here and during our time on the wards, we might have three or four patients die a day. And coming to terms with that and coming to terms with there being limits to what we can do for kids was shocking and hard.

DR. FITZHUGH MULLAN, George Washington University: We cannot keep developing our own health care system at the rate we are, that every year or two it eats up another percent of our gross domestic product. And working abroad is an internship, a trial by fire in learning how to deal with constrained resources.
Now, obviously, on a very different level, but the principles, the issues that people learning global health and living global heath will bring home will not only be valuable globally, but they’re going to be valuable in leading our country in the future.

FRED DE SAM LAZARO: Mullan has long advocated a much larger federal program like Baylor’s. It would repay African countries for helping fill the U.S. doctor shortage, he says, and be a strong boost to the American image.

Dr. Mark KlineBaylor College of Medicine
Most of them do it because they feel that AIDS in Africa is the challenge of this generation. This is a very highly idealistic group of young physicians, by and large, and they want to do something very meaningful straight out of their training.

DR. FITZHUGH MULLAN: There are battles for hearts and minds going on in Africa. China is very present. And sending doctors abroad, sending nurses abroad is partly a statement of what we are beyond Coca-Cola and other commercial enterprises.

FRED DE SAM LAZARO: There’s no shortage of doctors who want to go. Baylor’s Dr. Kline says, for every one chosen, he has to turn away two.

DR. MARK KLINE: I think most of them do it because they feel that AIDS in Africa is the challenge of this generation. This is a very highly idealistic group of young physicians, by and large, and they want to do something very meaningful straight out of their training. They want to have an immediate impact.

FRED DE SAM LAZARO: The young doctors say their Africa stint has been profoundly formative and likely not their last. Dr. Thomas is bringing it full circle in her family. Her parents are Nigerian immigrants to America.

DR. OMOLARA THOMAS: I’ve been involved with trying to develop hopefully a program with Nigerian, I guess you can say, expatriates to the U.S. and physicians there who at some point do want to come back to Nigeria and do want to work.

DR. AMY SIMS: I’m actually going back for specialist training in a couple months in the states. And specialists are something that are kind of few and far between here in Africa. And so I plan to use that to train African health workers and kind of pass on that knowledge. And so I always see myself coming back to Africa.

FRED DE SAM LAZARO: Amid all the poverty and suffering, they say, are rewards harder to measure, but just as meaningful, like sharing good news with young McAnthony’s grandfather…

FRED DE SAM LAZARO: … or like watching the teen club on the clinic grounds, knowing that, without this clinic, few of these patients would have survived to be teens.

The Challenge of This Generation

In Malawi, where some 83,000 children are infected with HIV, a new program brings U.S. doctors to the East African country and encourages African doctors to set up practices in their hometowns, instead of leaving for more prosperous countries.