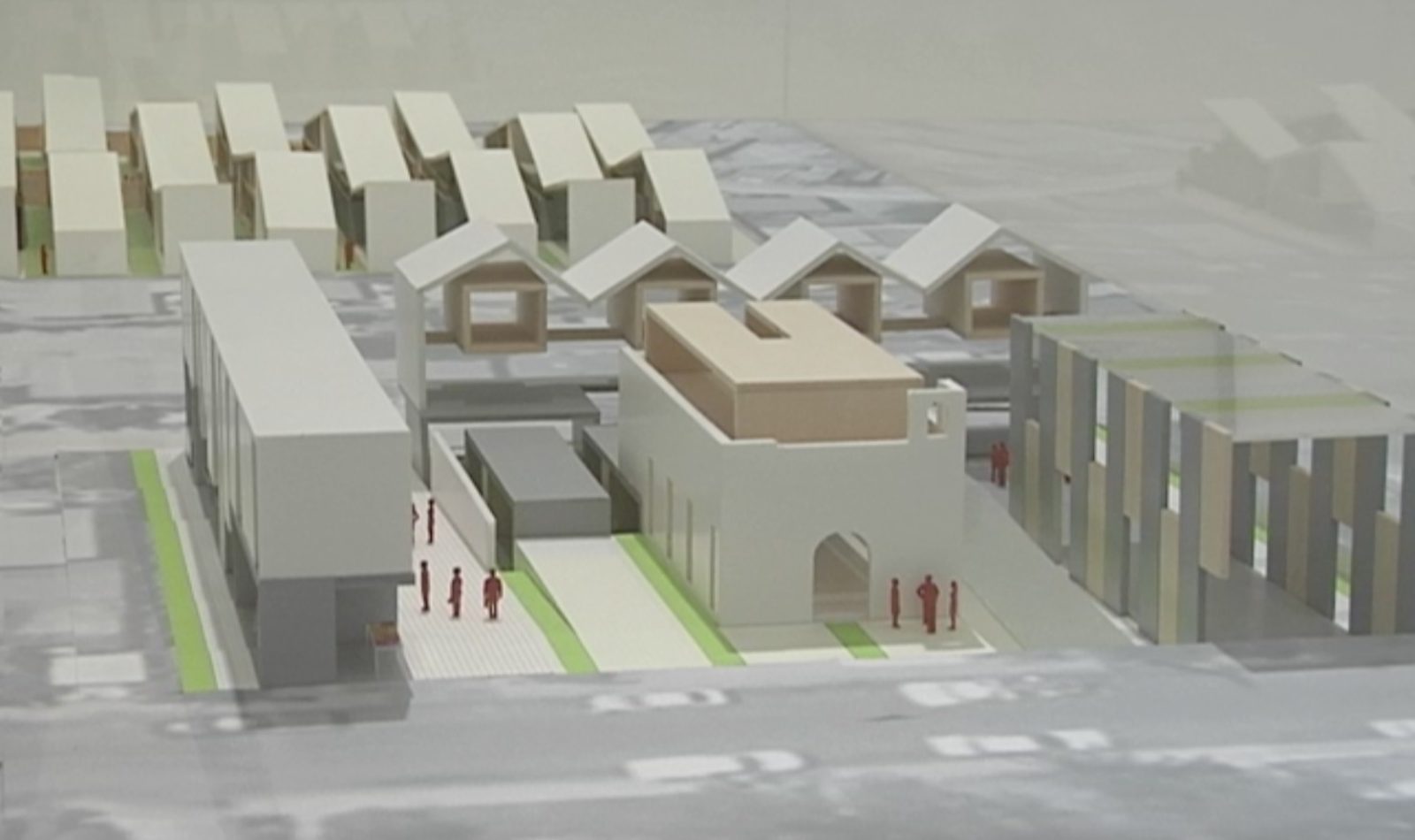 FRED DE SAM LAZARO, NewsHour Correspondent: From the heart of urban Minneapolis, the Walker Art Center is tackling the stereotype about suburbs, that of a colorless, design-free zone.

TRACY MYERS, Curator: I grew up in suburbia and escaped as soon as I possibly could. And so it required a certain amount of effort to maintain a kind of objective or non-judgmental stance. But through this exhibition, you know, I have sort of rethought my assumptions.

ANDREW BLAUVELT, Curator: The idea of the American suburb is constantly changing, although the paradox is that it seems to stay static in most peoples’ minds. Most people tend to have a post-World War II, what we call a sitcom suburb image in their head of what constitutes suburbia.

FRED DE SAM LAZARO: What curators Andrew Blauvelt and Tracy Myers try to show is the rich variety in today’s suburbia. The exhibit, called “Worlds Away: New Suburban Landscapes,” features drawings, sculpture, photography, and multimedia platforms, inevitably inspiring comment not just about the art, but about suburbia itself.

They offer glimpses of McMansions in outer suburbs, tract homes in what once were cornfields, and the residential settings in California’s San Fernando Valley, where the majority of adult films are shot.

ANDREW BLAUVELT: How do you begin to represent diversity in the suburb? You’re reliant upon artists, because that’s what we do, and that tends to be more poetic than it is didactic.

FRED DE SAM LAZARO: Among the works on display are those of Laura Migliorino, a community college photography professor who lives in a bungalow in Minneapolis. After years of commuting 20 miles outside the city, she began to get curious about the places in between.

LAURA MIGLIORINO: The governor — yes, the governor of Minnesota to me was the archetypal suburbanite. He was white; he was middle-class; he was evangelical Christian Republican.

And then I was just asking myself some harder questions. I don’t want anyone to paint all Italians in the same way or all gay people in the same way. And so that’s how this started. I just started looking around.

It’s so massively uniform, and, I mean, I do feel like I’m in the twilight zone right now.

FRED DE SAM LAZARO: Behind the uniform architecture, she found anything but uniform demographics: same-sex couples, single-parent households, and a diversity of immigrants. She portrays them in their environs with a distinct style and technique.

LAURA MIGLIORINO: You have the portraits of the people. And then I overlay them with five, six, seven layers of imagery.

So I have the portrait of the family, and that’s one layer, but then I overlay other subdivisions, depending on composition, color, tonality, design, traffic, and even farmland.

Suburbs as the American dream

FRED DE SAM LAZARO: Curator Blauvelt says the suburbs have become the face of America that would-be Americans aspire to from distant lands.

ANDREW BLAUVELT: Today, the suburbia is the first choice for immigrants, which is vastly different than, say, in the 19th and early 20th centuries, where the city core was the first stopping point for most immigrants.

ANDREW BLAUVELT: What he’s looking at is literally the waste of America’s old suburbs being used and recycled into what he would call the housing, the emergency housing of Tijuana.

And then, from the opposite direction, he’s looking at the influences from Mexico to the United States, and specifically, of course, both legal and illegal immigration, and then occupation and habitation of San Diego’s suburbs by different cultures.

FRED DE SAM LAZARO: The images of Tijuana show comfortable mixed use, in sharp contrast to the strict zoning that has dictated how Americans, particularly suburbanites, shop: in strip malls and shopping centers.

That retail experience is another focus of the exhibit, including this look back at a high point of suburban retail building design from the ’70s.

VIDEO SPEAKER: I don’t even know what’s inside, so I’m going to go in and look.

FRED DE SAM LAZARO: These film images highlight an attempt by the defunct retailer Best Products to set some of its stores apart, to brand itself with buildings that were themselves sculpture.

TRACY MYERS: If you watch the film, you’ll see people say, looking up at it, like, they’re sort of worried about the building falling down or the facade with the bricks cascading down the front of the building.

I love the fact that he commissioned a group of people who were committed to bringing art out of the museum into the world of everyday people, into peoples’ everyday lives.

FRED DE SAM LAZARO: Today, big box retailers are the norm in the suburbs, with very little by way of distinctive design.

But, again, uniform architecture has not meant uniform economics. Seven percent of malls and big boxes are abandoned, according to one study. Their re-use is depicted in numerous ways here, reinforcing the idea of diversity in the suburbs.

TRACY MYERS: For example, the photograph by Julie Christensen of a big box that’s been converted to an office for Head Start, Head Start was initiated as a program for the urban poor.

And so what that tells us about suburbia is that now there’s poverty in suburbia, and there might always have been, but now somebody’s documenting it. Somebody’s capturing it.

FRED DE SAM LAZARO: Other artists have thrived alongside, or inside, the successful big box stores, where the displays include the candid photographs of Brian Ulrich and the sculptures of Stefanie Nagorka in the aisles of Home Depot.

TRACY MYERS: Initially, it was sort of guerilla art. She would kind of go in and build these things without permission. Then she started photographing them.

FRED DE SAM LAZARO: These sculptures are now acclaimed after their humble beginnings.

ANDREW BLAUVELT: I think it shouldn’t have been too surprising, because artists have always drawn inspiration from the world around them.

FRED DE SAM LAZARO: And, he says, even architects are now engaging with suburban design.

ANDREW BLAUVELT: A lot of architects aren’t primarily in the design lead when it comes to developing new aspects of suburbia. In those cases, we’re looking at kind of retrofit solutions to existing suburban problems.

FRED DE SAM LAZARO: There’s one provocative example envisioned in this speculative work by the New York architectural firm LTL. It integrates housing and shopping. Housing is placed on the roofs of big box stores on vast tracks of land. Adjacent big boxes are adapted for use as libraries, schools, and community centers.

It’s a take-off on the so-called smart growth policies some cities have adapted to reduce energy use and to increase human interaction.

TRACY MYERS: Very often, urbanites in general and people in my field in particular are very derisive of suburbia. And what LTL did was sort of take as a given this condition of horizontality and, rather than trying to sort of eradicate it, neutralize it, or otherwise dismiss it, treated it as an opportunity for a new kind of suburban development.

FRED DE SAM LAZARO: It may be a timely opportunity, with gasoline at $4 a gallon, but whether and how such radical shifts catch on remains to be seen in what’s likely to remain an enduring automotive culture, itself abundantly displayed in this exhibit.

“Worlds Away” moves to the Carnegie Heinz Architectural Design Center in Pittsburgh when it ends its Minneapolis run. It will live on in a companion 600-page catalog.

An art exhibit at the Walker Art Center in Minneapolis aims to examine stereotypes tied to life in the suburbs and shows the work of artists and architects influenced by the slew of social issues outside of cities.