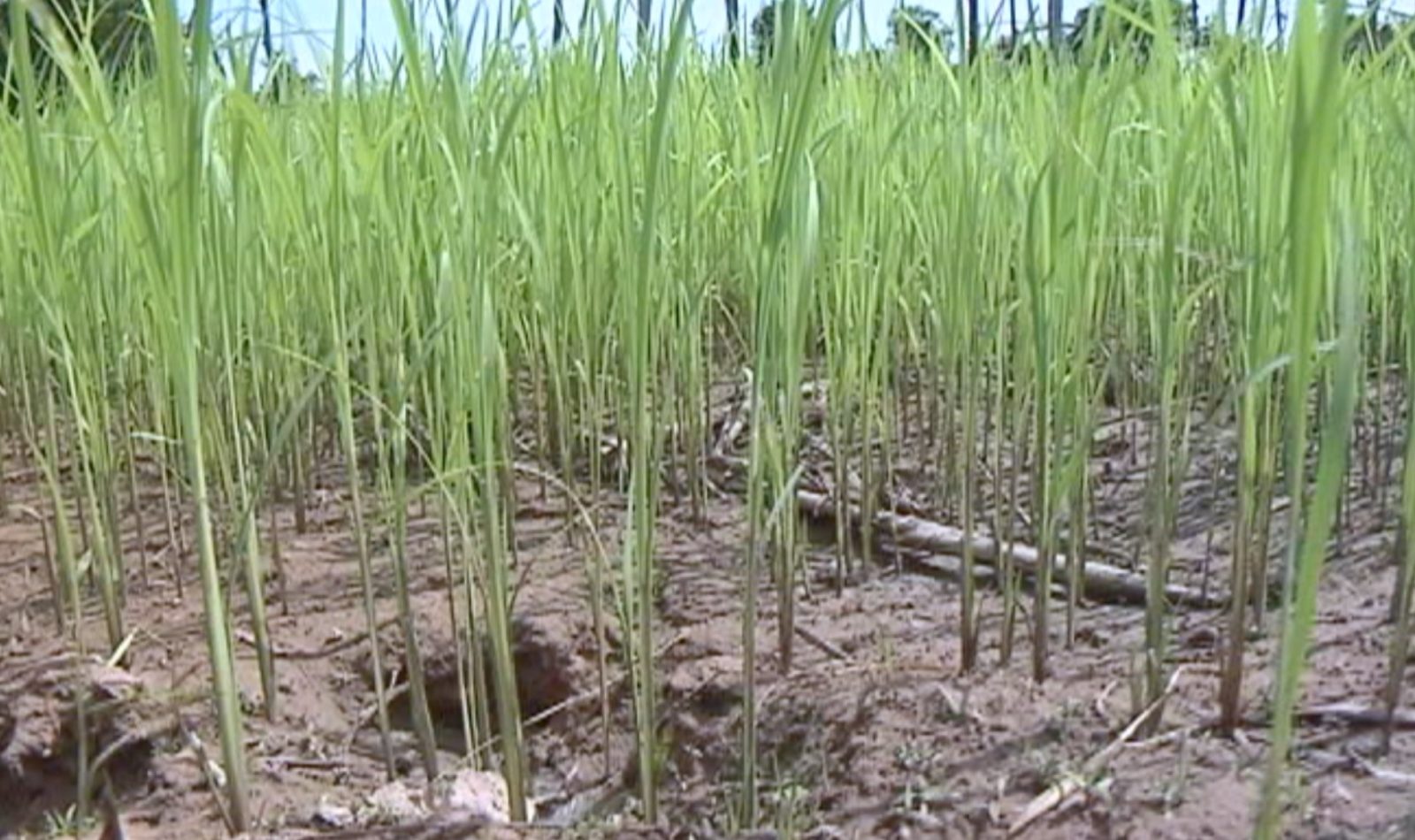 FRED DE SAM LAZARO, NewsHour Correspondent: Rice is a staple in most of Asia, and shortages and high prices have triggered riots in several countries. But here in Cambodia, things have been calm, thanks to record harvests, says Minister of Information Khieu Kanharith.

KHIEU KANHARITH, Minister of Information, Cambodia: The food situation in Cambodia is good. You know, we had the last year production be at a surplus of 2 million ton of rice. And this is a good reserve for food security. Despite that, we can even get more.

FRED DE SAM LAZARO: Cambodia even exported some of its surplus to the Middle East and Africa, and the government hopes to double production in the next few years, welcome news in a global rice market that’s seen tightening supplies.

Yet success is all the more noteworthy given Cambodia’s recent history.

This museum offers a glimpse of how the Khmer Rouge regime wiped out almost two million people in the 1970s, almost a quarter of the population. With them went farming know-how. Hundreds of rice strains that over the centuries have adapted to local conditions died off, as well.

PRUM KETH, Farmer: When we planted the traditional rice in the past, we only got about one ton per hectare. Now it’s increased more than twice that. We get more than two-and-a-half tons her hectare

FRED DE SAM LAZARO: Men Sarom heads Cambodia’s rice institute, which has tried to reverse the terrible legacy. Set up in the mid-’80s with help from the Australian government and the International Rice Research Institute, they began to bring rice back to what became known as the killing fields.

HENG VUTHY, Extension Agent (through translator): We tell them to use the right type of seedlings, especially the ones from the institute. Farmers find it easier to use chemicals because they don’t need to work as hard, but it doesn’t help them the next year, because they have to keep buying it.

We train them on how to space their crops, how to use natural fertilizers, instead of the chemical ones, and how to prepare their rice fields.

FRED DE SAM LAZARO: One of her clients is Kun Kamara, who uses homemade compost and seedlings developed by the rice institute on the nine acres she cultivates with her husband, Prum Keth.

PRUM KETH, Farmer (through translator): When we planted the traditional rice in the past, we only got about one ton per hectare. Now it’s increased more than twice that. We get more than two-and-a-half tons her hectare.

Water management systems are not as well developed as they are, for example, in Thailand and Vietnam. So in the wet season, it gets very wet and floods.

FRED DE SAM LAZARO: Cambodia’s farms are productive once again, but they’re still far behind those of neighboring countries like Thailand or even Vietnam. The technologies and methods are still outdated, and then there’s the inescapable legacy of the warriors.

UROOJ MALIK, Asian Development Bank: There are a lot of unexploded ordnance in these countries. Vietnam has, I think, managed to clear most of it, but there are landmines there, as well.

FRED DE SAM LAZARO: Urooj Malik of the Asian Development Bank says as much as 20 percent of Cambodian farmland is still off-limits because of landmines. And, he says, there are other barriers that modern genetics and technology alone cannot surmount.

UROOJ MALIK: Water management systems are not as well developed as they are, for example, in Thailand and Vietnam. So in the wet season, it gets very wet and floods. In the drought season, it’s totally dry and there are large chunks of land that are not available, don’t have available water.

So, I mean — so I think, again, irrigation and water resources management is another important key to increasing productivity.

FARMER (through translator): As a farmer, I don’t want anything except modern equipment, like a tractor. I don’t want to use the cows anymore.

FRED DE SAM LAZARO: Cambodia has too few mills, where rice kernels are separated from their husks. Those mills that do exist are antiquated and break a lot of the rice grains, diminishing both their market and aesthetic value, says the Chan Sophal, who heads an economic research organization.

CHAN SOPHAL, Cambodia Economic Association: We have very poor post-harvest infrastructure. And much of the harvest has to go out immediately because there’s no place to be kept.

We eat rice seven days a week, every day. We also eat fish every day, half a kilo. I don’t have enough money. I’m always thinking about food.

FRED DE SAM LAZARO: Because of poor storage, a lot of grain decays or is eaten by rodents. Because of poor roads, Cambodia’s surplus is unevenly distributed. Chan says it’s particularly hard on the landless peasants and urban poor, who buy rather than grow most of their food.

CHAN SOPHAL: In the past three years, we have generated 50 percent surplus. However, this doesn’t mean every household has food sufficiency. And there’s a level — a high level of inequality of land ownership. Twenty percent of rural households don’t own any land, I mean, agricultural land.

INTERVIEWER (through translator): Do you have any land for cultivation?

PRAK SAT, Cambodian Citizen (through translator): No, I don’t have land for cultivation.

FRED DE SAM LAZARO: Among those answering a survey by Chan on food security was 68-year-old Prak Sat. She takes care of an ailing husband and cooks for an extended family of seven.

INTERVIEWER (through translator): How many times do you eat rice in a week?

PRAK SAT (through translator): We eat rice seven days a week, every day. We also eat fish every day, half a kilo. I don’t have enough money. I’m always thinking about food.

For the first time, we got a historic donation of 2,000 tons from the government of Cambodia for our school feeding and other vulnerable group feeding.

FRED DE SAM LAZARO: Despite the everyday struggles, many Cambodians take a historical view, especially those, like Prak Sat, who survived the Khmer Rouge years.

PRAK SAT (through translator): It’s better than before. Now we have enough rice and food to eat, and we don’t have to worry about being executed.

FRED DE SAM LAZARO: And Cambodia is better off than many countries that must depend on increasingly scarce and expensive imported rice, says Chan.

CHAN SOPHAL: My feeling is the positive impact of high food prices is greater than the negative impact, because we are a net producer.

FRED DE SAM LAZARO: In other words, the gain from selling rice at a higher price is yielding dividends that offset the cost of buying higher priced food?

FRED DE SAM LAZARO: In the aggregate, but not…

FRED DE SAM LAZARO: One measure of Cambodia’s recovery is the World Food Programme’s school breakfasts, which are made possible by food donations from rich countries. The program, which operates in 74 countries, has come under severe strain due to rising grain and freight prices.

COCO USHIYAMA, World Food Programme: For the first time, we got a historic donation of 2,000 tons from the government of Cambodia for our school feeding and other vulnerable group feeding. And so with the Cambodians, the other donors also came through, but we still need more resources.

FRED DE SAM LAZARO: This year, she says, the Cambodian government has increased its rice donation to 3,000 tons.

New use for land

Amid rising food prices and supply shortages, Cambodia has managed to increase its food production by turning the war-ravaged country’s former “killing fields” into rice fields.