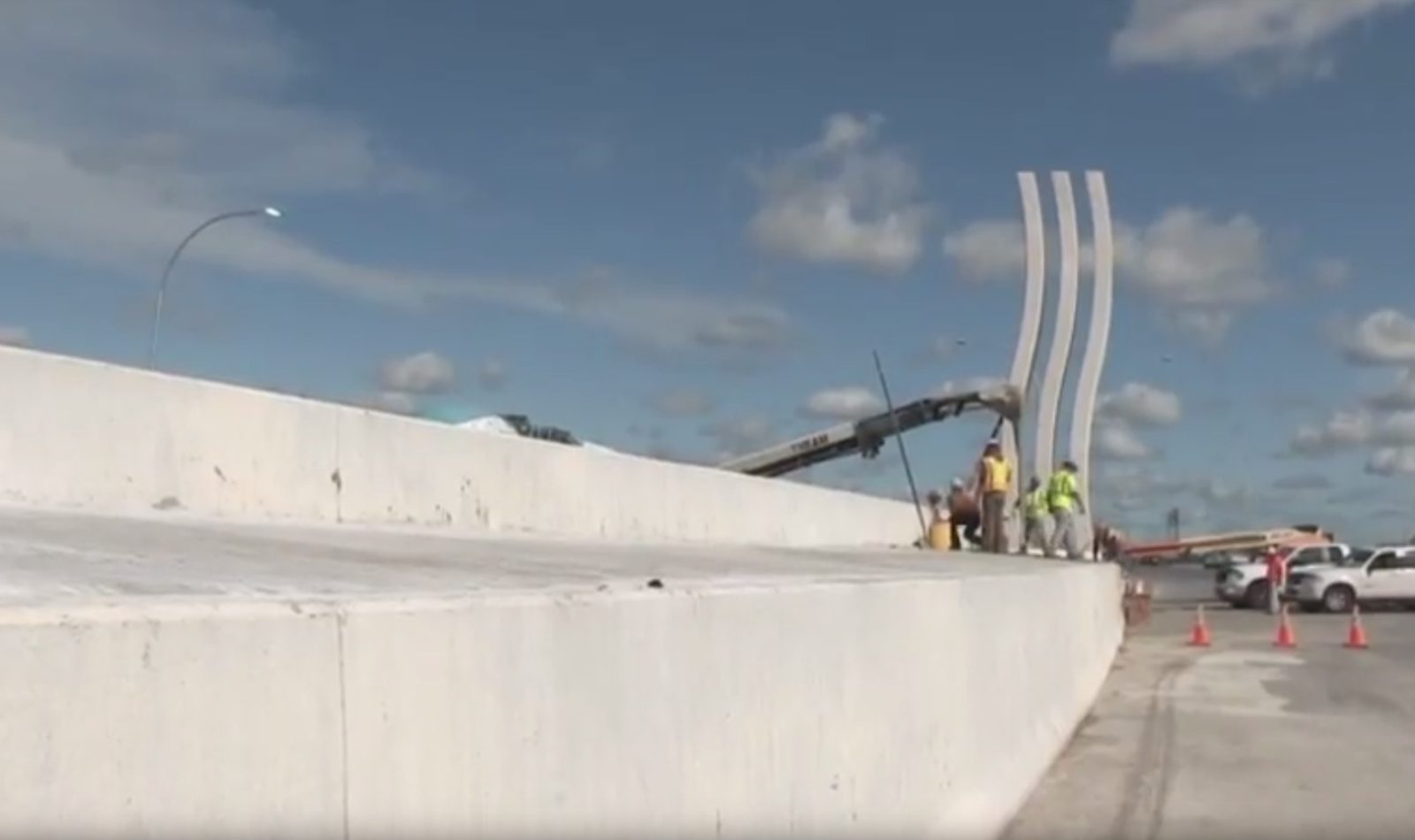 GWEN IFILL: Finally tonight, another rebuilding story, this one out of Minneapolis. A little more than a year after the deadly I-35 bridge collapse, its replacement opens to traffic tomorrow.

FRED DE SAM LAZARO, NewsHour Correspondent: Workers put on the final touches Monday morning as a host of dignitaries gathered on the new bridge, finished three months ahead of schedule. But the celebration has been muted, as U.S. Transportation Secretary Mary Peters noted.

MARY PETERS, U.S. Secretary of Transportation: This is kind of a bittersweet day. It’s a day that we remember those who tragically lost their lives and those who were injured here, but also a day of new beginning, as we see this new crossing bring the community back together again.

FRED DE SAM LAZARO: A memorial was announced, to be built in a nearby park for the 13 who lost their lives and 145 who were injured in one of the most spectacular infrastructure failures in U.S. history.

REP. JAMES OBERSTAR (D), Minnesota: Out of mind-numbing tragedy has come an engineering marvel. Out of the rubble of failure of a bridge has come a lesson for the future of bridge engineering and construction.

Tom DeHaven Bridge Design Team The workers have been working pretty much around the clock since we started, and it’s really come together.

TOM DEHAVEN, Bridge Design Team: The workers have been working pretty much around the clock since we started, and it’s really come together.

FRED DE SAM LAZARO: Tom DeHaven is a designer who worked with the Denver-based general contractor. The state awarded Flatiron-Manson the contract, scoring it highly on a design that blends in with its surroundings and neighboring arch bridges, a focus on safety and speed.

In fact, DeHaven says, building proceeded in stages even before his team had completed their final design.

FRED DE SAM LAZARO: Also to speed things up, concrete was used for the superstructure instead of steel, which would have had to be fabricated and shipped in.

Concrete was acquired locally, but curing almost 500,000 cubic yards of it was no picnic in the minus 20 to 30 degree temperatures that often visited Minneapolis last winter.

TOM DEHAVEN: You have to keep concrete above about 50 degrees so it will keep hydrating, so the cement and water will react. So what they did was they built an enclosure that was bigger than whatever concrete piece they wanted to pour.

So any time we were pouring concrete, like these columns behind us, they were wrapped with an enclosure that was about three feet bigger than it was on either side, double layers of high-density plastic to keep the wind from blowing out so you didn’t lose the heat loss, and the heaters blowing heat from the bottom.

FRED DE SAM LAZARO: At the core of each column was placed a steel skeleton, the concrete around it serving as a skin.

TOM DEHAVEN: We have thousands and thousands of miles, like, 7,500 miles of high-strength cables in it, as well. That steel actually holds up the bridge, and the concrete protects it. So it’s like the skin on your body is the concrete, but the thing that really holds it up is the bones inside, the steel.

FRED DE SAM LAZARO: And just under the skin is embedded a kind of fiber-optic nervous system.

DAN SJOGREN, Construction Worker: I’m installing a telerock maturity meter. It monitors the temperature and strength gain of the concrete based on a time-temperature scale. I put this in the pourage. It’s one of the ways we manage the concrete as it cures.

FRED DE SAM LAZARO: In all, about 320 sensors will monitor every aspect of the bridge’s operation, how the loads are borne and distributed, and whether corrosive de-icing chemicals used in the winter are seeping in.

Kevin Gutknecht is a spokesman for Minnesota’s Transportation Department.

All of this is designed to help us monitor the health of this bridge, as well as the University of Minnesota and a university out of Florida are monitoring this data, as well, and they’re teaching young engineers, so it will help us design bridges in the future.

I think all the instrumentation in there will hopefully help us learn better how these types of structures behave. And so that when they’re designed, maybe we can design them even more cost-effectively.

Effective design and its costs

FRED DE SAM LAZARO: University of Minnesota civil engineering Professor Carol Shield says the bridge’s design is not new. However, having it monitored or instrumented from day one will provide valuable new and ongoing information about how these structures age.

CAROL SHIELD, University of Minnesota: We don’t really have the ability to run huge computer codes and model every little part of every structure we build, because we build one of them.

It’s unlike the airline industry where you’re building a airplane, and you’re going to build a thousand of them, and so you can spend a lot of time really analyzing to death every little part of it. A bridge you get to build one of.

And so we make a lot of assumption and approximations along the way. And what instrumenting the bridge has let us do is try to understand whether a lot of those assumptions are good assumptions or bad assumptions.

And I think all the instrumentation in there will hopefully help us learn better how these types of structures behave. And so that when they’re designed, maybe we can design them even more cost-effectively.

FRED DE SAM LAZARO: Costs for this bridge seemed no object. In fact, two bidders who came in lower are suing the state, alleging a flawed process.

But for the state, speed was at a premium. In fact, Flatiron-Manson stands to get a $27 million incentive bonus for finishing early.

Minnesota’s Department of Transportation says the bonus payment to the contractor for the accelerated timeline is well worth it. The department says, for every day that this roadway is closed, it costs the regional economy at least $400,000.

The new I-35 bridge opens first thing Thursday morning to an anticipated 140,000 Minneapolis commuters every day.

GWEN IFILL: Again, also on our Web site, you can see our coverage from last year about the collapse of the I-35 bridge in Minneapolis. Visit us at PBS.org and click on NewsHour Reports.