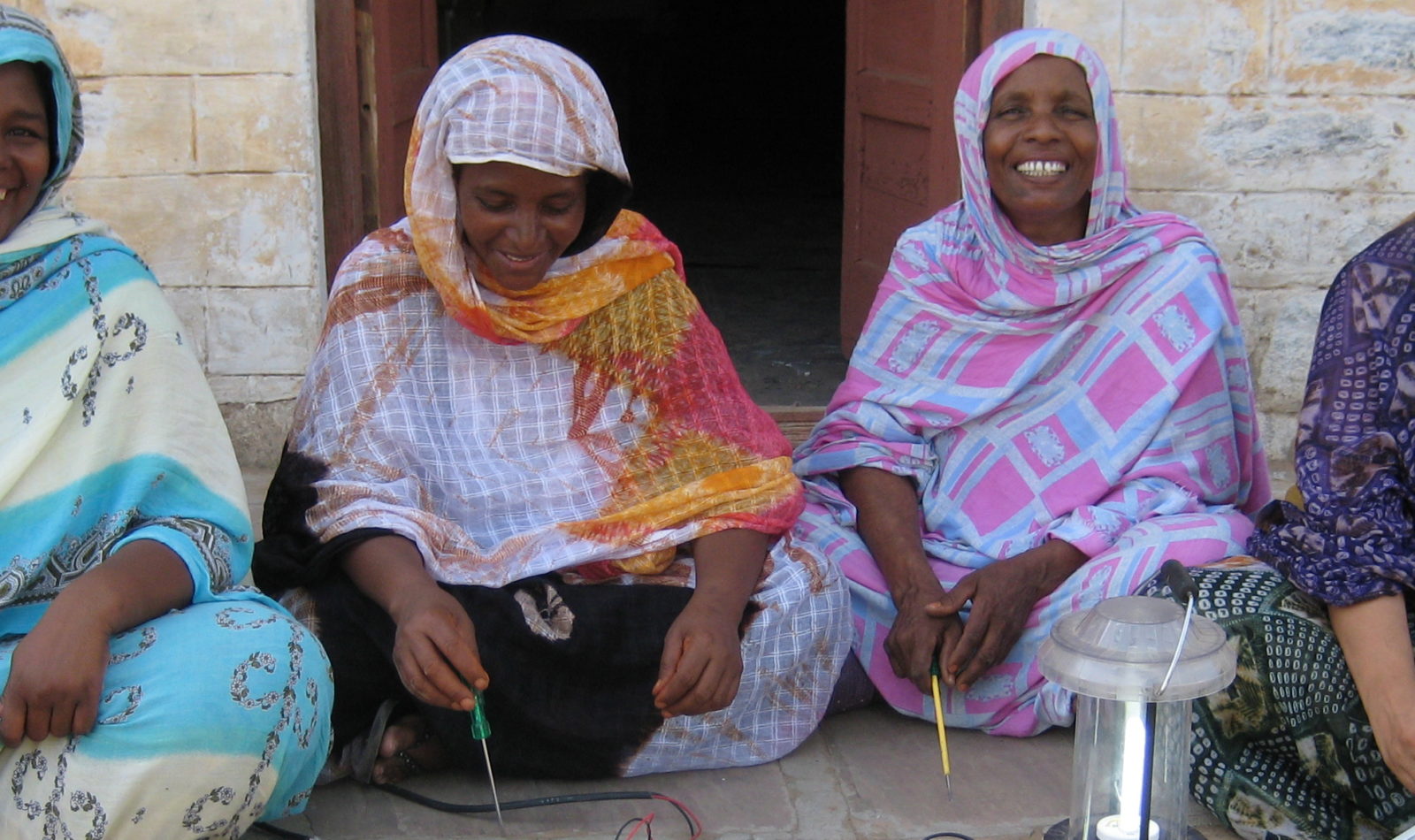 FRED DE SAM LAZARO, NewsHour Correspondent: The students are mostly women. Some are grandmothers. Hundreds have come here from villages across India and a dozen other countries to learn how to install and maintain solar energy systems in rural areas.

Even though it’s sophisticated coursework, the only prerequisite for admission to the Barefoot College is that there are no prerequisites, not even to speak the language.

Until we arrived with a translator, these Mauritanian women, who’d been here four months, hadn’t spoken to anyone else in their native Arabic. But the college’s founder says language is not a barrier to learning.

BUNKER ROY, Founder, Barefoot College: Our job is to show how it is possible to take an illiterate woman and make her into an engineer in six months and show that she can solar-electrify a village.

It began with basics, like finding safe drinking water, then a few years later, solar.

BUNKER ROY: In 1986, no one ever thought of solar electrification. It was far too expensive. But today we have 50 kilowatts of panels on our roofs. All our 20, 30 computers, electronic machines, telephone exchange all works off solar.

FRED DE SAM LAZARO: Today, solar energy drives not just the equipment, but a larger social experiment to improve the lives of some of the world’s poorest people.

It begins in the classroom, run by instructors who themselves have little or no formal education. Instruction is delivered with a mix of body language, a few essential terms in English, and a lot of hands-on practice.

The students create an illustrated manual they’ll take home. It’s the closest thing to a diploma certifying their training as solar technicians.

But just coming here is an unlikely achievement for students like 56-year-old Sarka Mussara, a widowed grandmother. She’d never attended school before, never even left her village in the West African nation of Mauritania.

SARKA MUSSARA, Student (through translator): At first, we did not even have a passport. We started little by little learning the solar energy system. Day by day and little by little, we were able to put things together.

FRED DE SAM LAZARO: Roy was educated at elite schools, on a path to medicine or diplomatic service, before he founded the Barefoot College. The idea of self-reliant learning was inspired by Mahatma Gandhi, also by a legendary American.

BUNKER ROY: Well, it’s Mark Twain who said, “Never let school interfere with your education.” School is something that you learn, reading and writing. Education is what you learn from the family, from the environment, from the community.

FRED DE SAM LAZARO: Using grants from the U.N. and private foundations, Bunker Roy travels extensively in developing countries, seeking potential students. The ones he does not want are city dwellers and, unless they’re physically handicapped, men.

BUNKER ROY: We’ve come to the sad conclusion men are untrainable. They expect too much. They are restless. If they’re young, they’re impatient. The first thing they ask, even before the training starts is, do I get a certificate? They will use that certificate to get the worst job possible in a city, whereas, if we take middle-aged grandmothers to be trained, I don’t have that problem of migration.

SARKA MUSSARA (through translator): When women work, there’s at least food and something to drink, to take care of the family. And we can even get our hair done with the extra money. But when a man works, maybe he’ll bring home money, and maybe he won’t.

BUNKER ROY (through translator): How many houses are in the town?

FRED DE SAM LAZARO: Their villages in Mauritania, like much of the rural developing world, are not electrified.

WOMAN STUDENT (through translator): May God reward you for what you have done, because those people did not have any light, and now they will have light.

FRED DE SAM LAZARO: And these women will have an income, installing and maintaining solar systems. They are a common sight in villages near the Barefoot campus, replacing dirtier and more expensively fueled lanterns.

BUNKER ROY: We said they should pay as much as you pay today for kerosene, for wood, for batteries, for torches, for candles, it comes to about $5 a month. They’re willing to pay $5 a month for the use of the solar light.

FRED DE SAM LAZARO: Solar has opened new opportunities for work and study, especially for girls. In both the majority Hindu and minority Muslim communities here, girls have traditionally been restricted to household chores.

So we started the night schools of Tilonia in 1975, purely from the point of view of attracting more girls who graze cattle in the morning to come to school at night.

FRED DE SAM LAZARO: Today some 7,000 children attend night school here and across rural north India. In song, these girls plead to their parents to allow them to study, to delay marriage until they turn the legal age of 18, a law that’s frequently ignored in rural society.

PUPPETEER (through translator): OK, eight and five make how much?

FRED DE SAM LAZARO: Entertainment programs promote the Barefoot College and encourage children to attend school. There have also been campaigns to promote public health and accountability from government officials.

The solar cookers made at the Barefoot College are a simple but precisely engineered contraption. These mirrors track, then capture the sun’s energy and direct it to a cooker, which really cooks.

For Sita Devi, who has only a second-grade education, working on the cookers means she can hope for more for her baby girl.

SITA DEVI, Solar Technician (through translator): My daughter must be educated. She will be able to do things, to progress so much faster than I can because of going to school more.

For me, for example, it takes so much more time to measure out three centimeters when I’m welding here, whereas someone who is educated could do it in no time.

SHAHNAZ BANU, Solar Technician (through translator): In our village, in our community, women were not allowed outside the house. My husband was reluctant, but I said, if we stay behind the veil, we won’t have anything to eat. Some people object to women working. But if we can add income to the household, that’s a good thing, isn’t it?

FRED DE SAM LAZARO: Roy says a key to sustaining rural jobs and development is to use technology that can be managed by the local community, like solar lanterns, and technology that’s familiar, like rainwater collectors.

That was an idea developed by a rural architect who could neither read or write who designed the Barefoot College’s green campus.

The foundation of everything Roy does is decentralization. It’s a departure from the typical approach of aid agencies, which he says want to bring big infrastructure and ideas created by outside experts.

FRED DE SAM LAZARO: So far, the Barefoot College has solar-electrified some 350 villages across India and dozens more in sub-Saharan Africa and even war-torn Afghanistan.
JIM LEHRER: You can learn more about Barefoot College and similar projects in social entrepreneurship on our Web site. Just go to PBS.org, and then scroll down to NewsHour Reports.

The Barefoot College in northern India teaches women skills to bring solar power to their villages and to manage the energy system in rural areas. A report on the philosophy behind the school and its unusual approach to empowering women.