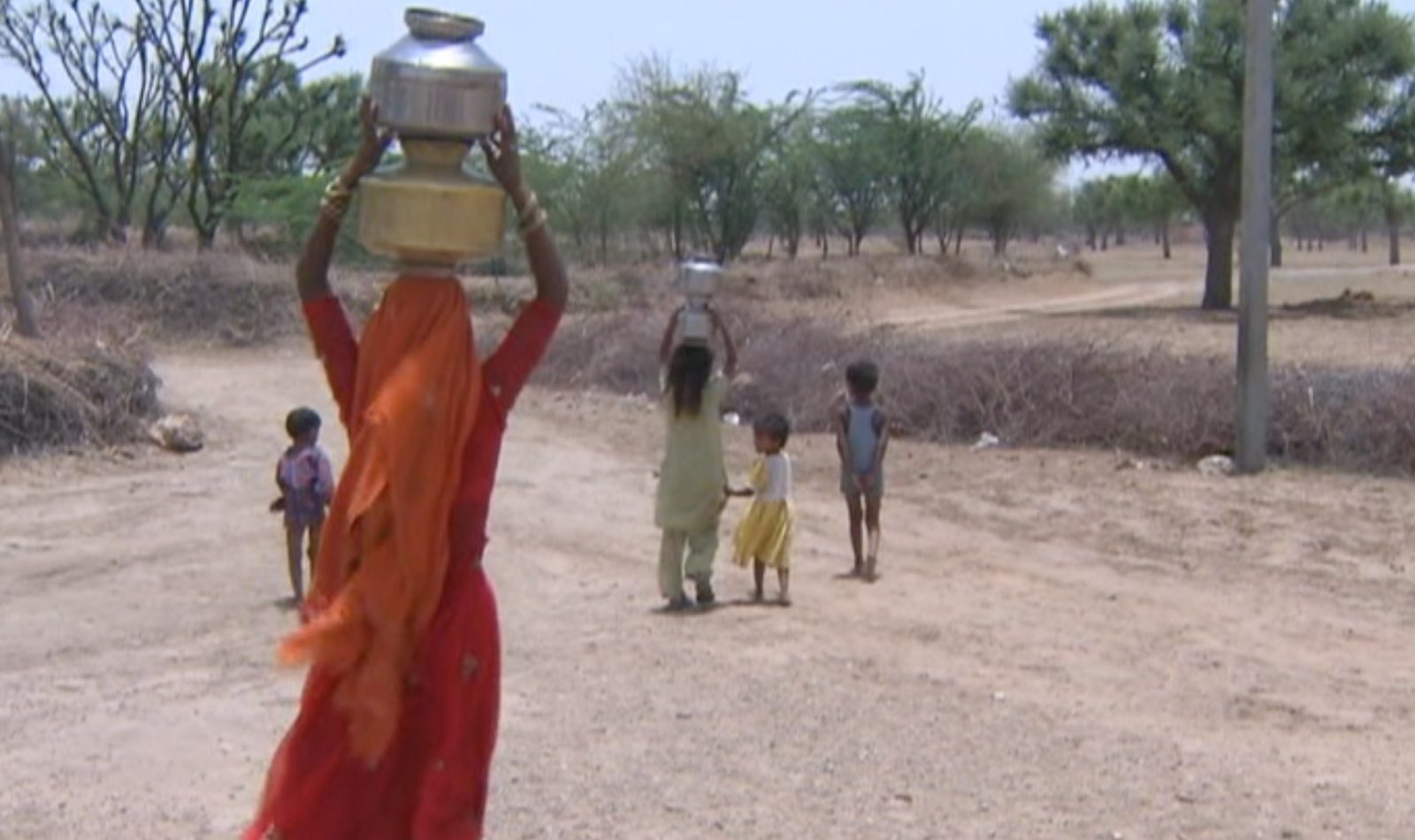 FRED DE SAM LAZARO, NewsHour Correspondent: This is one of 49 factories that make Coca-Cola drinks across India. The company has invested over $1 billion dollars building a market for its products in this country, but Coca-Cola’s welcome has been less than effervescent, particularly around this factory in Kala Dera, in the arid and recently drought-stricken state of Rajasthan.

The plant used about 900,000 liters of water last year, about a third of it for the soft drinks, the rest to clean bottles and machinery. It is drawn from wells at the plant but also from aquifers Coca-Cola shares with neighboring farmers. The water is virtually free to all users.

These farmers say their problems began after the Coca-Cola factory arrived in 1999.

RAMESHWAR PRASAD, Farmer (through translator): Before, the water level was descending by about one foot per year. Now it’s 10 feet every year. We have a 3.5-horsepower motor. We cannot cope. They have a 50-horsepower pump.

RAM SAPAT, Farmer (through translator): Every day, a thousand vehicles come out of that factory taking away our water. What is left for our kids?

FRED DE SAM LAZARO: To irrigate their fields of barley, millet and peanuts, these growers complain they must now drill deeper and use heftier pumps to water their fields.

MANGAL CHAND YADAV, Farmer (through translator): I’ve had to drill three times. It’s down to 260 feet. Five years ago, it was 180 feet.

HARI MICHAN YOGI, Farmer (through translator): It’s because everyone has a submersible pump now, the Coca-Cola factory. There’s not enough rain. These are the reasons.

FRED DE SAM LAZARO: Their cause was picked up by activists, like Rajendra Singh. He has worked across the region helping villagers conserve and collect rainwater through traditional methods.

FRED DE SAM LAZARO: The farmers also got the attention of international activists, according to Siddharth Varadarajan, an editor with the newspaper The Hindu.

SIDDHARTH VARADARAJAN, Newspaper Editor: Activist groups have been quite effective and have managed to tap into anti-globalization and environmental and green groups across the world and have, you know, therefore, I think, managed to put Coke on the defensive internationally, to a much greater extent than has happened within India.

FRED DE SAM LAZARO: In 2005, when the University of Michigan banned Coke products, the company responded, and the ban was then lifted.

Coca-Cola agreed to an independent third-party assessment of some of its operations in India. That report determined that this plant in Rajasthan is contributing to a worsening water situation. It recommended that the company bring water in from outside the area or shut the factory down. Coca-Cola rejected that recommendation.

Already in 2004, Coca-Cola shut down one factory in south India amid a similar controversy. Its response now doesn’t surprise Varadarajan.

SIDDHARTH VARADARAJAN: Clearly, if Coke were to give in one factory, as other communities essentially look at the experience of Rajasthan, it’s quite likely that there would be a cascading effect. So I suspect Coke will dig its heels in.

FRED DE SAM LAZARO: For his part, Coca-Cola’s India head, Atul Singh, says it would be irresponsible to leave.

ATUL SINGH, President, Coca-Cola India: You know, walking away is the easiest thing we can do. That’s not going to help that community build sustainability.

FRED DE SAM LAZARO: So Coca-Cola, while insisting its impact on the water supply was minimal, said it would stay and help.

The company has agreed to subsidize one-third of the cost of water-efficient drip irrigation systems for 15 neighboring farmers. The government pays most of the rest; growers themselves must chip in 10 percent.

Coca-Cola has also set up concrete collection systems for rainwater. Typically about 70 percent of rainfall evaporates before it can seep into the ground. Water collected from rooftops is piped into shafts up to 150 feet deep. Despite drought conditions, the system has been a success, according to company spokesman Kalyan Ranjan.

KALYAN RANJAN, Coca-Cola Spokesman: We have still managed to recharge banks than what we withdraw, so what we see ourselves is we are part of a problem-solving mechanism rather than a problem in ourselves.

FRED DE SAM LAZARO: The scientist who conducted the independent study of Coca-Cola’s operations is not ready to accept that claim. Dr. Leena Srivastava is with the Delhi-based Energy and Resources Institute.

LEENA SRIVASTAVA, Scientist: We haven’t been able to prove that. And it’s too short a timeframe to start talking about whether groundwater aquifers have been recharged in six months. I think we really have to wait and watch and see what the impact is.

RAJENDRA SINGH (through translator): They have an arrogance that says, “We have money; we can buy what we want.”

FRED DE SAM LAZARO: They also are critical of the government locally for attracting Coca-Cola to a water-scarce region and nationally for ignoring water policy in a rush to attract industry and foreign investment. Editor Varadarajan says they have a point.

SIDDHARTH VARADARAJAN: India has a completely irrational groundwater management policy, where, if you have the means and the resources, you can extract as much groundwater as you like and you can use this water which you essentially pump up for free — it’s unmetered — to manufacture products which you can sell for a high price, whether it’s bottled water, whether it’s a beverage, whether it’s industry.

And, you know, this is something which the Indian policymakers have simply not bothered to formulate a cohesive strategy to deal with.

LEENA SRIVASTAVA: We are heading very rapidly towards the situation of absolute scarcity. Without even adding on the problems that might come up because of climate change issues, we just don’t have enough. And food security in the future can become a major problem for the country.

FRED DE SAM LAZARO: Based on the water scarcity?

LEENA SRIVASTAVA: Based on water scarcity.

FRED DE SAM LAZARO: In June, India’s prime minister proposed a series of measures to address broader climate change issues, including water. As for Coca-Cola, CEO Singh says, by the end of 2009, the company will become, quote, “water-neutral,” returning at least as much groundwater as it withdraws in India overall, though not necessarily at individual plants like Kala Dera.

He says it’s part of an emerging sense of corporate social responsibility.

ATUL SINGH: You know, I think the world has changed. If you’d asked me this question 10, 15, 20 years ago, I would give you a different answer.

Today, what I have seen — and this is globally, as well as in India — corporates have moved from philanthropy — you know, cutting a check for the art, you know, some art museum or some religious temple or, you know, helping a particular foundation — into real sustainability.

Are we building sustainable communities? And if we are not, consumers will choose products and services from companies who do behave in that manner.

FRED DE SAM LAZARO: He says Coca-Cola plans to invest several hundred million more dollars in the years ahead in what may soon become its largest market.

In the Indian state of Rajasthsan, farmers have accused Coca-Cola factories of drawing too heavily on the area’s water supplies and contributing to pollution. Fred de Sam Lazaro reports on the controversy and the claims of both the company and its critics.