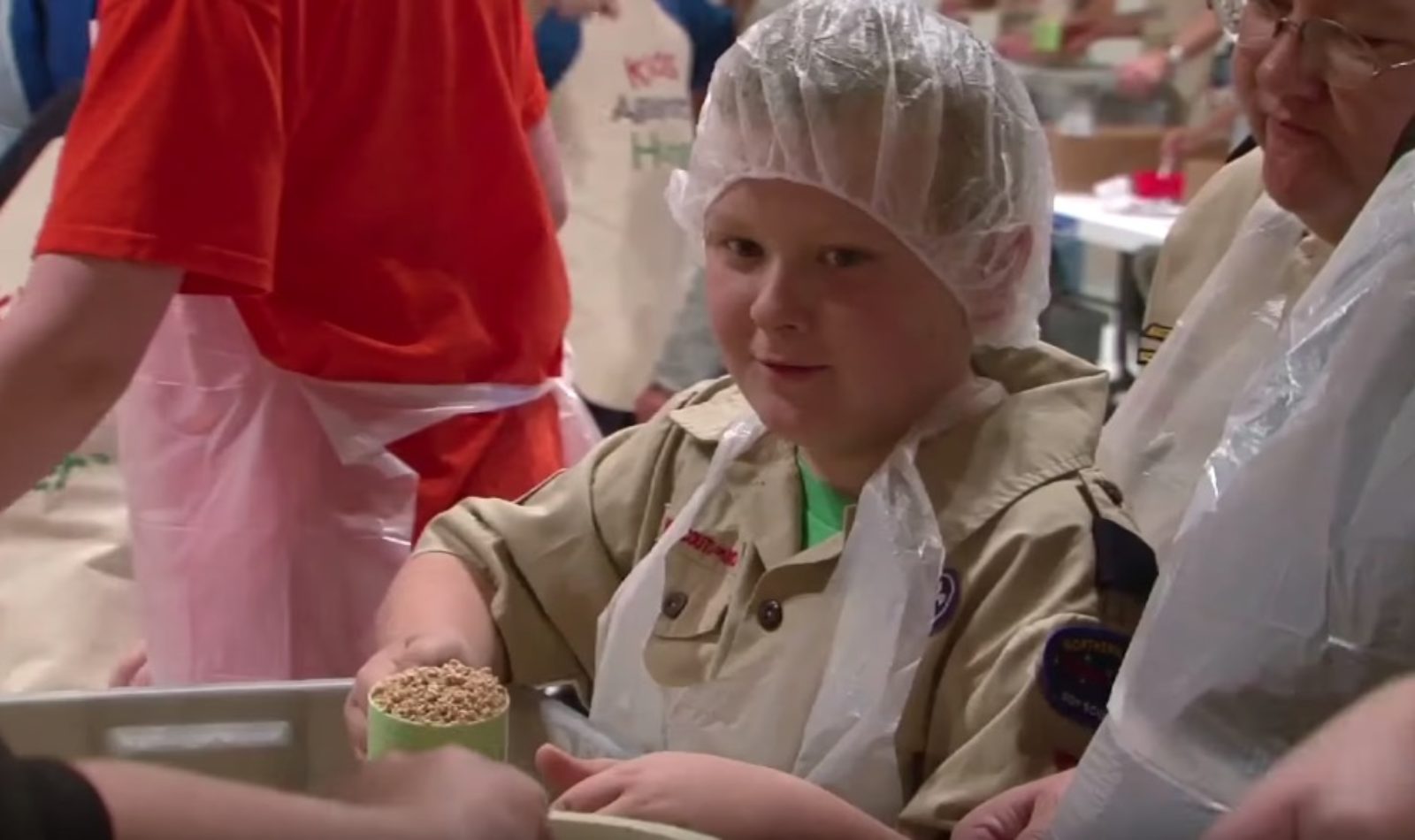 A report on one man’s effort to alleviate the crisis in Haiti.
Play Story
Subscribe to Stories

FRED DE SAM LAZARO: Each weekday morning, in this missionary school in rural Haiti, the gates open to a stampede of small feet.

The kids come in for what will likely be their only substantial meal of the day.

A few quietly save a portion, usually for a younger sibling who could not get here.

In Haiti, anywhere from 25 percent to 40 percent of children suffer chronic malnutrition.

Occasionally, an adult, like Emma Marisu, is invited in. She was taking the first steps to heal her 2-year-old twins, their bodies swollen and emaciated by hunger.

Another occasional visitor at these mealtimes is a 79-year-old social entrepreneur from Minnesota who is responsible for the food on these tables.

Richard Proudfit’s Kids Against Hunger will deliver 40 million meals this year and, he hopes, 80 million next year in 38 countries. The ABC of good learning is a good meal, he says.

RICHARD PROUDFIT, founder, Kids Against Hunger: God has called me to do — feed starving children. I have to do that first. And then, when we activate their body, then they can learn to do other things.

FRED DE SAM LAZARO: His calling came long before he retired from a successful business career, long before a stroke that can distort his speech.

It all began in 1974, when he volunteered in Honduras after Hurricane Fifi.

RICHARD PROUDFIT: The children, they were literally dying all around me. And the mother was carrying, and they were dying right in their arms. And I said, I have to come back to Minnesota, and see what can I do.

In the beginning, he bought wholesale quantities of things typically found on American grocery shelves, like Twinkies and granola.

RICHARD PROUDFIT: I took 15 tons of food to India, and my kids were throwing up on me, because it was too powerful.

They were coming from zero, way up. So, I went I met with Cargill, they said, calm it down, and it will accept the children over all the world.

FRED DE SAM LAZARO: So, finding the right diet took a lot of trial and error, then?

FRED DE SAM LAZARO: Three years working with food companies to hit the formula that satisfies all religious dictates and nutritional needs around the world. Each meal has 52 percent protein from soy, six vegetables and 21 minerals and vitamins, all mixed with rice, the world’s most widely accepted staple.

RICHARD PROUDFIT: I met with other countries — or companies, and I said, what do we need in India? They need Vitamin A. I went to Philippines. They need magnesium — magnesium, calcium, and coppers.

Then I went to Honduras. They need folic acid. I said, wait a minute. I can’t have a menu of every country. I said, throw it all in.

FRED DE SAM LAZARO: It’s not just the food, but the design of the entire program that is key to its success.

DAWN DRESSER: Do we have any kids in here that are under second grade? If we do, we need them to go over to child care.

FRED DE SAM LAZARO: Anyone second grade on up can volunteer.

DAWN DRESSER: We started out with a goal of half-a-million meals. We have bypassed that. And our new goal is a million meals.

So — and because we’re doing a million meals, it also — it changed the price per meal. So, we’re down to 13 cents a meal.

MAN: First thing we’re going to do is put in some of the vegetable. Put a full scoop — full scoop of this in there. That, you want to level off. We just — that’s why we have got two spoons in that one. Yes, perfect. The rice waits last.

WOMAN: Because I just can see those kids — my kids in those kids. It makes me sad.

MAN: Something simple that does a whole lot of good. And it shows the importance of working together and doing something good for more than just yourself.

BOY: It feels good when you can pack food for people who never get to have any every day, and people like us that we take food for granted.

FRED DE SAM LAZARO: Like the packaging, funding is small-scale. Most contributions are from volunteers and the church community.

Now Pastor Steve Dornbusch is confident they will raise the $130,000 for one million meals.

REV. STEVE DORNBUSCH, Calvary Lutheran Church of Golden Valley: I don’t know. I have been here almost 12 years, and I don’t remember us doing anything that has so excited this number of people to be a part of it, and to feel like we’re really making a difference in the world.

WOMAN: One, two, at least bag.

FRED DE SAM LAZARO: The idea has caught on. Today, Kids Against Hunger has helped 30 church groups and clubs like the Kiwanis set up satellite locations in 18 states. They have attracted some 80,000 volunteers.

Michael Lloyd, who runs its day-to-day affairs, says Kids Against Hunger’s role is as a logistical link between good intentions here and hungry children there.

MICHAEL LLOYD, Kids Against Hunger: Well, we provide them all the support, how much ingredients to order for how many meals they want to package, what equipment they need and so on. So, we help them distribute the food.

So, we have corrections in over 40 countries. And if they’re looking for an outlet for their food, an NGO to distribute it through, we tried to help them with that service as well.

FRED DE SAM LAZARO: Kids Against Hunger has also established connections with the U.S. military, so international shipping costs, often a major expense, are minimized. On this day, the Coast Guard vessel Tampa on patrol in the Caribbean, delivered a load in the Haitian capital, Port-au-Prince.

MAN: It’s fantastic, what you guys are doing, really.

FRED DE SAM LAZARO: These meals were destined to help kids at the church center like Emma Marisu’s twins.

FRED DE SAM LAZARO: At age 2, each child weighs barely 20 pounds, about half of what they should be. It will take weeks to restore them to health with steady nutrition. But many children who have been on the Kids Against Hunger meals show marked improvement quickly.

ADAM WHITE, feeding program administrator: Within 10 days, she has gained five pounds in weight. And she’s — I mean, as you can tell, she is still malnourished, but a few days ago, she didn’t have a smile on her face, and now she does.

FRED DE SAM LAZARO: The smile, like progress on malnutrition in Haiti, is slow to come.

RICHARD PROUDFIT’s optimism that he will soon reach every hungry child, optimism expressed with biblical zeal and fable.

RICHARD PROUDFIT: It’s passion of going to my Nineveh, OK? I have to go there, because if I don’t, I’m going to wind up in the belly of a fish. (LAUGHTER)

RICHARD PROUDFIT: I love God for — because every children in the world is God’s children.

FRED DE SAM LAZARO: He wants to feed them all someday. More likely, he will make next year’s goal, to double the number of meals delivered by Kids Against Hunger.

As global food prices continue to rise, hunger in Haiti has fueled food riots and driven much of the population, including many children, to the brink of starvation. Correspondent Fred de Sam Lazaro reports on one man’s effort to alleviate the crisis.