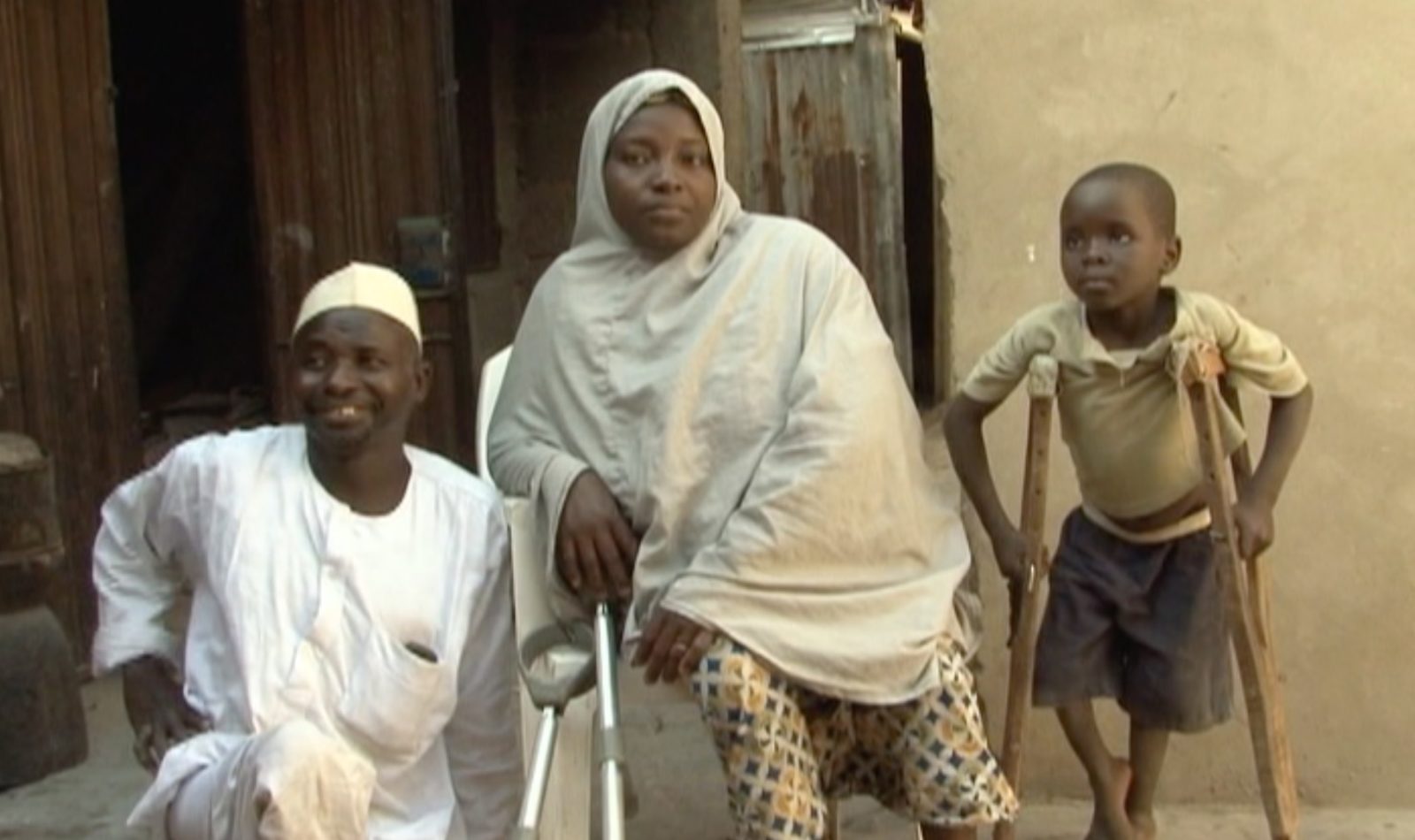 FRED DE SAM LAZARO, NewsHour Correspondent: For as long as he’s walked, 48-year-old Aminu Ahmed Twada has walked on his hands. His lower limbs are withered by polio. He lives in one of the last places on Earth still threatened by the disease.

But Twada’s is a story of success against daunting odds. He has a thriving business in tricycles used by the handicapped. But he has a much grimmer message that he tries to get across to parents as he coaxes them to immunize their kids.

AMINU AHMED TWADA (through translator): I will tell them, “Do you want your son to be like me? Look at me. I am a polio victim. I cannot join police. I cannot join army. I cannot even join football.”

FRED DE SAM LAZARO: Polio is spread mainly through poor hygiene and sanitation, problems in so much of the developing world, but it is easily prevented with a course of oral vaccines discovered decades ago which wiped out polio in the United States.

In 1989, a campaign was launched to eradicate it worldwide. When the campaign began about two decades ago, polio claimed 350,000 victims, spread across 125 countries. Today, that number is down to less than 2,000, and polio is endemic in just four countries: India, Pakistan, Afghanistan, and here in Nigeria.

And only in Nigeria is the situation getting worse.

FAIZA GIDADO (through translator): Normally we do infrared for them. That is a treatment over here which will warm the place and thereby increase blood supply to the area. We also do electrical stimulation by stimulating the muscles, the weak muscles.

FRED DE SAM LAZARO: The campaign against polio in Nigeria had been making progress, but about five years ago it began to run into opposition which started in some mosques in this conservative, predominantly Muslim region.

In 2003, not long after the U.S. invaded Iraq, a rumor took hold around Kano that the polio campaign was, in fact, a U.S.-led conspiracy against Muslims, that the vaccine would cause the children to become infertile. That rumor mill spread enough fear that several regional governments in northern Nigeria suspended their vaccination campaigns for as long as 13 months.

We could not find any religious leaders willing to talk now about their opposition to the vaccine campaign. But Ibrahim el Khalid, an Islamic scholar, says African history is filled with injustices that make it easy to stir up suspicion and anxiety here.

IBRAHIM EL KHALID, Islamic Scholar (through translator): Even some doctors, even some scholars, some educationists, they believe it, so that’s what brings all the problems.

FRED DE SAM LAZARO: So people thought it was a plot by the American government, to sterilize children?

IBRAHIM EL KHALID (through translator): Yes. You know politics, how it is. They think America does not like Muslims.

FRED DE SAM LAZARO: The campaign had to regroup, says Dr. Stephen Blount. He’s with the U.S. Centers for Disease Control, a partner with several U.N. and private agencies and foundations in the immunization drive.

DR. STEPHEN BLOUNT, U.S. Centers for Disease Control: We listen carefully to their concerns, took members of that community to see how the tests were done. And, in fact, I think the vaccines here were actually produced in Indonesia, a Muslim country. And so that was an important step in counteracting some of the fear and increasing the acceptance at the level of the religious leaders.

FRED DE SAM LAZARO: Now the vaccination campaign is again in full swing. Village by village, it begins with a town crier announcing the arrival of a vaccination team, urging parents to bring the young children in.

Along with the oral polio vaccine, the children are also given a shot for measles, which still kills hundreds of children each year in Nigeria.

Even with the blessings of religious leaders, experts say the campaign falls short in critical areas. For example, among frontline workers, most employed by local governments, there’s often inadequate training, equipment and motivation.

Jonathan Majiyagbe is with Rotary International, one of the polio campaign sponsors.

JONATHAN MAJIYAGBE, Rotary International: Are vaccinators able to reach the houses? When they reach the houses, do they get all the people in the house? Some people give us results that they’ve been to houses when the truth is that they probably have not been there.

FRED DE SAM LAZARO: And sometimes they get to a house too late. Two-year-old Saria Â developed a fever, then got progressively worse, say her parents, Abdul and Hassana Muhammed.

HASSANA MUHAMMED (through translator): About four days ago, her legs stopped moving. She was walking before. She’s able to sit up, but she can no longer move.

FRED DE SAM LAZARO: They rented the regional public health facility, which alerted the polio campaign. While they awaited tests to confirm the disease, Saria’s parents were instructed to massage the child’s lower body with hot compresses. Until now, they knew nothing about polio.

HASSANA MUHAMMED (through translator): Never heard anything. We’ve never been to the hospital or anything like that.

FRED DE SAM LAZARO: At the core of the problem is an underfunded, uncoordinated public health system, one that suffered from neglect over the very same decades that Nigeria’s revenues as one of the world’s top oil exporters have grown.

DR. MUHAMMAD ALI PATE: For primary care in particular, we have 774 local governments. The coordination was not optimal.

FRED DE SAM LAZARO: Dr. Muhammad Ali Pate recently returned after years of training and working in the U.S. He was invited by Nigeria’s government to repair a broken system. He runs into people with more immediate medical needs and says they wonder why there’s so much fuss over polio prevention.

DR. MUHAMMAD ALI PATE: It is something that we have to work to explain to make sure that communities understand the value that this is a disease that can be prevented, to actually let them feel this is something that is only a part, and that in the medium to longer term we need to rebuild primary health care system so it’s able to deliver not only polio vaccines, but measles vaccines, maternal health services, as well as just basic care package.

FRED DE SAM LAZARO: The CDC’s Dr. Blount says rebuilding the primary care system will take something that’s been absent from much of recent history.

DR. STEPHEN BLOUNT: The key issue here and elsewhere is political commitment. The leaders of this country have to demonstrate not only their occasional interest, but their ongoing interest. And by that I mean holding accountable the officials that report to them on making progress. We’re seeing some more of that happen. That’s the next key step.

FRED DE SAM LAZARO: Polio campaigners in northern Nigeria say their next step is to convince everyone that the vaccine is needed.

FRED DE SAM LAZARO: They still find people who believe the vaccine harms kids. It’s particularly painful for Rotary’s Majiyagbe. Until 2005, he was the global president of Rotary, which has raised almost $1 billion to eradicate polio.

JONATHAN MAJIYAGBE: It breaks my heart. I mean, I also expected that, thank God, during my time as president, we would finish this job. And that was the very moment in my own home state that the exercise was temporarily paralyzed.

FRED DE SAM LAZARO: And for countless children, the paralysis will be lifelong. Aminu Twada and his wife, Hadissa, who’s also a childhood polio victim, say they waited anxiously for months during the suspended campaign before polio vaccines were once again made available.

But it was too late for your boy?

FATHER: Yes, got the disease, too late for my boy.

FRED DE SAM LAZARO: Tragically, their six-year-old son, Umar, was infected, a victim as much of political squabbling and official neglect as polio.

Polio continues to be a major medical problem in Nigeria where suspicions about vaccines and other issues have revived the crippling disease. Fred de Sam Lazaro reports from Nigeria on efforts to curb the polio problem.