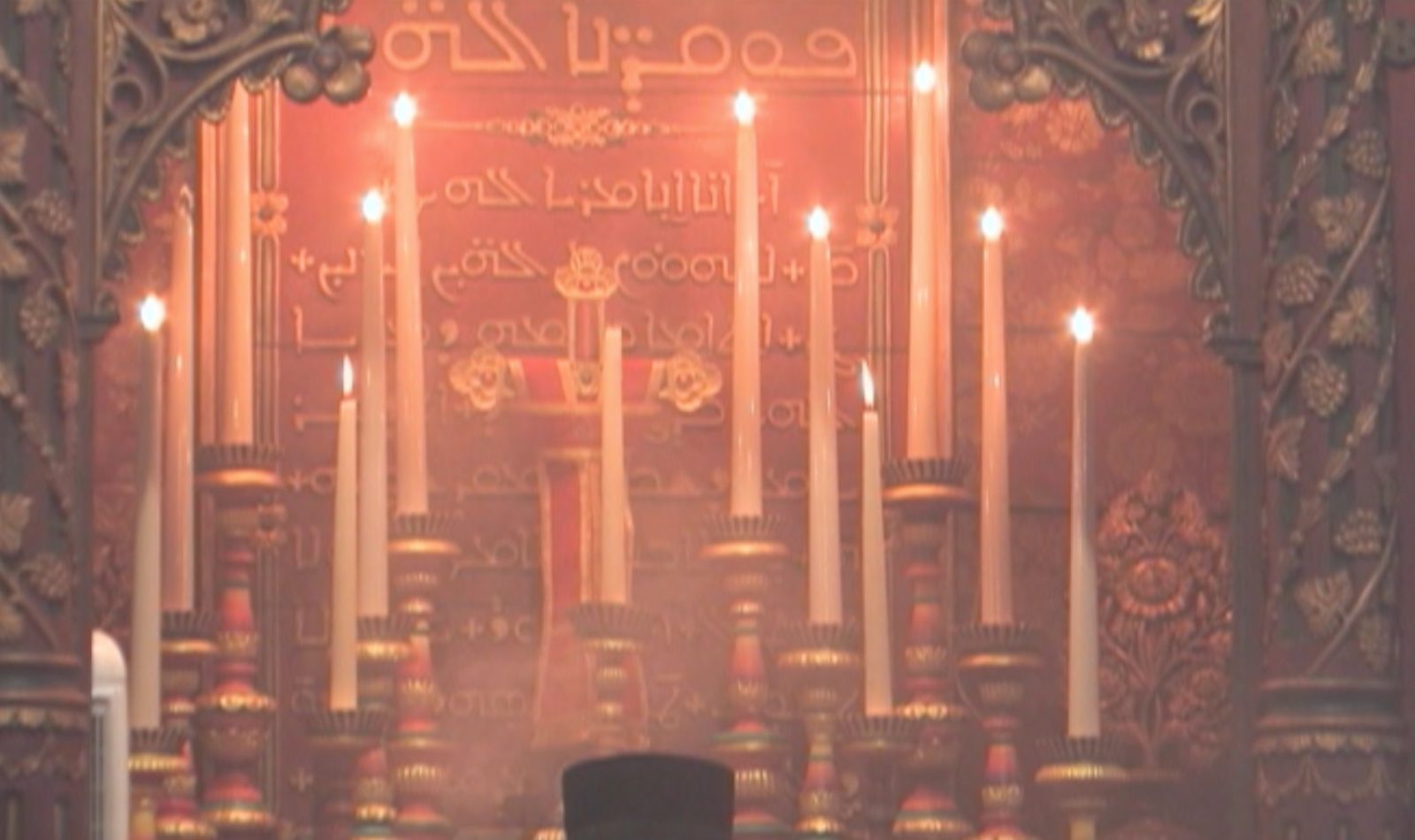 FRED DE SAM LAZARO: St. John’s Abbey in Minnesota may be best known in the world of biblical manuscripts for its illuminated, hand-written Bible.

DE SAM LAZARO: But also here, in the subterranean Hill Museum and Manuscript Library, is one of the most extensive records of sacred texts from around the world.

Reverend STEWART: This project of preserving manuscripts photographically was started out of our Benedictine tradition of being guardians of culture. The monasteries have been places where texts particularly have been treasured.

DE SAM LAZARO: Father Columba Stewart’s quest to record church history, to fill in its blanks, has taken him to the farthest trails of early Christianity — Lebanon, Turkey, Iraq and, perhaps the least well-known destination, Kerala, a province in southwestern India where he recently brought a delegation of his museum’s benefactors.

Rev. STEWART: We got to India through the Middle East, and of course that’s how Christianity got to India in the first place. There’s an assumption that there were no Christians in India until the Western missionaries brought the Gospel to this land of pagans, and that’s not the truth at all.

DE SAM LAZARO: Long before it reached many parts of Europe, Christianity came across the Arabian Sea to Kerala along the thriving spice trade routes. Today about seven million people, a fifth of Kerala’s population, call themselves St. Thomas Christians after Jesus’ apostle, who many here believe arrived in India in 52 A.D. Even today, parts of some liturgies are sung in Syriac, close to the Aramaic language spoken by Christ.

Professor ISTVAN PERCZEL (Department of Medieval Studies, CEU): They claim to have been converted by St. Thomas the Apostle. This we cannot prove either or disprove. But from the, I don’t know, third, perhaps fourth century onwards we have testimony to their existence here.

Prof. PERCZEL (looking at manuscript): Hmmm. We have never seen this.

Prof. PERCZEL (pointing at page in manuscript): Can we come back to digitize this?

DE SAM LAZARO: Most of these go back only as far as the beginning of colonization around the 15th century, when the first European colonists — the Portuguese — arrived to find both spices and the St. Thomas Christians who, they discovered, were a distant branch of Middle Eastern Orthodox churches

Rev. STEWART: By their lights, viewing it through the lens of the 15th- and 16th-century European perspective, these people were heretics. They were concerned that their liturgies and their other writings be purified and corrected on the basis of what a Portuguese Latin-Rite Roman Catholic would expect to be normative. So there is very, very little manuscript evidence from before the Portuguese era, because the Portuguese were very good at collecting these manuscripts that they’d already found, destroying them, and issuing corrected copies of them.

Reverend IGNATIUS PAYYAPPILLY (Director, Catholic Art Museum of the Archdiocese of Ernakulam-Angamaly, India): This is the oldest Syriac manuscript which I have here in these archives. It is written in 1563.

Rev. STEWART: It’s a Syriac manuscript, but there’s a Latin note that this manuscript belonged to the Carmelites, and it’s interesting that they write it in Latin. It, again, tells you something about the religious situation.

DE SAM LAZARO: Latin or Roman Catholic were introduced or imposed on the St. Thomas Christians, though Syriac continued in use in their liturgies. But many outlawed rites survived, as did factions that resisted pledging loyalty to a Syriac patriarch instead of the pope. Scribes from Kerala were later sent to the Middle East to recover texts destroyed by the Portuguese. The only surviving copies of many are now in Kerala.

Rev. STEWART: Those are treasures, because we can find manuscripts that may have disappeared in Middle Eastern libraries, some collections of East Syrian canon law, for example, preserved in unique manuscripts in Kerala, which haven’t survived because of the later persecution of these Christians in the Middle East in the 19th and 20th centuries.

DE SAM LAZARO: The Kerala church, meanwhile, has seen schisms both between and within the Western and Eastern branches. But through it all the St. Thomas Christians have maintained a distinctly Indian — that is non-European — character.

Rev. PAYYAPILLY: We are Christians in faith, and we are Indian in citizenship, and we are Hindus in culture.

Rev. PAYYAPILLY: See the halo of Jesus around his head, Jesus, and see the long ears and his hair. These are all typical resemblance of the statue of Buddha.

DE SAM LAZARO: Although the Western scholars first came in search of Syriac manuscripts, they’ve also discovered a rich local history inscribed on palm leaves and in Malayalam, the local language, and tongues that preceded it. Much of it is everyday church accounts and records. Valuable history to scholars — just clutter to most priests in the local churches

SUSAN THOMAS (Church Scholar): And most of these palm leaves were, you know, either put in somewhere where you have them exposed to termites and mice, or just put up with the logs and water wells or the waste material. Sometimes they burn it up.

DE SAM LAZARO: The palm leaves reveal a community that could serve as a model of interfaith harmony in a larger region that’s often seen sectarian violence. The churches employed Hindu scribes, for example, and bishops enjoyed warm relations with the local kings who reigned in the area

Rev. PAYYAPILLY: I have seen here in these archives a beautiful document written by the bishop — handwritten together with the printed one — requesting all the churches belonging to the Cochin Kingdom — they should celebrate the 60th birthday of the king.

Rev. PAYYAPILLY: Yes, the king is a Hindu…and they have to say special mass, solemn high mass for the longevity of this king.

DE SAM LAZARO: There’s still much to be analyzed, much to be discovered. All of it will be digitized — rescued from moisture, termites, and neglect and stored here for scholars and for posterity. There will also be back-up copies in an unlikely safe haven: a monastery in central Minnesota.

For RELIGION & ETHICS NEWSWEEKLY, this is Fred de Sam Lazaro.

In southern India, in Kerala, there are millions of people known as St. Thomas Christians. Their ancestors, many believe, were converted by the Apostle Thomas in the first century. Portuguese missionaries later destroyed most of the ancient church writings, replacing them with their own. But now Benedictine monks at St. John’s Abbey in Minnesota are rediscovering the surviving texts.