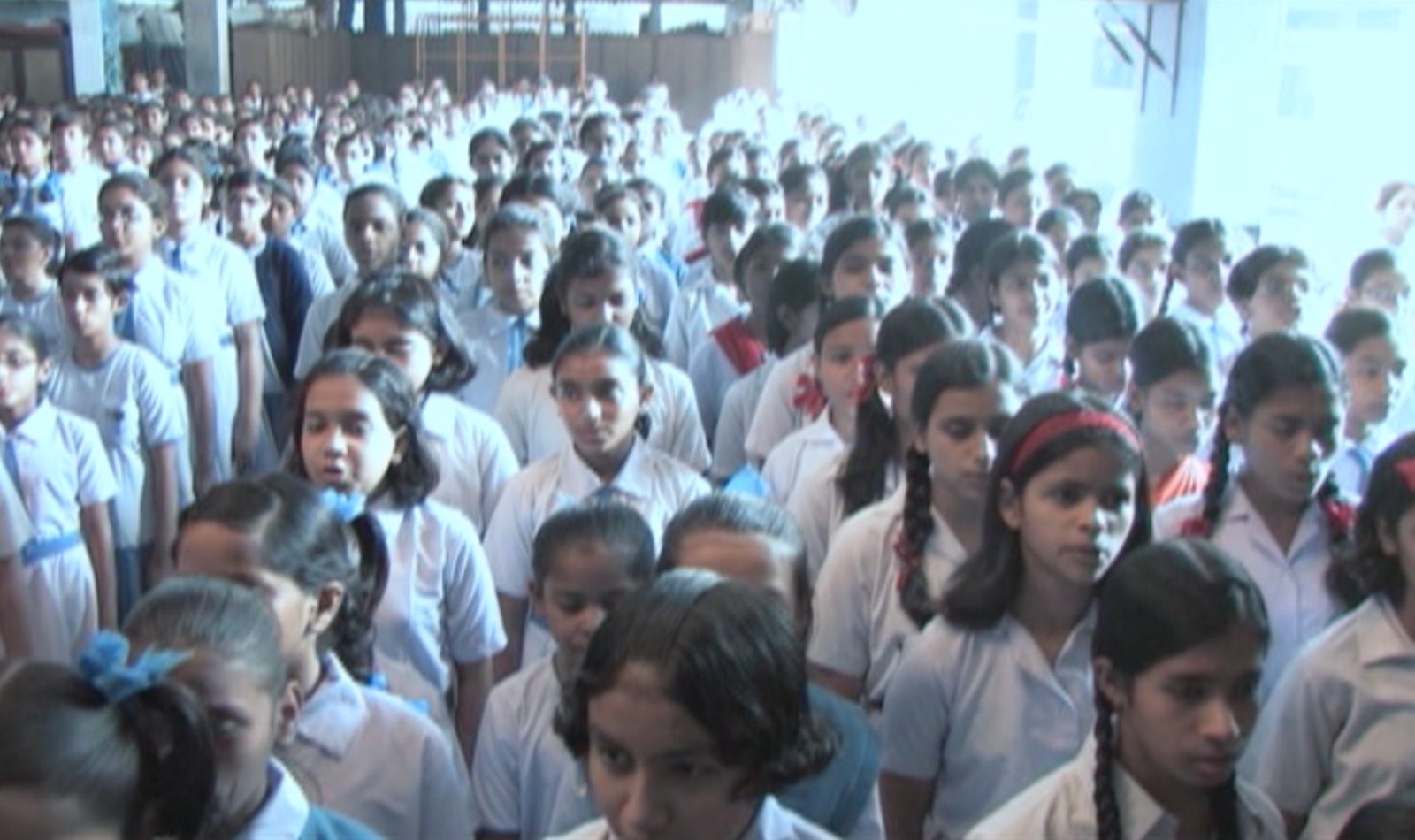 The Nun of Kolkata

FRED DE SAM LAZARO, NewsHour correspondent: With her habit, her whistle, she’s the sergeant of this morning drill, in many ways the old-fashioned parochial school principal who can strike terror in encounters like this…

SISTER CYRIL MOONEY: Are you aware that you tried to cheat?

SISTER CYRIL MOONEY: So now say to me, “Yes, Sister, I’m very sorry. I did cheat.”

YOUNG FEMALE STUDENT: Yes, Sister, I am very sorry. I did cheat.

SISTER CYRIL MOONEY: You did cheat, right? Look at the tears. Are you sorry? OK. It shouldn’t happen again, all right? Once the tears come, you know that the contrition is there, you know?

SISTER CYRIL MOONEY: She won’t do it again. None of them ever do it a second time when they’re caught.

FRED DE SAM LAZARO: Sister Cyril Mooney has transformed the lives of thousands of children in this school and across the city of Calcutta.

She grew up in Ireland, where she joined the Loreto Order and went to India in 1956. She got a PhD in zoology and began teaching in the elite English-language Loreto schools begun during colonial days.

But she found the quiet, comfortable life discomforting.

SISTER CYRIL MOONEY: I was appalled by the poverty almost outside our gate.

FRED DE SAM LAZARO: So when she took over this school in 1979, this social entrepreneur cut in half the number of traditional fee-paying students, forgoing revenues for things one might find in elite schools, like a swimming pool. The uniform hasn’t changed, but today 50 percent of these students — most from the slums — attend for free.

In 1983, Sister Cyril reached beyond the slums to an even lower rung of poverty: street children. Their families live on the sidewalks, rural migrants who must leave their children to fend for themselves as they look for work as laborers.

For these kids, the Loreto doors are always open to come in for a meal or a bath. They’re never forced to stay. The children must decide on their own if it’s better here than on the street, where many have learned to survive.

SISTER CYRIL MOONEY: I went over to meet someone off the station, and this little one ran up to me with a cup of tea. She told me, “I make my living by picking people’s pockets. But I only pick what I need.” Now, what do you do with a child like that? What? Eight years of age. I mean, unless we can do something better, why should we take away their survival skills?

FRED DE SAM LAZARO: Survival skills or not, street children are vulnerable to being trafficked into the sex trade. So the Loreto Day School has become a night shelter, called the Rainbow Program, where about 250 girls study, play, eat, and sleep. The school’s roof terrace has been converted into a dormitory.

The next morning, the children of judges and doctors mingle with those of rag pickers, their lives intertwined on purpose. Every so-called regular student is required to spend at least two hours a week tutoring a Rainbow child.

Not only have social barriers fallen, Sister Cyril says, but the students have become advocates for change. They volunteer to teach in rural areas, and they’ve tackled the pervasive use of domestic child labor in middle-class homes.

SISTER CYRIL MOONEY: It’s against the law to employ a child below the age of 18, but many of these children are passed off as relations up from the village, so nobody can catch the employers.

But our children who live next door to them and are the same social standing — parents — as the employers of these, they go and they fight with the employers, and they get out these children to come and play, and they identify them. Now they brought them in for a camp, a medical camp.

Children form dreams of their own

FRED DE SAM LAZARO: On this day, several busloads of young domestics were brought in for routine health check-ups.

I see children here who look they’re not even 10 years old, Sister.

Saloni is a third-grader, brought here four years ago by a Loreto alumna who noticed she was being abused by her employers.

SALONI KHATUN: One day I was wiping, and they were not in the home. She took me here.

FRED DE SAM LAZARO: She took you from the home?

FRED DE SAM LAZARO: What were you wiping? The wall?

FRED DE SAM LAZARO: So you were wiping the floor, and this girl came and got you?

FRED DE SAM LAZARO: What would you like to be when you grow up?

FRED DE SAM LAZARO: Air hostess? What do they do?

SALONI KHATUN: For helping others.

FRED DE SAM LAZARO: Helping others, whether on an airplane or on the streets, is a common refrain. Teresa Shah, an 11th-grader, was brought here when she was three by her mother, who still lives under a sidewalk tarp. She plans to go to college, then work, and says she’ll share her wages with Loreto and with her family.

TERESA SHAH: After my studies I’ll find a job, then I’ll earn something, and first earnings I want to give it to Sister, because this is the place where everything is for us.

SISTER CYRIL MOONEY: My hope is that every child who comes out will have a better future, and I think the next generation will have a very good future.

Breaking the cycle of poverty

FRED DE SAM LAZARO: But how to break the cycle of endless need in a city of 15 million and growing? Sister Cyril’s approach can be found in classes that train so-called barefoot teachers. Most are women with some formal education nominated by their communities to come here for a six-week course. They come from rural areas or Calcutta’s burgeoning slums, where they return to teach.

This community near Calcutta’s eastern bypass road is sandwiched between railroad tracks and a lake now being filled to make way for a metro station. It’s populated mostly by rural migrants desperately seeking work in a city that long ago ran out of room.

But this slum now has a school. Teacher Jharna Naskar, trained at Loreto, says it was a top priority for parents here.

JHARNA NASKAR, teacher (through translator): I’ve seen these children roaming around here. They were in such bad conditions, dirty conditions. Now they’re here, learning some songs, some classroom exercises. Also, they’re learning about health and hygiene.

FRED DE SAM LAZARO: Jharna Naskar is one of 7,000 barefoot teachers trained by Sister Cyril, an achievement that has not gone unnoticed.

FRED DE SAM LAZARO: In 2007, India’s government recognized her with one of the country’s highest civilian honors, rarely bestowed on foreigners.

SISTER CYRIL MOONEY: I ask myself, what are you here for? Are you here to produce agents of human change among your children? Are you here to change the mental set of people? So even if you do it with a small number, it spreads.

After all, Mahatma Gandhi was only one man. He managed to get the might of the British Empire out of India, which is something quite fantastic. I mean, we can do it if all of us will work together.

FRED DE SAM LAZARO: It all began here, but today some 350,000 children across Calcutta are off the streets and sitting in some form of classroom.

A place to learn and sleep

Sister Cyril Mooney, principal of the Loreto Day School in Kolkata, India, is working to provide poor children a place to learn by day and a safe haven at night. Fred de Sam Lazaro reports.