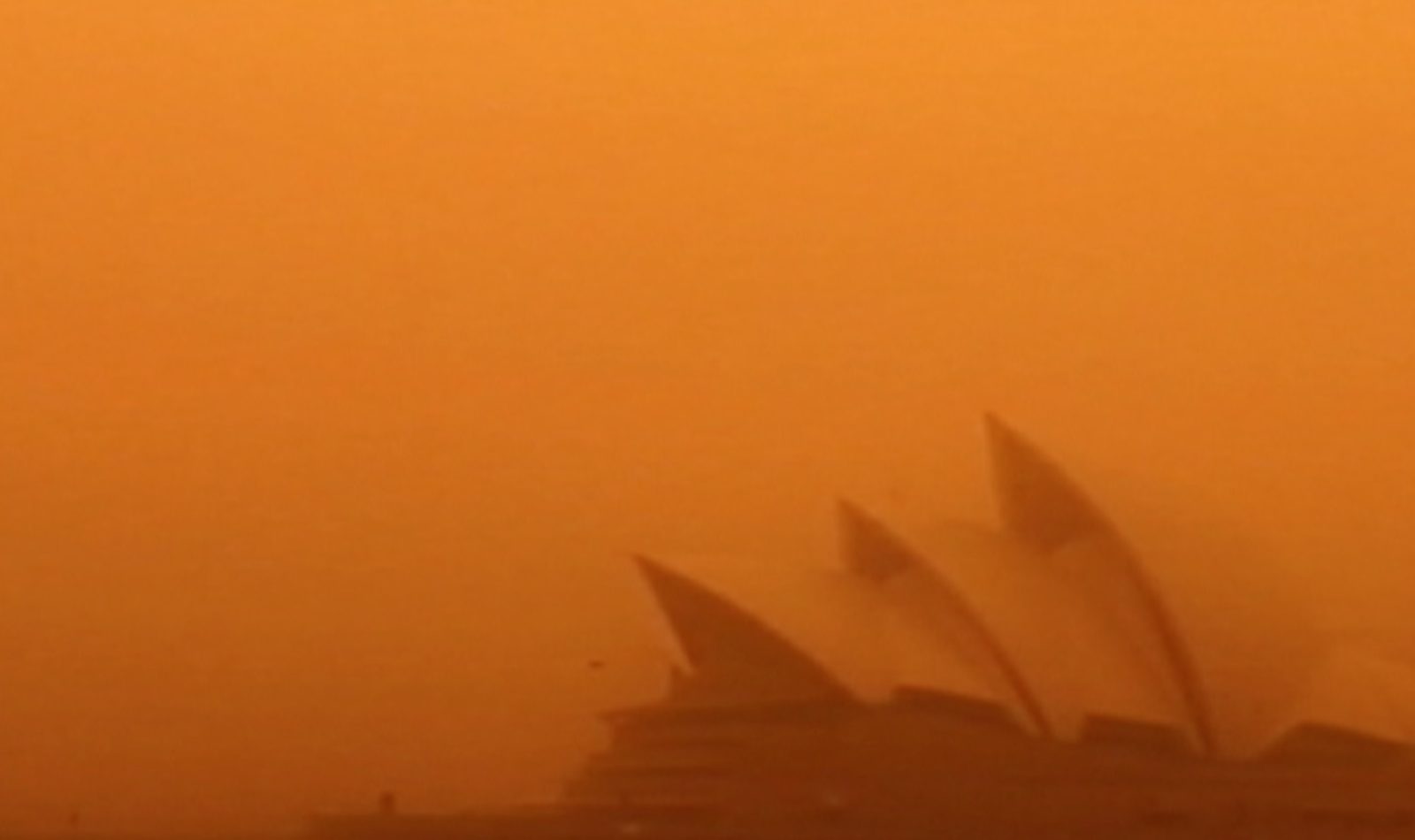 The Drought Down Under

JIM LEHRER: Next tonight: another in our ongoing series about food. Special correspondent Fred de Sam Lazaro reports on the record drought in Australia.

FRED DE SAM LAZARO: The dust storms that blanketed Sydney in September were a vivid reminder of the drought gripping Australia, imperiling the livelihood of farmers and food exports this country and the world depend on. The eight-year dry spell has convinced many Australians that it’s a signal of permanent climate change here.

The epicenter is a huge agricultural area in southeastern Australia known as the Murray-Darling Basin, an area the size of France and Germany combined, named for Australia’s two main rivers. Lake Boga, where fish, birds and water sport once thrived, has been bone-dry for almost two years.

Ian Mason used to earn most of his income farming rice. Once a half-billion-dollar export crop, it has now virtually collapsed. He’s had to switch entirely to wheat, a staple with strong global demand, but its return has been mixed, at best. This field here once had rice in it?

IAN MASON, farmer: That’s right. It’s set up. It wouldn’t have seen rice in this paddock for probably eight to 10 years.

FRED DE SAM LAZARO: And wheat, which is a hardier, less thirsty crop, is also struggling?

IAN MASON: Yes, that’s right, because we just haven’t had any rainfall. It’s already started to die off from the bottom.

FRED DE SAM LAZARO: More than direct rainfall, farmers like Mason rely on an extensive network of dams and canals first built during the Great Depression. It brought water and prosperity, and, out of an arid plain, spawned a food industry larger than California’s. Farmers were lured by the promise of a reliable supply of water. They bought land and signed their farms onto the network by purchasing water rights. These entitlements added stress to the river system, but farmers like Ian Mason say they were taken for granted, until the water stopped coming. This year, Mason got 9 percent of his allocation. It’s still better than last year and the year before, when he got no water from the canal system — zero. And the evidence of irrigation and no irrigation is plain to see here.

FRED DE SAM LAZARO: He spent his limited allocation to irrigate a part of his wheat crop. So, you can see the sharp contrast between the two soils.

FRED DE SAM LAZARO: And the crop with some future must find a new buyer. He had been selling it to neighbors who own a dairy farm. Ideally, you would sell this wheat to the McPhees, so that they can mix it with their silage and feed it to their dairy cows?

FRED DE SAM LAZARO: But normal hasn’t happened in a long time for Mason and his neighbors, Graham and Jane McPhee. They have decided to sell most of their prized cows.

FRED DE SAM LAZARO: The McPhees’ fortunes have declined steadily, in tandem with their water allocation in recent years.

JANE MCPHEE: The last few seasons, we have never had 100 percent entitlement. They have taken it back to sort of 82 percent, and then 64 percent, and I think last year around 3 percent. Is that right?

GRAHAM MCPHEE, dairy farmer: That was the first time in three years we actually got an allocation. So…

FRED DE SAM LAZARO: Facing mounting debts and market vagaries that have pushed milk prices lower, the McPhees had to sell one of their last bankable assets, hoping to buy some more time. You have gone from one season to the next now for several, saying it’s got to end now, it’s got to end now. And it hasn’t. Have you visited the — the ugly scenario in which it doesn’t end next season? And — and what then?

GRAHAM MCPHEE: I don’t know, either that, or bloody stupid, one of the two.

FRED DE SAM LAZARO: What farmers are is stoic, reluctant to seek help, says Andrew Gregory. He is with a government agency that runs the drought bus, a traveling one-stop shop for various assistance programs. Farmers weren’t coming into the office, so the office went to them.

ANDREW GREGORY, Australian Government Drought Assistance: Farmers, in general, are very proud people, and this was a factor that we needed to address. So, we had these reports in the media of some horrific numbers of farmers taking their lives. We realized that we need to take the service out to the farming communities. FRED DE SAM LAZARO: He says some 27,000 farmers have popped into the mobile centers. Among various programs are grants equal to about $125,000 U.S. to get out of irrigated farming.

TONY BURKE, Australian Minister for Agriculture, Fisheries and Forestry: We are in the front line of feeling the impact of climate change. And, as it’s gone on, it’s started to become, what’s the impact then on the family? And that’s having a very real bearing on some of the difficult decisions that they have got to make about their own futures.

FRED DE SAM LAZARO: Tony Burke is Australia’s minister for agriculture, fisheries and forestry. The government has earmarked some $5 billion to improve the efficiency of farmers and the irrigation system itself, for example, lining canals to prevent seepage. It has also a $2.5 billion program to buy back water allocations from farmers, hoping to lessen the stress on the rivers and streams.

Ross Nicol’s 700-cow dairy offers an early glimpse. Water is carefully measured before being released by a computerized system of floodgates.

ROSS NICOL, dairy farmer: Every drop of our farm is retained on the farm, so it’s getting recycled.

FRED DE SAM LAZARO: His pastures are hardier grasses that use less water. The fields are leveled by laser technology, so water flows evenly, with no puddles.

FRED DE SAM LAZARO: Probes measure the moisture content in the soil, helping determine how much water is needed.

ROSS NICOL: We have obviously got to run the business with less water. So, I guess a direct reflection of that is, when there’s less water available, the cost of that water goes up, so is it viable to use water at that price?

FRED DE SAM LAZARO: To survive, farmers will have to adopt new technology, use much less water, and look for market opportunities in crops that yield more profit on less water.

Mark Howden is an expert on climate change and agriculture.

MARK HOWDEN, climatologist: What we have already seen is water rights and water licenses moving from low-value uses, so, for example, from producing pasture for dairy cattle, through — and moving into areas such as fruit-growers or vineyards, where there’s a lot higher economic return per use of any given amount of water.

FRED DE SAM LAZARO: But, Howden says, the total amount of water will never return to what it has been, thanks to climate changes caused by greenhouse gases. He says Australia’s recent extremes, tropical storms and deadly bushfires, are beyond normal weather cycles. Ag Minister Burke agrees.

TONY BURKE: For those who hoped we were just in a normal cycle that was dipping a little bit lower than previously, it’s not that. We need to be smarter than we have ever been before. That means we need to adapt to the new climate. We need to never turn our back on research and development.

IAN MASON: I’m a firm believer that what we’re seeing is climate variability, that we — that it has happened before. There’s been prolonged droughts. I mean, I have no doubt that it will rain again. I certainly don’t subscribe to the view that it will never rain again. It’s just how we then prepare ourselves for the — if it’s going to happen again, you know, or when the next drought happens.

FRED DE SAM LAZARO: The key question is whether farmers can hang on until the next sustained rain happens. Longer-term, the question is whether Australia can remain a major food provider, amid growing demand in a world whose population will reach nine billion by 2050.

JIM LEHRER: Fred has also reported on the challenges posed by climate change in India and Nigeria. You can watch those stories on our Web site, NewsHour.PBS.org.