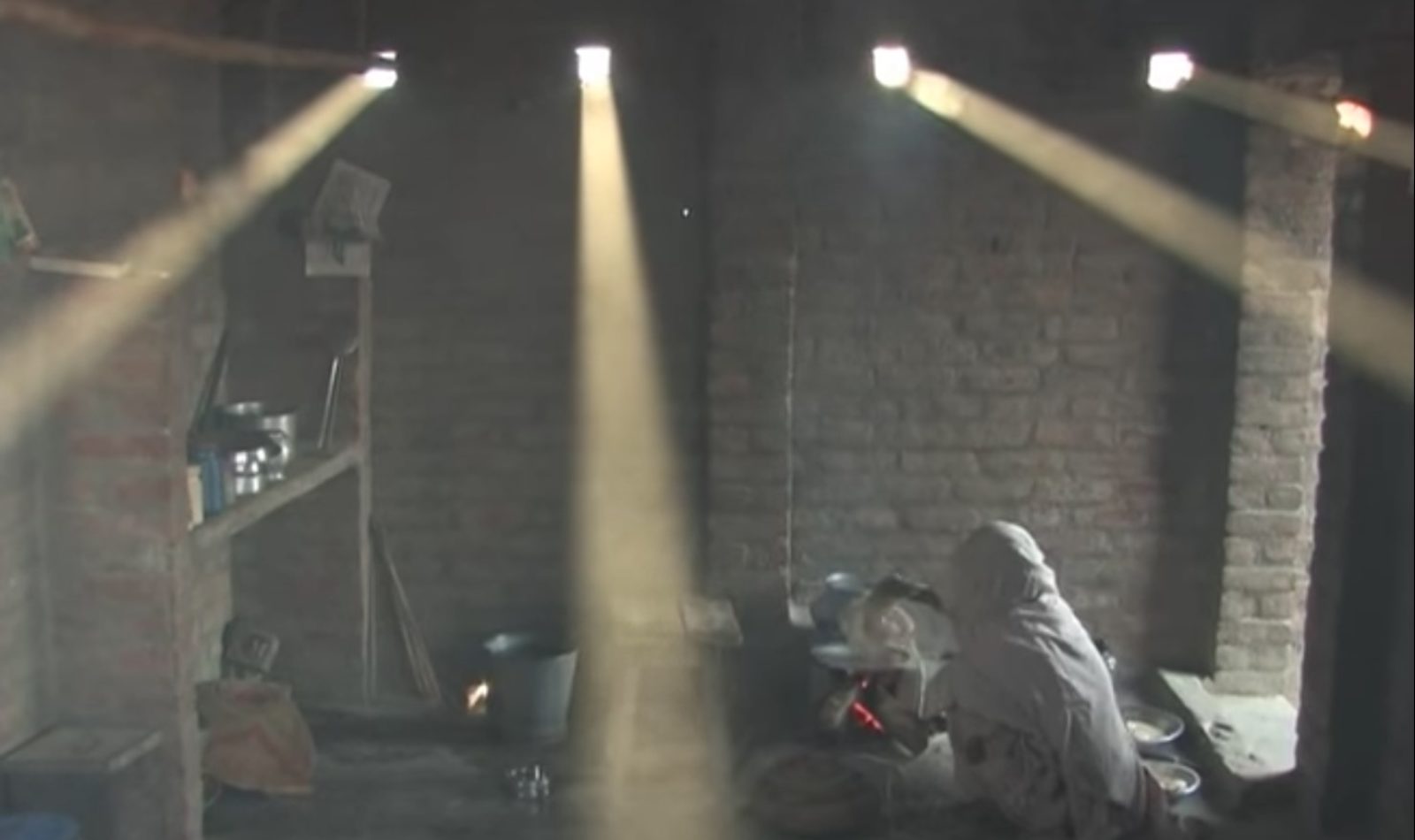 FRED DE SAM LAZARO: It is sunny most mornings in Khairatpur, but you can hardly tell, at least not until some time after everyone’s had breakfast. That’s because here and in millions of villages in the developing world, food is cooked with wood or cow dung. The soot or black carbon from incomplete combustion causes not only lung disease, but global warming, says climatologist V. Ramanathan, who is with the Scripps Institution at the University of California, San Diego.

V. RAMANATHAN: And this is being done by over three billion people in the world, not because they want to destroy their environment. They have no access to other types of fuels.

FRED DE SAM LAZARO: He says reducing black carbon will immediately slow global warming. Cleaning up diesel engines is one way to do this, but Ramanathan is focused on cleaner cooking.

He’s doing an experiment. With U.N. and private grants, his Surya project is handing out cleaner-burning stoves to 15,000 households in and around Khairatpur. They use biofuels, but have a solar-charged internal fan to burn more efficiently.

FRED DE SAM LAZARO: Over the next two years, the team will measure what the cleaner stoves do for air quality, hoping to make a strong case for scaling up this idea.

V. RAMANATHAN: The preliminary data shows, if you replace the current way of cooking, we should see a dramatic impact, first on the health, second on the air quality, and hopefully on regional climate.

FRED DE SAM LAZARO: Ramanathan’s call to reduce black carbon is supported in a recent U.S. government report. Some advocates wanted this issue on the agenda of the Copenhagen climate summit.

But there are skeptics. Rajendra Pachauri, chair of the Nobel Prize-winning Intergovernmental Panel on Climate Change, says we don’t yet know enough about black carbon. And he says there’s no quick climate dividend. Getting billions of people to abruptly change the way they cook just isn’t practical.

RAJENDRA K. PACHAURI: If one uses that argument, I would say that running faster trains in North America and providing public transit in a city like Houston is a so much more logical solution than people driving gas-guzzling cars and SUVs. So, you know, these things are not decided by merely back-of-the-envelope calculations. If you ask people to give up driving their cars, you have to change mind-sets. You have got to change values.

FRED DE SAM LAZARO: Despite his skepticism on the climate question, Pachauri’s Delhi-based Energy and Research Institute has partnered with Ramanathan, since he has no argument on the health issue.

KALPANA BALAKRISHNAN: Just to give you a comparison value, many indoor settings in developed countries that do not have this particular source of particulates are in the range of 25 to 50 micrograms, no more than that. In a typical unimproved rural household, you could be as high as an order of magnitude more, 400 to 500 micrograms per meter cubed 24 hours.

MAN: So to adjust the flame, you turn this button here.

FRED DE SAM LAZARO: It’s one thing to give away a few thousand stoves, but how to get them into another 120 million households in a vast, diverse nation? A freebie, especially one using unfamiliar or finicky technology, will quickly begin to gather dust. What’s needed are commercial enterprises, a so-called market value chain, says Hafeezur Rehman, who is one of the scientists on the Surya project.

HAFEEZUR REHMAN: The commercial players will have to invest substantially in building that rural value chain, market value chain, which would be so essential, not only for delivery of the technology, but also for its maintenance, upkeep, spares, all the other things that go with it.

FRED DE SAM LAZARO: A nonprofit group called Envirofit, backed by the Shell oil company’s foundation, thinks it has a market-based plan that could be a model. In a handful of rural markets, it has persuaded retailers to carry Envirofit stoves, which they can sell and service for a profit — the next challenge, getting customers to buy, marketing.

HARISH ANCHAN, Envirofit India: If you look at rural India, what message reaches to the consumer there in the rural? I mean, the newspapers do not reach. Televisions would be — there would be penetration of television, but it would be remarkably low.

So, when you want to do a communication of the benefits of the stoves or awareness of the indoor air pollution, it has to be a video on wheels or a van on wheels which goes from village to village, demonstrating the stove.

FRED DE SAM LAZARO: Envirofit holds demonstrations of its stove models, a patented design made at its Colorado headquarters that sells for around 25 U.S. dollars. They also provide entertainment, with games, with song and drama.

HARISH ANCHAN: The man of family buys a television, and he buys a bike, and then he buys a mobile phone. And you have the lady who keeps on saying that you’re going into modern age. You’re getting all these particular gadgets. But look at the kitchen, which is the main heart of the entire household. And we’re still having the same traditional cook stoves and that gives out fumes and is less efficient.

WOMAN: Does it leave charcoal?

MAN: No. All the wood is burned to ashes. All the energy is absorbed. The nearest dealer is written here on the side.

FRED DE SAM LAZARO: These women seemed sold as they took their brochures home. One thing they would like is financing.

WOMAN: If that’s available, we would buy them right away.

FRED DE SAM LAZARO: Envirofit is working to get microloans to make the purchases easier. The goal is a million stove sales by 2011.

Epidemiologist Balakrishnan, who is studying indoor air and stove design, says none of the current models achieve emission standards that the World Health Organization calls healthy. But, even though they’re not the cleanest, they are cleaner, she says, and, most importantly, they have sensitized people to pollution that many rural Indians used to accept as a fact of life.

KALPANA BALAKRISHNAN: Many people, if you go to the rural areas, appreciate the fact that they have a less smoky stove. I think the best shouldn’t be the enemy of the good.

FRED DE SAM LAZARO: Definitive study results on the effects of black carbon are expected in two years. And climatologist Ramanathan says, they will determine whether cleaner cook stoves can not only help lower people’s exposure to toxic soot, but also help slow global warming.

Black Carbon in the Home