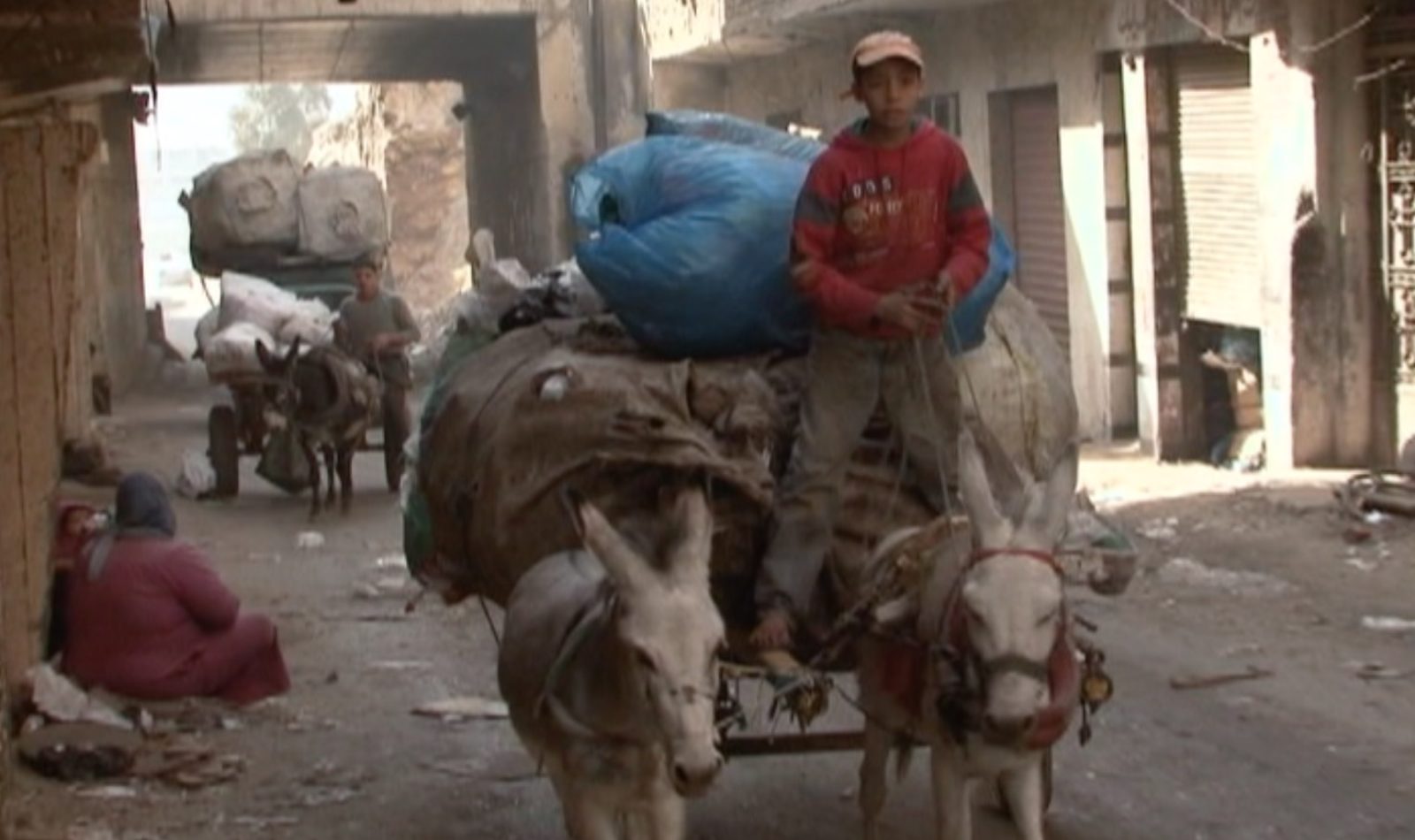 JUDY WOODRUFF: Next: the efforts of two social entrepreneurs to make something better from garbage.
Special correspondent Fred de Sam Lazaro has our report from Egypt.

FRED DE SAM LAZARO: If these students seem a bit old for their tasks, it’s because none of them had ever set foot in a school until this one opened two years ago. The kids come from generations of illiterate and poor garbage collectors.

LAILA ISKANDAR, social entrepreneur: This is how we learn numbers. These are ones, so there’s tens of those in this. It’s complicated if you don’t touch and feel. That’s what Maria Montessori taught us, concepts, math concepts.

FRED DE SAM LAZARO: Social entrepreneur Laila Iskandar has taken it on herself to change the world of those who live in Medina Zabaleen, literally, “Trash City,” on the outskirts of Cairo.
For decades, the collectors, also called Zabaleen, have hauled home what the people of Cairo threw away. Eighty percent of it was recycled and sold, with organic waste fed to pigs owned by the Zabaleen. Pigs are considered unclean in this largely Muslim nation, but the Zabaleen are Christians. Their garbage collection methods earned them little money and even less respect.

LAILA ISKANDAR: They’re perceived to be dirty. They don’t wear a clean uniform. They don’t really wash their trucks. They used to raise pigs, and that’s not a very clean enterprise.

FRED DE SAM LAZARO: A decade ago, the government tried to modernize waste management by hiring European firms to handle the trash in major cities. But Cairo’s 17 million inhabitants, who produce 13,000 tons of garbage every day, were accustomed to door-to-door pickup by the Zabaleen. Iskandar says they didn’t take easily to sorting, recycling and carrying trash to bins. The multinationals also found it hard to hire workers, especially the historically self-employed Zabaleen.

LAILA ISKANDAR: They refused. They said, we are entrepreneurs and we are recyclers. Do you really think we enjoy going out and handling this dirt just because we love dirt? You know?
So, anyway, they tried to hire others, but there’s a stigma to the trade. It’s not such a pleasant thing to do. And they couldn’t retain their labor.

FRED DE SAM LAZARO: Finally, Iskandar says, the multinationals and Zabaleen made an informal arrangement, allowing these traditional collectors again to work door to door in some neighborhoods.
But, last year, the Zabaleen were dealt a huge setback. In 2009, the Egyptian government, responding to the swine flu epidemic, ordered all pigs killed in the country. Some 300,000 of the animals were culled. The move did nothing to contain swine flu. It did make people appreciate just how much organic waste the animals consumed. The pigs kept the city of Cairo clean.

For the Zabaleen, farming pigs was a source of both income and protein. With no pigs to feed, they had no reason to pick up organic waste. Tons of it is now strewn along streets and in overflowing bins. Neither goats nor the methods of rich countries, where trash is separated by households and dumped in large landfills, have worked here, says Iskandar.

LAILA ISKANDAR: You can’t copy-paste systems that work in the north in the south. It doesn’t work. And it wasn’t smart in the first place.

FRED DE SAM LAZARO: She thinks the solution lies in a more educated and competitive generation of garbage collectors, who learn a uniquely tailored vocabulary in the school.

LAILA ISKANDAR: Pert Plus, Pantene, Head and Shoulders, these are the first words we learn in our literacy class.

FRED DE SAM LAZARO: Pert Plus, Pantene, Head and Shoulders because their maker, Procter & Gamble, pays a few cents for every container that is recycled. The company is anxious to keep them from being refilled and sold by counterfeiters. The literacy taught here is practical: learning to read city maps, spreadsheets, to negotiate for a better contract, whether with municipalities or multinational companies.

LAILA ISKANDAR: In 2015 or 2017, when the other contracts are up for negotiation, or, we hope, end, these guys here will be ready to renegotiate. Contracts are part of the curriculum.

FRED DE SAM LAZARO: Even as she tries to improve the lot of garbage collectors, Iskandar wants to raise public awareness of the growing garbage crisis and the need for recycling. It’s a crisis not just in cities, but also rural areas, like the Sinai Peninsula. Here, she’s worked with another social entrepreneur, Sherif El Ghamrawy. Ghamrawy started the first eco-lodge along this coast in the 1980s. Everything, from food to furniture, is recyclable or recycled. But with the growth of tourism came another opportunity.

SHERIF EL GHAMRAWY, social entrepreneur: After I saw how the development is going on in this area and a lot of hotels started coming up, and little camps, so the trash was all over.

FRED DE SAM LAZARO: With Iskandar’s help, he designed a recycling program and signed agreements with the surrounding towns and especially the area’s large hotels and resorts to handle their refuse.
Organic or food waste is given to the livestock of bedouin herders native to this desert region. Plastics and so-called inorganic materials go to a transfer center set up by Ghamrawy’s organization, Hemaya, or “Protection” in Arabic.

SHERIF EL GHAMRAWY: We can see that we work in a touristic area with lots of alcohol.

FRED DE SAM LAZARO: Glass bottles of every color and shape, cardboard and papers and plastics destined for a variety of recycled uses.

SHERIF EL GHAMRAWY: This is the anti-shock that is used for shoe soles, and also hair for the ladies, you know, the hair…

FRED DE SAM LAZARO: But what would happen before you came?

SHERIF EL GHAMRAWY: If its not very well-organized, everyone is collecting his own waste and threw it somewhere in the desert. The plastic bags, they fly into the sea and kill the corals or kill the fish.

FRED DE SAM LAZARO: Ghamrawy’s project has turned much of that debris into profit, exporting materials like plastic to China.

SHERIF EL GHAMRAWY: Because it’s a very, very expensive material, it can actually — we used to sell it for about 3,000 pounds. That makes about $600 per ton.

FRED DE SAM LAZARO: About 100 young men work for him. Most of them are migrants from the impoverished regions of Upper Egypt.

ABD EL NABY, employee (through translator): We came to make a living. There are no jobs. The economy is very depressed in Upper Egypt. We don’t mind doing this. It beats working for the government or a city job.

FRED DE SAM LAZARO: Their pay, including a share of the revenue from selling the plastic, is about $200 U.S. a month, a decent wage by local standards. Much of it is sent back home to their families.
So, they couldn’t earn this kind of money doing anything else here?

SHERIF EL GHAMRAWY: No. No. Some university graduates, they wouldn’t earn as much money as this guy.

FRED DE SAM LAZARO: Back in Medina Zabaleen, Laila Iskandar hopes her students can do even better. Among her stars is Moussa Nazmy. At 24, he has started his own business granulating plastic that will eventually be exported to China.

MOUSSA NAZMY, business owner (through translator): At a most basic level, I learned Arabic literacy. If I go to do a trade, I can definitely record it in words. I also learned new recycling methods, because it was different from what my father was doing.

FRED DE SAM LAZARO: He’s in the first 44 who have graduated from the recycling school, the very first person in his family ever to read.
For Iskandar, it’s the first step in bringing respect for him and for a trade that she says will be critical if developing countries like Egypt are to sustain healthy economic growth.

The efforts of two social entrepreneurs to make something better from garbage in Egypt.