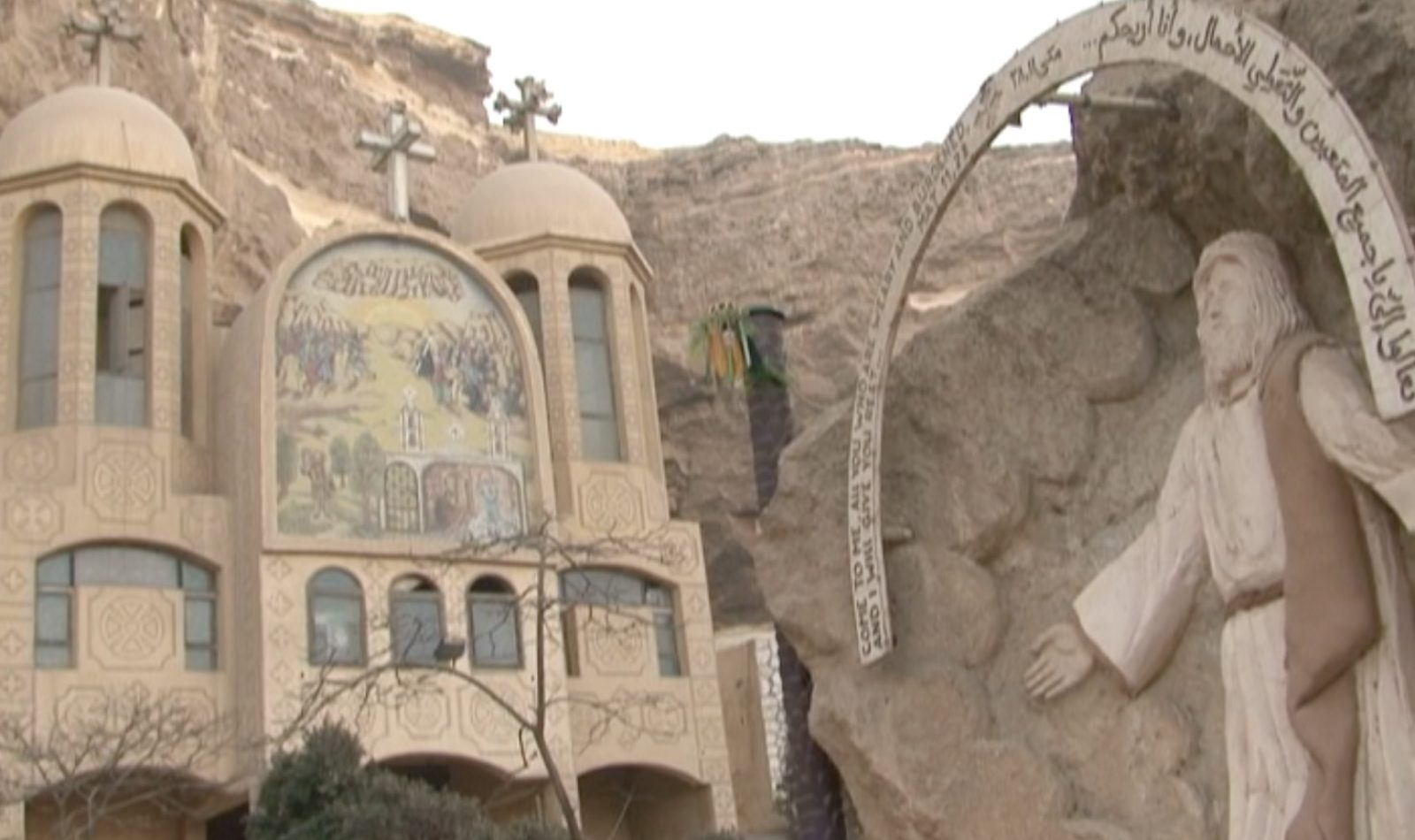 FRED DE SAM LAZARO: The church is carved out of El Mokattam, a giant bluff on the outskirts of Cairo. Egypt’s Coptic Church is one of Christianity’s earliest, and its history goes back to 42 A.D. This church was built in the 1990s by wealthier members of the Copt community, many living abroad.

But most of the Copts in Egypt today are poor and a distinct minority in a country that is now 90 percent Muslim. They often complain about being discriminated against.

Sometimes, religious tension has escalated into violence. Six Copt worshipers and a Muslim guard were gunned down outside a church on January 7, the day Coptic and orthodox churches celebrate Christmas.

The attack was an apparent retaliation for the alleged rape of a Muslim girl by a Christian man. The funerals for the dead brought forth more violence, this time angry Copts clashed with police.

Author and democracy activist Alaa Al Aswany blames the tension on a steady rise in the Wahabi brand of religious conservatism, much of it imported from and financed by Saudi Arabia and, he says, promoted endlessly on television.

ALAA AL ASWANY, author and democracy activist: You have, for example, in Egypt more than 17 TV channels every day promoting the Wahabi ideas.

FRED DE SAM LAZARO: Egyptians who grew up in the ’50s and ’60s say they see signs of this growing conservatism. Most Egyptian women now cover their hair, and growing numbers the niqab, covering all but their eyes. It’s evident even in cemeteries like this one, where you can see disagreement over inscriptions on tombstones.

AHMED THARWAT, TV host: This is the most merciful, whatever, and then somebody says we’re not supposed to do that, and he wipes it. You actually — the culture — you actually see the culture clashing in print right in the front — before your eyes.

FRED DE SAM LAZARO: Ahmed Tharwat has lived in Minnesota for 25 years, where he hosts a TV show for the region’s Arab-American community. He recently visited the Nile Delta village where he lived as a young man.

AHMED THARWAT: Well, this is all Muslims. This all, as you can see, all Muslim in this section.

FRED DE SAM LAZARO: He says, when he was growing up, one Christian family lived in the village. But there was no Christian cemetery nearby, so they were buried alongside Muslim neighbors. This departure from custom prompted some debate, but it was resolved by community leaders.

AHMED THARWAT: And I remember when the neighbor, my uncle said, he didn’t hurt us when he was alive. Why would he hurt us when he dies? And I think that really sum up the whole story, you know, that people act based on their values and their tradition, more than their religion. And their interpretation for religion will be through their values.

FRED DE SAM LAZARO: Would this ever happen today?

AHMED THARWAT: I don’t think so.

ALAA AL ASWANY: This intolerance has been existing in the society because of the Wahabi people, but also it has been transmitted as an infection to the other side. So, you have also some Coptic fanatics, and you have also Coptic channels who are trying to make the point that the religion of Islam is a whole bunch of nonsense.

FRED DE SAM LAZARO: Refaat Lakousha, a professor at Alexandria University, says everything now is seen through a religious lens.

REFAAT LAKOUSHA, professor, Alexandria University (through translator): You will always find a religious interpretation of any conflict between Coptics and Muslims, because we live in an era of tension between the religions that I’ve never seen registered at this level.

And that’s why, in any conflicts between Muslims and Coptics, in the subway or the market, it will always end up being taken in the religious context.

FRED DE SAM LAZARO: After the January riots, religious leaders from both communities succeeded in restoring calm. Copts and Muslims have lived side by side for centuries, with only occasional spasms of sectarian violence.

The key question is, are things different this time? Will the current tension escalate into an enduring religious conflict? Author Al Aswany thinks it’s not in the Egyptian character.

So, we have had one positive aspect to be belonging to a country which has been existing for six centuries — 60 centuries, 6,000 years, because everything you are having now, you will discover that it happened before many times.

FRED DE SAM LAZARO: Now everyone is bracing for the upcoming trial of the Copt man accused of rape and of the three Muslims accused of the Christmas Day killing.

Tensions are on the rise in Egypt between Muslim and Coptic Christian factions and these religious divisions have begun to escalate to violence.