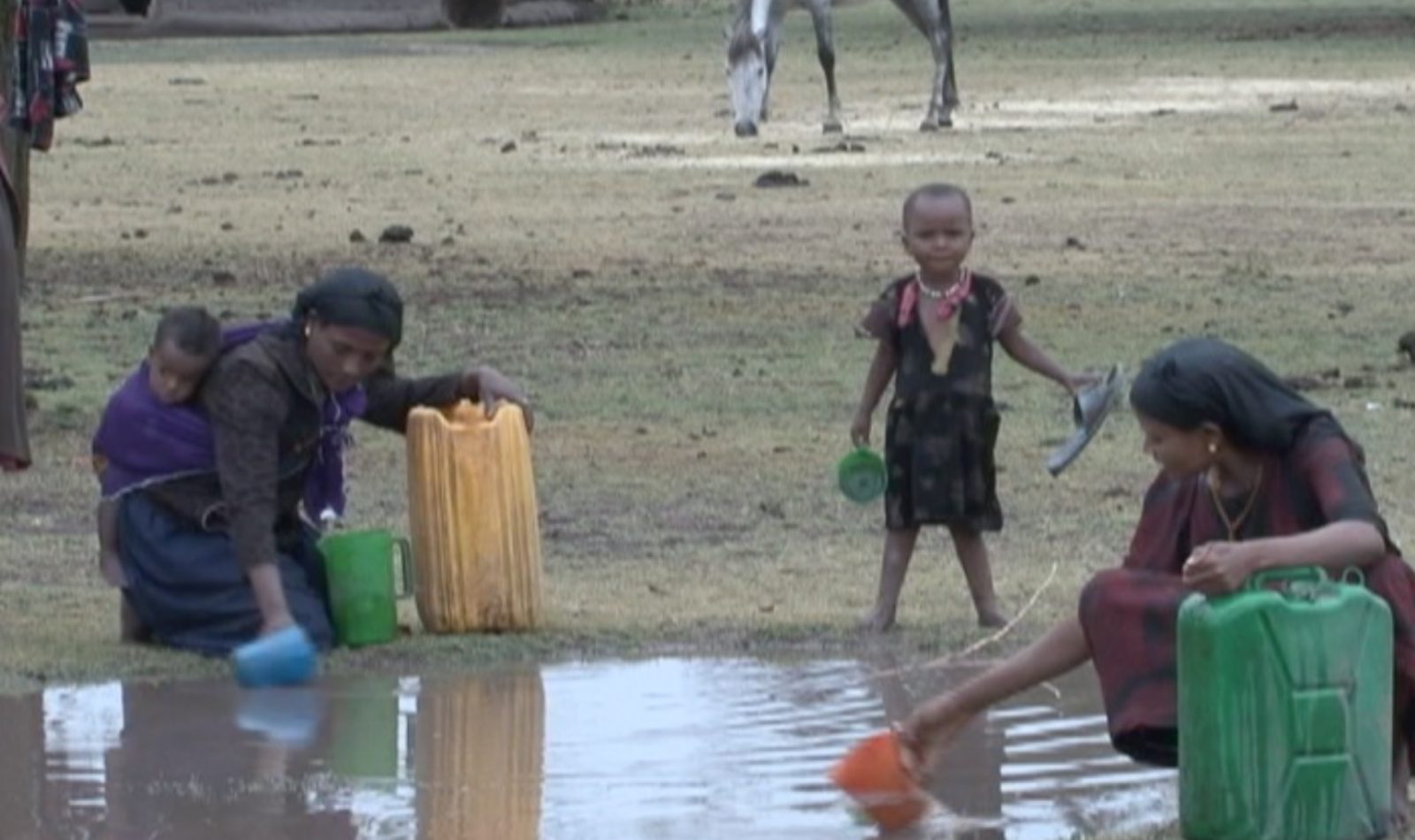 Clean Water is Never a Given

In the first in a series of collaborative reports about water problems around the world, Fred de Sam Lazaro ron the daily time-consuming job for families to reach clean water and how a partnership between an NGO and communities is helping to build and maintain new wells.

FRED DE SAM LAZARO: Keria Salo must balance concerns about her kids health against the perils of walking miles to what is called a community water point, or sometimes to an open pond or a river.

WOMAN (through translator): We usually go to the town to get water, but, even there, we always have to fight for a place in line. If you’re not from that area, you don’t get first preference. When you go further out, you always run into conflicts. The people with access to water are stronger.

FRED DE SAM LAZARO: It causes ripples throughout society. At a nearby school, the principal says water chores fall mostly to girls, who often come late or not at all.

ZERIHUN TEKLE, principal (through translator): It causes severe problems like dropouts, coming late, repeating classes, just regressing in terms of education. Plus, when they go further in the summer, when there’s less water, they get beaten up or abducted for marriages, which is another problem.

FRED DE SAM LAZARO: For years, development experts thought, if they just put in enough water points, the problem would be solved. It didn’t take long for many they did install to stop functioning, says Meselich Seyoum, who works for a Britain-based non-government organization called Water Aid.

MESELICH SEYOUM, Water Aid: In most cases, those failures happened because there was no involvement of community from the beginning. There was this feeling of, we know what’s good for the people, and then we just go in, put the system, and leave. There was — there was no ownership, and there was no capacity of the community, not knowing how to even manage the system, so that it can last for a longer period of time.

FRED DE SAM LAZARO: She says her agency now works in partnership with groups based in the country and with local communities.
In the village of Falka, this well-used facility was designed by an Ethiopian non-government group, Water Action. Because it’s arid here, the well is more than 1,000 feet deep and the water pumped up has to be treated for excessive fluoride.
Under the new approach, the aid groups provide engineering and scientific expertise, but it’s the villagers who must chip in, at least with their labor. In Falka, the community was given ownership and responsibility to maintain this facility. Every household pays about 50 cents a week, a rate set by local leaders. So far, the user fees have generated a fund balance of more than $1,000.

ABARRASH MUNATI, committee member (through translator): We have seven committee members who collect the money. They also educate on health issues. They bring it in once a week. So far, we have not had any complaints.

FRED DE SAM LAZARO: Abarrash Munati is on a committee set up by community leaders to manage the water point. She lacks much formal education, but she knows about her community’s system and what it has accomplished.

ABARRASH MUNATI (through translator): The white tank takes water from down below. The blue one treats this thing fluoride, which we hear is bad for people. Our kids used to suffer from diarrhea, stomach aches, typhoid. It was also difficult for us to keep clean because we couldn’t get water and we couldn’t afford it. Plus, also, pregnant women would have to go a long way to get water. We had a lot of miscarriages.

FRED DE SAM LAZARO: The fact that Abarrash Munati does not have to spend hours every day fetching water allows her time to be productive in other ways. And her family’s relative affluence is immediately visible in this home when you see these bags, stockpiles of cereals good for months for her family.
Her husband, Muhammad Hajji Siraj, agrees life is a lot easier for him and their five children.

MUHAMMAD HAJJI SIRAJ, Ethiopia (through translator): When she was away, we had to tend the farm, as well as the household. When the kids want their mommy, we have to tend them. Also, when they are late, we have to leave home and go in search of them. Now, with water closer by, we don’t have to worry about such things.

FRED DE SAM LAZARO: They also don’t have to worry about interruptions in their water supply. Several local residents have been trained to maintain it. Some day, they plan to install another water point.
The key question, why are villages like Falka so rare? Experts say there isn’t enough money to cover all of rural Ethiopia. Yet, at the same time, only a fraction of funds the government has set aside have been spent.
Adane Kassa heads the group Water Action.

FRED DE SAM LAZARO: That shows up in the report card from regions like Alaba, where the village of Falka is located, says Nuredin Hassan Lamacho, a regional government executive
NUREDIN HASSAN LAMACHO, regional government executive (through translator): So far, we have 16 dug wells. In addition, with help of governments and donors and our administration, we have dug a total of 34 boreholes. But this only reaches a third of the population. Two-thirds remain without clean water access.

FRED DE SAM LAZARO: At the rate they’re going, he says, it will take 40 years to get a source of clean water to every village in his jurisdiction. So, mud puddles and risky treks will continue to be a way of life.