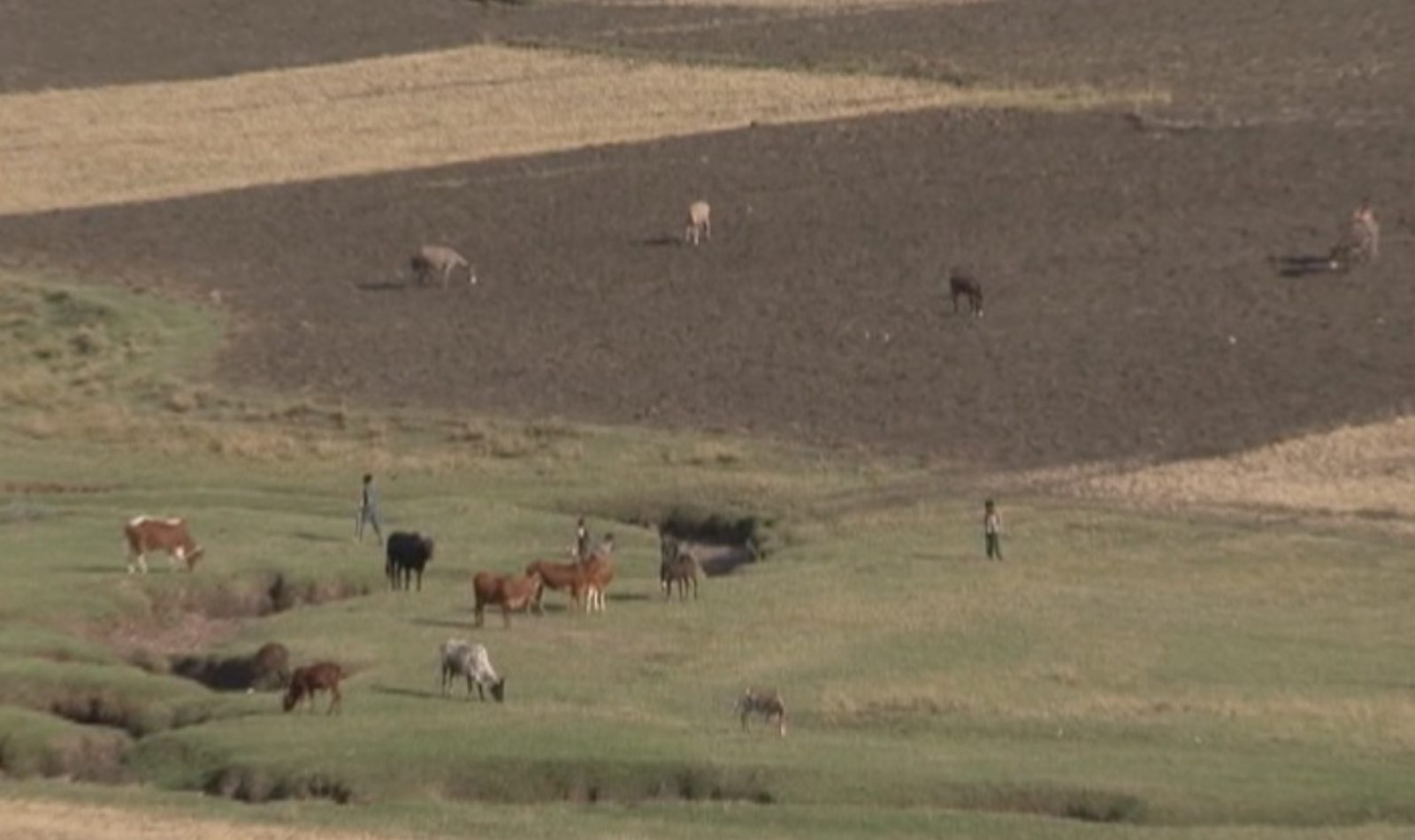 JEFFREY BROWN: Now a story of unlikely abundance in a land known for hunger and the questions that is raising.

FRED DE SAM LAZARO: For decades, Ethiopia has been synonymous with chronic famine and hunger. Even today, at least five million people depend on food aid to survive.

But a growing number of foreign investors are discovering a little-known fact about this East African nation: Ethiopia has vast acres of fertile, arable land.

MAN: I want to welcome you all, particularly our guests from Japan and Pakistan and India.

FRED DE SAM LAZARO: Recently, in the capital, Addis Ababa, local officials for a Saudi investor announced a partnership to vastly expand a commercial farm in western Ethiopia, aiming to produce a million tons of rice per year.

MAN: For us, it is a cornerstone. I think others will follow as well.

FRED DE SAM LAZARO: Others will likely come, and still others have already come. Over the past two years, by some estimates, 50 million acres of African farmland was leased to foreigners, most from the Middle East and Asia, for up to 99 years. That’s about twice the arable land in all of Germany.

The cost to lease land in Ethiopia is cheap, and there’s lots of it. So, why aren’t local farmers growing more?

Esayas Kebede, with the government’s agriculture investment agency, says they use only a fraction of the 180 million acres of land, and lack the technology needed.

ESAYAS KEBEDE, Ethiopian ministry of agriculture: The productivity is very low due to technology. Most of our farmers are plowing with ox.

FRED DE SAM LAZARO: That’s in sharp contrast to the carefully irrigated and fertilized commercial farms, like this one owned by a Saudi group. It raises specialized crops, melons, green beans, radishes, artichokes. Three hundred people work here. Most are subsistence farmers themselves. And, for some, employment has improved life, even allowed for a bit of dreaming.

EMA TAFA, Ethiopia (through translator): Previously, we can’t afford vegetables. It used to be a novelty. Now we eat them regularly. I would like to invest in my kids’ education. I never got an education. That’s why I’m in the state I’m in today.

ADEGNEW ABEB, Ethiopia (through translator): I’m continuing to receive knowledge. If I’m lucky enough to get married, I will start a family and, hopefully, with some seed money, start a farm like this one.

FRED DE SAM LAZARO: There’s one big problem that some economists and government opponents see with all of this. They say the benefit to ordinary Ethiopians is minimal. To begin, all of the produce is intended for supermarkets in rich countries, in this case, Dubai.

Merera Gudina is political science professor and member of the opposition Oromo People’s party. He likens it to a colonial arrangement.

MERERA GUDINA, opposition leader: Food is growing — is grown on your land. And you don’t — you simply see, but don’t eat. Where is it going? It’s not for the local consumption.

He says the government of longtime Prime Minister Meles Zenawi, who took power in 1992, has given land away to favored investors, that it hasn’t arranged for proper compensation, bolstered employment, or managed to keep some of the food at home.

FRED DE SAM LAZARO: Instead, he says, commercial farms displace small peasant growers and herders. He cited a 17,000-acre farm near the western town of Bako. It’s been leased to an Indian company, which is planting corn. These small farmers say this development has come entirely at their expense.

How many people used to farm on land that’s now farmed by the commercial farm?

WEDAJO GONANA, farmer (through translator): This land has been in our families for centuries. We were growing oil seeds, tafe and grain for our animals to sustain ourselves. They offer jobs only to those who would accept 10 birr. They raised it from seven birr.

FRED DE SAM LAZARO: That wage, fairly common on commercial farms, is well below a dollar a day. And even though it’s more than most subsistence farmers earn, these men say it’s hardly enough to improve life in their impoverished community.

WEDAJO GONANA (through translator): They swindled us. They promised roads, schools, water and whatnot. But the only evidence we saw is when they wanted this piece of land for a road, they came in with excavators and created huge mounds. It was extremely muddy, and it was hard to get around.

FRED DE SAM LAZARO: The company declined to participate in this story. However, the government’s Kebede took strong issue with allegations that people are being kicked off their land.

ESAYAS KEBEDE: It is false. You know, it’s false.

FRED DE SAM LAZARO: Kebede says, for the most part, the government is leasing acres that have never been farmed. He also argues that the open market already has caused wages to rise on some commercial farms. And he says you can’t ask profit-oriented investors to work in development to tackle a community’s social problems. That’s a joint responsibility, he says.

NEBIYU SAMUEL, investor representative: I will be very frank. At the outset, I said we are here you know to do business.

FRED DE SAM LAZARO: However, he says his company’s investment will bring lots of development benefits: new infrastructure, for example, in a country that sorely needs it.

NEBIYU SAMUEL: Recently, we just ordered close to 1,000 trucks from Volvo. And we’re going to be utilizing it hopefully to transport this production. People are going to get involved in that sector.

And then the other attending jobs around that, the fuel suppliers, the food suppliers, the restaurants man, the hotel man, I mean, it’s immense in terms of employment and job opportunities. And this is — this is where people can really think positive, rather than saying, oh, money is coming from outside.

FRED DE SAM LAZARO: Many experts say Africa’s vast pastures could be the world’s next breadbasket. They say the world’s supply of arable land is dwindling due to urban development, climate changes and soil degradation.

So, this is a potential win-win situation, is what you’re saying?

FRED DE SAM LAZARO: But he says the history of deals with foreigners for natural resources in Africa is not reassuring.

LAMOURDIA THIOMBIANO: They don’t respect, for instance, the indigenous living conditions. They don’t treat the people who are in this land appropriately. They don’t have any gain. All the timbers and all the goods are removed from the forests, destroying the environment, polluting the land’s water.

FRED DE SAM LAZARO: His agency is drawing up a code of conduct to make such farmland deals more equitable to all parties. The document will merely be advisory, but he says it will shine a spotlight on the biggest scramble for African land since this continent was colonized.

In Ethiopia, farms backed by foreign investors are growing with abundance, while native farmers subsist on food aid. A report about the unlikely abundance in a land known for famine.