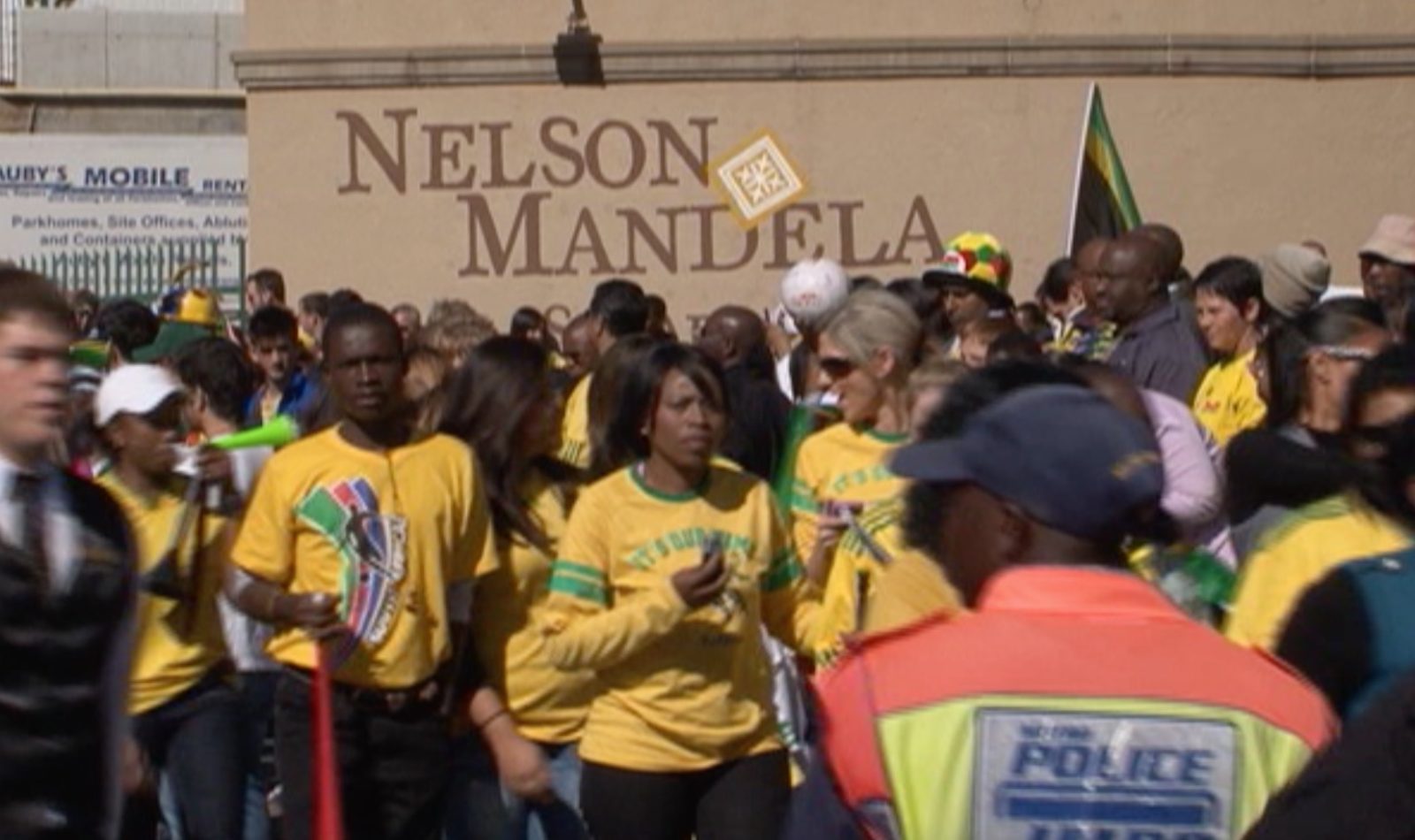 FRED DE SAM LAZARO: For the 370,000 tourists who will attend the World Cup, South Africa will present a glitzy, modern face, a brand-new bullet train into town from Johannesburg Airport, fancy cars on broad freeways to booming suburbs.

There’s even a new mall in the historically black township of Soweto, also infected with soccer fever. Not long ago, the only blacks in places like these would have been cleaning them. But, today, few South Africans of any color could match the consumer appetite and buying power of Tim Tebeila, one of the new class of black industrialists.

He arrived the other day to check on the progress of a new multimillion-dollar home he’s building.

MAN: I’m still waiting for the Italian chandeliers to come in that you chose.

MAN: And I think it weighs, what, one-and-a-half tons?

TIM TEBEILA: Well, I’m blessed. That’s what I can say.

FRED DE SAM LAZARO: Tim Tebeila, son of a preacher and housewife, grew up in humble circumstances, like most black South Africans. He joined the African National Congress, the ANC, which was banned for fighting apartheid.

Racial segregation officially excluded the 85 percent black majority from all but the most menial jobs in an economy based on diamonds, platinum, and gold that gave the white minority one of the world’s highest standards of living.

MAN: Please raise your right hand and say, so help me God.

FRED DE SAM LAZARO: The struggle culminated in the 1990 release of ANC leader Nelson Mandela, after 27 years of imprisonment. He was elected president of a new democratic multiracial Republic of South Africa in 1994.

TIM TEBEILA: My business career in 1994, I can say, has improved dramatically.

FRED DE SAM LAZARO: Tim Tebeila was trained as a teacher, but says he’s a natural salesman who quickly found success in the insurance business. By 1995, with the new government came new opportunities.

TIM TEBEILA: I then established a company called Tebeila Building Construction. Now, that was also in response to a new trend — new trend in government in terms of trying to empower the blacks and to advance particular policies.

FRED DE SAM LAZARO: Tebeila went on to acquire the rights to vast holdings of South Africa’s rich coal deposits. He’s one of the earlier and most successful beneficiaries of new and increasingly sweeping policies to increase black participation in the economy: more ownership of shares in industry, affirmative action in hiring and training, and more government contracts.

But, to many experts, Tim Tebeila is one of all too few success stories.

Aubrey Matshiqi is a political scientist at a Johannesburg-based think tank.

AUBREY MATSHIQI, political scientist: South Africa has become one of the most unequal societies in the world. In fact, in the past, prior to 1994, the inequality was between black and white. But, today, inequality has taken both an interracial and an intra-racial dimension.

So, you have black people who have benefited quite a lot since 1994, but you still have the majority who are still plagued by conditions of poor social and economic conditions.

FRED DE SAM LAZARO: In fact, black unemployment in South Africa hovers around 27 percent, if you don’t count people who have completely dropped out of the work force.

Meanwhile, whites, 12 percent of South Africa’s 50 million people, still occupy nearly 80 percent of all professional jobs. White unemployment is around 5 percent. Whites have lost jobs in the public sector, mostly to blacks, many to ANC members. They have also lost some private industry jobs because of affirmative action.

There’s been particularly stiff resistance to the so-called black empowerment programs among conservative Afrikaner farmers, descendants of Dutch or Boer immigrants who were the backbone of the apartheid regime. They complain about pressure to sell to or partner with blacks, and they point to violent attacks that have taken place on their farms.

ANDRIES STEYN, farmer: They are trying to take the farms and all that sort of things. If you put them together, there’s only one conclusion you can get to, and that is, they want the whites out of this country.

FRED DE SAM LAZARO: John Duncan Prinsloo a farmer and veterinarian, has decided to sell his farm, the result of a tragedy that struck late in 2009. Armed robbers broke through his security system and killed his wife of 34 years, Leticia. Prinsloo himself hasn’t recovered from gunshot wounds to his back.

FRED DE SAM LAZARO: Crime, which used to be confined to the black townships, now indeed is rampant throughout the country, with 50 homicides daily, despite the government’s tripling its spending on tackling the problem.

And that’s not the only tough issue facing the post-apartheid country. All South Africans complain about the declining quality of public services, police and government workers falling down on the job, underperforming schools, and universities that don’t turn out enough and qualified black candidates for skilled jobs.

Jenny Cargill is the author of a new book on the country’s black empowerment programs.

JENNY CARGILL, author: We didn’t link our empowerment policies with education. Government is also responsible for the delivery of these targets that business has been given, because they must improve the education services, and they must produce the graduates.

FRED DE SAM LAZARO: Nonhlanhla Mthethwa and her husband, Peace, run an events management business. They have benefited from some contracts, called tenders here, but she says they feel increasingly shut out.

JENNY CARGILL: The general perception among people — and the evidence seems to be building on it — is that it’s not a question of just being black. It’s a question of being connected. And it really is a select few that are politically well-placed that are gaining access to the licenses and to the contracts.

FRED DE SAM LAZARO: Some analysts worry that corruption has become pervasive in the public sector.

Lumkili Mondi, economist for a semi-public company that promotes industrial development, blames a lack of leadership.

LUMKILI MONDI, economist: The leadership we have in (INAUDIBLE) party for me leaves a lot to be desired.

FRED DE SAM LAZARO: Current President Jacob Zuma survived a corruption trial on a technicality just months before taking office. He’s been plagued since by ongoing stories of marital infidelity in an already polygamist marriage, which is legal in South Africa. He has three wives.

LUMKILI MONDI: It all talks to a lack of long-term vision, the leadership, because people respond to what they see at the top.

FRED DE SAM LAZARO: But he and others predict people will sooner or later respond as voters. The African National Congress, though still popular as the party of Mandela, the one that delivered the country from apartheid, will suffer from its complacency, says analyst Aubrey Matshiqi.

AUBREY MATSHIQI: Change is inevitable. So, when President Jacob Zuma argues that the ANC will be in power until the second coming of Christ, my interpretation is that that’s one of the most optimistic things President Zuma can say, because it means Jesus Christ will be with us much sooner than we think.

FRED DE SAM LAZARO: Coming more predictably is the opening match of the tournament. It’s brought South Africans together like no event before.

TIM TEBEILA: FIFA 10 has brought all races, all nations in South Africa together, more than anything else. The spirit is different altogether. This, we have never experienced it before.

FRED DE SAM LAZARO: South Africans can only wonder whether and how long it will last beyond the World Cup, which concludes on July 11.

Ahead of Friday’s World Cup kick-off in South Africa, Fred de Sam Lazaro reports from Johannesburg about what hosting the matches for the first time mean for national unity in the post-apartheid country.