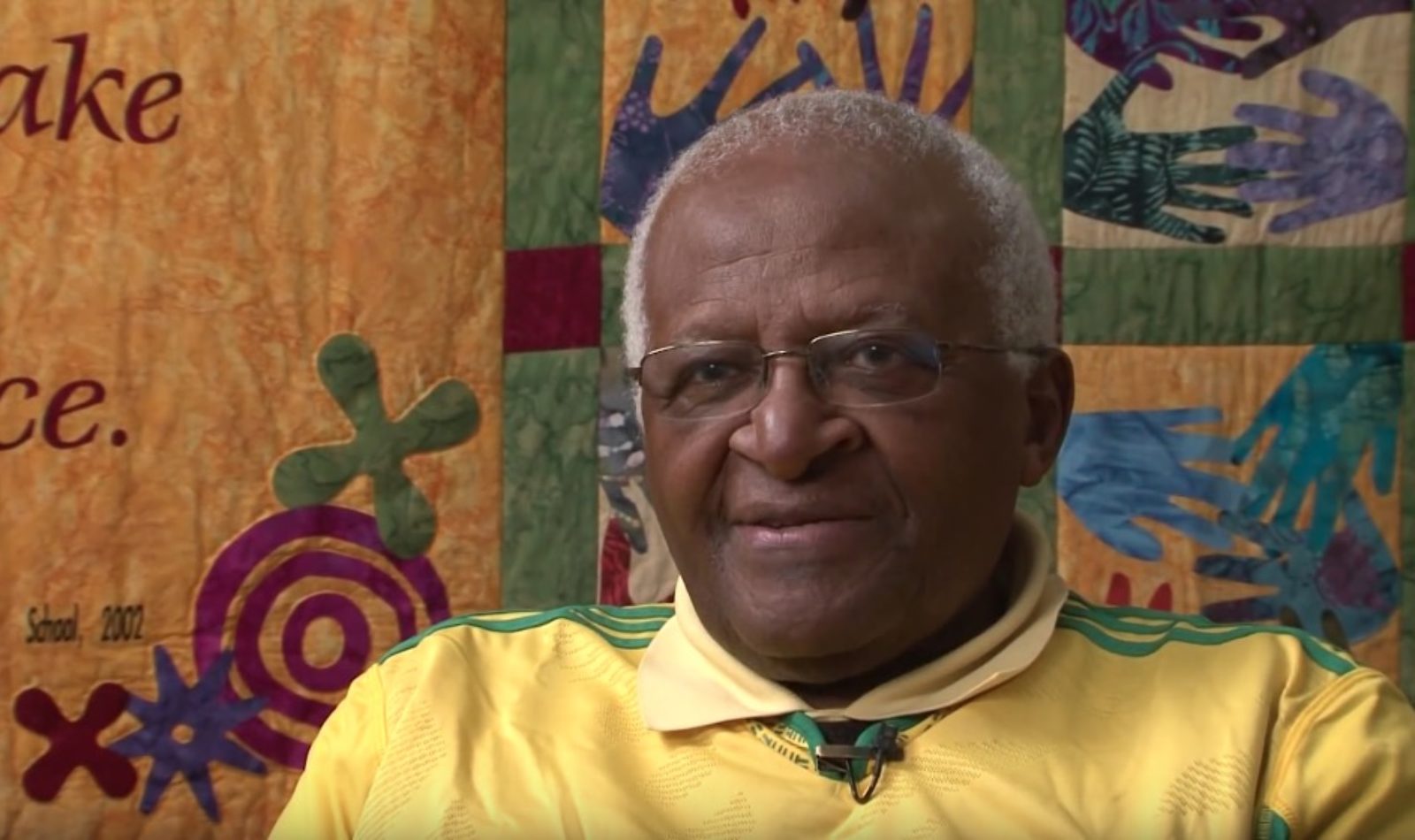 A look at South Africa 16 years after Apartheid, including an interview with Archbishop Emeritus Desmond Tutu.
Play Story
Subscribe to Stories

FRED DE SAM LAZARO, correspondent: South Africa has spent six billion dollars just on stadiums-money that could have gone to many pressing needs in a poor country. But that debate has been set aside for the celebrations these days. No one, it seems, has escaped World Cup fever-not even Archbishop Desmond Tutu, who came to our interview wearing soccer vestments.

ARCHBISHOP DESMOND TUTU: Many of those who are celebrating are the very ones that you would have thought wouldn’t because they are poor. But the scriptures long ago reminded us that human beings don’t subsist only on bread. You need things that lift your spirit.

DE SAM LAZARO: For five decades, Tutu has been one of South Africa’s most prominent voices -a leader in the struggle against the white minority rule of apartheid, leader of the Truth and Reconciliation Commission that is widely credited for a mostly peaceful transition after elections in 1994 brought the long-imprisoned Nelson Mandela to power. Now frail, the 92-year-old Mandela makes only rare public appearances. Tutu is also retired, but he keeps a much higher and often outspoken profile.

TUTU: God gave us an incredible start with a Nelson Mandela, and it would be very difficult to maintain that quality of leadership.

DE SAM LAZARO: After 16 years, the verdict on South Africa is decidedly mixed. It still has the modern infrastructure, built for its affluent 10 percent white minority. What’s new are places like this glitzy mall in the historically black township of Soweto. Not long ago, the only blacks in places like these would have been cleaning them. Today, few people can match the consumer appetite of people like Tim Tebeila, part of a new class of black industrialist. He recently came to the site of a multimillion-dollar home he’s building near Johannesburg.

CONTRACTOR (speaking to Tim Tebeila): We’re still waiting for the Italian chandelier to come in that you chose. I think it weighs, what, one-and-a-half tons?

DE SAM LAZARO: Tebeila was a young member of the African National Congress, or ANC, that was banned for fighting apartheid, which officially excluded the 85 percent black majority from all but the most menial jobs. All that changed after ANC leader Nelson Mandela’s election in 1994.

TEBEILA: My business career in 1994 I can say has improved dramatically.
DE SAM LAZARO: Tim Tebeila is a natural salesman who quickly found success in the insurance business. By 1995 came more opportunities.

TEBEILA: I then established a company called Tebeila Building Construction. Now that was also in response to a new trend in government in terms of trying to empower the blacks.

DE SAM LAZARO: Tebeila is one of the most successful beneficiaries of new, sweeping policies to increase black participation in the economy: more ownership of shares in industry, affirmative action in hiring, and more government contracts. The problem, many experts say, is that such success stories are all too few. The new policies have many more people feeling hurt rather than helped. Coenie Kriel has spent four months scouring the Internet for a new job.

COENIE KRIEL: A lot of the adverts are stipulating AA. That stands for affirmative action, meaning that they prefer the AA candidate.

DE SAM LAZARO: The 45-year-old mechanical engineer was laid off from a mining company in February. Four years ago he left a previous job after being passed over for a promotion. In both cases, he says, affirmative-action considerations may have hurt him, even though he’s not entirely opposed to them.

KRIEL: You get in these phases up and down, and you feel why me? But then you realize that’s basically life, and between myself and my wife we believe that it’s the way of the Lord.

DE SAM LAZARO: And overall Kriel has reason to be optimistic and confident. Despite government programs, white South Africans are doing well. White unemployment is just five percent, and given the shortage of engineers,
Kriel is confident he’ll soon land a job.
That confidence is hardly shared by blacks. Although living conditions have improved somewhat among black South Africans, black unemployment is officially 25 percent. In reality it’s likely much higher. Unlike their parents, young blacks like Nonthokozo Kubeka can visit shopping malls, but many can do little more than visit.

NONTHOKOZO KUBEKA: I think that the problem in South Africa is that we have the most brilliant policies, but they’re on paper.

DE SAM LAZARO: She got a government loan to attend college-the first in her family ever to do so. But the 24-year-old political science major hasn’t found a job 16 months after graduating.

KUBEKA: The situation is you are more likely to succeed if you know the right people, if you were in the struggle for some reason even. I’m too young to have been in the struggle.

DE SAM LAZARO: South Africans of all races complain about corruption, about high crime rates, about an education system in decline. Amid all this-amid political scandal surrounding the extramarital affairs of current president, Jacob Zuma, the ANC has continued to win elections, still trading, experts say, on its reputation as the party of Mandela. Archbishop Tutu says it will soon have to respond to growing discontent among voters. He’s urged the government to harness what he calls unprecedented national unity leading up to the World Cup.

TUTU: I haven’t seen so many people displaying our flag on their cars and every conceivable place. It’s just a fantastic thing, and we’re enormously grateful that it is there.

DE SAM LAZARO: Are you optimistic that it will reenergize South Africa? And if so, what gives you that optimism? You’ve expressed some reservations about the ability of this government to deliver the goods.

TUTU: I’ve always said I’m not an optimist. I’m a prisoner of hope, which is a different kettle of fish. Optimism is too light. Now to come to your question: I think that they do have amongst the cabinet people who are strategizers, people who are aware that there has been a kind of disillusionment among the people. I mean they’ve seen the protest demonstrations because people are upset at the slow delivery of services.

DE SAM LAZARO: Do you worry about the aftermath of Nelson Mandela’s passing?

TUTU: It’s going to be a horrendous moment in the life of our country. But human beings do have a capacity for adjusting. I mean we’re going to become a normal society, and we will not always be looking to Colossus to lead us.

DE SAM LAZARO: At the end of the day, Tutu said, he pins his hope for South Africa and for the world on what he calls humankind’s intrinsic goodness, the subject of a new book he coauthored with his Anglican priest daughter, Mpho Tutu. They argue human beings are hard-wired to do good.

TUTU: Fundamentally we are good, for you see a good person make us feel good, too. We felt good just watching a Chinese student standing in front of tanks. I mean knowing that he was not likely to succeed in stopping the carnage, but for a moment he did. He made those tanks swerve, and looking at that image our hearts leapt with an exhilaration. That said, yeah, that is how we should be. That is how I hope I would respond.

DE SAM LAZARO: You’ve written that evil will never have the last word.

TUTU: No. Sometimes it takes long.

DE SAM LAZARO: What is the terminal point where you say the last word is being uttered?

TUTU: For the ones who are suffering, it’s forever it seems, but happen it will. Just ask Hitler. Just ask Mussolini. Just ask Amin. Just ask the apartheid guys here. They used to strut around imagining they were totally invincible. You say, where are they today?

“Hoping against hope even when things are really rough—that’s what carried us during our days of our struggle, knowing that this is a moral universe,” says Archbishop Desmond Tutu. We interviewed him as South Africa was preparing to host the 2010 World Cup.