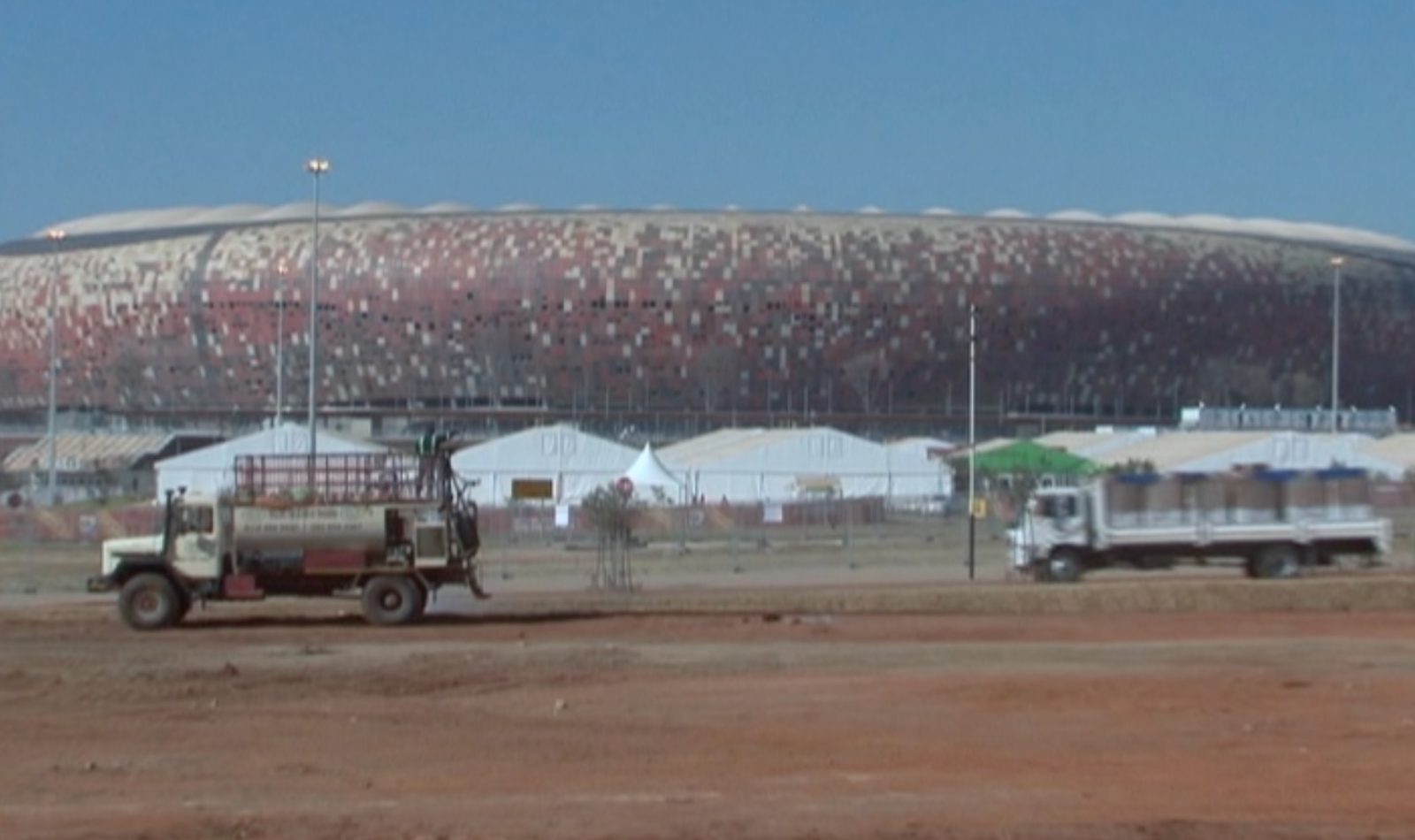 Unemployment Woes After the World Cup

PETER KRATZ, national director, Men on the Side of the Road: No, we
haven’t been isolated from the effects of the economic meltdown that went on
around the world. I think we — we lost somewhere around 900,000 permanent
full-time jobs, which necessarily creates more stress on the casual work
environment, because all those people are also going to be looking for some way
of supporting themselves.

FRED DE SAM LAZARO: Peter Kratz heads an organization named after the
people it serves, Men on the Side of the Road.

Every day, some 100,000 of them hit the sidewalks in search of daily
work. Lazarus Siletsa (ph), a veteran of small construction jobs, says he is
proud that South Africa hosted Africa’s first World Cup, but he has seen neither
gains nor benefit.

MAN: So, we are happy, but we are starving.

FRED DE SAM LAZARO: This 47-year-old father of five says he works maybe
two days a week for about $11 a day, far less than a livable wage, he says.

How are you managing without getting much work?

MAN: Well, I do manage because my wife is doing a part-time job at the
city (INAUDIBLE).

FRED DE SAM LAZARO: What does she do there?

FRED DE SAM LAZARO: For people like him, finding work is based on luck
or being able to outrun others to an employers pickup truck. They are in no
position to set terms or wages, vulnerable to being shortchanged.

Employers, in turn, have no assurance of quality work, no idea who they
are hiring. This is where the nonprofit Men on the Side of the Road comes in,
setting up its trademark yellow tent. The group advocates for the rights of
workers, while also vetting and training them to be reliable employees.

The first task for field workers like Mzoli Tembi is to get new client
to the tent to register with the group, to mingle with others who have. It’s
helpful, he explained, for when the pickup trucks, called bakkies here, come
calling.

MZOLI TEMBI, Men on the Side of the Road: When the bakkie comes here,
you saw the guys. They stand here, no, so that when the bakkies comes and stand
here or the bakkie stands there, I go and negotiate with them. Those guys stand
behind.

I come and talk to you and negotiate with you. If you are happy with
that, then the job is yours. You take the job. The only thing we need, we need
you to perform your duties to the best of your abilities.

FRED DE SAM LAZARO: Field sites, 180 of them in seven cities, are in
contact with the group’s Cape Town office and tiny call center.

MAN: And those two guys, are they finished with you now?

PETER KRATZ: Through our P.R. and our marketing activities, we try and
generate a lot of phone calls into MSR. And that’s for nationally. We try and
get — we have one number nationally and one Web site, so people contact us.

FRED DE SAM LAZARO: The office is funded by charitable grants and a
small fee charged employers. It checks on workers’ job history, education and
training, creating a track record for people who typically don’t even get to
know the names of their previous employers. Enrolled workers are issued an I.D.
card, key to building or rebuilding a resume.

FRED DE SAM LAZARO: The ultimate goal is to land permanent employment.
And if you get papers you can get jobs easily, right? So the nice thing about
that is instead of getting traffic you are now qualified and being qualified
means you get more money out of it. Right?

FRED DE SAM LAZARO: The ultimate goal is to land permanent employment.
Men on the Side of the Road offers training in several construction skills and
occasionally to bring out other talents.

Conrad Marima (ph) and Shonn Mukungwa (ph) were placed here by Men on
the Side of the Road, and it has fueled dreams of a better future. These soft-
spoken 25-year-olds now want to go into business for themselves.

MAN: Art. He would like to be an art businessman.

FRED DE SAM LAZARO: The more urgent need is to keep these jobs and many
others that will naturally end with the World Cup. Everyone is bracing for
tougher times, including Men on the Side of the Road, which placed 6,000 casual
workers last year, a drop in the bucket, but one that will be a struggle to
maintain.

PETER KRATZ: Well, our goal is actually this for 2010, is just to try
and maintain that level.

FRED DE SAM LAZARO: Because the economy is so bad?

PETER KRATZ: Because things are much tougher, yes.

FRED DE SAM LAZARO: And even when the economy turns around, Kratz says,
South Africa will suffer chronic high unemployment among people who have few
skills for today’s global economy.

Many experts blame the schools. They say the education system hasn’t
improved much from the apartheid era, which officially ended in 1994. Schools
for the 80 percent black majority trained people for menial jobs, a substandard
system by design. And many of those same teachers remain on the job, says
columnist and educator Sipho Seepe.

SIPHO SEEPE, columnist & educator: People who are teaching now,
especially the teachers, these are people who were products of that system, a
substandard system. So, you wouldn’t expect that the people who had been
produced by a substandard system will suddenly become excellent.

FRED DE SAM LAZARO: Back on the sidewalk, Ephraim Mocheko (ph) voiced a
hope all South Africans share, that, after weeks in the global spotlight, this
country has shown it can run a huge tournament successfully, that it’s a good
place to do business.

“It would be great,” he said, “if some of the foreigners can now invest
in South Africa’s economy and create jobs for people like us.”

The World Cup was South Africa’s own economic stimulus plan: $6 billion spent building or rebuilding stadiums, more on roads and a fast train. Still, the official jobless rate was 27 percent.