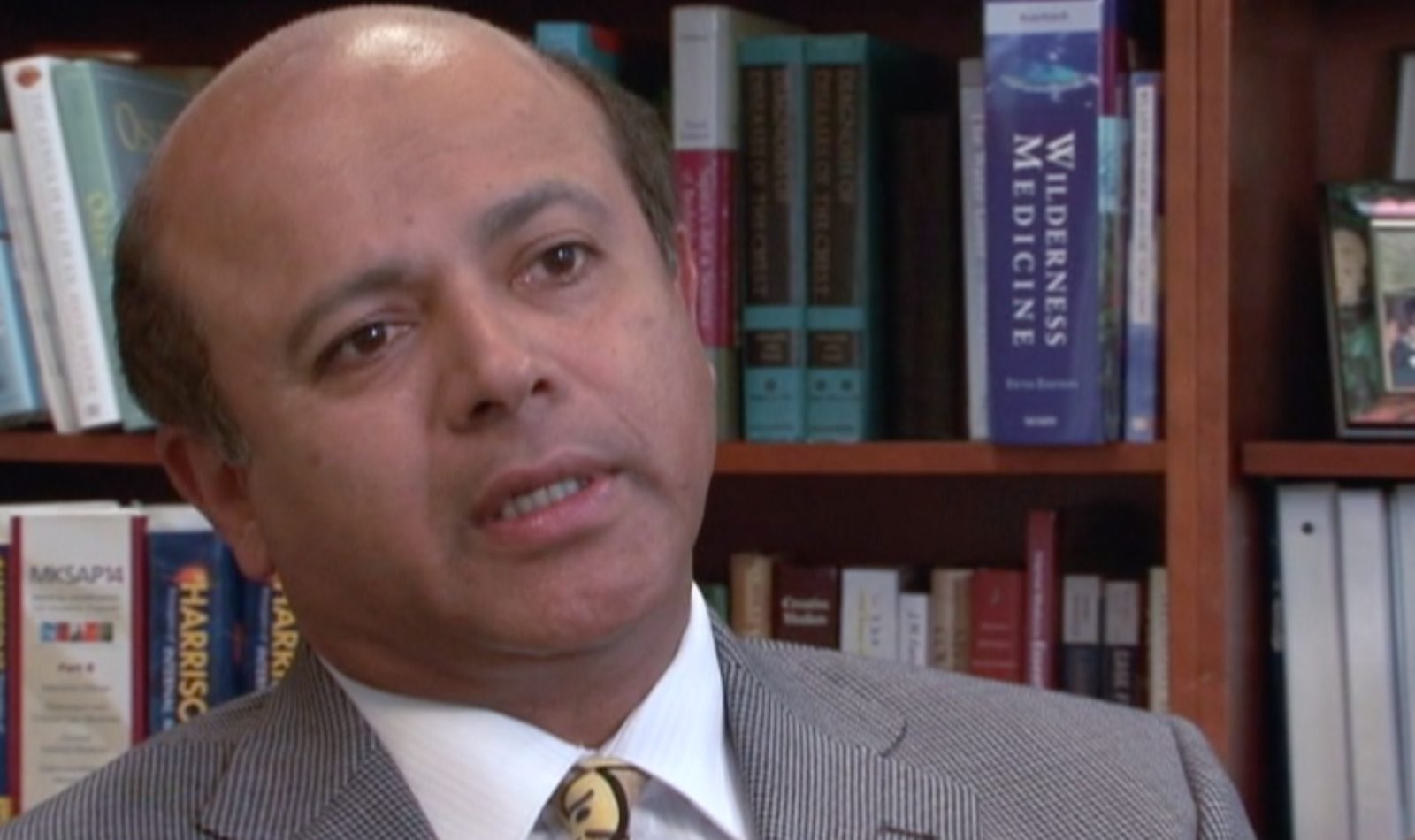 Abraham Verghese and the Samaritan Healer

FRED DE SAM LAZARO: Abraham Verghese has all the credentials and degrees befitting a professor at Stanford medical school. But he is best known and acclaimed for his writing – two best selling memoirs and a new work of fiction – that evoke a different kind of medical vocation.

ABRAHAM VERGHESE: My desire to be a physician had a lot to do with that sense of medicine as a ministry of healing, not just a science. And not even just a science and an art, but also a calling also a ministry.

DE SAM LAZARO: His goal is to have today’s medical students aspire similarly to a calling­ as much as a career in medicine, to awaken a more basic curiosity as they sharpen their clinical acumen. These third year medical students were studying abnormalities in this scan, specifically, the prominence of certain blood vessels.

VERGHESE: (Speaking to students) This is what’s called pulmonary re-distribution. Have you heard that term? It’s an early sign of heart failure. Who’s got good hand veins that I can borrow?

DE SAM LAZARO: Verghese offered a simple “physics” explanation of why blood vessels should not normally be visible above the level of the heart…

VERGHESE: (Speaking to students) The level of her left atrium is about here. So watch what happens as I raise her hand. Still see the veins, nice, three dimensional, right? See how they’re flattening out? Now they are gone!

DE SAM LAZARO: The bottom line: Well before an x-ray, a doctor might spot telltale signs of disease.

VERGHESE: (Speaking to students) Now if you’re talking to someone and you see their neck veins and they’re not coughing, speaking, singing, straining, they have increased venous pressure…

DE SAM LAZARO: Increasingly, he says students and practitioners of medicine in the west rely on technology in a system that stresses cognitive knowledge and machines over the skill that comes from touch and feel.

DE SAM LAZARO: It’s a theme Verghese has sounded repeatedly over the years, writing in magazines including the New Yorker and Atlantic, and now in a best-seller called “Cutting for Stone.” It fulfills a long-held desire to write fiction, as he told this book club in Menlo Park, California.

VERGHESE: (Speaking at book club) Dorothy Alison, a wonderful American writer, she says, “Fiction is the great lie that tells the truth about how the world lives.”

DE SAM LAZARO: The setting for Verghese’s novel is far from this Silicon Valley setting – a mission hospital in Ethiopia. It is a textured, 650 page narrative, set amid that country’s turmoil in the 60s and 70s. Its stories of medicine, doctors and future doctors at the hospital all illustrate what the author calls the “Samaritan role” of the healer. Verghese went from medical school in India to Boston, Tennessee, Texas, then Stanford. He was born and raised in Ethiopia to parents originally from Kerala, India and from its Syriac orthodox traditions. Faith was a big part of life for this and many other expatriate communities in the Addis Ababa of his youth-which may unwittingly have shape some of the novel’s characters.

Woman at Book Club: You said that what really inspired you to write the book was that you wanted to write a book that would get people interested perhaps in medicine. But there’s so much in the book about faith, and different types of faith. And so how did you come to have so much of this, of another theme in your book?

VERGHESE: Well, you know, the honest answer is that I don’t really know. It all just sort of evolved that way. And I think when you’re in medicine, you agonize over matters of faith.

DE SAM LAZARO: The confluence of faith and medicine, and the mission hospital itself, attracted Duke University divinity school dean Gregory Jones to Verghese’s book. It was a timely find, just before a recent trip to discuss his church’s own mission work.

GREGORY JONES, Duke University: It becomes a shaping institution that plays a really significant role in any developing country and one that we need to pay a lot more attention to. My trip to London was actually to deal with issues around southern Sudan, and so I was struck by the significant role this hospital was playing in the novel about Ethiopia.

DE SAM LAZARO: And even though its setting seems distant, Jones says the novel’s context is very relevant to many students he sees at Duke.

JONES: I think a lot of Christians go into nursing or medicine or other health-related vocations out of a deeply-formed and felt Christian vocation, but sometimes the practice of health care, in the United States particularly, often pushes that apart. And I think the novel portrays that in a really beautiful way.

VERGHESE: I joke but only half joke that if you show up in an American hospital missing a finger, no one will believe you until we get a cat scan, MRI and orthopedic consult…

DE SAM LAZARO:All the emphasis on machines, he says, adds cost to the health care system, and comes at the expense of one of our most important rituals – a visit with one’s doctor.

DE SAM LAZARO: Ironically, Verghese says, research is emerging that corroborates the importance of this bond, the virtue of the Samaritan healer.

VERGHESE: We’re learning that you can have a powerful effect on patients, or a powerful negative effect on patients based on context, based on your tone of voice. They are actually associated with significant chemical changes in the brain. The Parkinson’s patients’ dopamine levels go up with a placebo. We’re now able to show that the words of comfort trigger biological reactions which are the very things that you want, and you can use drugs to get there, or you can use words of comfort to get there, which would make your drugs so much more effective. It’s an incredible insight, and you know a couple of decades now of practicing medicine, it’s lovely to come full circle to where I started but with the science to back it up.

Verghese’s goal is to have today’s medical students aspire similarly to a calling­ as much as a career in medicine, to awaken a more basic curiosity as they sharpen their clinical acumen.