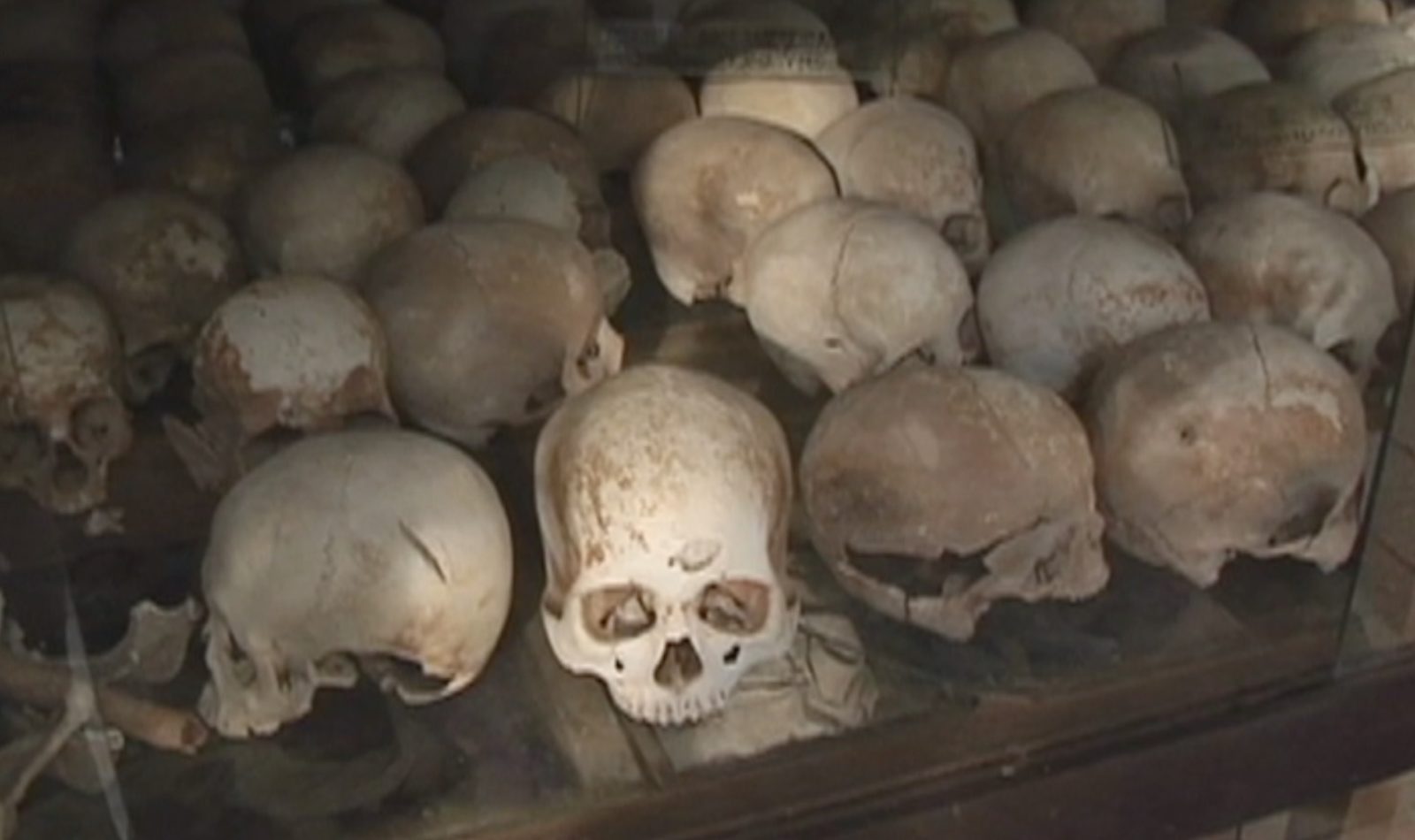 FRED DE SAM LAZARO: Cambodians gathered across the country to watch today’s proceedings in Phnom Penh at homes, cafes and community centers like this one.

FRED DE SAM LAZARO: The former jailer for the communist Khmer Rouge, also known as Duch, watched stone-faced as his sentence was read. The 67-year-old was found guilty of overseeing the deaths of thousands of Cambodians in the late 1970s during the time of the killing fields.

NIL NONN (through translator): The majority of the chamber sentences Kaing Guek Eav to a single sentence of 35 years of imprisonment.

FRED DE SAM LAZARO: The judges shaved off 16 years for time served and for Duch’s illegal detention in a military prison. It was the first ever verdict rendered by the U.N.-backed tribunal on the Cambodian genocide.

But it sparked anger among survivors and family members who were in the courtroom today, expecting a much longer sentence.

CHUM MEY, S-21 Prison Survivor (through translator): I’m not happy. My people are not happy. I’m angry once again. We suffered once under the Khmer Rouge, and now we are suffering again.

THEARY SENG, Khmer American Victims Advocate: It comes down to serving 11-and-a-half-hours per life that he took, which is just not comprehensible or acceptable.

FRED DE SAM LAZARO: Rob Hamill’s brother was one of the few Westerners to die under the regime after his sailboat was captured by the Khmer Rouge in 1978.

ROB HAMILL, Brother of Khmer Rouge Victim Kerry Hamill: All I can say is that my family who are no longer here to see justice would not want to see this man walk free, even if it is in 19 years’ time.

FRED DE SAM LAZARO: When Duch’s trial commenced two years ago, few Cambodians knew much about the international court, which has three Cambodian and two foreign judges. Two-thirds of today’s Cambodians weren’t even born when the Khmer Rouge were in power. The regime’s kingpins are either elderly or long dead, including the reclusive leader Pol Pot.

Their genocidal legacy, two million deaths, is memorialized in modest museums visited by Cambodian and foreign tourists. These include Tuol Sleng, the high school Duch supervised when it was converted into a prison, where some 15,000 people died.

Several nongovernment organizations and the court itself launched campaigns to educate the Cambodian public about the legal proceedings. Tens of thousands of citizens and school kids from around the country have been bused in on field trips.

MAN (through translator): Hello, and welcome to the 22nd program in our series “Duch on Trial.”

FRED DE SAM LAZARO: And, for several months, as many as two million Cambodians tuned in to a weekly TV show about the Duch trial.

WOMAN (through translator): Now we are going to see a selection of evidence given to the court about some of the crimes with which Duch has been charged.

FRED DE SAM LAZARO: Like the court, the TV series was funded by international donors.

MAN (through translator): Do you think the trial has gone well?

MAN (through translator): The process has been pretty impressive. I have supported it because I was one of the victims. I was in prison under the regime.

FRED DE SAM LAZARO: The Khmer Rouge regime fell three decades ago, but the tribunal was slowed, first by Cold War politics and then negotiations with the reluctant Cambodian government, some of whose leaders were young Khmer Rouge lieutenants, although none will stand trial.

CHUM SIRATH, Victims Association: When you commit a crime, there will

be people who try to put you — to take you into account. This is one of the lessons that the young generation can learn.

Youk Chhang, himself a killing fields survivor, has worked to change

YOUK CHHANG, Cambodia Documentation Center: This is the textbook for grade nine and 12.

FRED DE SAM LAZARO: He is director of the Cambodia Documentation Center, which has published a textbook that is now in the hands of one million Cambodian students.

FRED DE SAM LAZARO: Most kids growing up in this country have never

They never learned about this, but they heard about that.

Youk Chhang hopes this knowledge and the publicity surrounding the court trials will finally help the country move on.

YOUK CHHANG: The court helped to put the past behind. And that give us the direction and we return next to the future. And the court put the past into perspective, so that we can learn from it.

FRED DE SAM LAZARO: Even though most of Cambodia’s 14 million people struggle more immediately with poverty and economic survival, the international court is a critical building block for a sound, democratic future, says Eric Stover, a California-based human rights scholar who has closely followed the court.

ERIC STOVER, Human Rights Center, University of California, Berkeley: People will have basic needs and need to be attended to, but if you are going to have real progress, you also put in the infrastructure for democracy, infrastructure for the rule of law, infrastructure that will support human rights, because, without that, you will always be in an uphill battle.

FRED DE SAM LAZARO: Yesterday, survivors and relatives held a ceremony to remember those who died at the prison. The prosecution and defense have one month to appeal today’s verdict.

A U.N.-backed war crimes tribunal handed down its first sentence related to the genocide in Cambodia.