From the top of a hill near Makhanda, South Africa, the brightly colored homes with small yards all look similar. It’s school holidays, so children are playing and running through the streets.

A closer look, however, reveals stark differences between the comfortable houses on the left and the dilapidated huts on the right. At the bottom of the valley, houses have solar hot water heaters mounted on top of red roofs. Fences surround the properties, and leafy trees provide shade. As the hill rises, however, the paved streets turn into dirt trails littered with broken glass and garbage. Homes with cement walls turn into shacks pieced together with metal sheets or wood scraps.

The informal settlement, Sun City, is partly built on a former trash dump. I watched children play a ball game in the street and clamber onto a pile of trash to retrieve their toy when someone threw it too far.

Roughly 300 people live in Sun City, but you’d be hard-pressed to find a white person among them. Devastating poverty means they cannot count on the same clean water or reliable electricity as their neighbors down the hill.

Although apartheid ended 25 years ago, racial segregation and discriminatory laws that divided South Africans for almost 50 years continue to do so today through deeply ingrained social divisions and infrastructure inequality.

A man wears a “Black Lives Matter” shirt at a political rally on Human Rights Day in Sharpeville.

Human Rights Day is celebrated on March 21 each year in South Africa to commemorate the 1960 Sharpeville Massacre of anti-apartheid protesters.

The country feels old and so young at the same time. South Africa is home to the Cradle of Humanity, a UNESCO World Heritage Site, but its democracy is only four years older than me, a college student.

I came to South Africa through my internship with the Under Told Stories Project, a partnership between PBS NewsHour and my school, the University of St. Thomas.

I traveled with special correspondent Fred de Sam Lazaro, videographer Tom Adair and producer Joanne Elgart Jennings as we worked on a series of stories, all connected to the 25th anniversary of democracy in South Africa. Apartheid, a system of government sanctioned segregation, formally ended with the country’s first democratic election on April 27, 1994.

We were in Makhanda, known as Grahamstown until about a year ago, to put together a story about the drought and water crisis facing most of the country.

Sun City residents get their water from two spigots, one of which is unreliable. 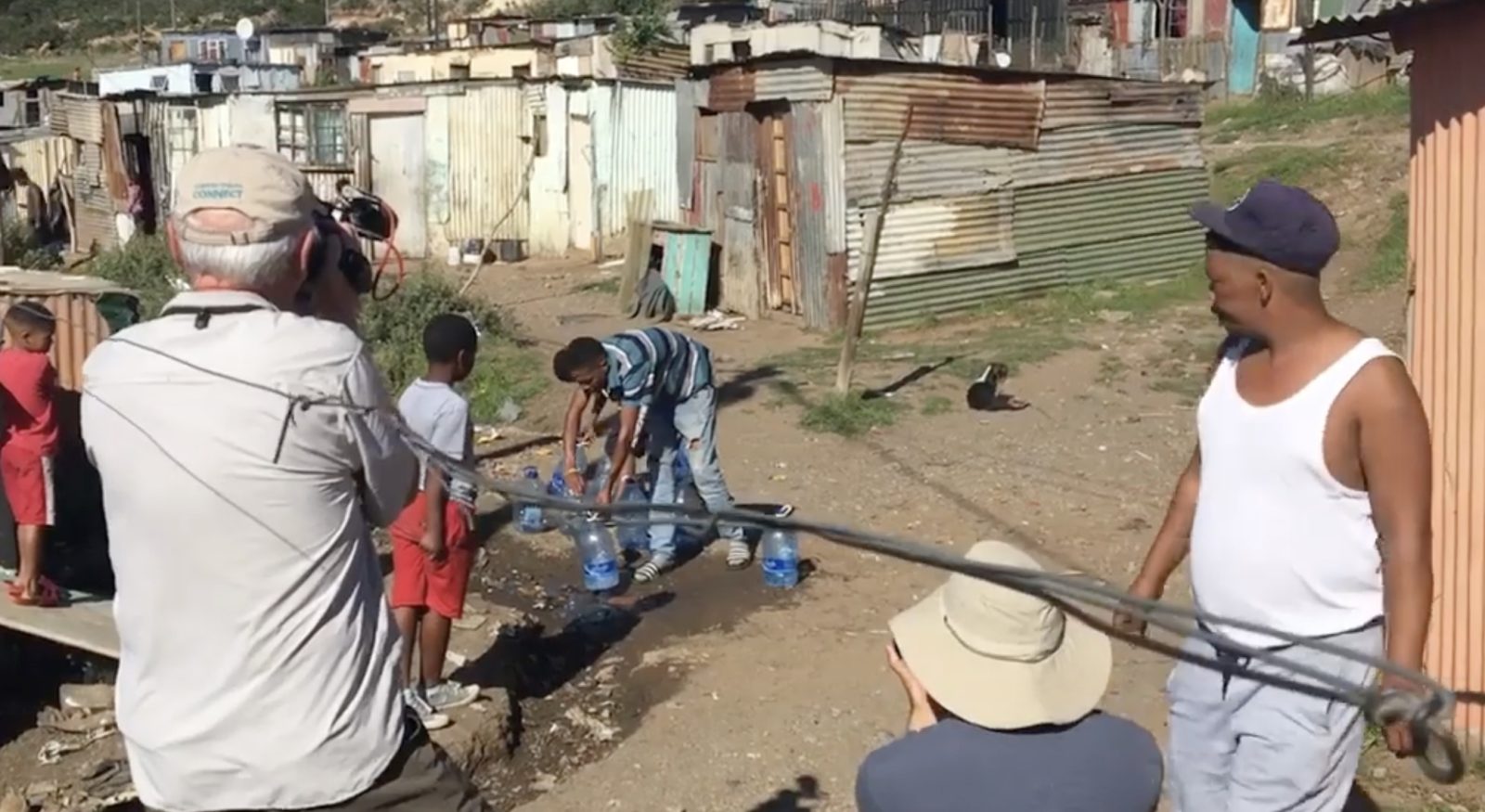 As we traveled across the country, working on four different stories over the course of two weeks, we saw debilitating poverty like that in Sun City and spectacular wealth in areas mostly populated by white people. If you were to peek over the fences and barbed wire that surround many of the nicer properties, you would find swimming pools and lovely homes.

Even their shiny shopping malls rival Minnesota’s Mall of America.

When we were in Johannesburg, we filmed an event at an Absa building, one of the largest banks in South Africa. It was a beautiful skyscraper with offices, a gift shop and a health clinic inside. While we waited for the event to start, Fred and Tom went outside with Rhulani, our South African contact, to shoot some video of the city center. They told me to wait inside with the valuables and equipment.

Fred described walking outside the building like moving from the first world into the third, from a building filled with smartly dressed business professionals to sidewalks filled with unemployed or homeless people. The sparkling office buildings turned into run-down developments.

There are beautiful buildings, smooth roads and breathtaking landscapes in South Africa, but only a fraction of the population can enjoy them.

It wasn’t hard to notice how racial demographics shifted as we moved from place to place. We almost exclusively had black waiters or hotel staff, and many of the professors and doctors we talked to were white people.

In some places,
South Africa has the infrastructure of a developed country.

There are smooth roads and efficient shipping ports, but many poor people are still trying to get clean water or reliable electricity.

The problem isn’t necessarily the infrastructure itself, but the fact that it was built for 5 million white people, not the entire black majority population of over 56 million. 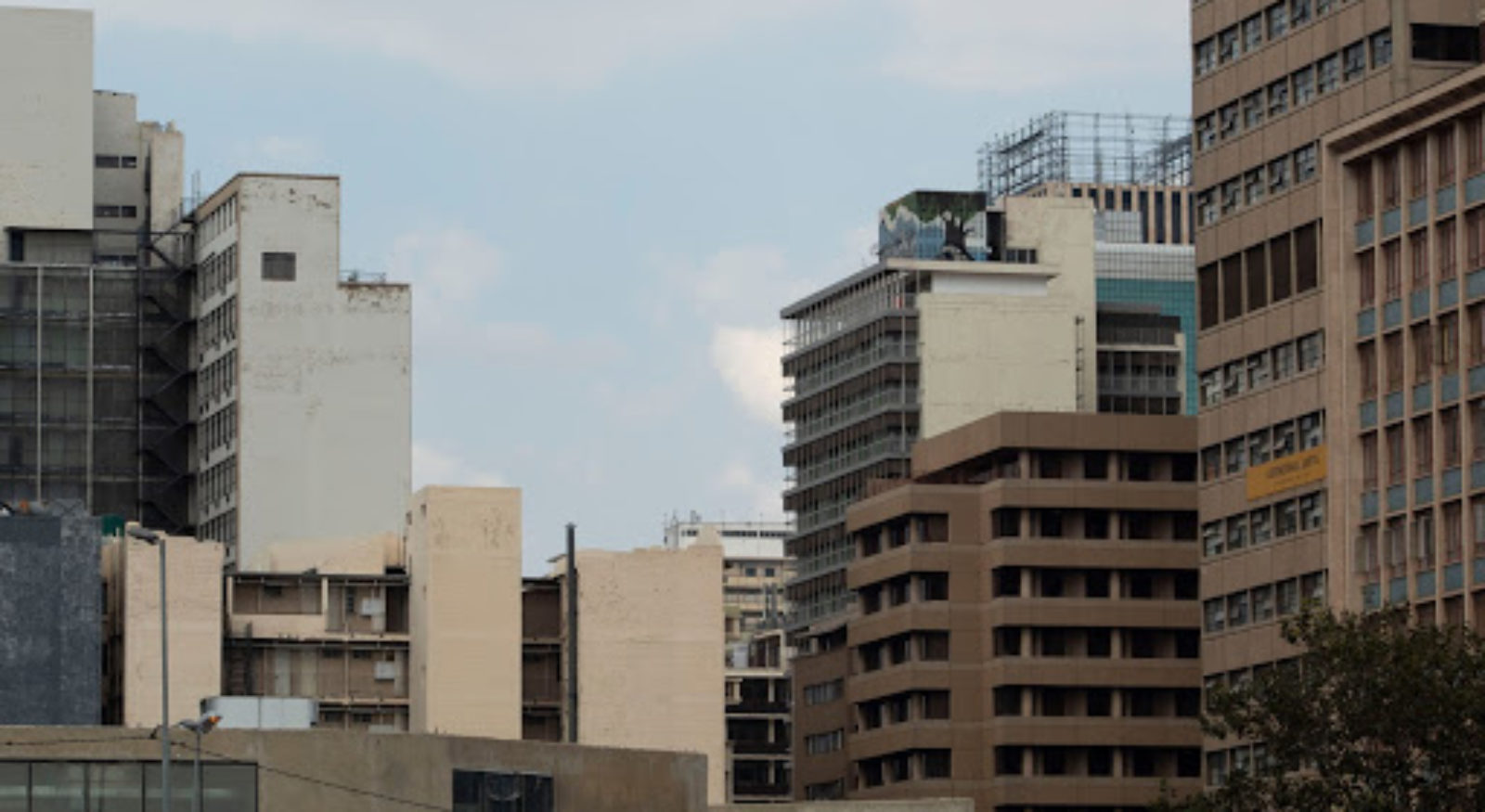 We take basic utilities for granted, but even keeping the lights on has become a struggle in South Africa.

Aging equipment and facilities have combined with broken power lines from a recent cyclone in Mozambique to create unreliable electricity and frequent outages. There simply aren’t enough megawatts to go around.

A news conference from the government and Eskom, a public utility which provides almost all of the country’s power, was held in our hotel one day. The room was bursting with journalists, cameras and officials.

“We want to apologize for the additional burden that we are placing on the people of South Africa at this time,” said Pravin Gordhan, the minister of public enterprise.

An additional burden that is caused by corruption, mismanagement and poor planning.

“I think the previous CEO and his colleagues at the time have a lot to explain to South Africa.”

“In a huge way,” Mashaba said. “We’re up in arms every single day… we’re the economic hub of this country’s economy. Now imagine small businesses, big businesses that are affected by this disruption.”

The outages don’t affect everyone equally. Our hotel was in a nice neighborhood of Johannesburg, so an outage would only last a few seconds or a minute before the generators kicked in. In Soweto, only a short distance from Nelson Mandela’s old house, a student we interviewed and her family were well-prepared to spend a few hours in darkness.

South Africans call traffic lights robots, and not every robot gets power back immediately after a blackout. We encountered queues of cars backed up at intersections and snaking up over the hills, honking in indignation whenever someone didn’t wait their turn. 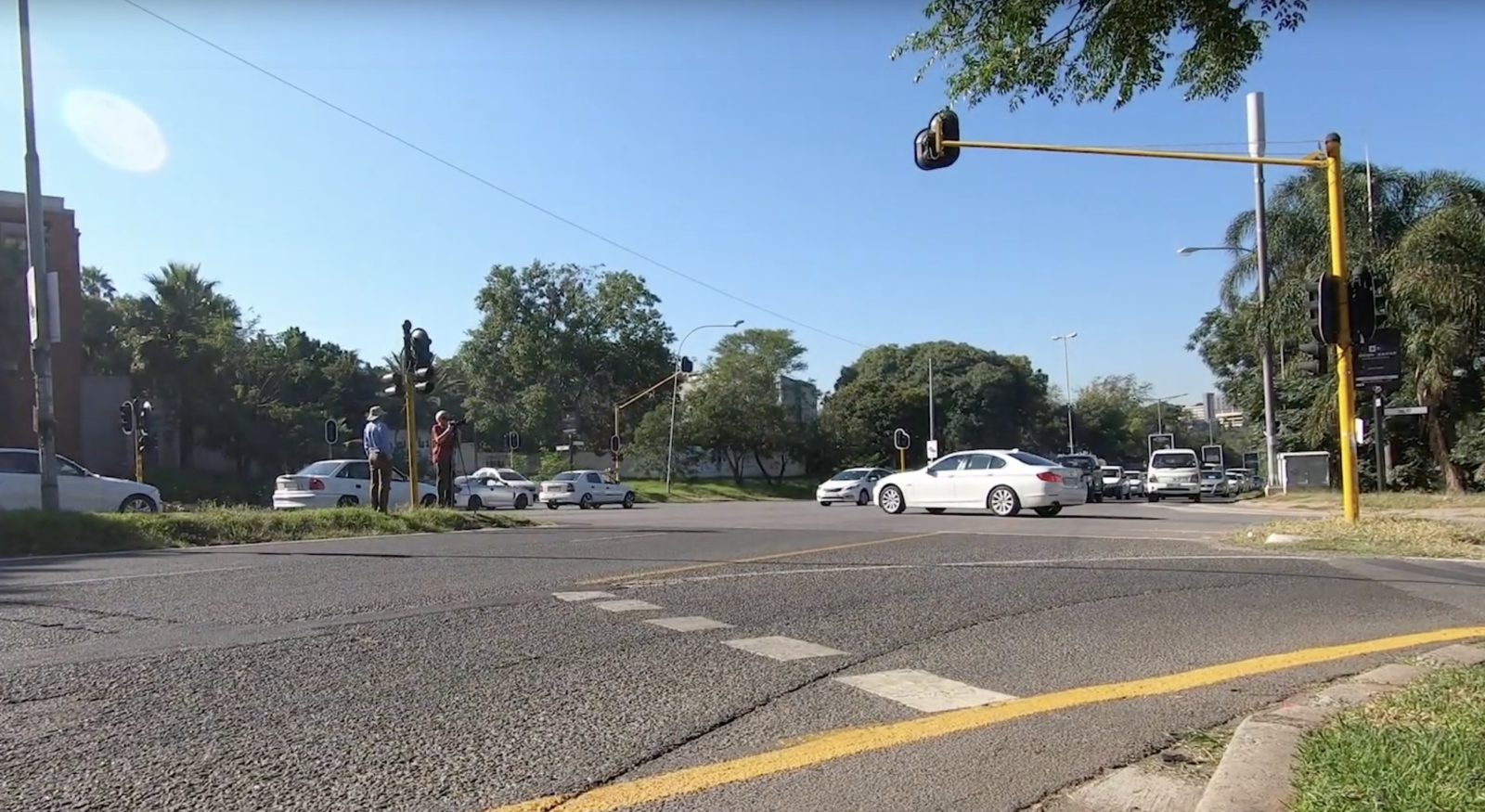 Intersections clog up when robots, as South Africans call traffic lights, shut down during power outages.

South Africa is in the midst of a large energy crisis and frequently experiences blackouts.

After spending time in Johannesburg and Makhanda, we traveled to the Western Cape of South Africa.

The picturesque city of Cape Town feels much different than the rest of South Africa. Beautiful beaches and towering mountains attract tourists from all over the world, and it’s not hard to see why. While we were in Cape Town for a few days, we spotted a rainbow and visited a penguin colony.

The world watched Cape Town come close to “Day Zero” last year, where they almost completely ran out of water. They averted the immediate crisis, but have had to make big adjustments since. Signs with tips and reminders about conserving water are ubiquitous across the city, and some people have gone as far as removing themselves from the municipal water grids.

We toured the home of Vanessa Burch, a doctor who lives near Cape Town and can afford to go off the grid by using recycled water and massive storage tanks.

“At the height of the 2017-18 drought period, we were in fact completely independent of water and the community,” Burch said.

Zola Nene, a South African cook we profiled, described Cape Town as the “Europe of South Africa,” which might explain why Day Zero received global attention but the water crisis that persists in the rest of the country has been largely ignored.

Hundreds of miles from Cape Town, the small city of Makhanda is facing a dire water shortage due to drought and crumbling infrastructure.

We stayed at a quaint bed and breakfast with large gardens and a continental breakfast in a quiet neighborhood on the west side of town. There were buckets in the shower to catch and reuse water and laminated reminders on the sink to conserve. It was pretty easy to take a quick shower and brush my teeth with bottled water.

Conservation like that was convenient, but on the east side of town, neighborhoods like Sun City have a much more difficult time getting water in the first place, let alone setting up systems to minimize use.

We are now in Makhanda, formerly known as Grahamstown. In the midst of a long drought and infrastructure crisis, we watched a bottled water distribution in the Joza township from @GiftoftheGivers #OnAssignment @UnderTold @UofStThomasMN pic.twitter.com/EuEHHIBFch

We needed video footage of people in Sun City using water for the story, but we struggled to find anyone who hadn’t already made the trek to get their daily allotment. It was only a stroke of luck that we spotted Sun City resident Selina Pikes doing her laundry in the sun. She said they sometimes go a week without water and use the same supply for laundry, drinking and cooking.

“We have to boil it before we drink it,” Pikes said.

Problems in South Africa don’t just lie in the power lines and water pipes. The divide between rich and poor is much wider than many places in the world and racial segregation often falls on the same lines. The infrastructure that was sufficient until 1994 has proved to not be enough for the new democracy.

“Previously under apartheid, our water supply scheme very much targeted the white population, and there were people that were not accounted for,” said Jane Tanner, a hydrologist at Rhodes. “But it hasn’t been kept up and added to, and that’s where we’re at at the moment.”

Posters from South African political parties cover a pole.
South Africans are losing confidence in the African National Congress after years of corruption.

There were high hopes in South Africa after Apartheid ended and Nelson Mandela was democratically elected, but corruption, division and drought are not the better future South Africans dreamed of.

Six years after his death, Nelson Mandela’s legacy still looms large in South Africa. Streets and buildings bear his name, and I spotted monuments or tributes in banks, hotels and public squares. Many South Africans reverently refer to Mandela by Madiba, his traditional Xhosa clan name.

You’d be hard pressed to find anyone in the country to say something negative about Mandela, but voters have become disillusioned with the ANC, his party, after years of corruption and scandal.

Despite the loss of confidence in Mandela’s ANC successors, many still find hope and drive in his legacy.

We visited the Mandela Foundation and watched a group of South African entrepreneurs look through Mandela’s letters and papers with Verne Harris, the director of archive and dialogue for the foundation.

“This is hard to say, but we have to do better than Madiba, actually,” Harris said. “He gave us a good start, and that whole generation of leadership gave us such a wonderful platform on which to build, but we’ve been twiddling our thumbs for too long.”

Nene said that infrastructure and government issues make it hard for South Africans to focus on healing and building community.

“If your lights don’t work, forget loving people around you. You’re going to be angry,” Nene said.

Solveig wrote this piece as a University of St. Thomas student intern in the spring of 2019 and now works for the Under-Told Stories Project as a production assistant. 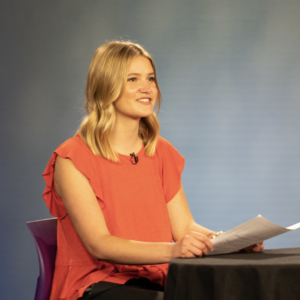 Solveig Rennan is a production assistant for the Under-Told Stories Project. She is from Duluth, Minnesota and graduated early with honors from the University of St. Thomas in 2019. She traveled to South Africa with the Under-Told Stories Project in 2019 and studied journalism in England and the Czech Republic. As a student, she directed St. Thomas’ student-run TommieMedia and won an Upper Midwest Student Production Award and Minnesota Newspaper Association award. She also worked as a communications intern for Ramsey County and a reading mentor at the St. Paul Public Library.