A breakthrough in electronic medicine
Play Story
Subscribe to Stories

Each year, millions of Americans spend weeks recovering from heart surgery and other operations to repair brain and bone injuries.As special correspondent Fred de Sam Lazaro reports from Chicago, researchers are working on a novel approach to aid in that recovery. The story is part of our Breakthroughs series.

John Rogers, Northwestern University:This is one of the devices. Is this the latest design?

Fred de Sam Lazaro:John Rogers has no medical training, but his engineering laboratory at Northwestern University is a pioneer in the emerging field he calls electronic medicine.

Fred de Sam Lazaro:It’s a temporary, or transient, pacemaker that will be laminated like a piece of Scotch tape onto the heart after a patient has had surgery, and it’s controlled wirelessly from a small module attached to the chest.It would replace a far more invasive approach used today, and Rogers says it’s made from elements the human body actually needs.

John Rogers:All of the materials that we’re using for these pacemakers are a recommended part of the daily diet, silicon, molybdenum. Magnesium is what we use for the current-carrying elements.

Fred de Sam Lazaro:And, like many nutrients, when the device’s job is done over a few weeks, it will disintegrate and be absorbed or excreted, illustrated in this time-lapse video filmed by Rogers’ lab.

Dr. Christopher Mehta, Northwestern Medicine:If this device really is successful in what it’s accomplishing, then I think it could be a game-changer for the field.

Fred de Sam Lazaro:Cardiac surgeon Christopher Mehta estimates that he does about 200 procedures a year that require temporary pacemakers. Today’s devices tether the patient through copper wires to an external box, wires that must be pulled out once the heart has regained its normal function.

Dr. Christopher Mehta:So, this wire here has an electrode right there that sits on the surface of the heart. And we just put a little suture to keep it there in place. We have the ability to artificially pace the heart.

Fred de Sam Lazaro:With wires protruding through the patient’s skin, he says, there are inherent risks.

Dr. Christopher Mehta:The risk of infection, because you have something inside the body that is now exposed to the outside environment through this wire.On rare occasion, when we pull the pacing wire, it can cause bleeding on the surface of the heart. And so, sometimes, we have to actually bring the patient back to the operating room in order to correct that.

Fred de Sam Lazaro:The new wireless pacemaker is controlled with the same technology used for touchless credit card payments, for example.The idea for so-called transient medical devices like the temporary pacemaker traces back not to a clinic or an engineer’s lab, but to a military incident involving the U.S. and Iran about a decade ago.In 2011, not long after Iran downed an American military drone over its territory, Rogers says he got a call from the Pentagon.

John Rogers:The vision was that, if an adversary captured a piece of sensitive electronics, it’d be very powerful, very useful to be able to trigger the dissolution or disappearance or disintegration of that piece of electronics.

Fred de Sam Lazaro:Rogers gained the attention, and then Defense Department funding, for research he’d begun into building electronic devices that can self-destruct.And that research took a huge leap forward in medical application when a grad student in Rogers’ lab made a pivotal discovery, that silicon, the foundation material in all modern electronics, actually dissolves in water.

John Rogers:Nobody thought that was the case. Silicon is kind of a miracle material in a lot of ways, because it’s providing the semiconductor functionality in our bio-resorbable devices, but it’s needed for natural body processes as well. So it’s almost like there’s a vitamin tablet element to our dissolvable electronic devices.

Fred de Sam Lazaro:Rogers’ team began collaborating with medical scientists, looking to implant transient devices that can track the recovery from brain injuries, for example, or stimulate nerve regeneration.For the pacemaker, researchers at George Washington University have been testing the device on animals and even a few human hearts from patients who were brain-dead and had earlier consented to be donors.

Rose Yin, George Washington University:We were able to capture the heart rhythm for the human heart on the human scale.

Fred de Sam Lazaro:It’s expected to be at least two years before the new technology gets a green light for live human trials. Despite the promise, Rogers says plenty is still unknown, like what exactly happens to the materials once the pacemaker breaks up.

John Rogers:And those fragments are free-floating. Where are they going? And what kind of risk is associated with that? The FDA has never looked at a technology like this before. It’s totally new.

Fred de Sam Lazaro:The promise is both therapeutic and economic. The new pacemaker would reduce expensive hospital stays, for example. And it would be especially welcome in low-resource settings.Dr. Chip Bolman heads the volunteer surgical charity Team Heart that, before the pandemic, traveled to Rwanda to perform lifesaving procedures.

Dr. Chip Bolman, Team Heart:I can remember a few cases where we weren’t able to get the wires out without risking injury to the heart.And so I think, in a setting like that, where even a regular operation is much more difficult, the opportunity to avoid emergencies, it would be a very beneficial. I think it will be another step in the long trajectory of technology and improving medicine.

Judy Woodruff:Just fascinating. And we can all hope that it works.Fred’s reporting is a partnership with the Under-Told Stories Project at the University of St. Thomas in Minnesota.

Each year, millions of Americans spend weeks recovering from heart surgery and other operations to repair brain and bone injuries. As special correspondent Fred de Sam Lazaro reports from Chicago, researchers are working on a novel approach to aid in that recovery.

John Rogers has no medical training…
but his engineering laboratory at Northwestern University is a pioneer in the emerging field he calls electronic medicine.
This new pacemaker will be laminated, like a piece of scotch tape onto the heart after a patient has surgery…
and controlled wirelessly—from a small module attached to the chest—with the same technology used for touch-less credit card payments. 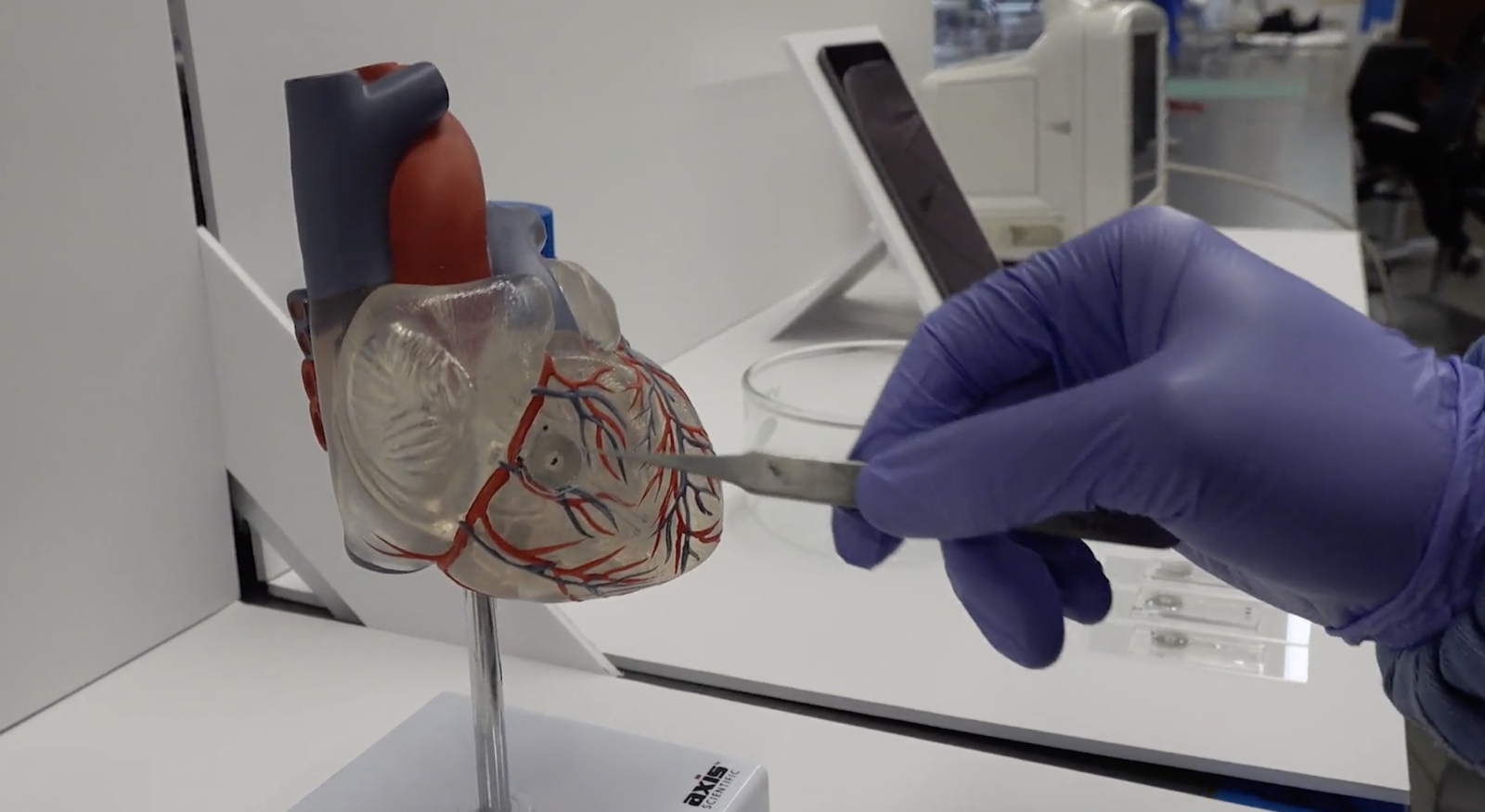