FRED DE SAM LAZARO, correspondent: The patients are often teenagers or barely in their twenties, yet several of them hobble in on walkers to physical therapy. These women suffer from fistulas, ruptures in vaginal, sometime even rectal tissue—a humiliating, even crippling consequence in most cases because of obstructed childbirth.

DR. CATHERINE HAMLIN: They’re leaking urine, and some of them are leaking bowel contents as well.

DE SAM LAZARO: Dr. Catherine Hamlin and her late husband, Reginald, came to Ethiopia in the 1960s as Christian missionaries and founded the Hamlin Fistula Hospital a few years later. A memorial to her husband invokes the Gospel of Matthew.

DE SAM LAZARO: The least of the patients the young obstetricians saw were those with fistula. Amid a lot of suffering, Dr. Hamlin says the fistula patients were especially desperate.

DR. HAMLIN: She’s smelling. She’s poor. She’s got nothing, and she’s an outcast from her whole society, from everything that makes her happy. They lie in bed thinking if I keep really still, the urine will dry up. They curl up in bed. They become stiff. Their knees become contracted, their hips become contracted. They get nerve damage to their feet. The sciatic nerve is pressed on by the long labor, and they’ve got paralysis of the feet. They can’t bring the foot up.

DE SAM LAZARO: Fistulas were common across the world until the early 20th century, when prenatal care and modern systems of delivering health care, like cesarian sections, became available. Today fistulas are almost unheard of in richer countries, but two million women endure them in the developing world.

DR. YETNAYET ASFAW: For me as an Ethiopian, the fact that fistula is happening in the 21st century is not something that we are proud of.

DE SAM LAZARO: Dr. Yetnayet Asfaw works with a nongovernment aid group called Engender Health. She says the big issue is access to care in the vast, impoverished rural areas of this land of 82 million people plus myriad cultural practices.

DR. ASFAW: Eight-four percent live in the rural population, so the majority are rural women, and for rural women the issues are many. Women don’t have access to education. There are also several cultural issues, such as harmful traditional practices. Female genital mutilation is one, early marriage is another.

DE SAM LAZARO: Complications from the practice of cutting external female genitalia and other trauma, like rape, are thought to cause about 20 percent of fistulas. But the vast majority are a complication of obstructed labor, which results both in still birth and permanent injury to the young mother.

DR. HAMLIN: The pelvis of the woman is too small for the baby to come through, or the baby’s in a bad position inside the woman. So my husband used to say it’s either the passage or the passenger. The passage is the pelvis that it’s got to negotiate to get out, and the passenger is the baby, which if it’s not lying in the right position can cause the obstruction.

DE SAM LAZARO: Vaginal and rectal fistulas can be repaired surgically, and Dr. Hamlin, who is 87, still performs many of the procedures, like this woman’s case. We were asked not to use patient names.

DR. HAMLIN: Three days of labor, and then she had a stillborn baby, and then she was left with a vaginal fistula in her bladder. And it was quite—it was a reasonably difficult one.

DE SAM LAZARO: She’s better off than most women here. Many have lived with their injuries for years, too late to be repaired even with surgery. Hospital services are free, but transportation is often unaffordable—if they can get a ride.

So how far away has this lady traveled to be here?

DE SAM LAZARO: Four-hour drive, which for her would mean a bus ride, maybe?

HAMLIN: She would come in a bus, yes.

DE SAM LAZARO: Which sometimes is difficult for them, if they’re…

DR. HAMLIN: Yes, it is difficult, and sometimes the passengers say, “This woman’s smelling. Put her off. She’s got some disease,” and they’ll be thrown off the bus.

DE SAM LAZARO: To offer better access to its services, the Hamlin Hospital created five satellite facilities like this one in the rural countryside. They are funded entirely by donations from governments and private, often church-based donors. Still, only a third of the 10,000 Ethiopian women who develop fistulas every year receive any care for them. That’s why experts say it’s important to shift the focus from repairing fistulas to preventing them. Ethiopia’s minister of health, Dr. Tedros Ghebreyesus says a holistic approach is needed.

DE SAM LAZARO: His ministry has won praise from public health experts for building a network of rural health centers in recent years, with a major focus on maternal and child health. But there’s still a huge shortage of skilled people to staff them.

DE SAM LAZARO: A few years ago the Hamlin Hospital began a four-year midwifery program. These freshmen were studying plastic models of the female pelvis, learning how to detect abnormalities in the fetus position. So far two dozen graduates have gone on to staff regional health centers in rural areas—a small, promising start, says Dr. Hamlin.

DR. HAMLIN: We just have to keep the next generation of doctors and nurses inspired to help these women until it’s eradicated from the countryside, and it can be eradicated and it will be eradicated. In England, obstetric fistulas no longer occurred after 1920, so it’s not so very long ago that fistulas were occurring in England and in Europe.

DE SAM LAZARO: But Ethiopia, like so many developing countries, has a long way to go. Most Ethiopian women today still deliver their babies without the presence of a skilled birth attendant.

20%
of fistulas are thought to be caused trauma like rape or the practice of cutting external female genitalia.

discussion questions
see more educational resources here
But the vast majority are a complication of obstructed labor, which results both in still birth and permanent injury to the young mother.

“She’s smelling. She’s poor. She’s got nothing, and she’s an outcast from her whole society, from everything that makes her happy.” 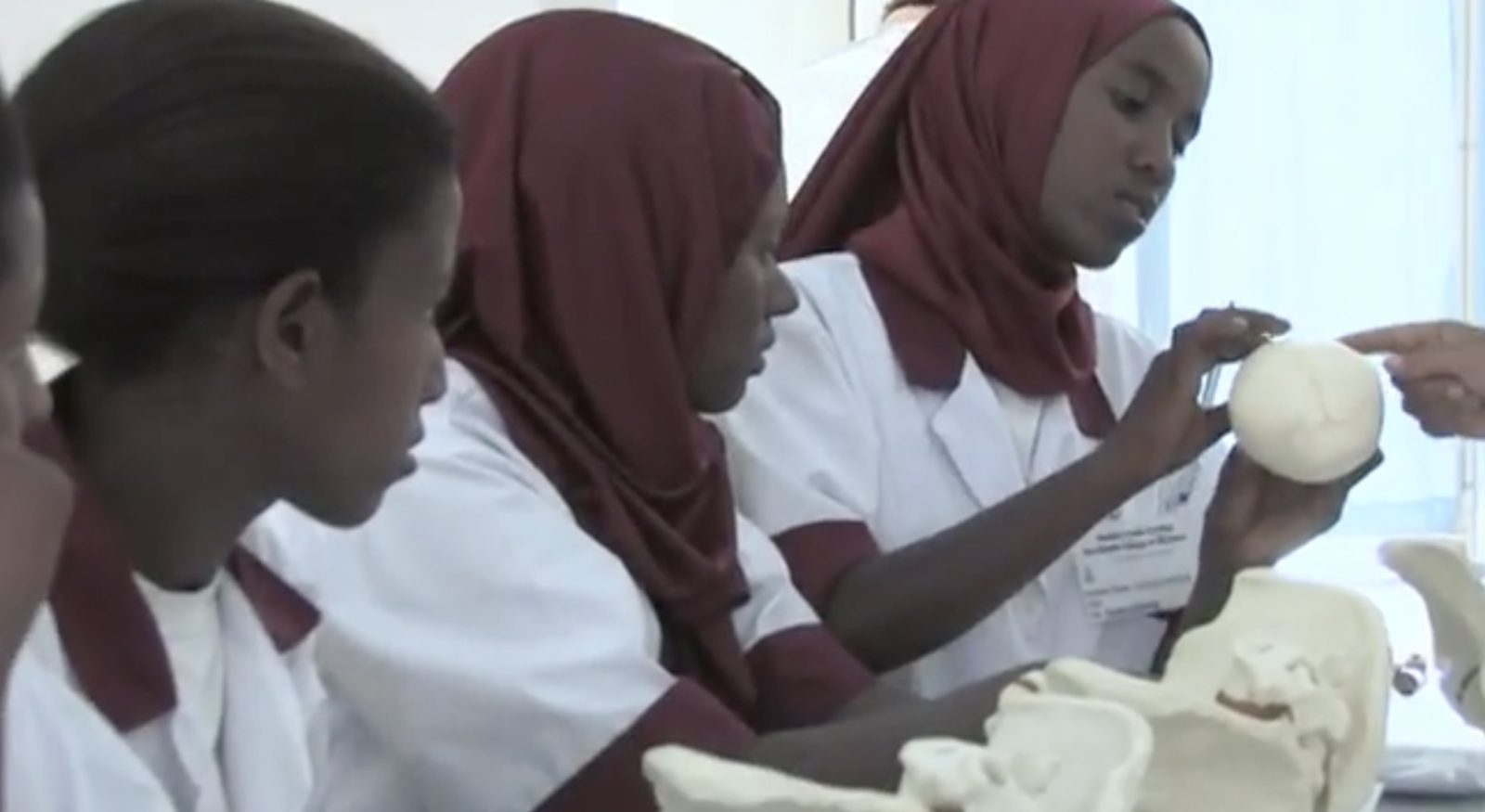 A few years ago the Hamlin Hospital began a four-year midwifery program.

These freshmen were studying plastic models of the female pelvis, learning how to detect abnormalities in the fetus position.